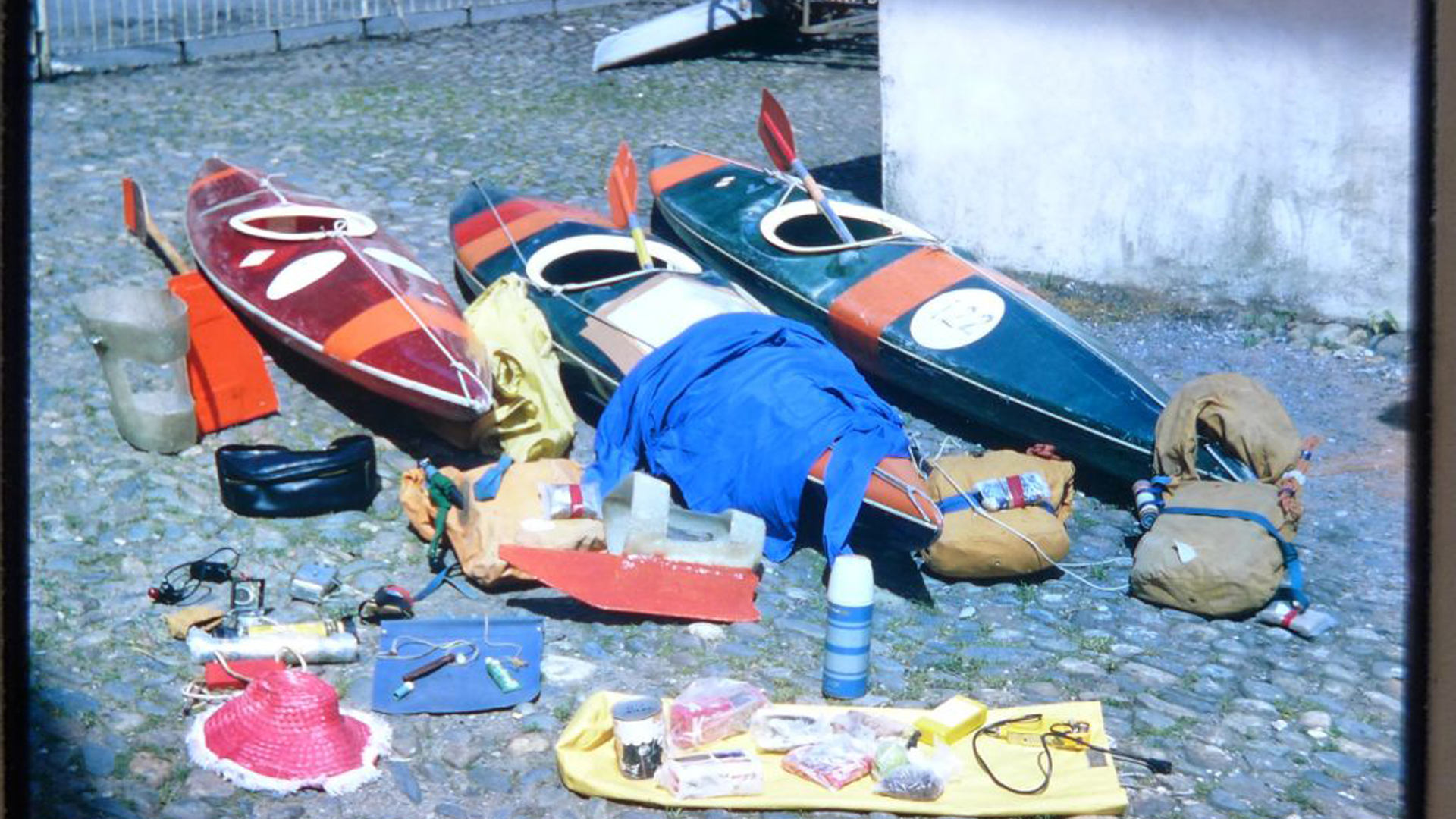 UK Sea kayaking history is littered with adventure and adventurers, not least three young men who set out to make the first crossing by kayak between Dun Laoghaire and Holyhead, back in the summer of 1969…

The following account comes from a recent conversation with one of those paddlers, Derek Mayes.

In the late 1960’s fibreglass was still a relatively new material in the canoeing world. Kayaks made from fibreglass were now the boats of choice on the rivers and, increasingly, along the coastline of the UK. This rigid and robust new material was steadily altering paddling horizons. White-water and Slalom paddlers could be seen more and more with their craft out on open water. They would head out for a change of scenery, or for a white-water fix as the summer river levels dropped.

The Welsh coastline was now becoming a regular paddling venue for some. Bardsey Island, the Skerries and the Bishops and Clerks were among the list of new venues being explored. Different avenues were being explored and new adventures were coming along daily it seemed.

The Irish Sea was an obvious target.

In early 1969 a couple of friends, Ken Rudram and Alan Hughes, threatened a first attempt. Perhaps they may made a mistake however, when they paddled a lengthy training trip around theLlŷn Peninsula in open canoe. It seems that this left them too exhausted to take up their planned Irish Sea crossing when the date arrived not too long after.

The trio were in their late twenties, and while they were all keen climbers, Derek suggests he was the only ‘real’ sea paddler in the team – that is, one who owned his own paddle. Derek had previously worked his way solo along the West Coast of Scotland and was amongst the first to paddle a number of, now common, North Wales trips.

But at this stage, none of the three had experience of long kayak journeys, nor had they prepared specifically for paddling such a distance. They knew each other well and had paddled together through their work at the centre. In September of 1968 Dave, Nick and Derek were joined by Ian Maxwell, when they travelled to west coast of Ireland, to paddle a challenging trip along the cliffs of Moher.

While Derek recalls there was little explicit preparation for the Irish Sea crossing, they did undertake a team-paddling session, a half-day group paddle on Llynau Mymbr, the two lakes by the centre at Capel Curig.

And that was about it.

The kayaks for the crossing were fibreglass slalom kayaks, two (Streamlyte?) KW7’s and a (Klepper?) SL5 – rather different beasts from slalom kayaks of today. 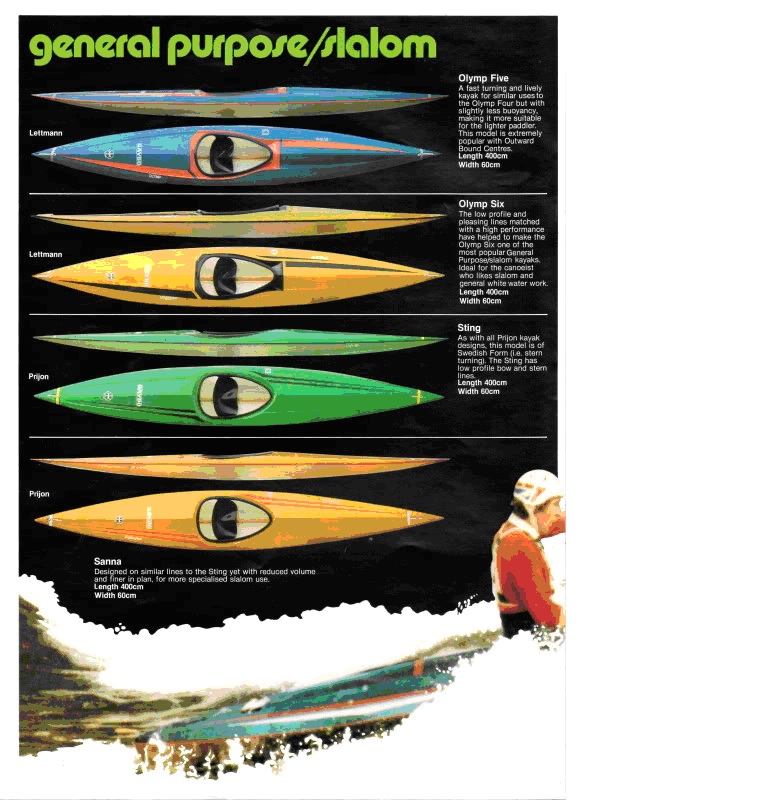 The choice of boats was determined for little more reason than the fact that these were the only ones available.

These boats were also very different from modern sea kayaks. There were no hatches or bulkheads, just polystyrene blocks for buoyancy. Spraydecks were of leaky nylon and dry-bags weren’t around yet. To keep them dry, important items were wrapped in plastic bags and sealed with tape.

The trio did customise their boats a little in preparation. Removable fibreglass skegs were hand-built, to slide over the stern of the boats, in order to aid tracking on the long open water crossing. Single deck lines were strung from bow toggle, via the cockpit, to the stern toggle, for safety…

Again, that was about it.

The team laid all their kit out, told only their close friends that they were off, and ventured onto the ferry from Holyhead. The adventure had started. There was no publicity – no social media…

The Kit they had packed included:

In Dun Laoghaire, as soon as they had carried everything off the ferry, they packed their boats and started to ready themselves for the long paddle back home.

But as they readied to leave, it became clear that they weren’t exactly welcomed with open arms by the locals:

“There was a serious deputation in Dun Laoghaire, lifeboatmen and coastguards, who did their absolute utmost to stop us, even preventing us from embarking from the inner harbour (the only power they had).”

45 years later Derek can understand their point of view a little more readily.

The team ventured to a new launch point and got on the water, setting out at 11 pm.

Derek recalls having read that they could expect to sweat a lot, and of the problems this could cause. And so, to counter the effects of this he took a couple of salt tablets. He doesn’t know if they dealt with the sweating problem, but he remembers that they did make him vomit. For the first hour or two his memories are mainly about the nausea.

Unsurprisingly, 45 years on, he can’t recall all of the details from the featureless crossing. Derek does talk of their navigation drills though; they seem a little rudimentary in the modern world of GPS:

“We spent a long time trying to work out our speed, putting a sweet wrapper on the water and counting until it passed the back of the boat – ever tried that? It keeps your mind busy!”

The position of the sun factored into the navigation plans too.

They paddled well early on, with few breaks. The list of food carried has also faded with the passage of time, but Derek recalls that chicken legs were on the menu, as were Mars Bars – priced, he recalls, at around 4d (not 4p!), back in 1969.

As they progressed and reached the half way mark the air was clear and they could make out clouds in the far distance, hanging over the coast of Wales (possibly Scotland!) – they presumed. Derek admits that they had no idea where they were:

“…anywhere from the Isle of Man to Pembroke, depends on the stream, we thought!”

But things progressed all the same. The weather was kind, there was a constant stiff breeze from the north, and while it was warm, there was not too much heat from the sun.

As they paddled they came across a few ships, but they all remained in the distance and there were no problems with close encounters.

Eventually the group closed on the western tip of Anglesey, dusk was drawing in now and they were feeling the fatigue. They had been on the water for an hour or two short of twenty hours.

As they neared Holyhead, the group picked up the fast stream of the flood tide:

“We tried to stay together in this giant river, always looking towards each other. Nick stopped but Dave didn’t. I went to Nick, he was asleep with his arms inside the spray deck, so I woke him up.”

As Nick and Derek finally reached the sanctuary of Holyhead Breakwater, a SAR helicopter from 22 Sqn thundered overhead, apparently called out by the Coastguard.

Nick and Derek came ashore and fired up a self-heating can of Horlicks for immediate and welcome sustenance. Derek recalls using a red flare to, rather precariously, light the wick of the self-heating can by “firing it into a thick poly bag”.

Then it was off in search of a telephone, to call the coastguard and stand-down the ‘rescue’.

Dave arrived now, he had landed separately and the trio were reunited at Soldier’s Point, tired but excited. The Irish Sea had been crossed by kayak – for the first time.

Derek recalls how worn-out they all were, after over 20 hours on the water. As they drove back over Stanley Embankment (it was long before the A55!), he recalls having to take a second opportunity to awake a paddling buddy. But this time it was Dave who needed a prod, and he wasn’t paddling, he was driving the car!

They took the following day off work.

Derek looks back now, with obviously fond memories of the trip, of the adventure and the accomplishment. There were to be many more paddling trips, but this one stands out.

He sums it all up:

“It never seemed like a big thing but I am really glad we did it.  It helped me face quite a few situations in the following years – just drawing on that commitment alone. It was committing, we knew that, but we were entirely ready.”

Derek still firmly clings to his old slalom boat. He has owned and paddled various sea boats over the years, but he prefers the company of his faithful Olymp 5 for salty paddling days:

“What else can you lift from a car on your own, or turn ’round briskly in a tight cave, perhaps carry over a headland in appalling wind and darkness? At 75 there is NO way I could lift a sea boat on and off my car, though I like to think I’m as strong as ever!” 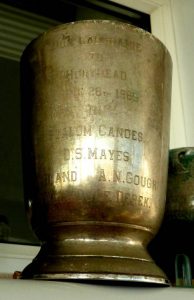 Nick’s father later presented them all with an engraved pewter mug to commemorate the historic crossing – Derek still cherishes his.

Dave Bland was killed in climbing accident in 1975.

Derek now lives in Orkney and continues to paddle his slalom boat on the sea:

“…round headlands, and out to islands.”

Thanks to Derek Mayes for his help, and patience.
Images copyright Derek Mayes.