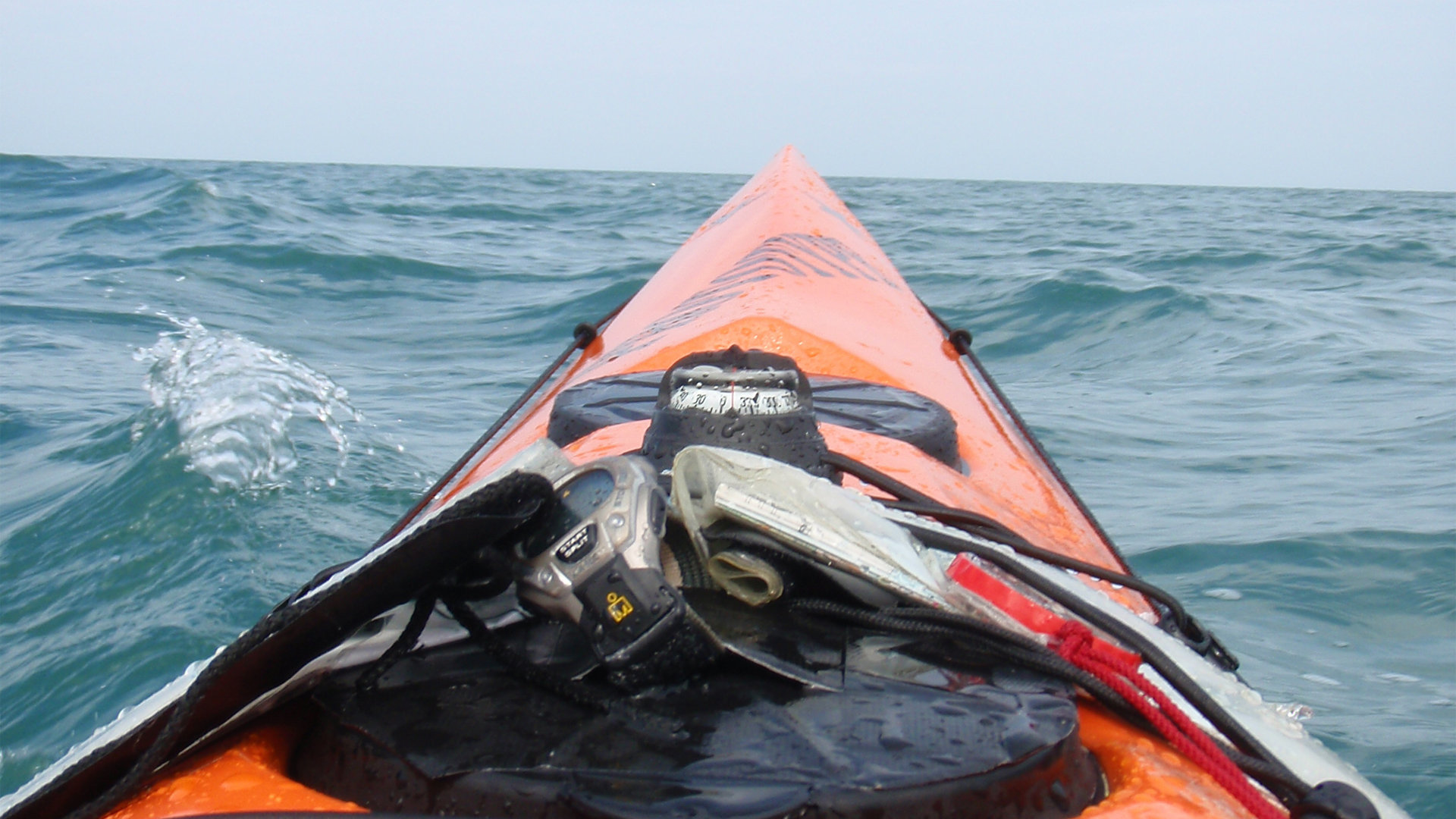 According to the family photo album I had last visited the Isle of Man in 1978; I had always wanted to return to see a little more of the island, it just took a little longer than expected. Of course life had moved on in the intervening years, I wouldn’t be using the ferry to get across this time…

Unsurprisingly I can remember little of my previous visit. One thing had always stuck in my mind though: just how clear the water was when looking over the edge of the Douglas prom – I could see the bottom! This was unheard of in Morecambe Bay, unless the tide was out.

I also remember a rollercoaster return ride as the ferry battered its way through a stormy Irish Sea. This time I was hoping for better weather for the crossing.

After reading Jim Krawiecki’s blog about the crossing he and Sean Jesson made from St. Bees I was inspired to put the long overdue plan into motion. The years were slipping by and it was time to catch up with a few things, the Isle of Man crossing had to be one of them.

After a good winters training I was itching to give it a go. Likewise the new prototype Rockpool Taran sea kayak needed to earn its spurs on a decent crossing. The two were made for each other!

The spring brought unusually lazy high pressure systems and prolonged calm weather; unfortunately I still needed a few more miles under my belt. Hopefully the weather could hold out just a little longer.

And then this was it! Things felt right and Friday looked like the day. The plan involved a paddle from Anglesey to the Isle of Man with a return on the ferry back to Liverpool the following day, taking the soft option.

For the most part the tides would be pretty much running across my track as I headed north, so I didn’t expect much help nor hindrance. The plan involved running on a heading pretty close to north throughout; the tide should take me just over 4nm off to the west initially and then bring me back onto track for the finish – hopefully. The aim was to arrive around local slack water to make the last stage a little less stressful. The forecast was for gentle southwest winds blowing around 10-12 mph or so, a little breezier nearer to the Isle of Man so that should help a little too.

Taking the crossings of previous paddlers into account, my original aim was to reach Castletown in less than 10 hrs, perhaps 9:30. After a few calculations it looked like even this could be bettered. The distance was pretty much 40 nm straight line but with an easterly drift of 4 nm or so this would lengthen the total to around 41 nm. It seemed surprising that a drift of 4 nm would only add around 1 nm but Pythagoras confirmed it – though I was still a tad sceptical, what did he know about sea kayaking? So taking the distance of 41 nm, I would need to average 4.4 kts to better the 9:30 hrs mark – possible. In fact an average of 4.6 kts would just beat the 9 hr mark; I felt I could achieve this as a moving average but as an overall average with stops, tides and weather thrown in? Not sure. Either way it was a good mark to aim for.

And so I found myself standing on the gravel beach at Cemlyn Bay peering out into the haze. There was 40 nm of water between me and my destination and I was already twenty minutes late as usual!

The boat was on the water’s edge, loaded and ready to go. There was the usual last minute indecision over just what to wear – my cag clashed with the orange deck terribly! As I changed into my paddling kit it was getting warm, the high level cloud looked like it was clearing and the sun was trying to poke through. Nice one – dress for sunshine!

The GPS was ready to roll, drink and food at hand and coast guard had been informed. As the boat scraped free of the gravel I started my watches and we were off!

Before I had left the bay the sun went in, it wouldn’t reappear for the next 20 miles or so – bugger!

The plan wasn’t exactly rocket science; paddle north out of Cemlyn Bay and just keep going north until I hit something large and immovable. Hopefully it would be the Isle of Man and not the south of Scotland.

I had expected the faster tides around Anglesey to exaggerate my drift initially, anticipating that things should settle down as I moved further out from the island. But as I paddled out I found it rather disconcerting to see how quickly I was drifting westwards, the Skerries seemed to be getting very close! Have faith and keep going…

The forecast south westerly breeze was more of a westerly this close to the island and the splash off my paddle was going straight into my ear with every stroke, charming. It’s the little things that can get on your nerves! Hopefully the direction would change to the forecast more southerly as I cleared the island.

Soon I settled into a good rhythm as Wylfa power station slipped sullenly into the haze behind me. The routine was fifty-five minutes on, five minutes off with a radio call to the Coastguard every couple of hours – just so they would know where to start looking…

The miles were slipping behind nicely and things felt good, though the drift westwards was a little more than that planned. My spraydeck also seemed to have sprung a leak, not much I could do about that I suppose, but why now? A wet bum all the way to the Isle of Man, hmm… nice.

I was about 9 nm out when a small freighter appeared ahead, she changed heading a couple of times to see just what I was doing this far off shore but then went on her way. It was heartening to see the GPS showing an average of 4.8 kts.

At about 15 nm out Anglesey finally disappeared behind me and I was on my own. There was nothing to see but water and the gloomy haze. The pace was still holding up with the average displayed as 4.75 kts giving a projected finish time of 8 hrs 44 mins, good stuff.

This is a busy stretch of water for vessels heading for Liverpool so I was keeping a slightly nervous lookout. As a rather insignificant orange (not my choice) dot I was not going to win any game of chicken out here. Even so, the Seatruck ferry managed to appear in the style of Mr Ben’s shopkeeper and gave me a bit of a scare. How can you miss something that large? But I had; a quick change of pace was needed. Again she changed heading to check me out, always a little unsettling as you don’t really know if they have seen you or are just head down while they check their Facebook page!

Some days things just feel good and luckily this was one of them. The boat was ticking along nicely, the pace was good and I felt like there was more in the tank. Those dark winter nights in the Swellies had been worth it after all. It was still a little worrying to watch the drift readout on the GPS, had I made a serious mistake with the plan? Was I really heading for Dublin instead?

By the half way mark I still could not see any sign of land; I had also drifted just short of 5 miles westwards, a little more than I expected. Have faith…

Things were also getting a little choppy, the breeze had not strengthened too much but the longer fetch meant things were building up a little. I was not paddling in much of a rhythm now as I constantly altered my pace to match the following sea. On the upside the sun was finally out and things were still going rather nicely all said and done (other than my wet bum).

It was well after the half way mark when my westward drift finally stopped. It stubbornly remained like that for a couple of miles but then finally reversed and I was drifting east at last – phew! But it all seemed a little late in the day now to get me back on track. Was it time to tweak the compass heading? Doubts sprang into my mind but I needed to believe in the compass as well as the plan (and to hope for the best). As I contemplated compasses and headings I passed a trawler which broke the feeling of loneliness for a while. The tide was now a little more in my favour, a quick look at the figures and it looked as if a sub 8:30 was possible; hmm… time to pull hard.

It was over 6 hrs now since leaving the beach at Cemlyn Bay and I was starting to tire a little, but the 8:30 carrot hung enticingly ahead. The sea was building and I was starting to catch a few surfs, but between the waves it was difficult to paddle with any sort of rhythm. My bum was still wet.

But there it was at last, after a few false alarms I could finally make out mountains through the haze. Soon the coastline was visible, not far to go now. But of course it’s always the last few miles that take the longest. I got a little confused as I tried to make out which was Castletown and the speed started to drop off as I closed on Langness Point. I seemed to have found an eddy and it was taking forever to get into the bay.

Sod it! There’s a gap in the rocks over there, I’ll walk to Castletown for tea. And so I scraped up a narrow rocky beach at Scarlett Point – the watch showed a time of 8 hrs 21 mins since I left Anglesey and the GPS showed a distance of 41.37 nm covered. The overall average speed was 4.96 kts – not bad for a first attempt. It had been a long day but I was pleased with the pace and the way the Taran had handled.

Now off to Castletown for something warm to eat – on foot!

The following morning I pottered gently up the coast to Douglas, taking in the cliffs and coves on the way. I headed for a sunny landing on Douglas prom. After rather precariously carrying the boat up the steps I sat in the sunshine as my kit dried on the wall looking like some sort of water borne tramp.

Peering over the edge, the water was still as clear as I remembered all those years ago.

The ferry terminal staff were a touch surprised when I carried the boat into the building, then I suppose you would be. But soon a plan was hatched and the boat was carried down the ramp and onto the ferry. The conditions were near perfect as we left Douglas; I couldn’t help but feel a little jealous. They weren’t so nice when we entered the Mersey though, a strong headwind kicking up the chop. I was glad I hadn’t had to paddle through that lot, though I couldn’t understand why there so many people braving the chill wind to stand in the water on Crosby beach.

Soon it was time to carry the boat up another ramp only to find myself stood rather incongruously amongst a group of tourists looking up at the Liver Birds. Most had cameras over their shoulders, I had an 18ft orange sea kayak – each to their own I suppose. Oops, I had overlooked the fact that the ferry landed in city centre Liverpool.