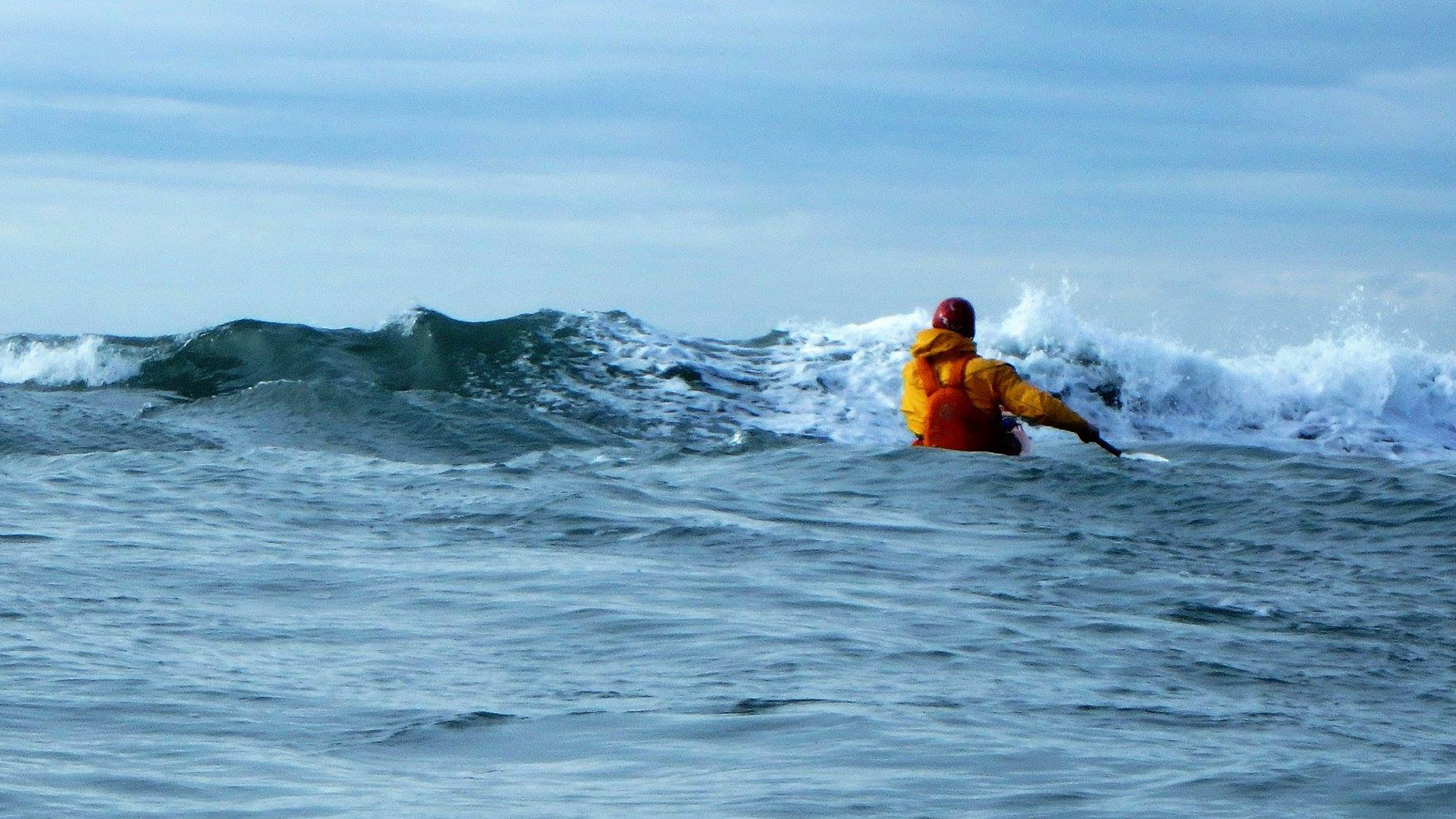 This rather frank and honest article comes from Dan McGonigle. Dan has a lifetime background in sea and surf paddling; more recently he has become known on the UK scene for his 2015 circumnavigation of Ireland with Steve Miles and latterly for his two 2016 circumnavigations of Anglesey – the first with Jonny Eldridge and the second solo.   PSK

I have thought long and hard about a suitable subject to write about and decided…in the end to show a little skin. Something that I have struggled with over recent years is my Mental Health, more notably in the form of depression. So why not write about my experience and how it relates to my paddling and vice versa. Hopefully it will be received well and might help those paddlers in a similar place to where I was, only a year or so ago.

The Ireland Trip in 2015 was the turning point…but it was only after months of living back in the real world that I saw the real value of our big circle. The circumnavigation began with an inherently narcissistic motive, thinking about how people would see me after we had completed it. But long days on the water, chasing headlands in marginal conditions forced me to think. The importance of how I was perceived in the eyes of others dwindled and the importance of my own self-worth began to shine through.

When it comes to the subject of depression and mental health we as a society are very closed off. There is a stigma that surrounds it and people tend to put you into a proverbial box (Or at least it felt that way). The systems of support are inherently flawed…so much so that to actually get some real help, you either have to pay through the nose, be on the absolute edge or have already passed the point of no return.

This lesson was driven home hard during my last year of University now 3 years ago.… The pressure had built up due to workload and I didn’t understand the way I was feeling until I was close to my limit. I went in search of help, in the form of my GP….. I left that appointment feeling even more confused but I had medication so everything was ok (sarcasm). I Struggled on…just about graduated and went into working life still unable to process my feelings. I would go through bad patches and people kept on asking me the same question. What’s your trigger?

A trigger is loosely described as something that sets the negative cogs turning within the brain. Someone once explained triggers to me by getting me to imagine the mind as a train station. Visualise now, the busiest train station that you have ever been in…. No people…just Trains. Each train that comes in is a thought…It stops at the platform and in a matter of seconds is gone again.

These trains come carrying all sorts of cargo and head down some very dark tracks. My negative train seemed to arrive when I felt directly responsible for messing something up…. Somehow ending up on this “Self-Critical” track heading to the next station that was full of similar thoughts. Once this process begins it is very hard to stop and I would find myself hours later in a really low mood and in a very different station to where I began. I could feel myself getting on the train but I simply didn’t know how to get off.

That is where paddling comes in.

“Relentless, repetitive self-talk is what changes our self-image.” – Denis Waitley

Expedition paddling, especially the kind encountered on a trip like Ireland, where time and daylight are short, definitely couldn’t be deemed as fun. It’s an uncomfortable, repetitive and inherently arduous experience. Pressure sores, blisters, chafage, sun burn and crusty eyebrows are not what any normal person would think of fondly. This can only really be categorized as type two fun…the kind that is enjoyed later…in a masochistic sort of way. At the time however the individual has to numb themselves to the pain and boredom of watching a headland that just doesn’t seem to be getting closer. Everyone will react differently…but generally the bigger questions in life rear up and come to the forefront of the mind. Inevitably leading to reflection on one’s own life. This was an important thing for me to grasp and the idea of challenging my own thoughts became more appealing than daunting.

I realised…after succumbing to the boredom and accepting my thoughts for what they were, that my triggers where simply due to over personalisation. I would get really involved in things because I care and when they don’t work for whatever reason I see only myself to blame. This was the train…Now how do I get off it earlier or, even better prevent myself from getting on in the first place. The Answer, for me at least, is time spent thinking. Now don’t get me wrong, sitting in a room staring at a wall isn’t what I’m getting at. I mean Proactive and Constructive time with my own thoughts, where I can face my demons. This happened every day of the trip in some way, shape or form. Experiencing my whole bandwidth of emotions in a matter of hours.

Post trip I found that actively trying to recreate a long day on the water is difficult, given jobs, and life in general seems to get in the way. This being said I found it was possible to get little fixes. Like competitive runners and cyclists and with advice from John… I decided to see my kayaking as a form of training as well as recreation. As I work beside a lake, I partially get my fix by having dedicated training sessions…roughly 4 evenings per week against the clock. Structuring the sessions by using set goals, timings and heart rate mean that what may seem to some, as a mundane lap-fest actually has a purpose. Giving a session purpose and structure gives me a chance to replicate the conditions that encourage thought. I found, that this combined with my normal recreational paddling helps to both keep me motivated and active.

Getting out on the water, sea or lake, no matter what the weather, stops me getting on that train. By recording my own times I can compete directly against myself and no-one else, not an ego booster, simply a constructive way of tracking progress, both physically and mentally. These sessions provide that valuable time where I can process any thoughts that have niggled at me during the day.

A really significant place for me over my whole struggle with depression is the Menai Straits and Telford’s bridge. I used to go and sit on Church Island to try and process things. The turbulent water that can be found in the “Swellies” is daunting to an untrained eye. Its waters, build and die, in surging, boiling confusion but yet an underlying feeling of predictability shines through. I didn’t know it… but it showed stark similarities my struggles at the time.

The water moves in set ways around defined obstacles, as different on the ebb as it is on the flood. To a novice paddler heading into the area it can be overwhelming…flat one minute and fast moving water the next. Over time however you become used to this confusion…you plan for it, read the water, use it and expect it…rather than battle against the tide all the time. This paints a true representation of depression in its stages, as at the beginning of the process we get confused and fight the flow, not knowing how to effectively read the surge of emotions…over time however we build up a knowledge of our thought process…where the eddies are and the exact time and place where the flow of emotion will be strongest. At this point we can choose to play in the flow rather than fighting it….embracing the surges and learning. The more time spent here playing and exploring with different levels of emotion gives a greater understanding into how we process our thoughts.

Depression and everything associated with it can be overcome. The one key thing to remember is, at the end of the day, it is up to the individual to take their wellbeing into their own hands. Don’t hide it but embrace it and play in the flow. Find out what your triggers are and what settles your mind. When that level of understanding is reached, a better, stronger individual will be created. I still have low days and I still suffer from depression, but that’s ok. I can live with that. The important thing is that I can catch myself before I fall. If it wasn’t for slogging around Ireland, sea kayaking and the sea in general I fear that I wouldn’t have anywhere near as much clarity.

I would still be stuck on that train…unable to get off, stuck in the flow….battling a building tide. This is how paddling has helped me deconstruct and process a very rough part of my life. I want to inspire anyone (Paddler or not) who is currently where I was, to actively look after their mental health and to see, that at the end of the day… recovery begins and ends with you.