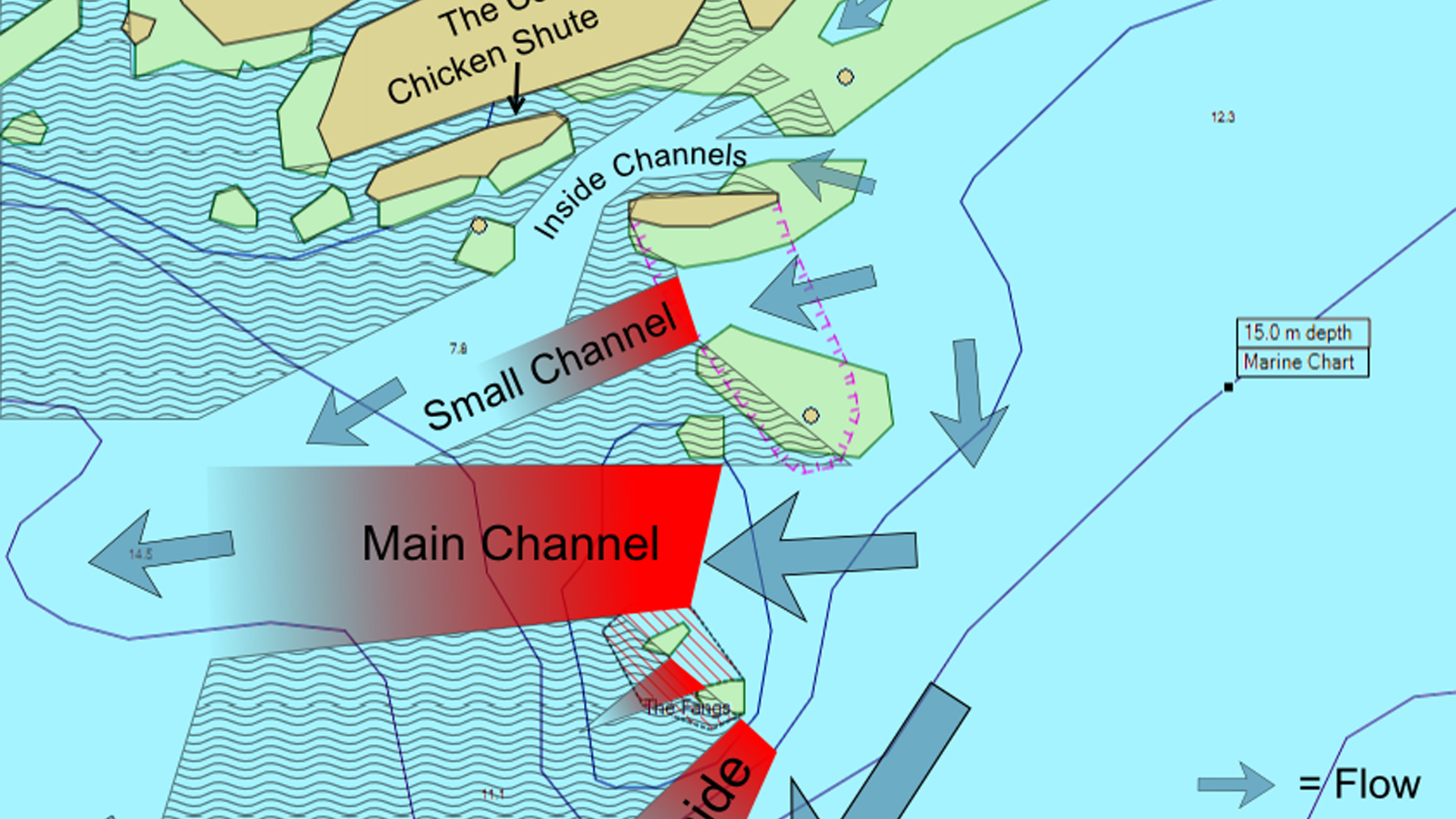 Penrhyn Mawr is arguably Anglesey’s best sea kayak play-spot. It is easily accessed, lying only a short distance off the coast of Anglesey. This is potentially a complex, weather and tide governed trip that includes kayaking in areas of strong tidal currents. Perfect for practicing rough water techniques and playing in waves, boils and eddies; however, in poor conditions this can quickly become a very confused and treacherous piece of water. Paddlers should be aware that they would be taking on the most powerful force of nature found on the Anglesey coastline, prepare themselves accordingly and adopt a defensive mind-set when playing in this location. 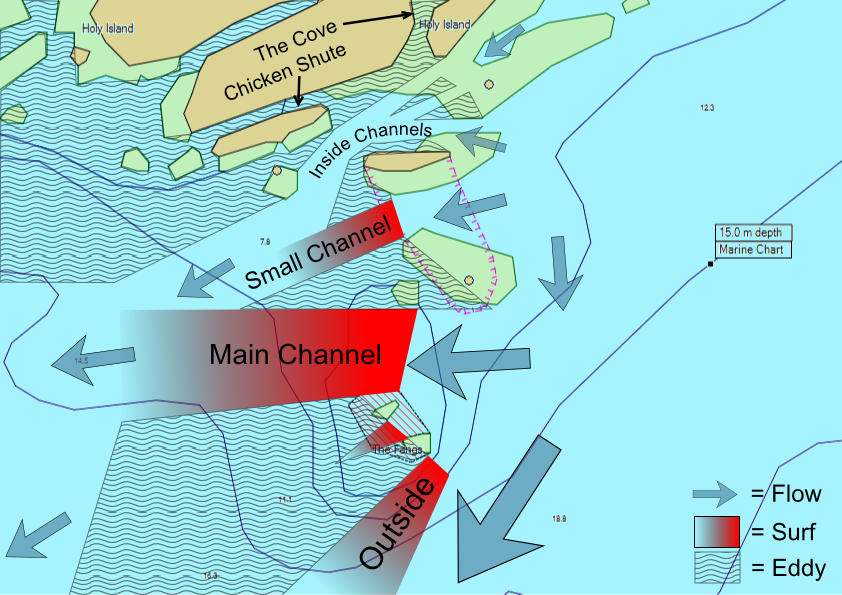 Launch from Porthdafarch beach at low water and paddle the 1.2 nm in a westerly direction to Penrhyn Mawr (keep land on your right!).

Pass Mackerel Rock after 0.4nm, be aware that this is a popular fishing location – avoid the flying lead weights by keeping out of casting distance, approx 200m.

Continue to Gull Island (0.7nm from beach), a small rocky islet 10m off the first major headland. This small rock will give you a good indication of conditions to come.

By now, you’ll probably feel the pull of the tide sweeping you towards Penrhyn Mawr which lies around the corner.

Now is decision time – the overfalls are 0.5 nm ahead, approx. 5 mins away. Paddlers experienced at Penrhyn Mawr may press on and commit to the Main Channel (left of the off-lying rock) and drop straight into the waves. More prudent paddlers will opt for a safer and gentler introduction by hugging the coastline and approach via the Inside Channels. The intermediate option would be to drop through the Small Channel and break-out immediate right into the large eddy behind the rocky islet. Beware of the short shallow reefs guarding the sides of this channel – they can be particularly tricky during a large swell.

Best play conditions at Penrhyn Mawr happen between low water and mid-tide – at these heights, the streams and eddies are well defined, and refuge may be sought downstream/behind rocks. Between mid-tide and high tide, the streams become less defined, and the eddies ‘more boily’ – eventually, at high tide most of the rocks cover up.

The area called the Inner Channels can be used for ferrygliding and general practice for moving water skills.

The Small Channel is surfable when in good condition – it has a safe and defined eddy on the shoreward side, the outer eddy can be a little confused. This Small Channel is approx. 20m wide and can be ferryglided quickly – a short wave train moves upstream against the flow of water. The waves here can be relatively steep when there’s swell. The Small Channel provides plenty of challenge when conditions are heavy or too intimidating in the Outside and Main Channel areas. 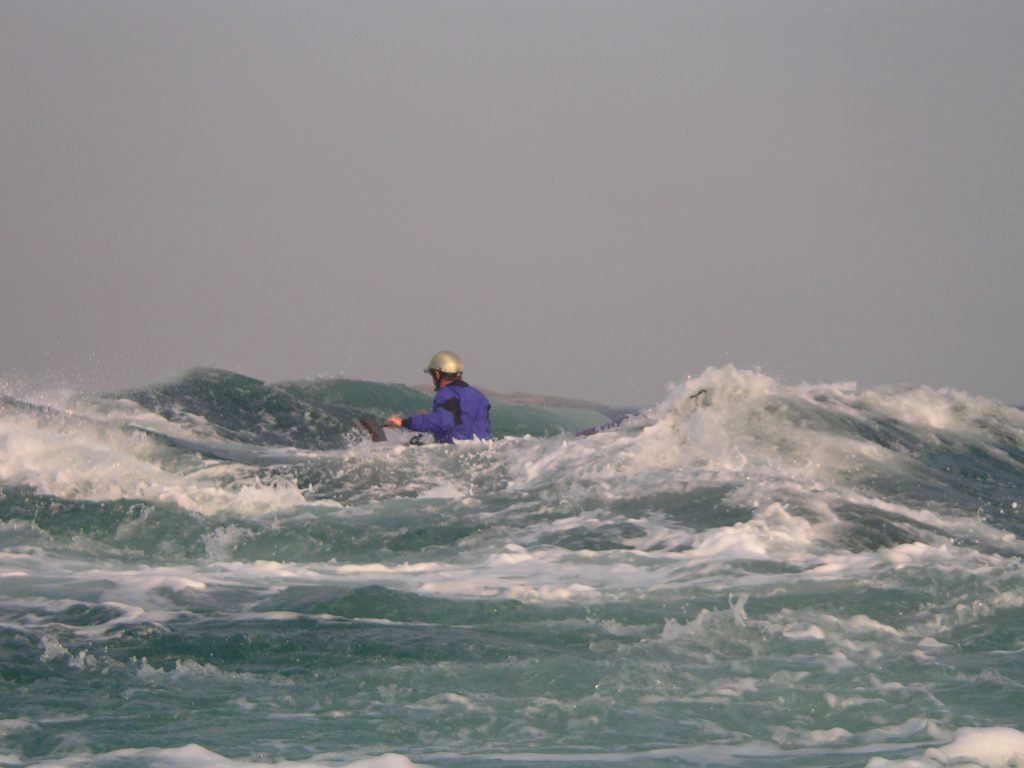 The best surfing conditions are often found in the Main Channel. This Main Channel flow is over 100m wide, and during ideal conditions the waves span the width of the channel. Again, waves travel upstream against the flow of water – a paddler would position themselves downstream and surf their way up to the head of the wave train, then drift back on the tide and repeat the process.

Staying out mid channel will test the endurance of any paddler, rest may be sought in the eddies to the side of the flow. The cleanest surf waves are found at the top of the wave train, closest to the approaching flow of water – it is advisable/desirable to stay in this top area to maintain short clean surfing runs.

Alternatively, if a paddler slips back too far down the flow and out of the best waves, the shoreward eddies can be used to regain lost ground. 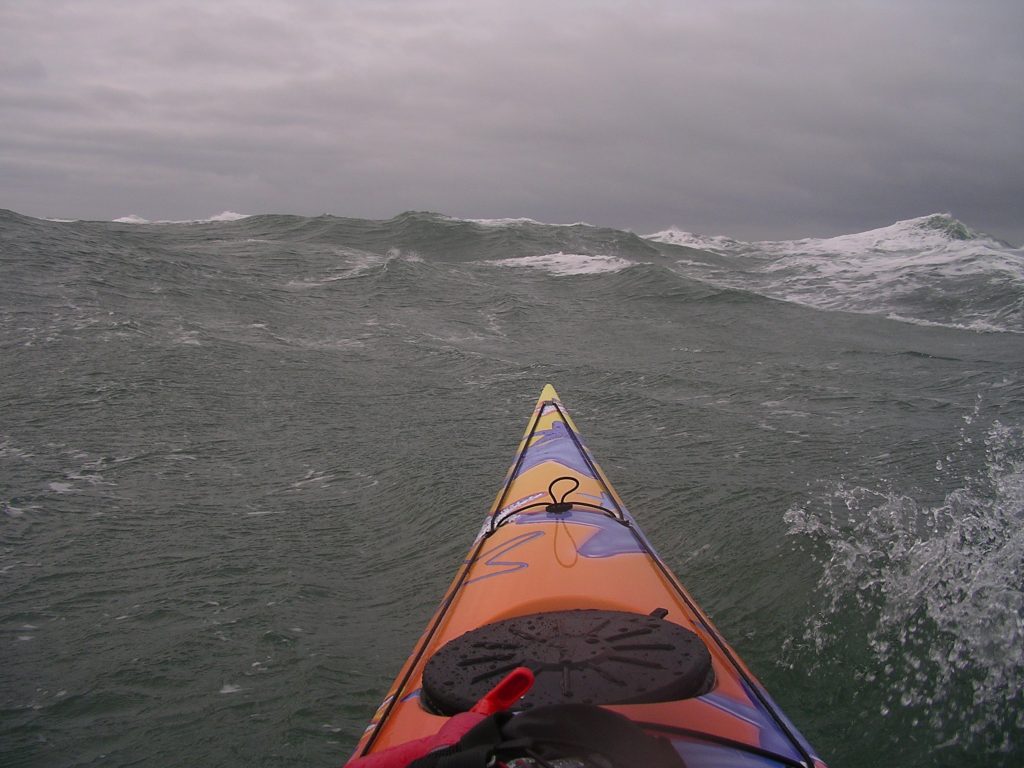 The Fangs lie semi-submerged beyond the Main Channel, and mark the beginning of the Outside. Some sport may be had around these rocks, but be aware of swells when the rocks suck dry. There is an eddy behind the Fang rocks, even when they are submerged, although it feels a little exposed.

Surfing waves may be sought Outside, especially if the Main Channel is busy with paddlers – this area should be used with care, a swim here will take you out to sea!

Rest and recuperation may be sought in The Cove – it lies to landward and behind/to the side of the Inside Channels and accessed through a narrow short passage through the cliff face. Inside this lies a pebbly beach – the perfect lunch spot and sun trap. Beware the entrance to the passage during strong flow, it is guarded by a particularly nasty boil which has to be crossed – this is probably the most technical manoeuvre of the day!

An alternative landing would be in Porth Rhyffudd, 300m east along the coast, although this lies upstream of the overfalls and would require the paddlers to fight the tide to gain its haven.

The Chicken Chute is often used by paddlers travelling from South Stack to Porthdafarch against the tide – it cuts off having to paddle against much of the tidal area downstream of the Inner Channels.

After a few hours play, a route back through the Inner Channels may be found against the remaining tide. Following the cliffs back to Porthdafarch would keep paddlers out of the opposing tidal flow.

The ebb stream misses Penrhyn Mawr completely as it deflects away at South Stack.