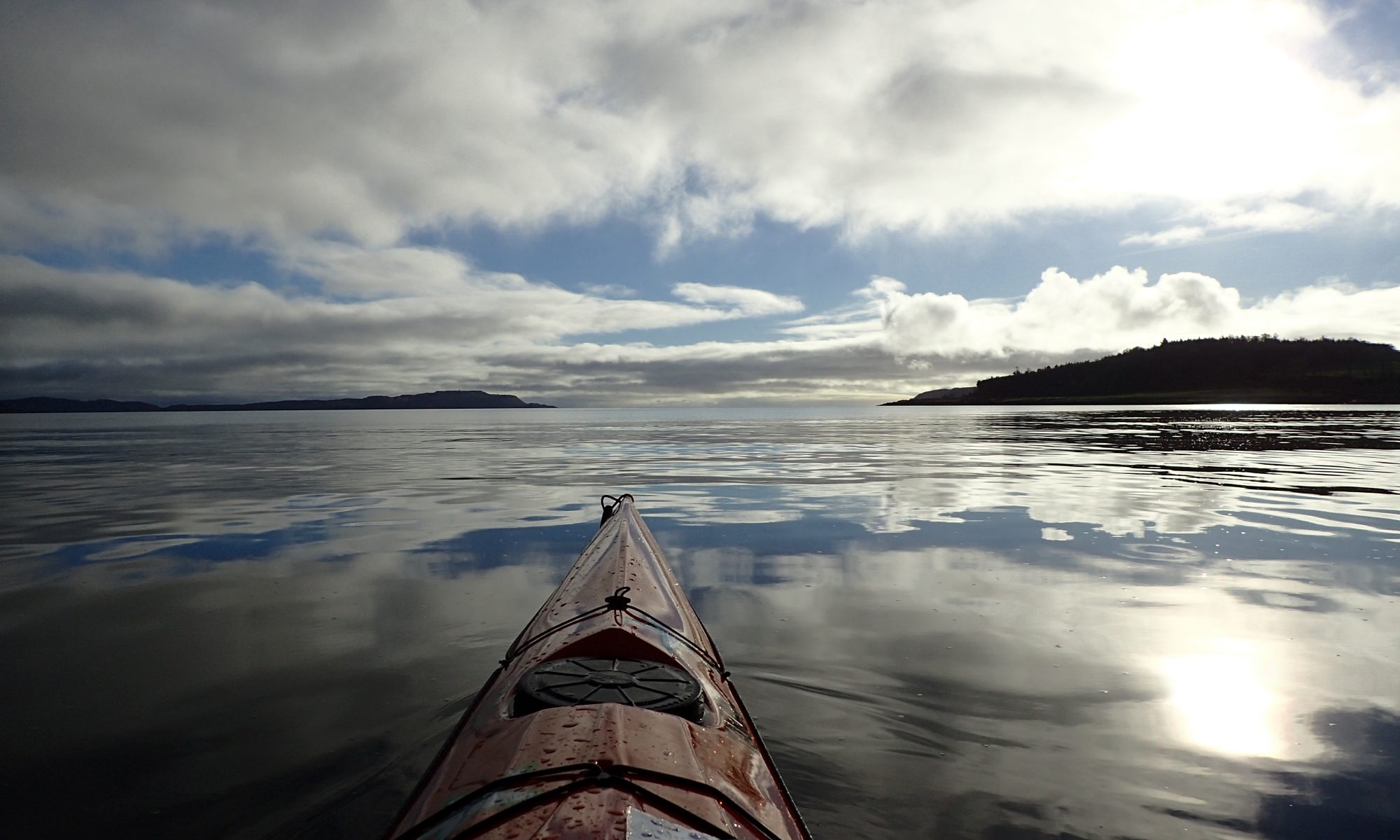 I paddle around islands, I like the challenge of researching and planning the tides, in order to get around as quickly as I can. It’s what I do.

Part of the 2021 plan was for a team attempt on the Isle of Bute record, my partner (The Boss) and myself paddling together. A 58 km and, hopefully, 7 hr paddle.

The Isle of Bute is another of the UK’s ‘single-day’ islands. Short enough to get around without taking a chunk out of your life, but long enough to make them a challenge – especially when you try to push the limits on the time.

Bute lies west of Glasgow, Scotland’s most populous city. The scenic isle lies hidden in the north of the Firth of Clyde, surrounded by impressive scenery, and with a ferry ride (or two) to get there there’s a hint at of a little ‘remoteness’ about the place too.

For The Boss it was to be the main paddling goal of the year and so she set to early on, clocking up the ergo miles during covid-lockdown and later continued her K1 paddling development on the lake and then open water and moving water work too. As the season progressed she steadily clocked up the longer distances in the Taran. All the time gaining famil with the admin and skills needed on long paddles, learning the psychological games of how to just keep those arms going around. I watched from a distance, smilingly impressed.

Along the way we teamed up for a couple of progress goals of course: first was a 3hr lap of Walney Island in Cumbria, where we set a new team record, and then a month later we paddled a pushing-the-limits choppy lap of Holy Island, Anglesey – which didn’t. However confidence grew, for both of us.

For me, my main 2021 aims were a lap of Skye and then a reprise of the Isle of Wight record. These combined with laps of Anglesey, Holy Island, Walney and Hayling Island, meant I didn’t really need to work up to the Bute attempt, it was more about hanging in there as I grew ragged at the end of a long season.

Unfortunately spring tides, good weather and life in general didn’t come together as we hoped for a September or even October attempt. The clock was ticking , daylight hours were getting short, people were even talking of Christmas!

By early November we were starting to think we had blown it, but then suddenly there was a one day gap in the weather, or so the Met Office rather unconvincingly promised. With nothing to lose, we went.

It didn’t look encouraging as we headed north along the wind and rain lashed motorway. Even less encouraging was Wemyss Bay where we found the Bute ferry cancelled due to bad weather. We were due to paddle the following day… 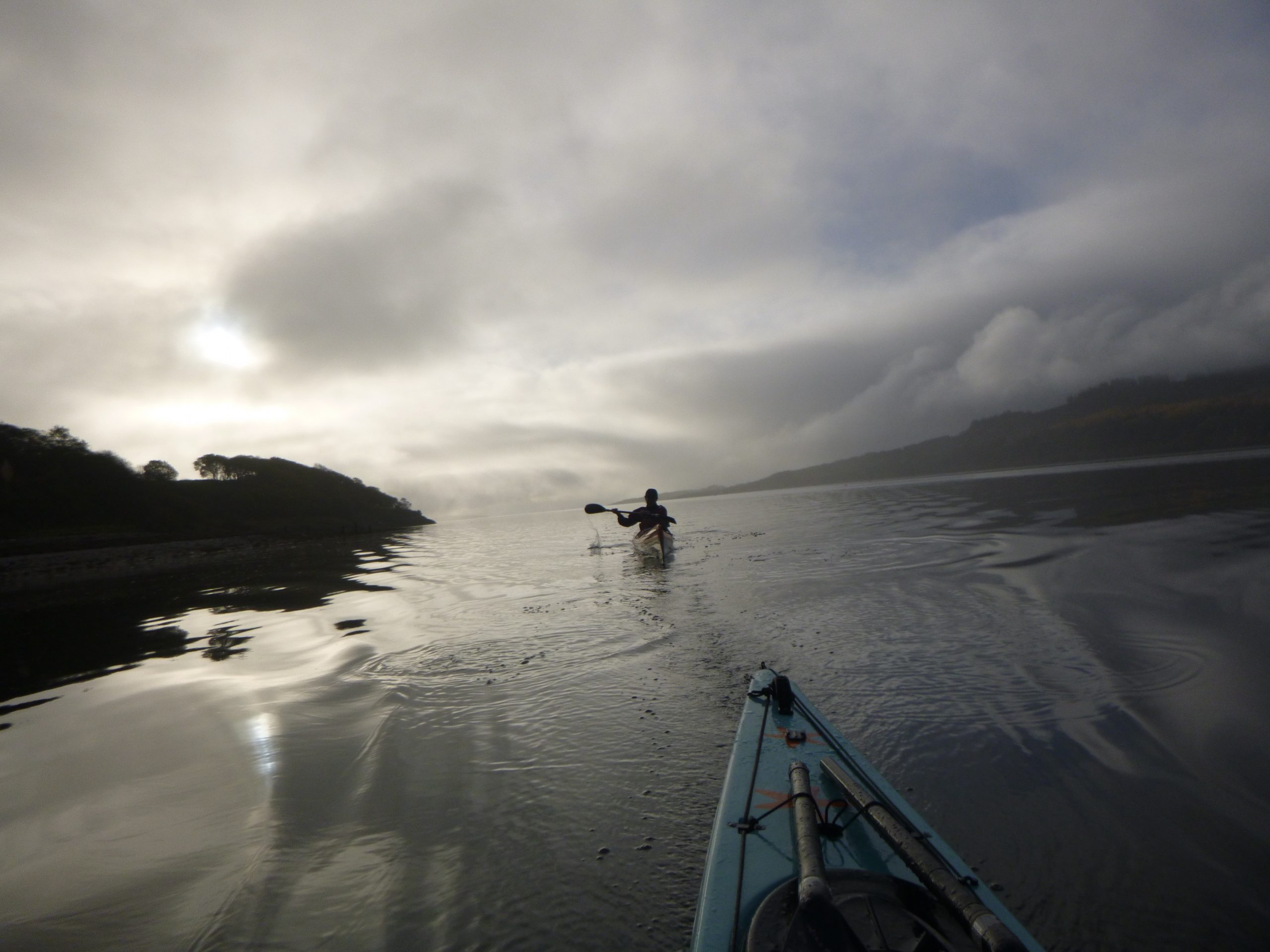 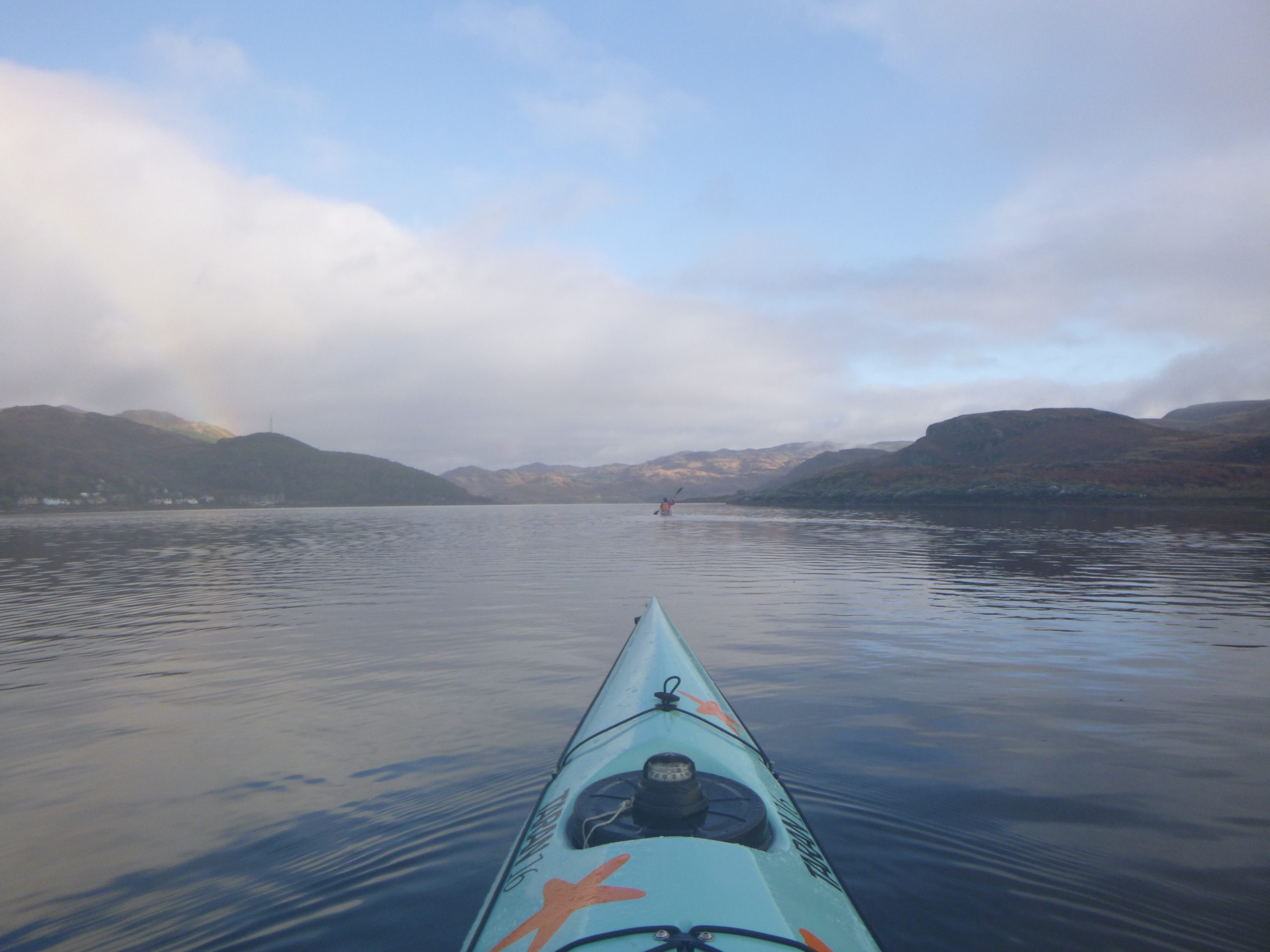 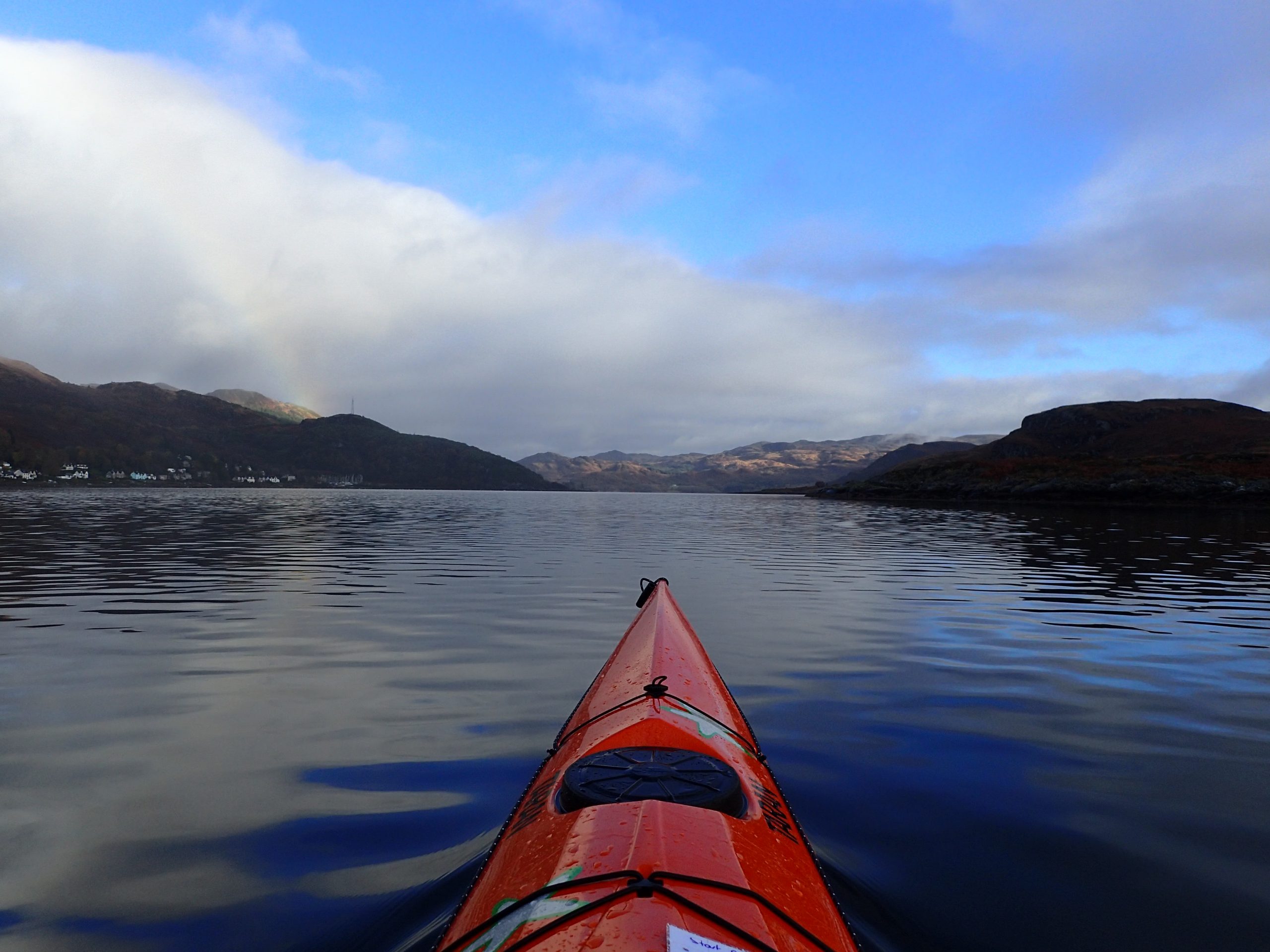 However we finally made it across, and though the day dawned a little slowly, the Met Office were true to their word. It was calm as promised.
Our start location was planned not for the usual of optimum tide or crux points, but just to get the best from the daylight hours. We headed north out of Ettrick Bay and spent the first hour chasing a rainbow, pleasantly different.

We admired the scenery and the still-lingering rainbow as Buttock Point came and went. We were only a couple of minutes off the schedule – no problem. The Burnt Islands had their input as usual with the flow going against the grain. But once down to Colintraive we paddled steadily with a gentle flow, falling smoothly into the familiar routine of paddle-eat-drink-paddle. 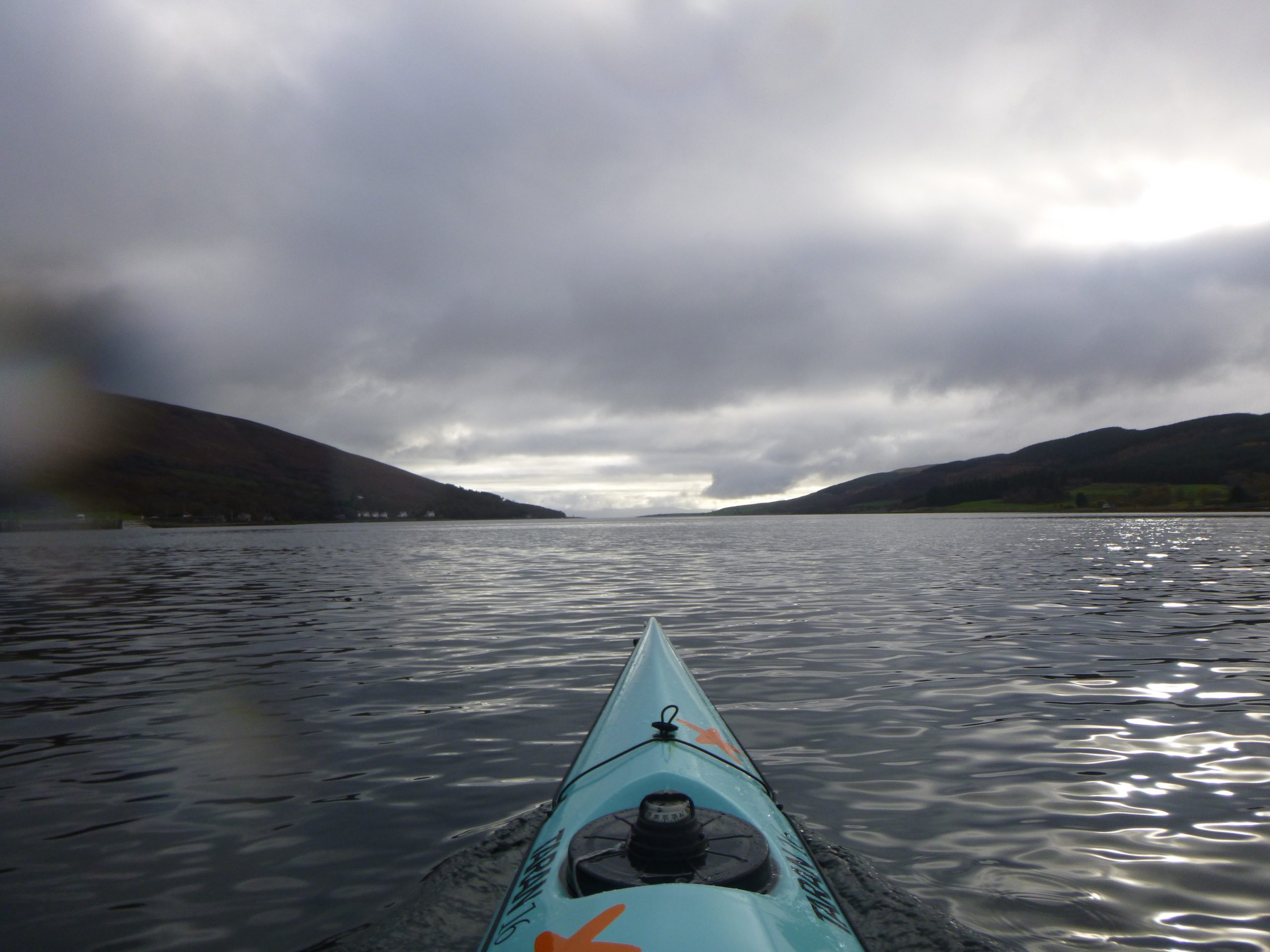 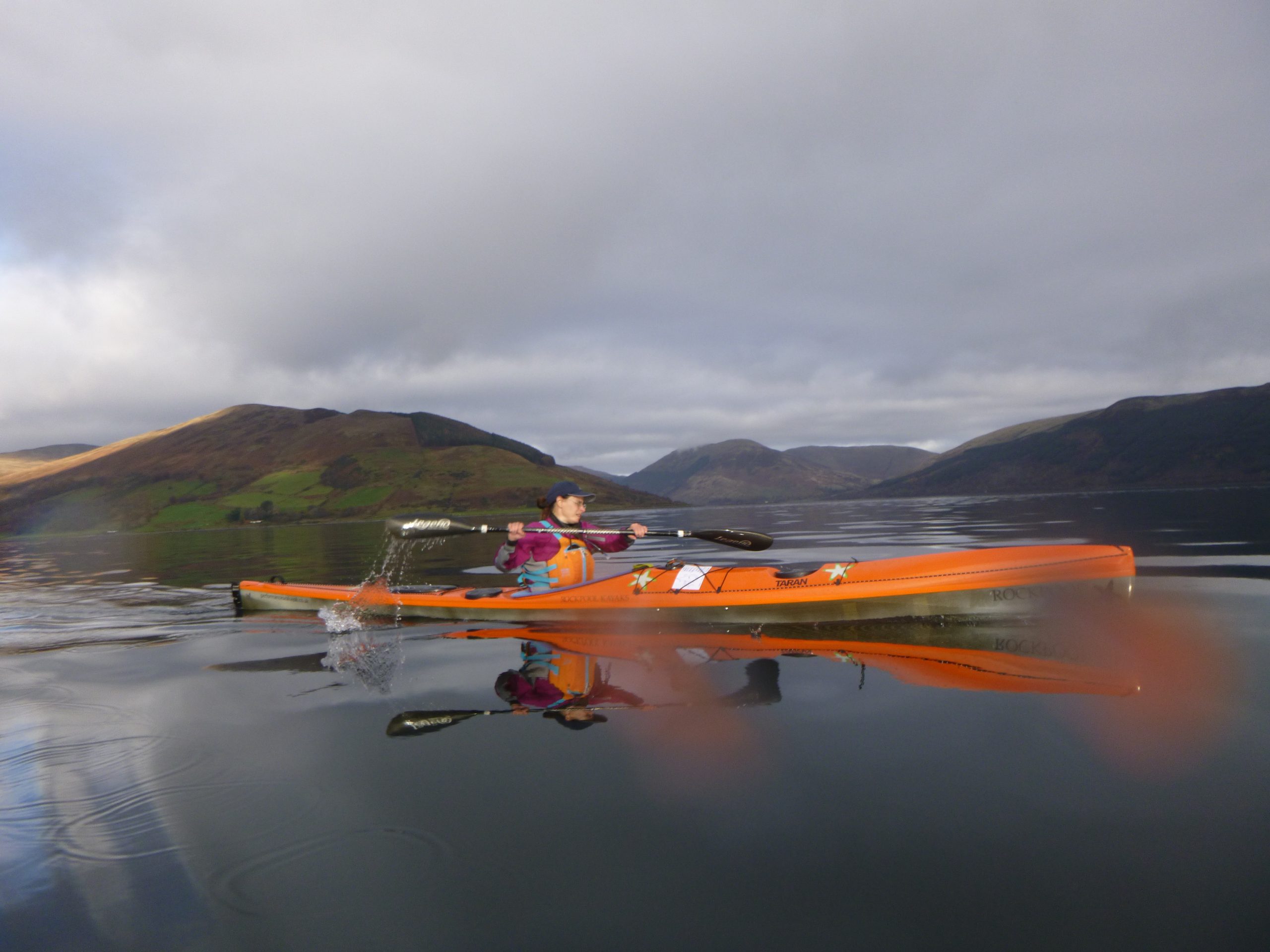 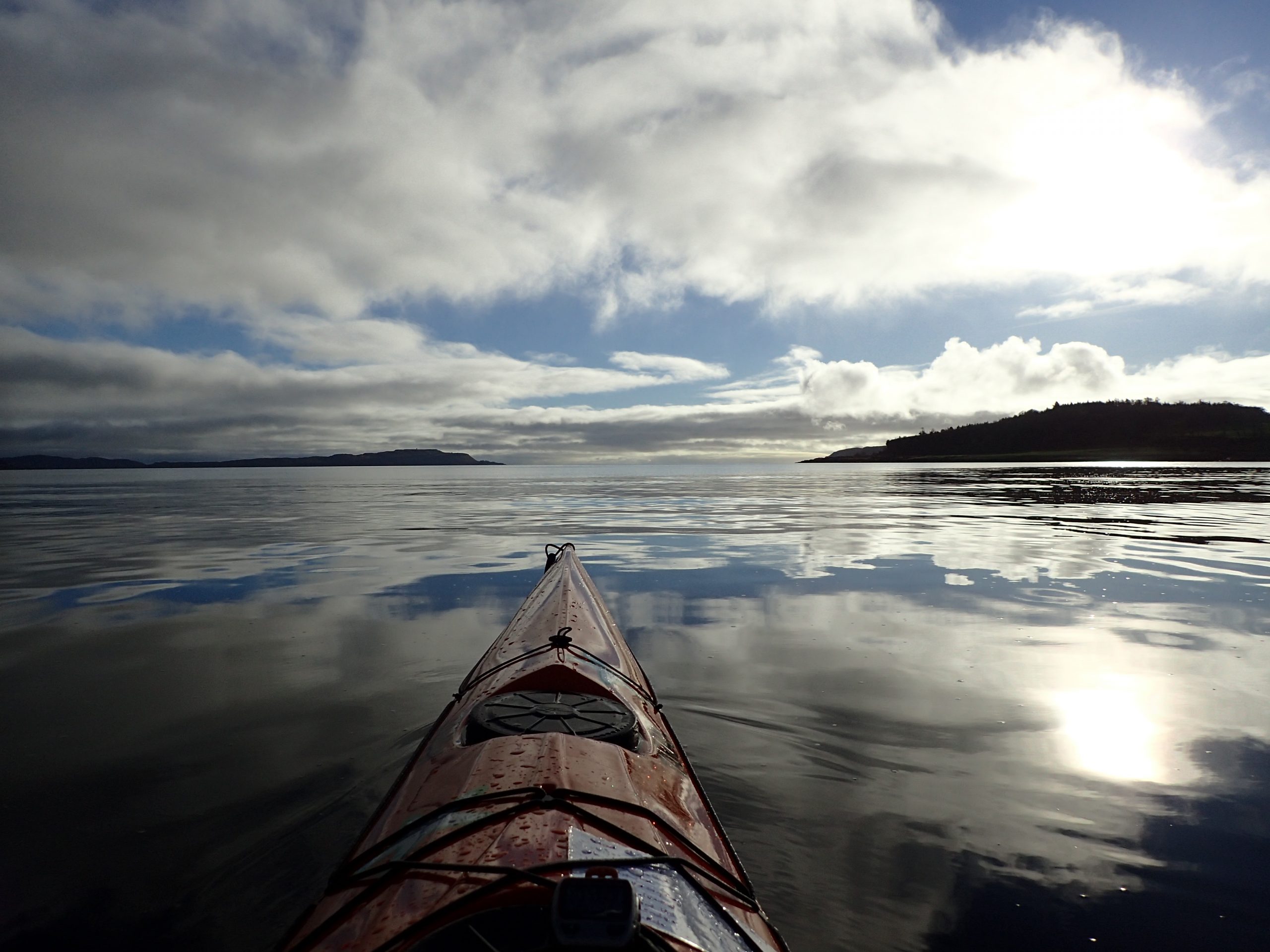 Off Port Bannatyne we had to turn sharply to avoid a collision with a high-speed myopic motor cruiser. A scary reminder that you are always the bottom of the food chain out on the water.

At Rothesay the ferry was making up for yesterday’s bad-weather holiday and we ventured in a little close towards Bogany Point to steer clear. A little too far in though, losing the flow as we slogged across a slack water stinking of second-hand haggis suppers. We were increasingly down on schedule now.

However further down channel things picked up. In the gap between Bute and Great Cumbrae, under a little sunshine, we started to gain time again as we cruised nicely down towards ‘the end’. A brief wave to the scenery viewers at the ‘light bach’ on Rubh’an Euan and then we hung a reggie towards Garroch Head.

At the bottom The Boss told me to set a pace for 6:59 and I was allowed to shout at her if I had too! Risky.

Another reggie-turn to round our final corner and we headed north once again, with the larger Isle of Arran looming over to our left. A gentle headwind was the order of the day now, under the gloomy clouds.

The required gap between Inchmarnock and Ardscalpsie Point was not obvious, but a rather melodramatic looking (and convenient) sunbeam broke through the clouds to illuminate the point, highlighting it amongst the uniform silhouette of the distant coastline. Knowing when to take a hint, we corrected slightly and headed that way. 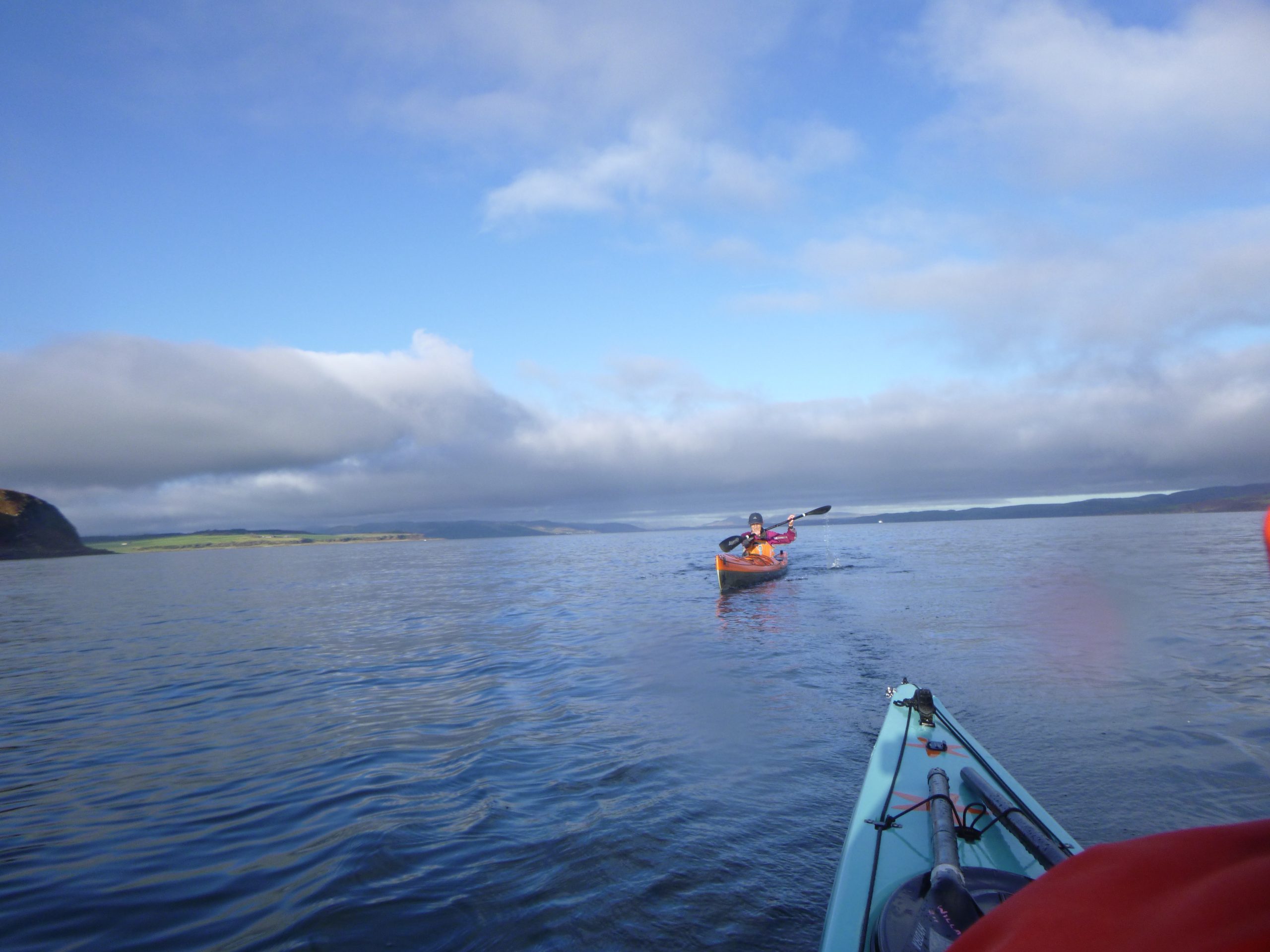 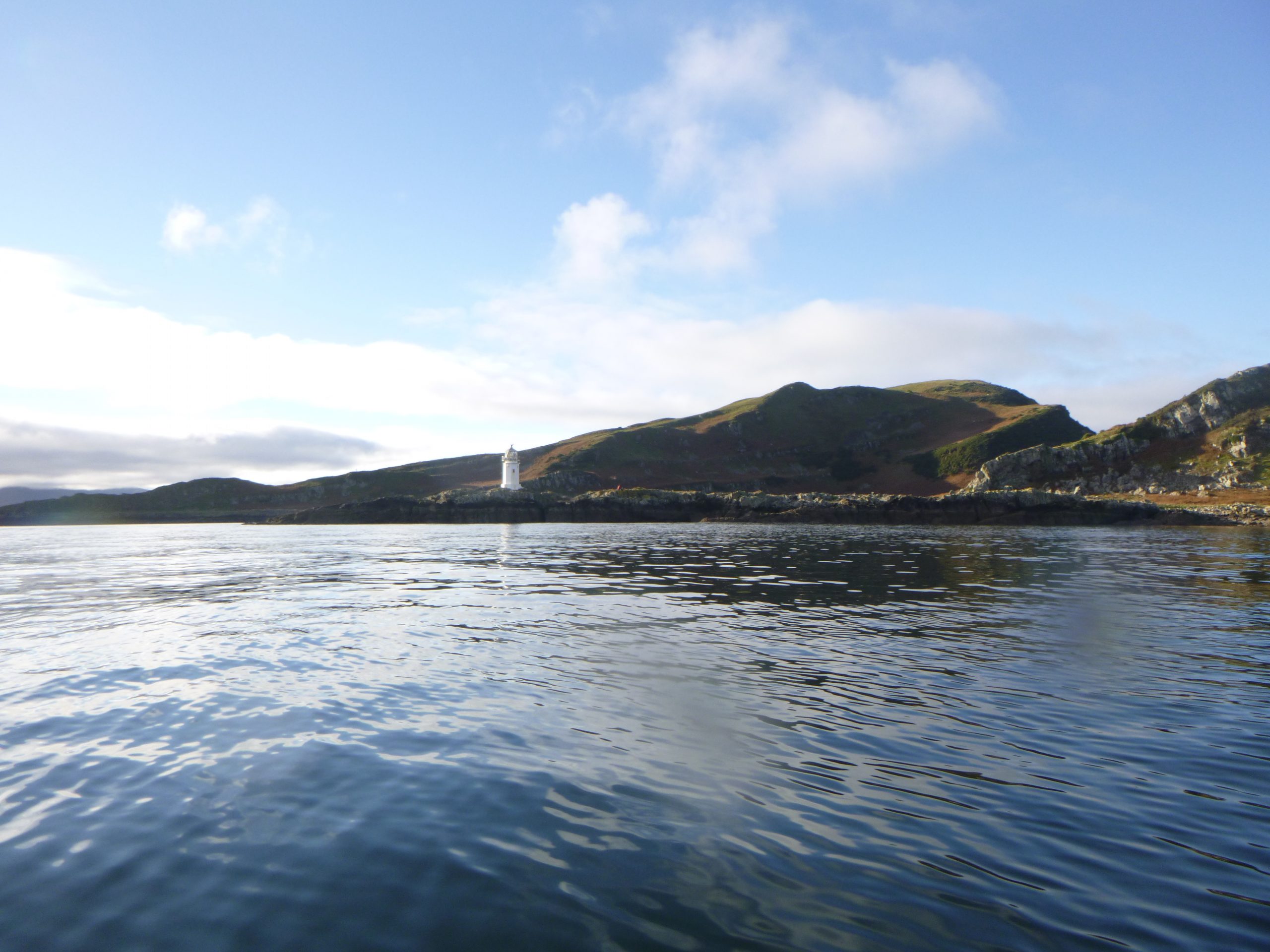 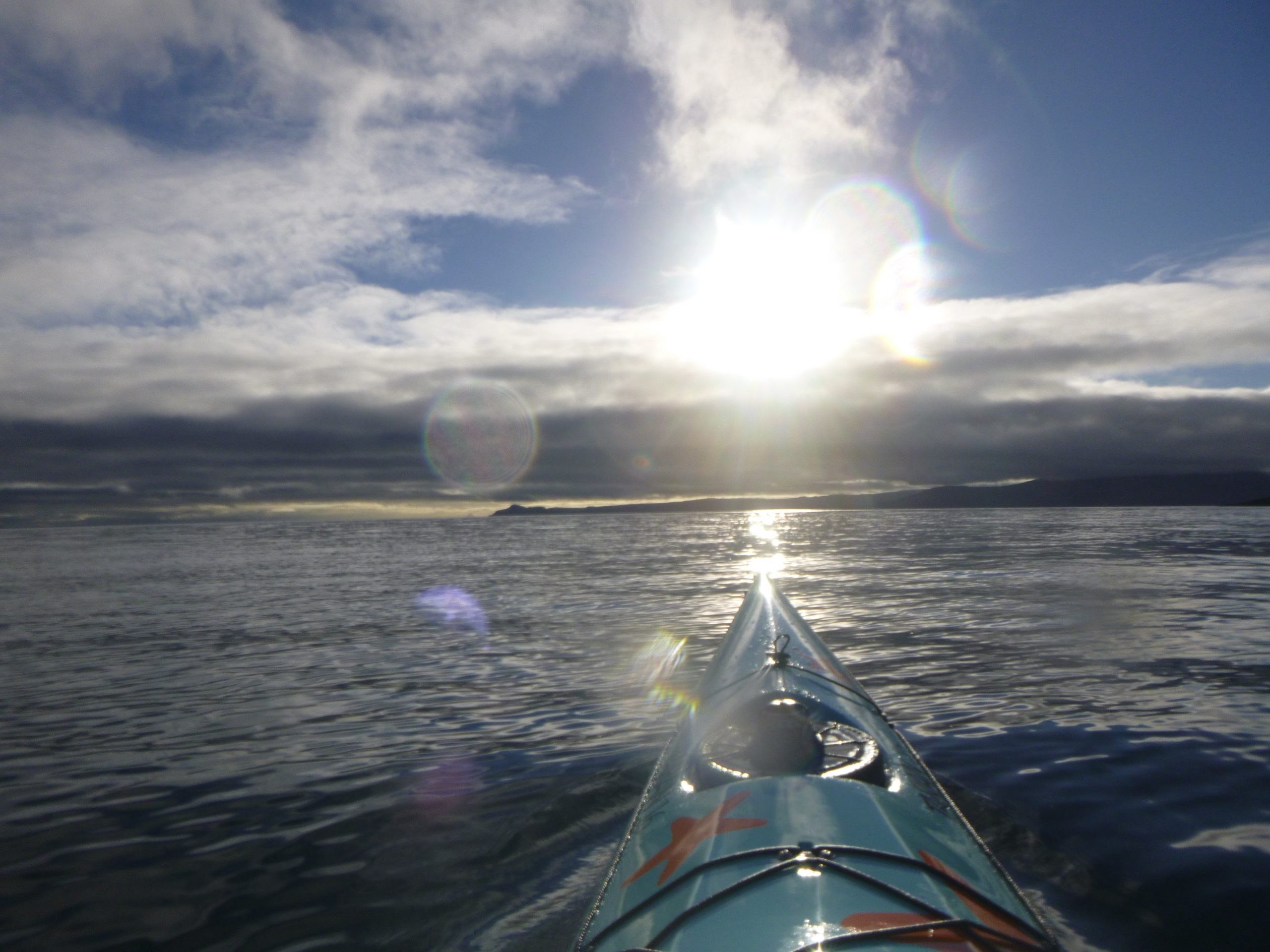 With the breeze long gone, we inched beyond Inchmarnock and were finally into our last hour. Working on the principle that you can always manage an hour, the pace was lifted a little more as we headed for the finish line. The Boss was still hanging in there, though I hadn’t got much more to give, any chat had stopped by now.

We closed on the finish and I fluffed finding the start/finish buoy completely, so an exaggerated GPS cross-over (just to be sure) meant that we didn’t know the exact time. But we were happily under 7 hrs.
The files were processed a few days later to show a pleasing 06:46:02 – a new Team Record and a good way to end the season. It shows all that training does make a difference. Hat’s off to The Boss for paddling it all perfectly,

I love it when a plan comes together. 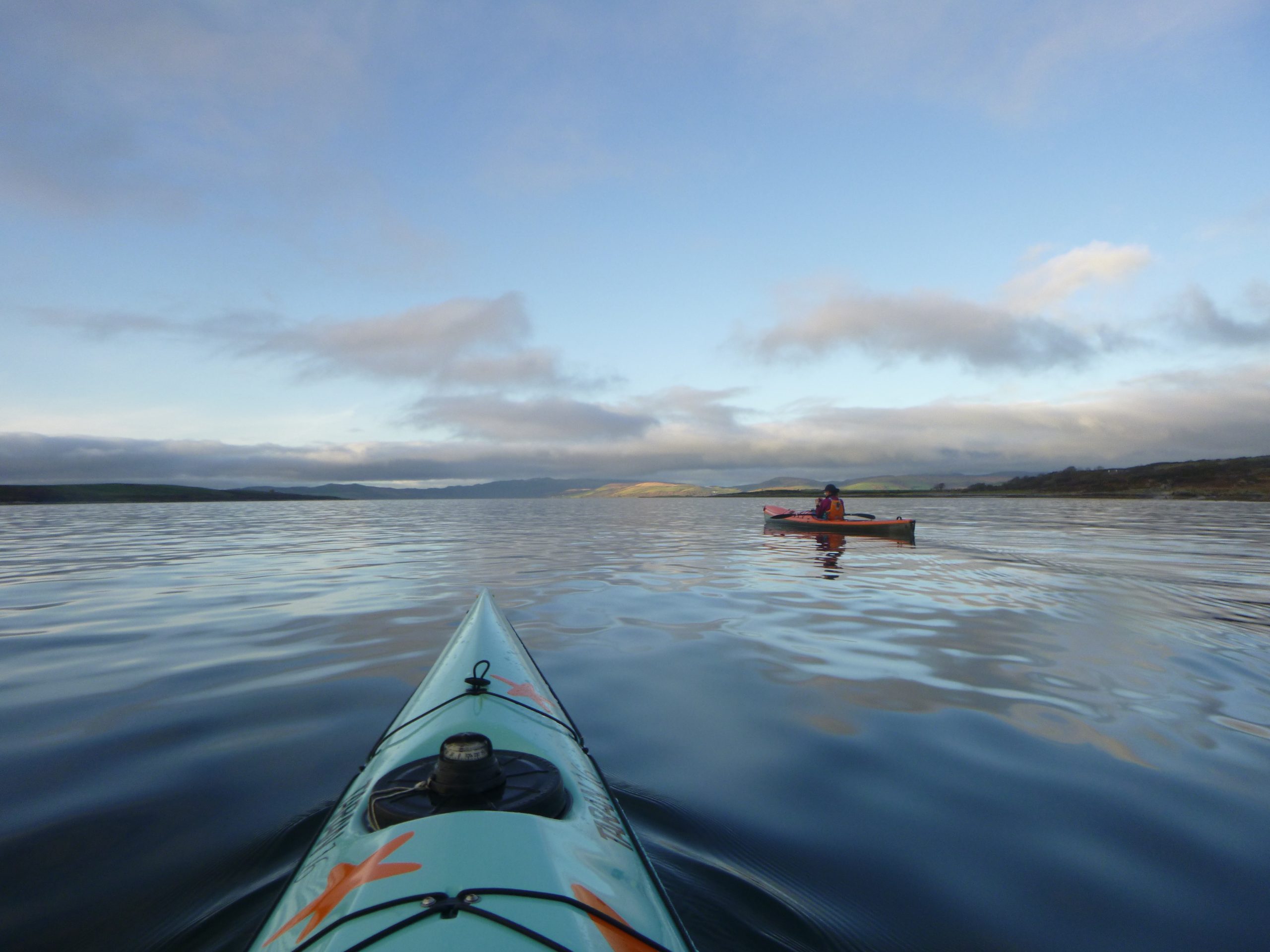 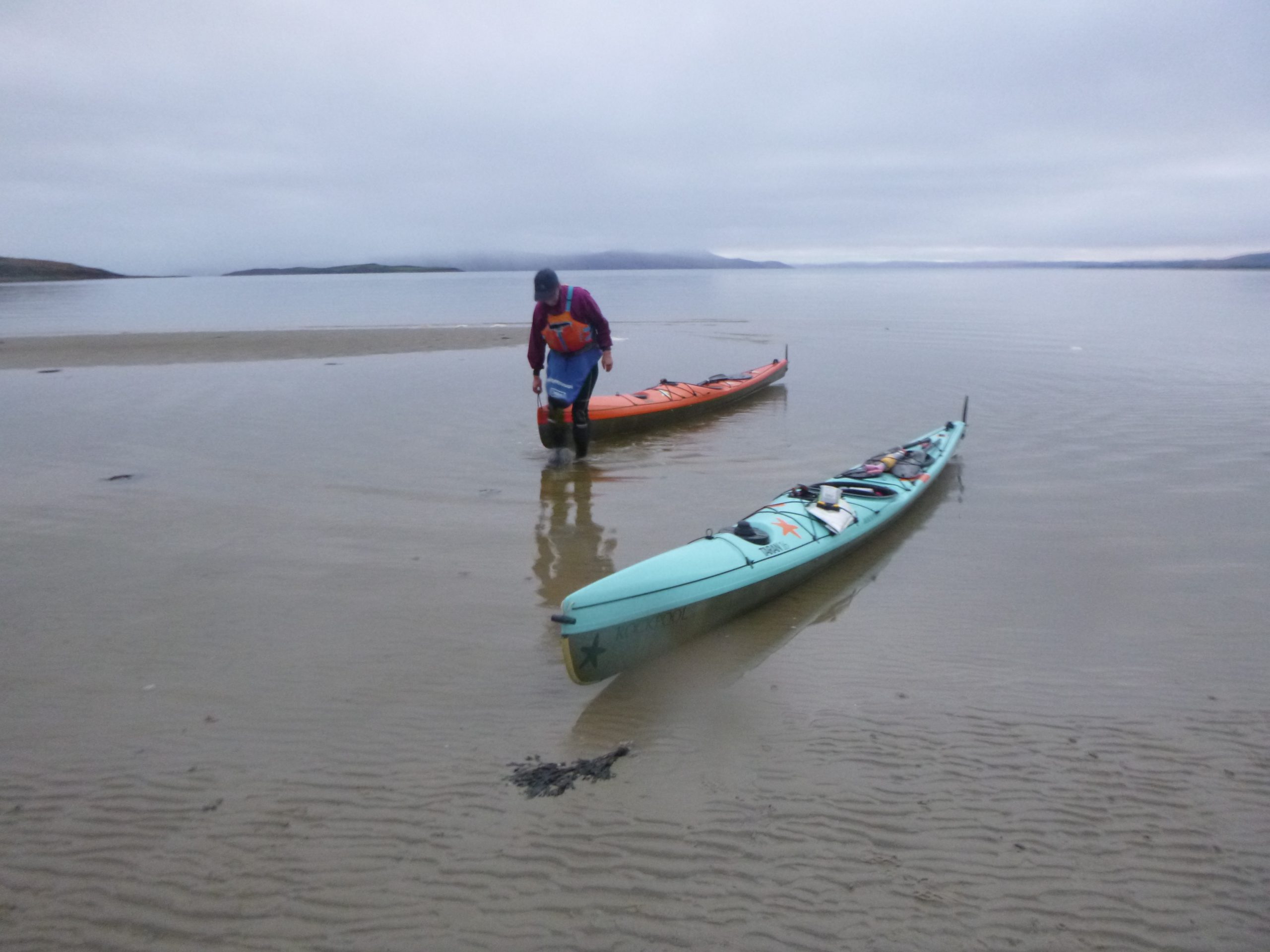 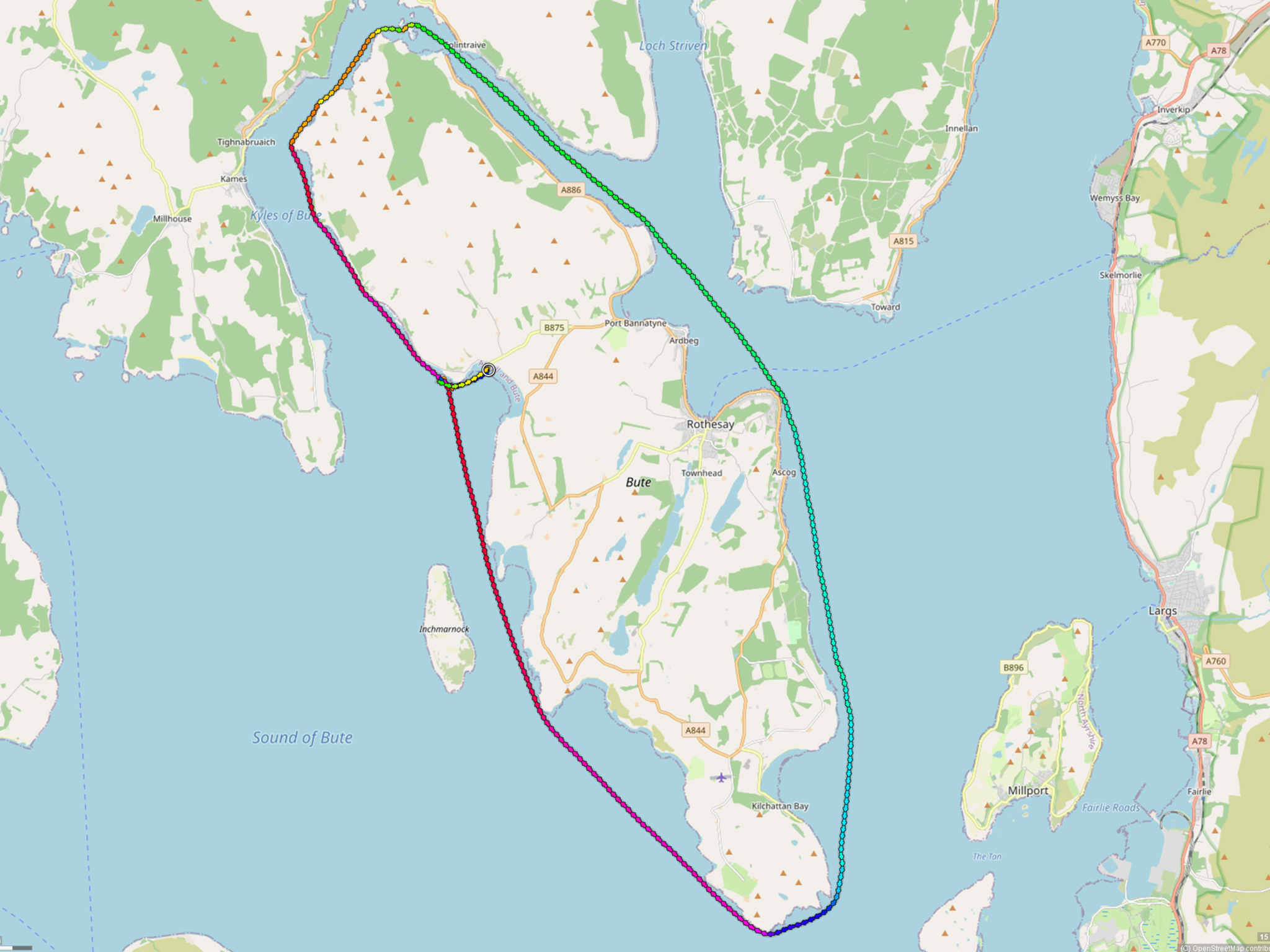