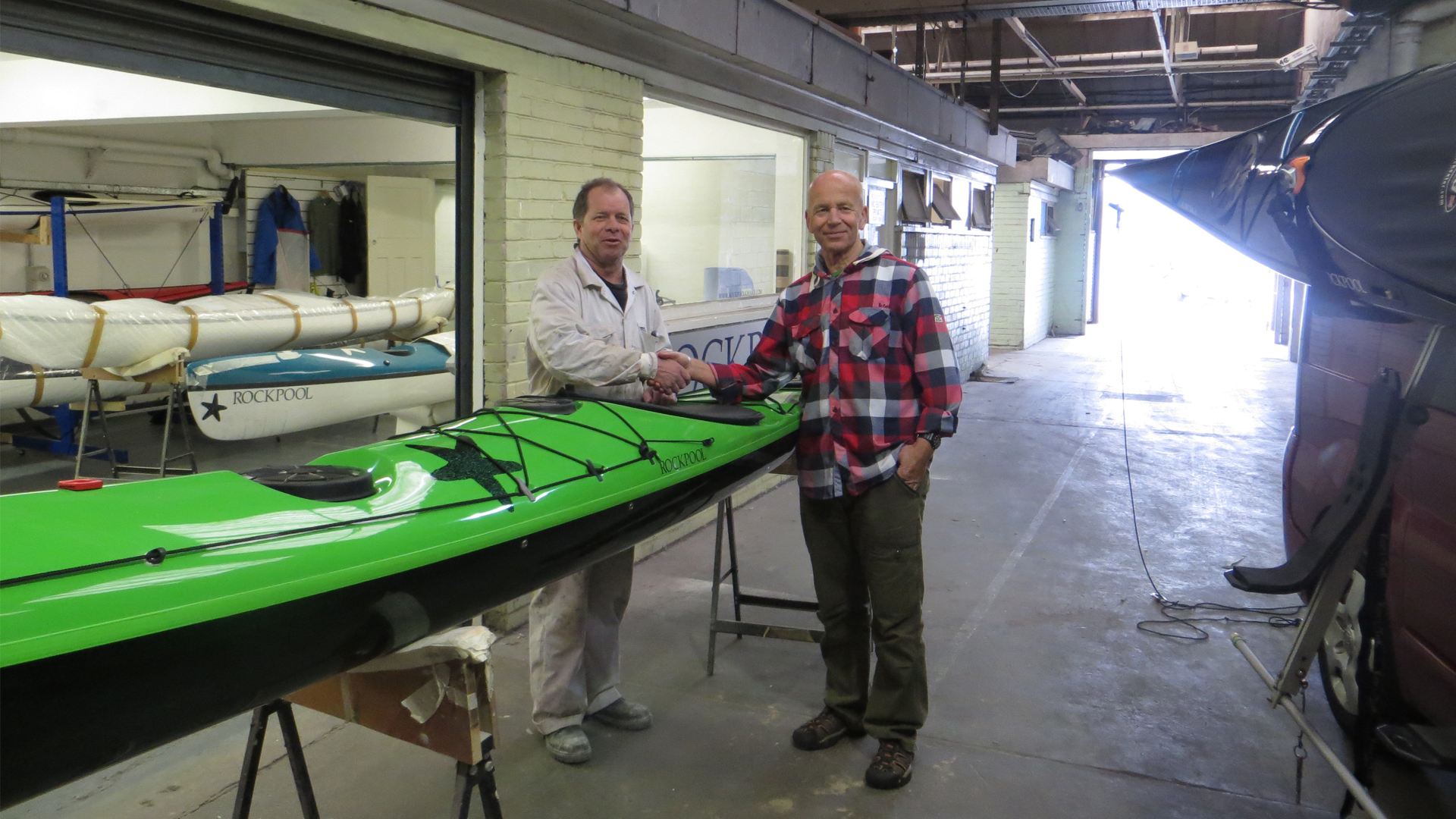 In 2009, following 38 years in the NHS, at the ripe old age of 63 I decided to retire.  At the time I was blissfully unaware of sea kayaking.  However, a chance meeting with a party of New Zealanders who were kayaking around Kefalonia stirred an interest.
What followed was a move into kayaking and, over the years, lots of self-practice, supported by skills courses in North Wales, Anglesey and Cornwall.

On one visit to Anglesey, staying with Paul & Catherine at Stick Cottage, I was introduced to Paul’s handmade Greenland paddles known as the Anglesey Stick.  This lead me to research Greenland Kayaking history and before long I was no longer using my carbon Werner paddle and fell ‘hook, line and sinker’ into the Greenland way.  I had found my own kayaking niche, or so I thought…

During one of our frequent visits to Anglesey, Sally my wife purchased an Alaw Bach from Mike Webb at Rockpool.  While at the factory with her I had noticed Tarans being built, but did not think about them any deeper than that.  However, bit by bit I was reading and hearing of ‘daring do’ trips achieved in these boats, which reminded me of my original kayaking inspiration of the Kiwis circumnavigating Kefalonia.

A demo paddle of both the Taran 18 and 16 followed and I found them both to be faster than my SKUK Romany, more demanding (I had one or two oops moments), but had a performance edge that generated a big smile.

I paddle on the Norfolk Broads as well as the sea, so with this in mind I ordered a Taran 16 model – I felt it was more suited to the narrower inland waterways than the 18.  I collected it from Rockpool in May 2014 on my 67th birthday.

In use, the oops moments very quickly disappeared and the boats performance and feel was encouraging me to extend my skills.  My rolling improved, as did my general Greenland skills.  It was fun doing speedy curves with elbow submerged and shoulder just skimming the water.  And yet… nag, nag, nag.  The Taran seemed to be saying this Greenland stuff is all very showy but what we should be doing is putting the County of Norfolk on the Performance Sea Kayak (PSK) map, by doing some proper paddling in the form of a time-trial.  Reluctantly giving in to this nagging feeling I found myself buying a set of wing paddles and training with the racers at my local paddle club in Norwich (Broadland Paddlesport).

Norfolk has miles of sandy beaches, but from a kayaking point of view when paddling offshore it can all look rather bland.  However, move up to North Norfolk and things change; creeks, estuaries, inlets and harbours become a frequent feature.  One location in particular was of interest to me, Scolt Head Island, a barrier island between Brancaster and Wells next the Sea.

I have paddled this area many times before with friends and Sally, and was aware that you had to pay particular notice to the water depths in the creeks and channels. Scolt Head is approximately 11 miles to circumnavigate. It is open to the North Sea on one side and with creeks and a tidal channel on the other, separating it from Brancaster on the mainland.  It lends itself to be Norfolk’s perfect PSK time- trial course.  I would give it a go!

On the day of the circumnavigation I gave myself plenty of faff time but still had a number of things to do with only 5 minutes to launch.  I had paddled the area before but this time I felt really ‘keyed up’, my nerves were jangling – it was the time-trial affect hitting me hard.
At the appointed time I sped off through the breaking surf like an arrow and then noticed I had neglected to turn on my GPS unit, essential for registering the journey with PSK.

Paddling back to the start point I waited impatiently and after what seemed like an age for the unit to find a satellite signal I was at last able to restart.  The first 900 meters provided a slightly troublesome beam sea and wind but once I turned due east on the open sea I felt the advantage of both for 5 miles as they pushed me towards the entrance of Burnham Overy Harbour.

I turned due west for the homeward leg, the water is shallow in this area and depending on the swell and wind direction it can give you a rough ride but on this occasion lovely rolling waves sped me through (it was at this time I noticed I was being escorted by a very large seal).
Once in the bay steering for the main channel and heading west a strong, energy sapping headwind slowed progress. The channel feeds into Brancaster Bay/Harbour, this wide open area, exposed to the wind, caused large waves to develop, breaking over the bow of the Taran.

On landing I remembered the GPS this time and pressed stop, allowing it to record the route before jumping out of the boat and doing a little dance of delight.

A guy walking on the beach came up to me and said “I saw you through my binoculars – where did your dog go?  He was swimming behind you”.  I had to explain it was a seal!

Prior to this time-trial I hadn’t thought of myself as someone who would enjoy doing something like this.  Although I can become somewhat obsessed with gaining or improving my kayaking skills, such as rolling, I am not competitive and entered this rather reluctantly as it didn’t feel it was a natural thing for me to do.
But I loved it!

The key to the feeling of heightened awareness was the addition of the ticking clock, I could feel its presence and I am sure I heard it ticking on a few occasions, a bit like Captain Hook’s crocodile in Peter Pan!  It totally focused me on the movement of the boat, and the areas that were affecting my performance, such as changing wind conditions, navigation and my own actions and decisions.
The training and pre-planning of the tides etc. had come together.   It surprised me how competitive I had become and how enjoyable the experience was.  In one respect, the actual time recorded was irrelevant. It was the combination of the various factors that made up the time-trial that made it special for me.  It was about getting the best out of myself and the boat and felt really personal….  I was hooked.
The joy of kayaking for me remains with the Greenland skills but now I’ve added a new, equally as enjoyable, PSK aspect to my paddling.  I don’t view them as separate, it’s just what I do.

I am now planning to do a solo Wash crossing. This time-trial malarkey is addictive.