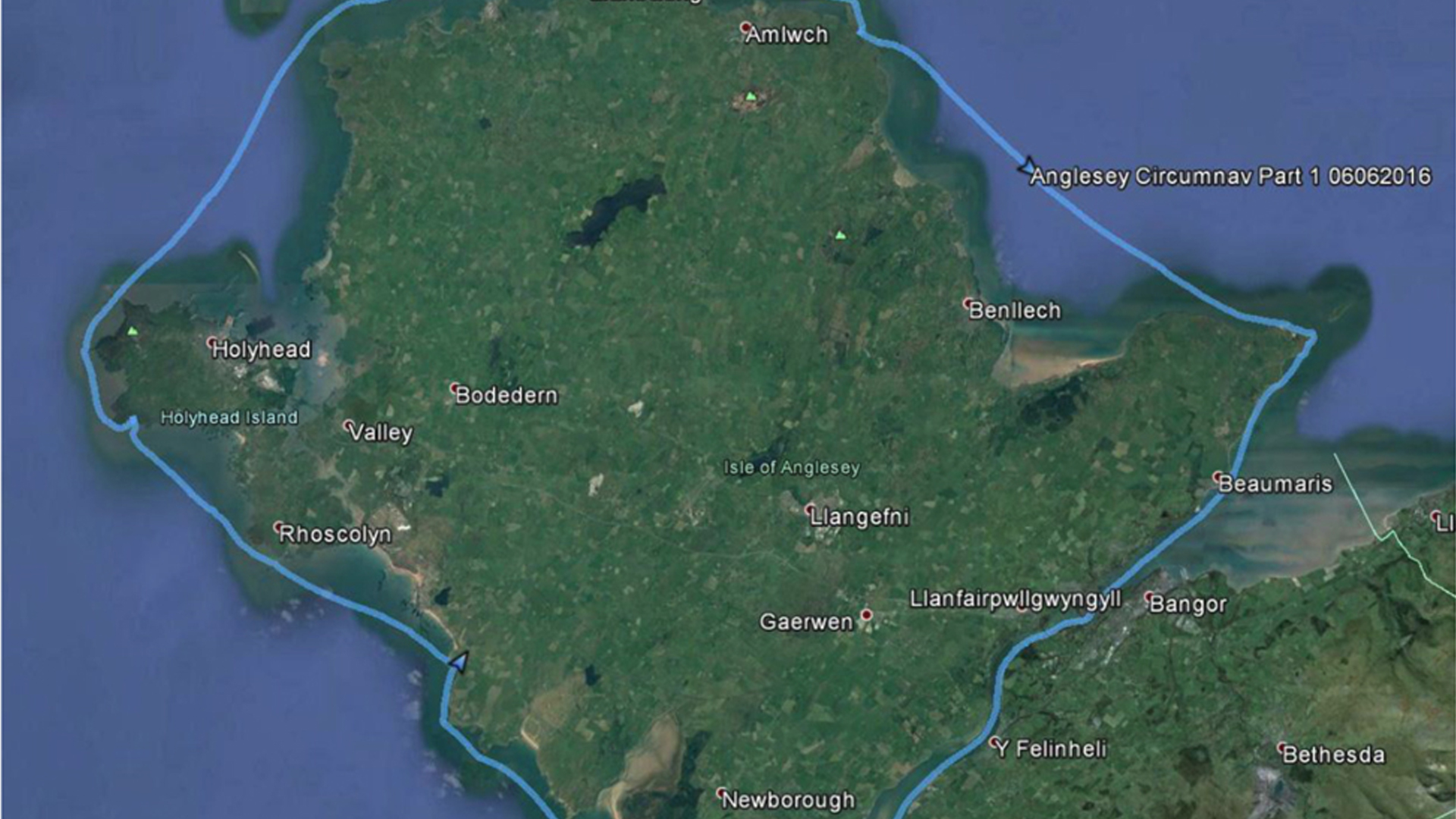 Very soon after I began kayaking I remember chatting to Eila Wilkinson about her record attempts at circumnavigating Anglesey in a day. As a beginner to kayaking, the idea of paddling almost 125km seemed incredible, but as my experience widened, and knowledge of tidal planning increased, it no longer seemed impossible, the idea took hold, and it became one of those items on the ‘bucket list’.

In deepest midwinter I drew up a calendar using the next years tide table, and was surprised to see how few ‘ideal’ days there were available for certain paddles, once both the size of tides, their timing – and the length of daylight were all taken into account. What was needed for an ’Anglesey round’ was a decent-sized tide to assist, with High Water at the right time of day, plus a good length of daylight. On top of this it would also be nice to have only light (or no) wind. A bit of research showed that most people chose to travel in a clockwise direction as the tidal push was strongest on the flood, and they usually began somewhere on the west coast.

As usual though, when the day came, it was all a bit ‘last minute’. However, the weather looked promising – it was obvious that the long spell of calm weather at the end of May meant that there would be no swell or winds to complicate matters.

Having decided ‘to go for it’, the evening before I noted down where I should be at a particular time on the way round – if I set off from Cable Bay (Port Trecastell) early enough I would be able to pass Penrhynmawr & the Stacks as the flood was building, cross Holyhead Bay without bumping into any ferries, and get maximum push past Carmel head and ‘the Mice’. The critical gate would be to reach Penmon Point before the tide began to rush out of the Menai Straits which would stop you in your tracks.

I meant to get an early night, but it was midnight, and the alarm was set for 2:30am… There again, I didn’t sleep anyway. Driving to Cable Bay I passed through patches of dense fog and I wondered whether this might be a problem. But when I got to the bay, just as dawn was breaking, there was no sign of any sea mists. I probably woke up a few unhappy campervanners who had taken over the car park, but at 4am I switched on the GPS and pushed off from the beach.

Straight away, it was clear that the lack of any wind over the last week had worked its magic – the surface of the sea was so flat that it was difficult to get any idea of distance or scale, it was like a desert mirage, in greys, where nothing would quite come into focus. Also, it was quiet…, with just a few seabirds out and about and the gentlest of waves lapping against the rocks. My first objective was Rhoscolyn Beacon which I could just make out through the murk, so I pointed my Alaw bach in that direction. Shortly after, the sun rose to my right and I immediately began to warm up. An hour later I passed between the mainland and the Beacon and began searching for any sign of flow in the right direction. Next marker was Port Rufydd where I’d planned a quick pit-stop to grab breakfast and decide on clothing for the rest of the trip. I underestimated the flow heading into Penrhynmawr, so had to fight a little to enter the little bay. I quickly put a lighter top on – it was already warming up and the forecast predicted a sultry 23OC. Back on the water, I’d never seen Penrhynmawr looking so flat – but definitely moving! I passed South stack on the outside and North Stack quite a way off from where we’d been playing a few days before. Turning the corner I still couldn’t make out the Skerries, but I did notice that there was large ship on my port side that was keeping up, and showing every indication that our positions might coincide… A quick radio check, and, accompanied by a small boat, the cruise liner passed a few hundred metres in front of me and I was able to continue.

Holyhead Bay was flat flat flat. As soon as I could make out the Skerries, I headed straight for the gap between them and Carmel head. As I approached, the waves breaking over ‘the Platters’ sounded like a train and the GPS briefly showed my speed at 18kmph – couldn’t complain about that! I passed West mouse on the outside and for the first time I had to paddle through a few waves! In my plan I had considered landing at Porth Cynfor for a break, but I was too far out when I passed Middle Mouse – should have taken the inside route, as I ended up wasting some time fighting the eddy behind the island. At this point I was definitely beginning to feel the effects of paddling for almost 5 hours, and despite forcing myself to drink & eat every hour or so, I was starting to get bad cramps in my legs and arms… I now definitely needed to stop and stretch out, but the next sensible spot would be Point Lynas. Oh well, just have to keep going – past Bull Bay and Amlwch, trying to stay off shore until the last moment when I could dash into the small bay just past the old harbour. It took longer to make shore than I wanted, and for the first time my schedule was beginning to slip a little – but I had no choice, I simply couldn’t carry on any further without dealing with my cramped muscles. I landed and did some stretches and ate lunch, then it was time to continue – still a long way left – in fact, to my horror, not even near half way yet – my aching muscles didn’t like the sound of that.

Back on the water, I passed Ynys Dulas well out to seaward and tried to find any remnants of the flood passing Red Wharf Bay. A quick pause opposite Llandonna to text Jenny my location, and I could just about make out the shape of Penmon lighthouse. Another hour later, and the lighthouse did not seem to be getting any bigger – and I could now tell that I wouldn’t quite make my gateway time. Demoralising, but no alternative to dig deep and keep going and hopefully I would still be able to make some headway along the Straits.

Eventually I crawled past the lighthouse and was able to pull in briefly, but knew I couldn’t rest – I had to pass the slack near Beaumaris in the next hour. Best efficient paddling style needed now, and was pleased that I had swapped to my wing paddles at Point Lynas. Some kayakers coming in the opposite direction gave me a wave, but sorry, no time to chat.. When I reached Beaumaris the moored boats were all pointing towards me, phew, and the flow was definitely back in my favour as I passed Bangor pier. Another long rest was required at Menai slipway – more cramps to deal with, but I knew now that as long as I could keep going, nothing should stop me… or could it? A terrific ‘CRASH’ and I could see sparking thunderclouds drifting down from the Carneddau and towards Caernarfon.

When I reached Menai Bridge I realised that I could ease off a little – it wasn’t going to be a fast time now, and I just wanted to make sure I made it. After a good rest I headed back into the flow, through a few big boils in the Swellies and on through familiar territory. The rest of the Straits slipped by without incident but there was very little flow past Fort Belan when I got to the exit. I turned this last corner and aimed for Llanddwyn lighthouse and noticed some unpleasant boomers breaking over the shallows between me and the headland. With a bit of zig zagging I negotiated the shallow sand banks and wondered for a second whether it would still count as a circumnavigation if I had to get out and walk?

I reached the headland and could almost see the finish point when the sky became dark and I turned around just in time to see and hear more lightning and thunder. This was not going to pass me by and very soon the rain began –big pointy lumps of rain but I didn’t mind. Just another 45 minutes paddling to go.

As I turned the prow to the right and back into Cable Bay I took my time to savour the moment. So that is what it is like to paddle around Anglesey… After 14 ½ hours the crunch of the shore beneath the boat felt sweet (landfall a few feet to the left of where I began – just to make sure!).