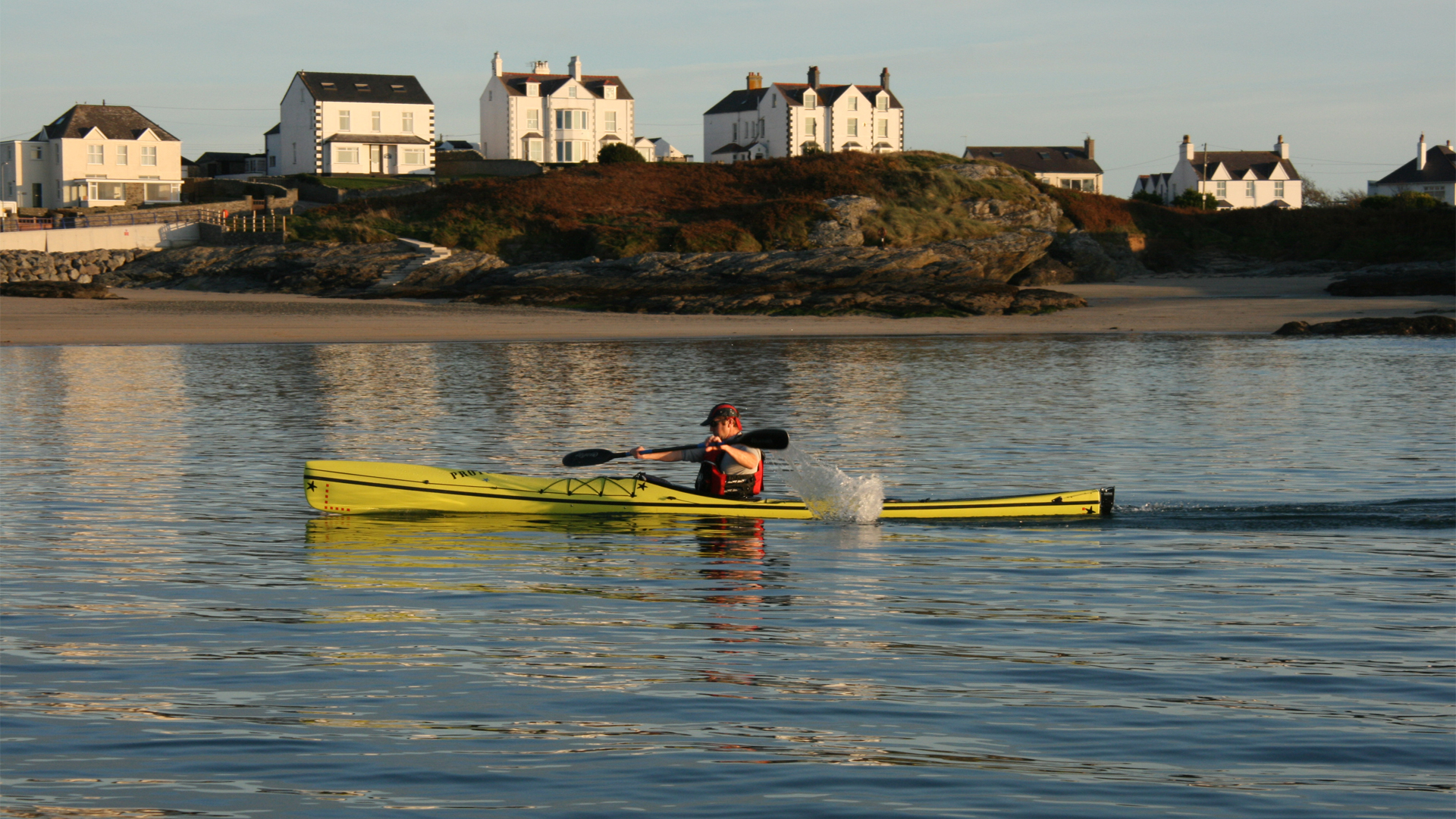 The Rockpool Taran first took to the water in August 2009. To mark the end of that first decade I thought I would take a little look at a photo history from  those 10 years.

To start let’s mention that the Taran was originally known as the Tarran. Only later, when the boat reached pre-production stage, was that second ‘R’ dropped, and the boat became known as the Rockpool Taran. Hence why you may see different spellings here and there.

First are some rather scruffy photos from July 2009, showing the original Tarran plug being put together. 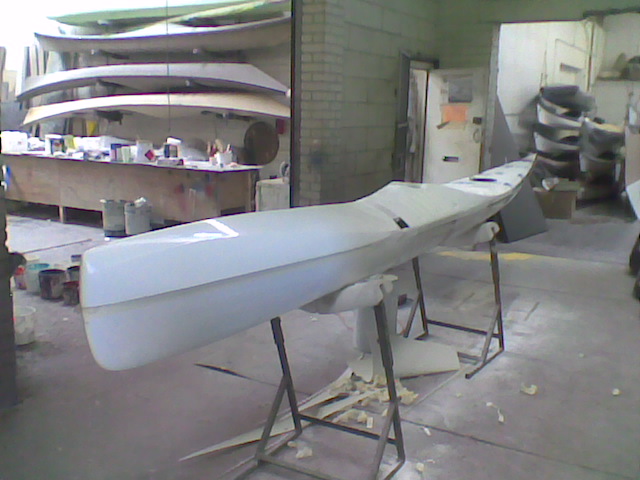 The rather distinctive deck lines of the Taran came about from my experience paddling in Wild Water Racing (WWR) competition. Before the Taran project took form at Rockpool I had designed a couple of WWR kayaks there.  Much of what we learnt from developing these kayaks would be useful later in the design of the Taran. They incorporated distinctive features – the high-volume chiselled front deck and the flat-section hull – that would become synonymous with the Taran design. 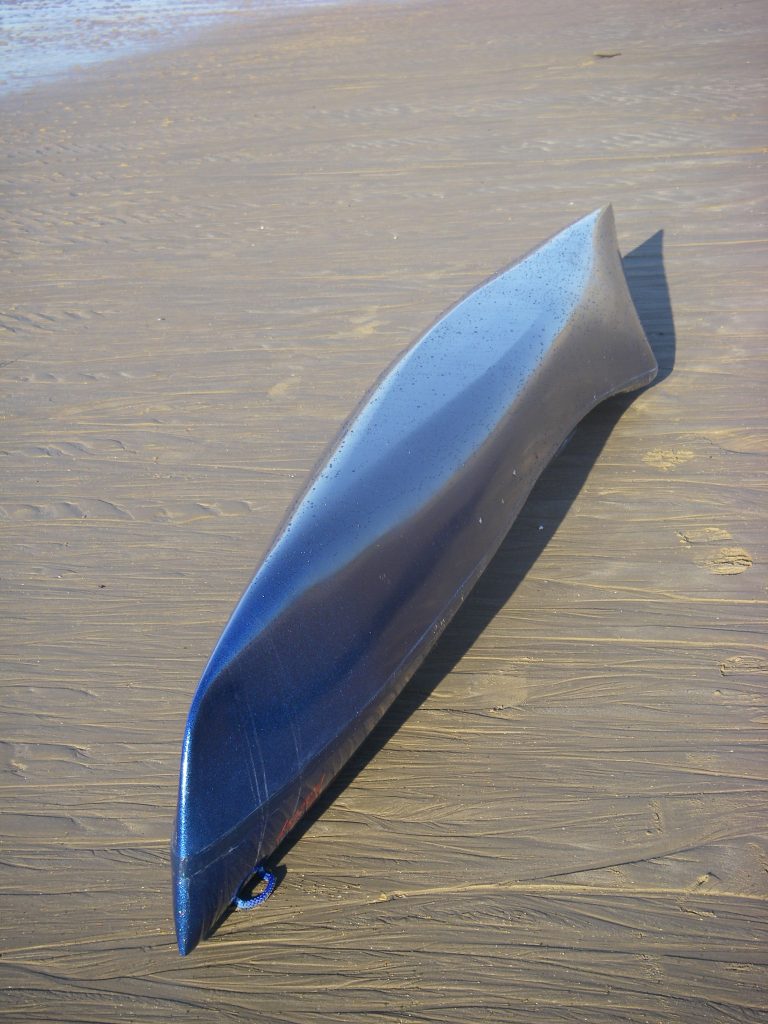 On the same day, the Tarran took to the water, from the Menai Bridge slipway, for a first paddle around the Swellies. It was a relief to see that the trim of the new boat was pretty even!

The Tarran prototype was a step in the unknown to a real extent. It’s worth pointing out that in 2009 this kayak was as much a proof-of-concept craft for Rockpool as anything else – it was such a step away from convention.

This kayak was a little rough and ready if you looked  not-even closely. However it was a great floating prototype for testing and development.

Before testing could truly start there was a little selfish matter of an attempt on the Anglesey Circumnavigation record. In the very earliest days, when the future Taran was only a conversation topic at Rockpool, the plan was to design a boat to improve on the Anglesey record.  As the prototype took shape in 2009 I was looking forward to this, however the schedule was too tight and there was only enough time for one late season attempt. In the end the boat was launched just 3 days before the last record window of 2009 – not  much time for  familiarisation with a new kayak design. (The reason the front hatch was missing from the Tarran was because of this tight schedule).

Even so,  on 22nd Aug 2009 I paddled the Tarran around Anglesey and knocked 20 minutes off the record. The boat was smooth and handled well through the chop. The results were very encouraging at such an early stage. There were Monday morning smiles back at Rockpool – successful so far. 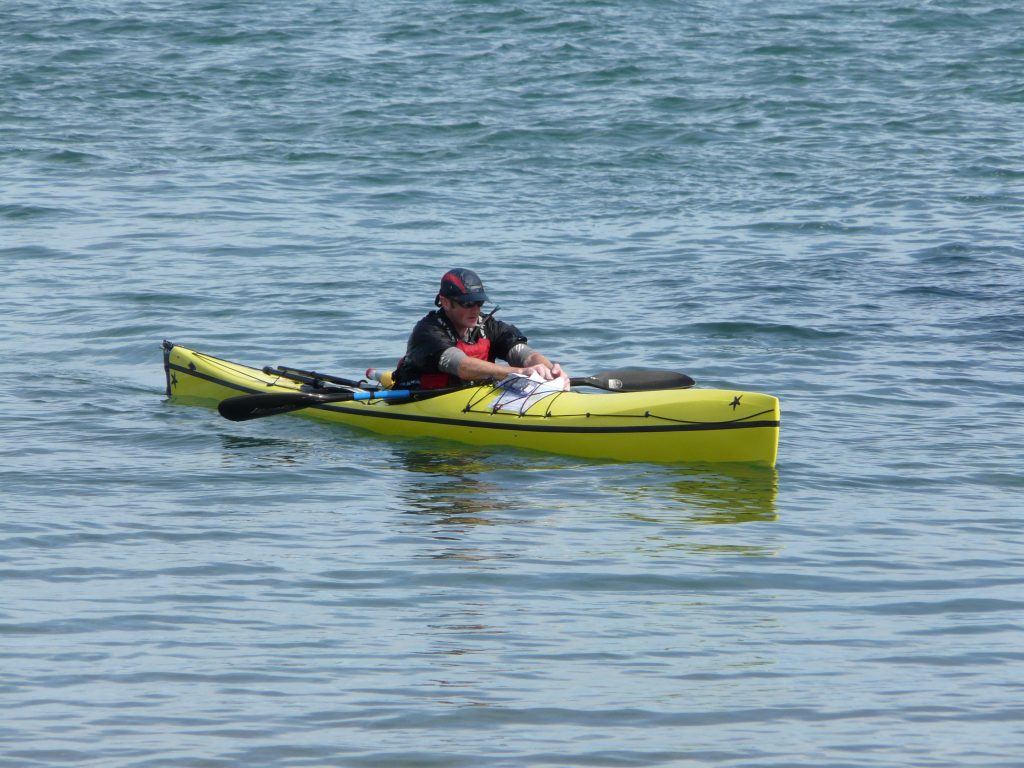 And so during the autumn of 2009 and through the following winter I quietly got stuck into testing. The results were discussed in many idea-bouncing sessions with Mike back at Rockpool. This was a new design and nothing could be taken for granted.  Findings from this prototype were going to be fed into the production kayak, so many areas of handling had to be looked at: trim, stability, open water handling etc. Even the most basic things had to be tested – taking photos and taking a pee for example… 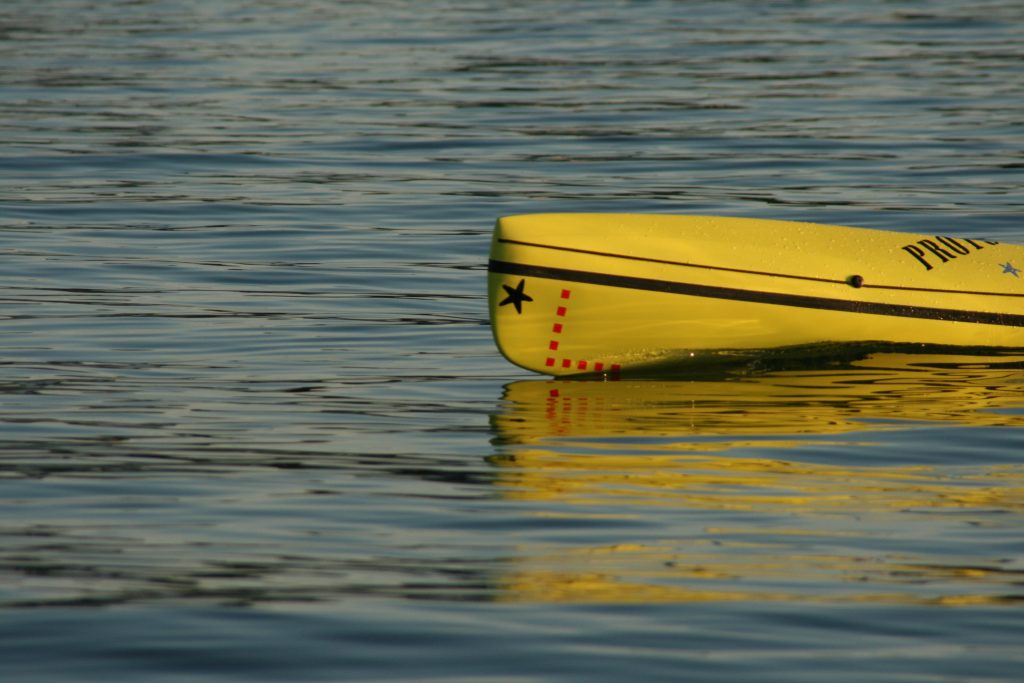 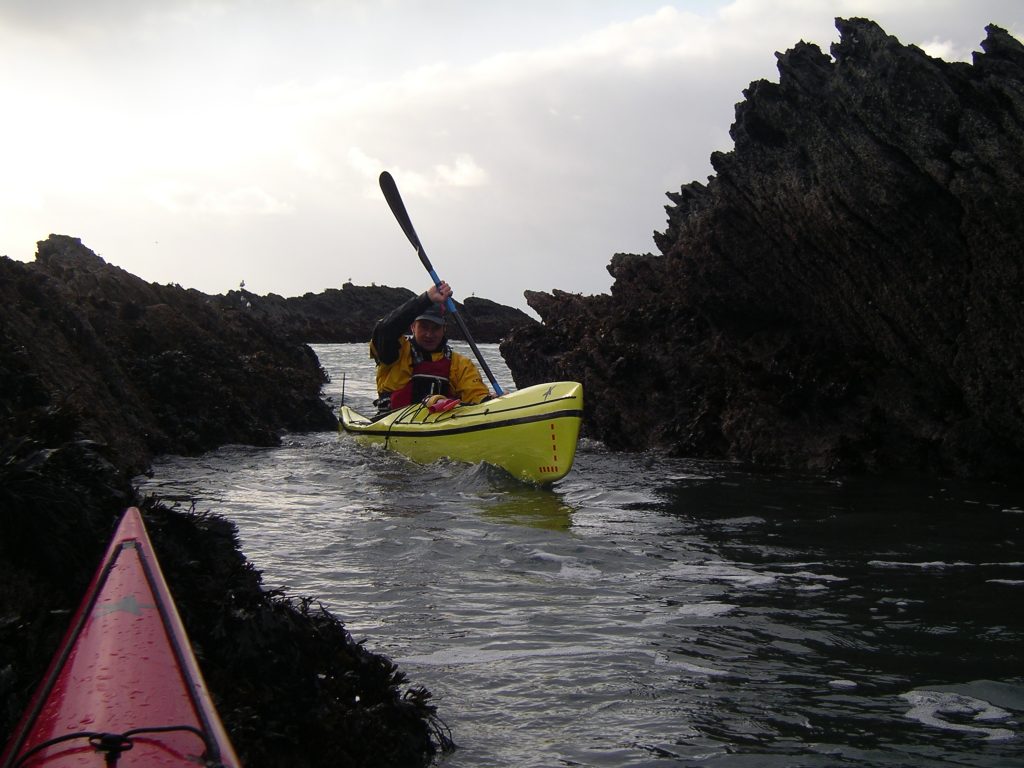 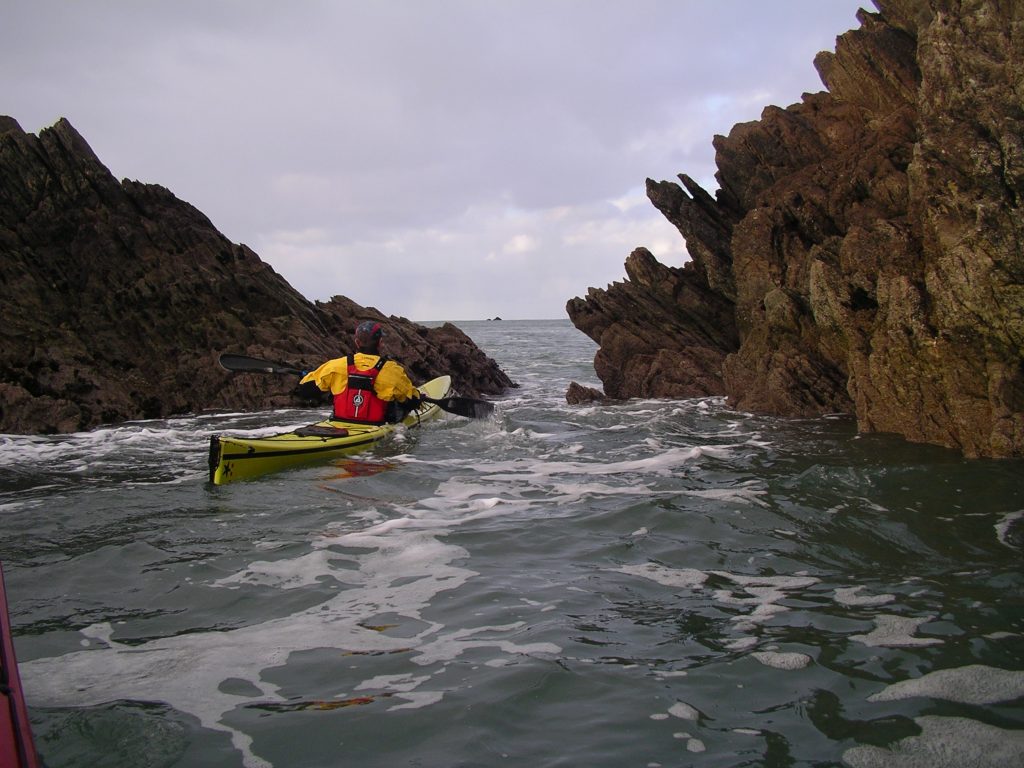 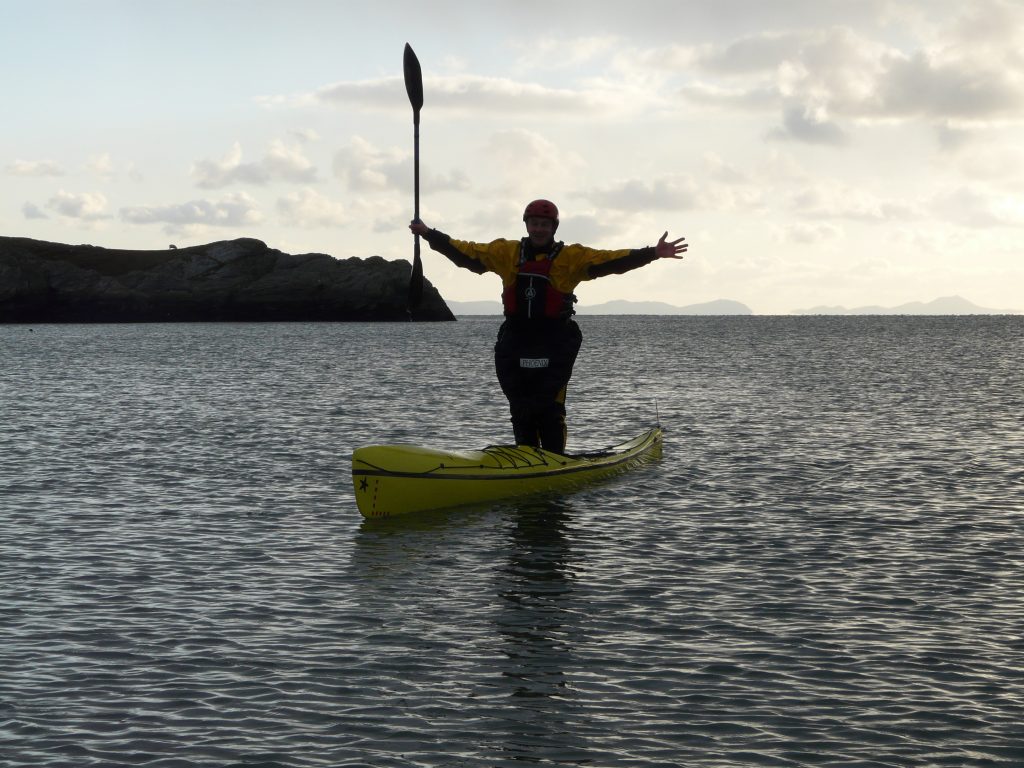 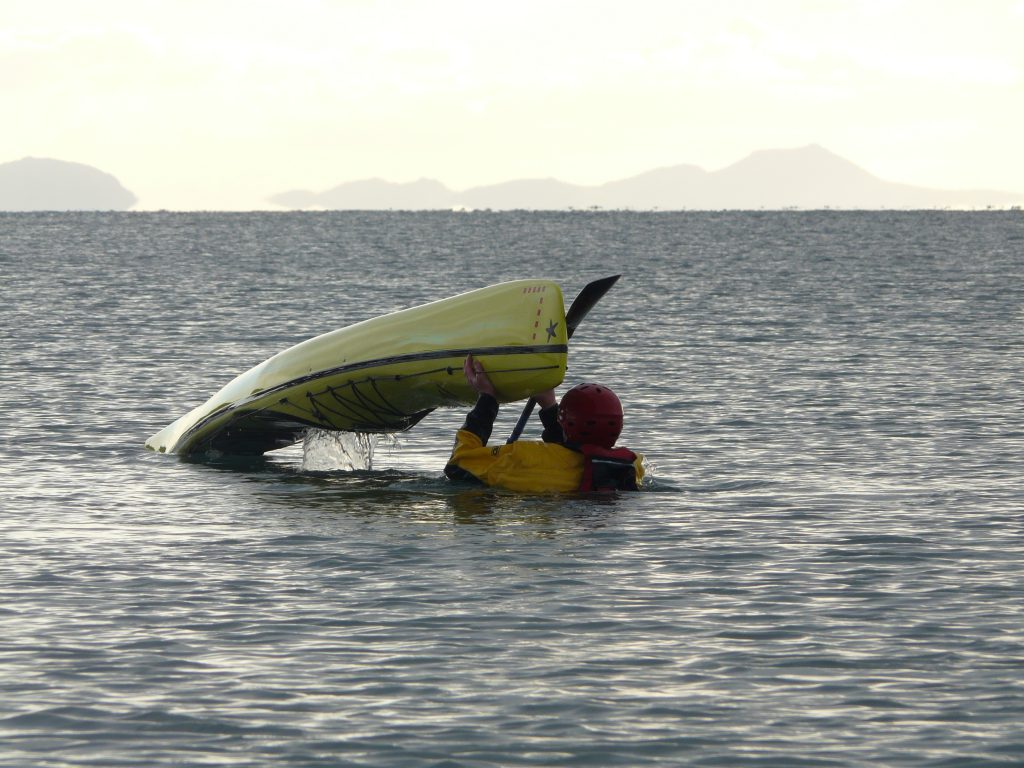 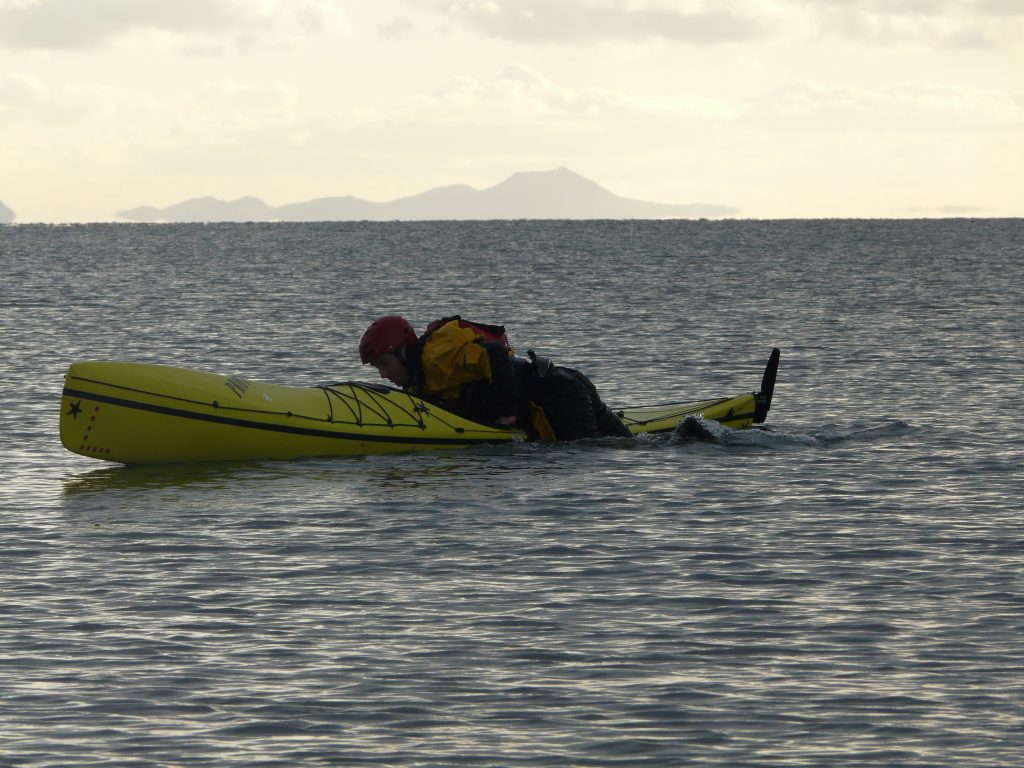 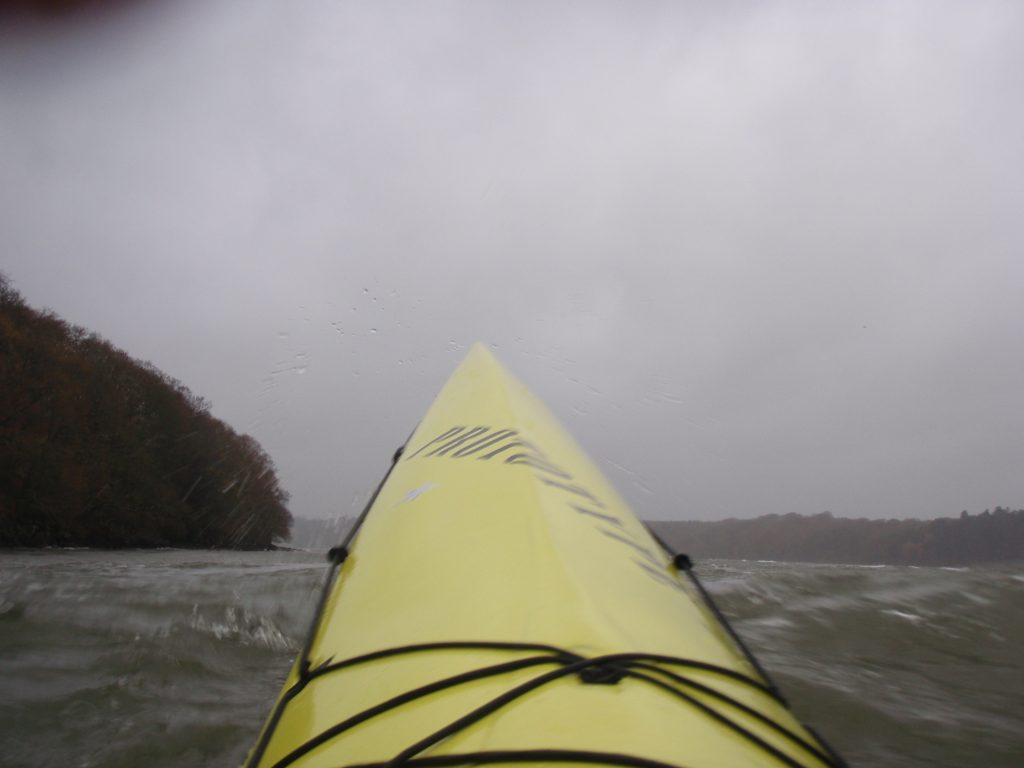 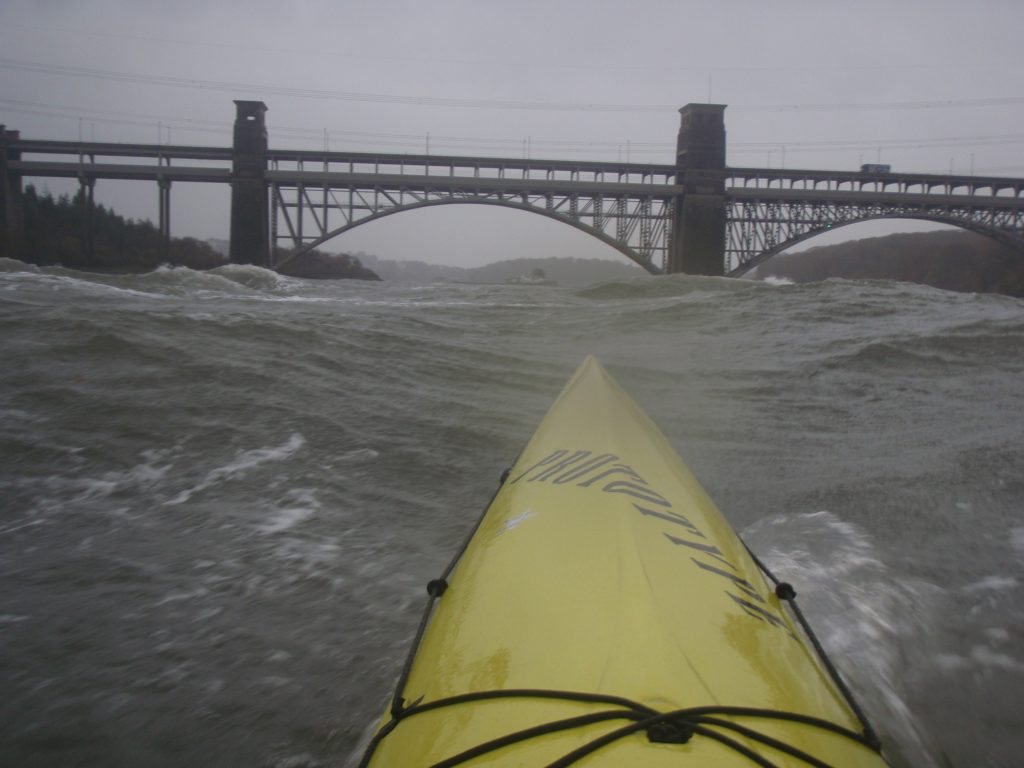 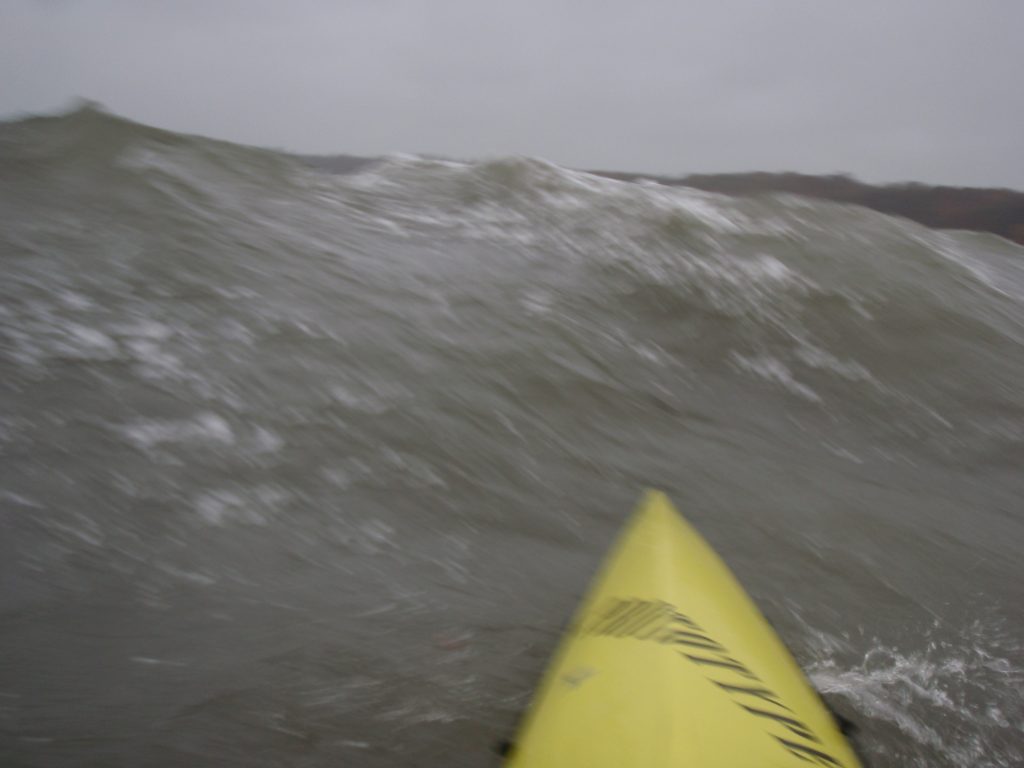 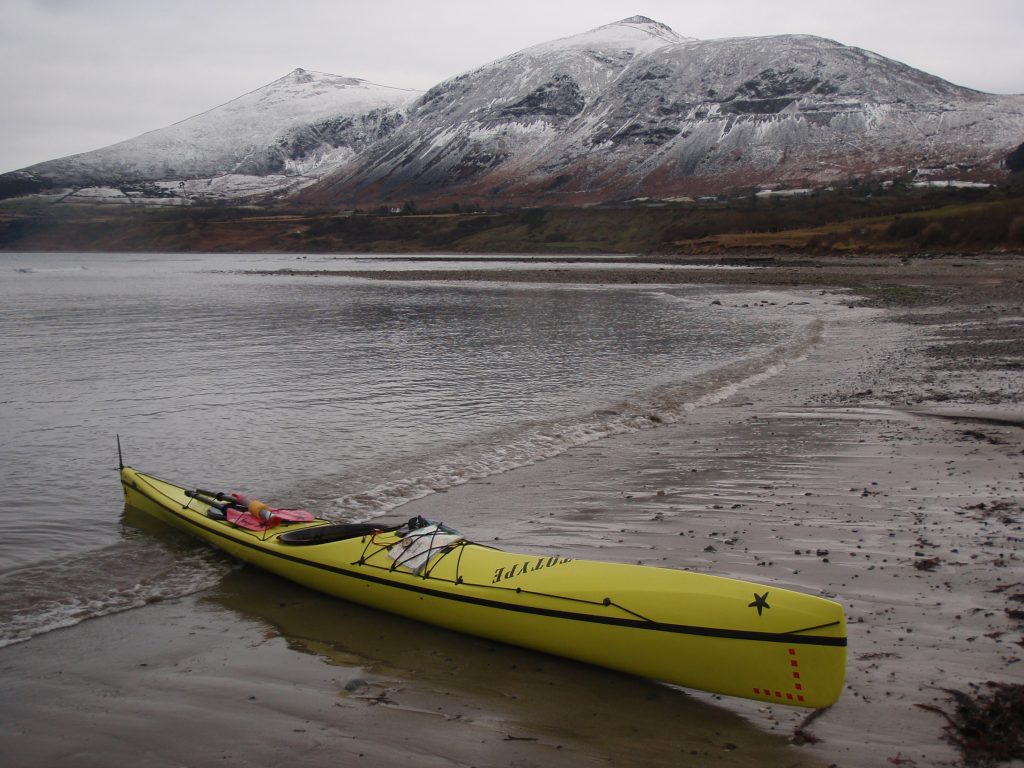 For the most part I paddled the majority of the early testing.  There were pro and cons to this approach. One of the pros was standardisation. I knew how I paddled, my fitness and ability. So this allowed me to make direct comparisons  between testing sessions, without having to allow for variability in paddling styles or experience that would come from using other paddlers.  It also meant we weren’t too distracted by opinions.

However this standardised approach also came with a downside. We did need input from other paddlers. We needed different thoughts, different approaches and styles, along with differing body sizes and strengths to learn as much as we could. Friends and acquaintances were roped in.

It has to be said that I was also enjoying myself. It could take a little persuading to get me to hand the boat over at times. 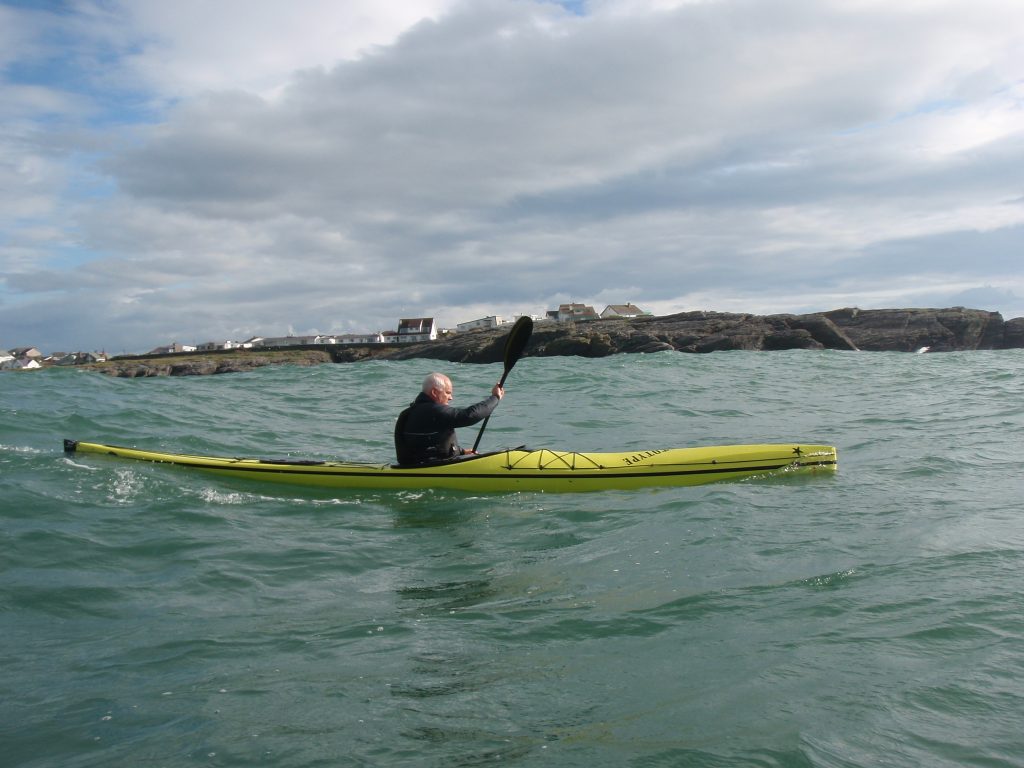 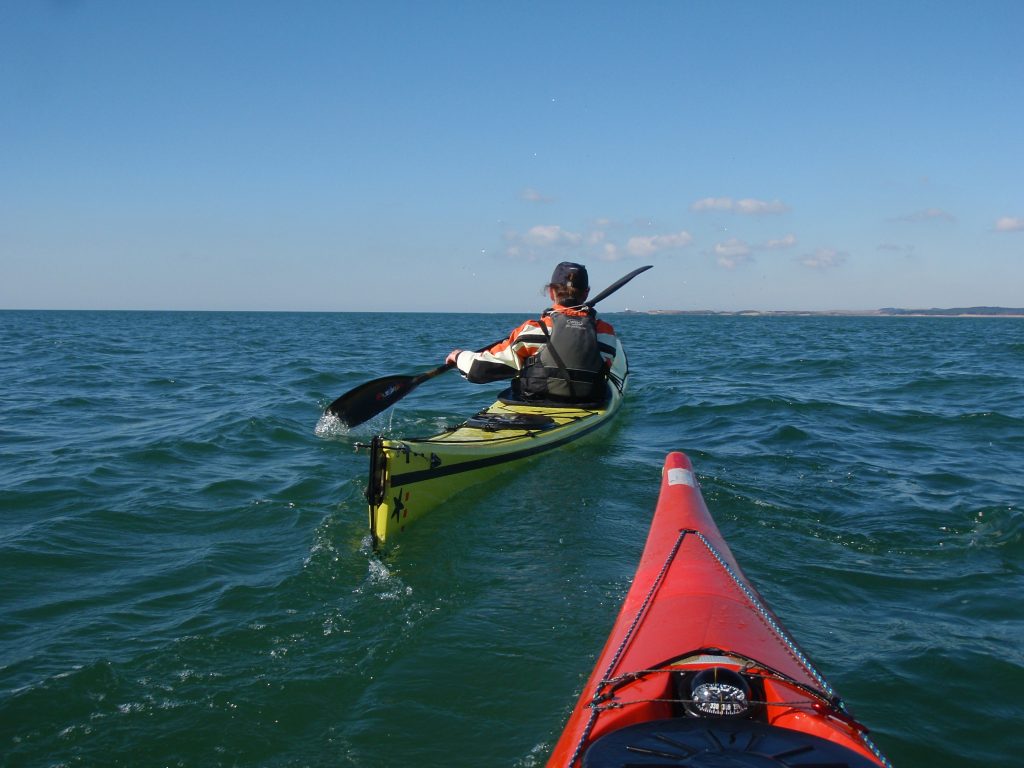 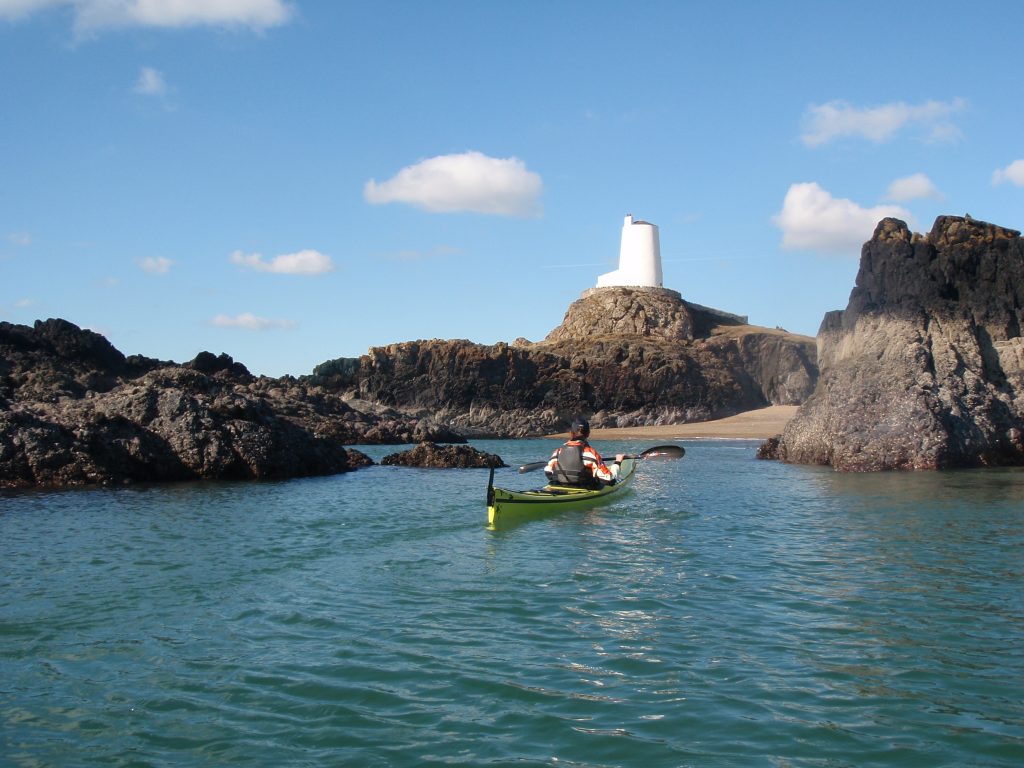 All of this info was being taken on board and behind the scenes the development of Prototype 2 – ‘Tango‘ was moving along.

Tango took to the water in the last week of March 2010. A front hatch had been added, the rising rear stern had been flattened and the hull and deck had both been blended and smoothed. The lumps and bumps had gone! The ‘Tarran‘ as a kayak was now renamed the ‘Taran‘ too.

In a reprise to the launch of the first prototype, Tango was taken straight out for a hard paddle as well – a run of the  3hr Puffin Island TT. It was a good test – speed and comfort were checked at a high intensity over a long duration.

Three weeks later I paddled Tango to the first major crossing for a Taran – Anglesey to the Isle of Man – 41 nm of open water. Whatever you thought about the Taran, there was no arguing that it was a sea kayak now.

While testing continued with Tango, the kayak was close to production standard now.

Various adjustments continued: development of the seat, deck fittings optimised, locations for toggles and handles were tried and rudder fitting was tweaked. But on the whole things were good, no major hull or deck changes would follow. And so the Taran soon moved into production.

By summertime 2010 the Taran was now in production, and people were taking it for a paddle.

Next –  the role of the Rockpool Taran expands and develops.