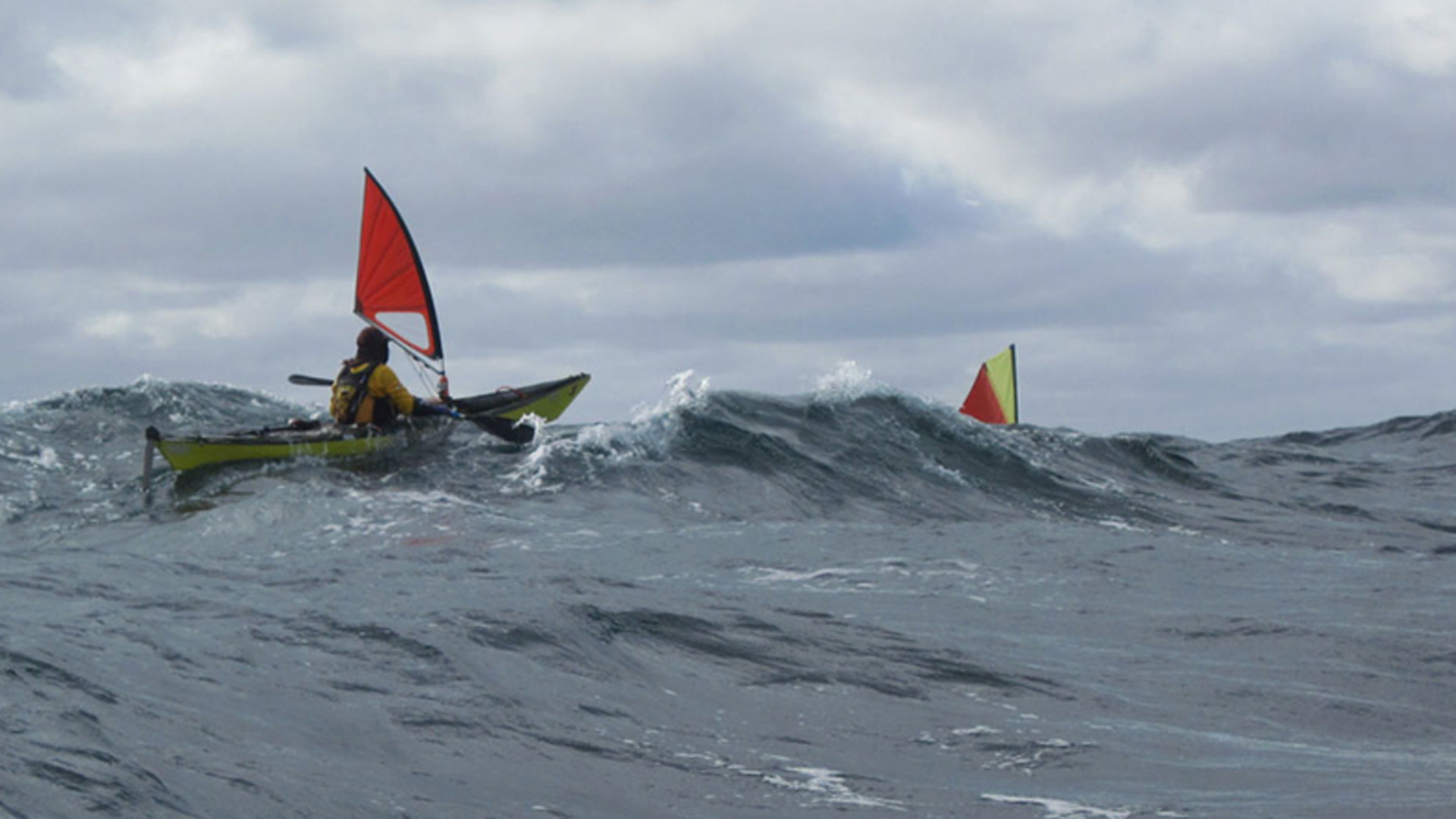 Four of the group flew across to Melbourne on the 5th and caught a bus to Port Welshpool, our departure point. Greg Simson and I travelled across to Melbourne on a Toll Transport ship with our cars loaded with 6 kayaks and a heap of equipment. We drove down to meet with the others at Port Welshpool and prepared for departure the next morning. A good mate of mine, Mick McRobb, drove down with his wife and son to pick our cars up and took them back to Bairnsdale for safe keeping.

The next morning we woke up at sparrow fart i.e 4 am and got ourselves ready for the big trip. It was a 300 metre carry to the beach from the Caravan park we were staying at but it seemed to get longer and longer with each carry. By the time we had 6 kayaks at the water’s edge we were knackered! We were on the water by 6 am. We had to start early because of the tide times and 6 am put us on the water not too long after high tide so we received a helping hand out of the channel as we paddled down to Wilson’s Promontory. Conditions on the first day’s paddle were beautifully smooth and peaceful for the most part although there were some reasonable swells rolling in that occasionally broke. The conditions were a bit choppier as we neared Refuge Cove, a beautifully sheltered cove on the southeastern corner of Wilson’s Promontory, 46 kms from Port Welshpool.

The next day the weather wasn’t suitable for the crossing to Hogan Island but on the 9th April we arose early again and were on the water well before sunrise.
We enjoyed a stunning sunrise that morning.

We had all read about how you paddle towards the horizon for an hour and a half before sighting Hogan Island but in our case it was a hazy morning with patches of sea fog and we didn’t actually spot Hogan Island until after the 4 hour mark. Naturally by this time Wilson’s Prom had disappeared so the only land we could see was 2 distant islands to the west of us. Genuine isolation. 360 degrees of nothing…. It was also unsettling to hear the fog horns of ships invisible in the fog ahead of us.

Conditions on the water were good with a low swell and little wind. We were able to sail for a bit of the way and after 55kms and 10 hours and 2 minutes we landed on Hogan Island.
Doing these long crossings in Bass Strait presents its own challenges due to the relatively strong tidal flows within the Strait. It isn’t a case of pointing yourself towards your destination and just paddling. You need to set a heading, sometimes well away from your destination, to allow for the tidal flow pushing you around. In the case of the crossing to Hogan Island, I calculated that we needed to aim for a point 12km north of the actual island and the current did the rest for us. I had access to some extremely detailed tidal current information for Bass Strait and this made it very easy to calculate the correct headings for the crossings.
I also had access to the net for weather forecasts but our most reliable source of weather information was from a fellow in Israel called Karel Vissal. Karel supplies forecasts for most of the major kayak expeditions worldwide and his forecasts were absolutely superb. He would send me emails morning and night with occasional updates in between. So we had very good information
To look after ourselves on the big crossings, we had a 5 minute rest stop every hour to have a bite to eat and a drink and 10 minutes rest for lunch. It was remarkable how quickly the hours seemed to fly past.

Everybody raves about the Kent Group of islands but Hogan Island has a real charm as well. It is a hilly island about 3 kms long with no trees, lush green grass, an old hut, thousands of penguins and rats and about 20 cattle but it was a wonderful place to visit. Scenic, wild but at the same time it had a friendly feel to it.

The following day we explored the island in a drizzly mist and enjoyed the squawk and squabble of the penguins that night, along with the rustle of the rats. It was a new experience for me to see a little humped shape running along under the tent floor as a rat passed through! Fortunately they were Australian Swamp rats so at least they were natives 🙂
The next day was sunny but blustery so we just lounged about or explored. 3 days after landing on Hogan we set out again, this time our destination was the Kent Group 46kms away.
Once again we had a pleasant although tiring crossing and after 7 hrs….. we landed on Erith Island. We weren’t able to sail at all and even enjoyed a head wind for some of the way.

The Kent Group of islands consists of Dover, Erith and Deal Islands and it really is a wonderful place to be. The water is a beautiful turquoise colour, the scenery is magnificent and you can feel the isolation in the middle of Bass Strait.

The group spent the next 4 days camped on Erith Island, exploring, relaxing, paddling over to visit Deal Island and just enjoying the ambience of the islands. Eventually it looked like we had a suitable weather window to make the biggest crossing to Flinders Island so on the 5th day we moved camp around to Winter Cove on Deal Island. This is the closest point to Flinders Island and it is where most groups crossing Bass Strait leave from.
The forecast was for winds of 15 to 20 knots easing late morning. Once we left the shelter of Deal Island we had seas of up to 2 and a half metres with a few breaking waves but the wind was on our rear quarter and with storm sails set we moved along very well.
My Rockpool GT really came alive in these conditions. Even loaded with almost 60kgs of supplies it was a real blast paddling through the bump and bounce. Mine was the only true skeg boat amongst the group and once again it dispelled the theory held in some parts of the world that “you have to have a rudder”.

As forecast, the winds eased late morning and just kept on easing to almost calm 🙁 Slowly, we draw alongside Craggy Island 37kms from Deal then after another 25kms kms we set foot on Flinders island. Everybody in the group had a real buzz at having completed the biggest crossing of 62kms in 9 hrs 20 mins.
The campsite at Killiecrankie where we landed was run by two lovely ladies that could not have been more helpful. We were to soon learn that this sort of friendliness is not unusual, rather it is the norm. Wherever we went on Flinders Island, people were friendly and helpful and it is a major part of the charm of this area.
We spent the next several days slowly working our way down the Flinders Island west coast, stopping when the weather was unsuitable, moving on when it was better. We visited some of the island offshore of Flinders including the notorious Mt Chappell Island, home of the biggest tiger snakes in the world. I was fortunate enough to see a tiger snake on the island, the only person in the group to see one 🙂 I had hoped to see one of the monsters but this one was only about a metre long.

We crossed Franklin Sound down to Cape Barren Island, then Clarke Island, landing in Spike Bay, an amazing place with huge granite boulders scattered all around the bay. After a relaxing day drying gear and lounging around we crossed the notorious Banks Strait in perfect conditions. It is amazing the way you come across really strong tidal flows just like a river running through the Strait. I can only imagine how nasty it would be in bad conditions. At one stage I was battling a tidal current, moving at 2 kph by my gps, 100 metres further along I was rocketing along at 10 kph!
Four hours after leaving Spike Bay, we landed on Tasmanian soil at Little Musselroe Bay.

We had paddled a total of 430 kms. The total trip took 22 days, with 10 days on the water. We began with 30 days food and fuel on board, my own kayak had a load of 60 kgs including 18 litres of water. I lost almost 5 kgs during the paddle.

All in all, a trip worth doing 🙂