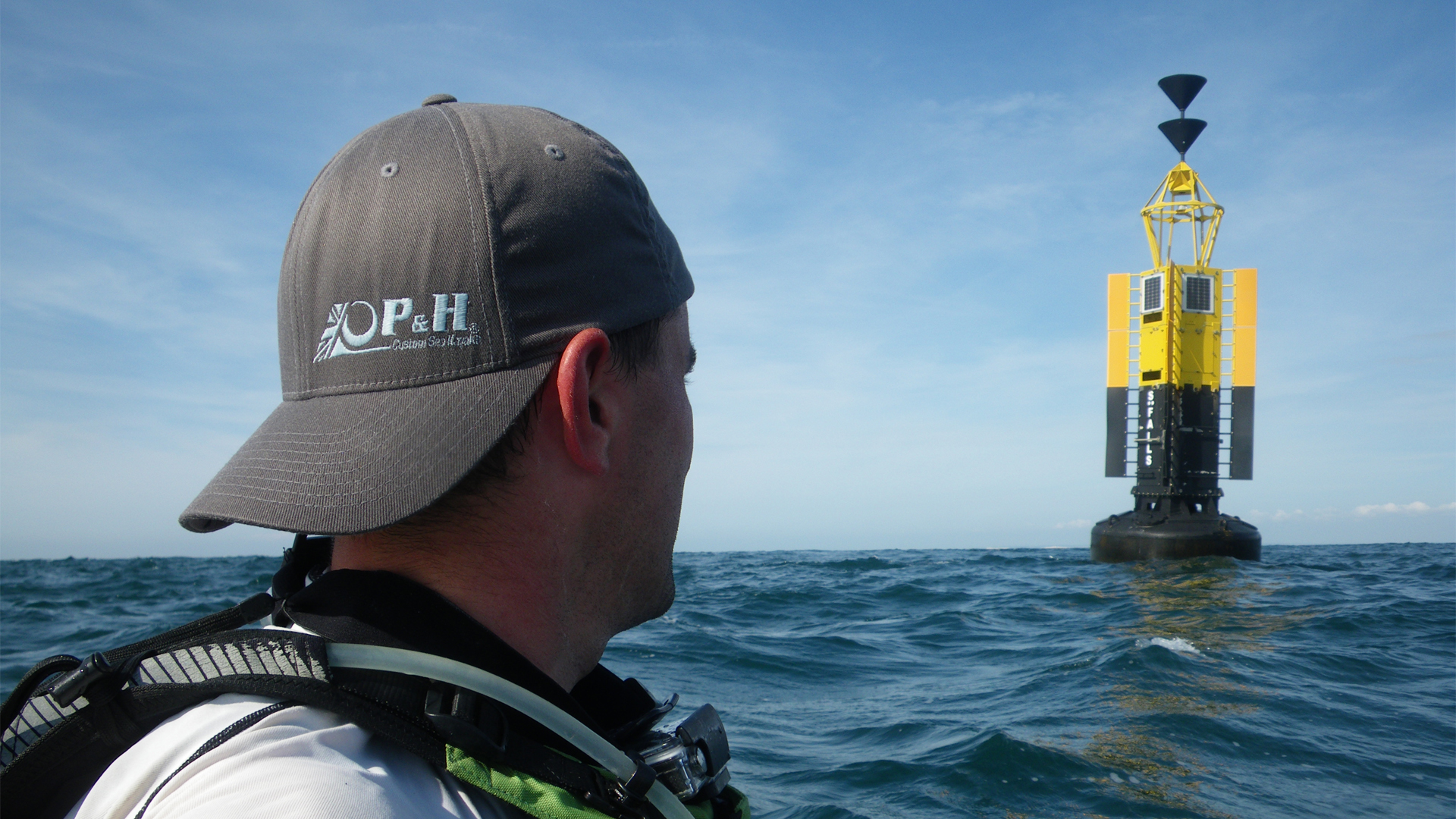 I have dreamed. I have prepared. I have trained hard. I have crossed the Southern part of the North Sea by sea kayak on 30 and 31 July 2015. Manpowered and alone, no support whatsoever and no support or pilot vessel. I have paddled during day and night time. I’ve been exhausted, excited and happy at the same time. This is my story.

I had this dream to do the North Sea crossing for years and now the weather conditions were perfect. So I planned, made calculations to counter the tide and prepared myself mentally.

On Thursday 30 July I’ve said my goodbyes to my family. Right before starting I sended a message to both the Belgian and the British Coast Guard to inform them of my plans and estimated route. At 21:30 hours sharp I sat in my sea kayak and paddled to open sea. I waved a last time when passing the pier to my family. I had luck, after sunset I had still some light because it was full moon. The downside was the current, full moon means spring tide! Just till the Trapegeer buoy I had the tidal stream in my favor. After that point, and that was fully calculated in advance, I had to paddle 6 hours against a strong tide.

At 04:48 hours I arrived at the DY1 buoy. It was slack at that point, tidal current should change direction soon. I had radio contact one last time with Marc, the friendly radio operator from the Belgian Coast Guard (Ostend Radio) to give him my current position and state. He was in close contact with Sylvie (my wife and support team) to keep her informed. After that point I was on my own until I was in reach with the British Coast Guard. 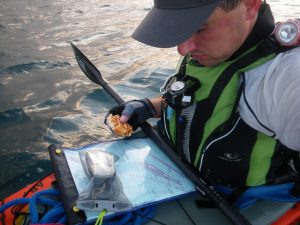 I paddled on, with the current in my favor this time, to the buoys Ruytingen SW and Ruytingen NW. In the meantime the sun was rising what made the crossing of the international fairway a bit easier. According to the Coast Guard almost 500 sea ships are passing through that lane every single day. I had to keep watch in order to stay as far away from those big ship as possible. Doubt that they would even spot me! 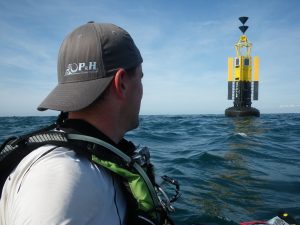 So I this section I paddled as hard as I could having a strong tidal current on the right side. I managed to get over the shipping lane, along the buoys Sandettie WSW to the South Falls without troubles. I only spotted 4 big sea ships but I’ve passed them at a longer distance. After that I changed my course and diverged from my planned route to a secondary planned route. Did that in order to counter the very strong tidal current that was pushing very hard on my right side. So I went to the E Goodwin light ship. At the light ship I established radio contact, this time with the Dover Coast Guard. They we’re already fully aware of my intentions and also keeping my wife informed of my position and state. I was treated very friendly by the crew on the radio (as was my wife). 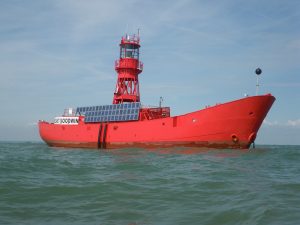 The E Goodwin ship is an unmanned lightship that brings seaman the very treacherous Goodwin sand banks to their attention. Dangerous for almost every other vessel but ideal conditions for a seasoned kayaker. With almost no wind at all there were wave between 0,5 and 1 meter height! In that area I’ve seen numerous seals. Wonderful!! The sand banks we’re the last piece of the crossing. After that I’ve sat sail to Ramsgate harbor. The tidal current was now pushing on my left side so I had to compensate a lot in order to reach the harbor. 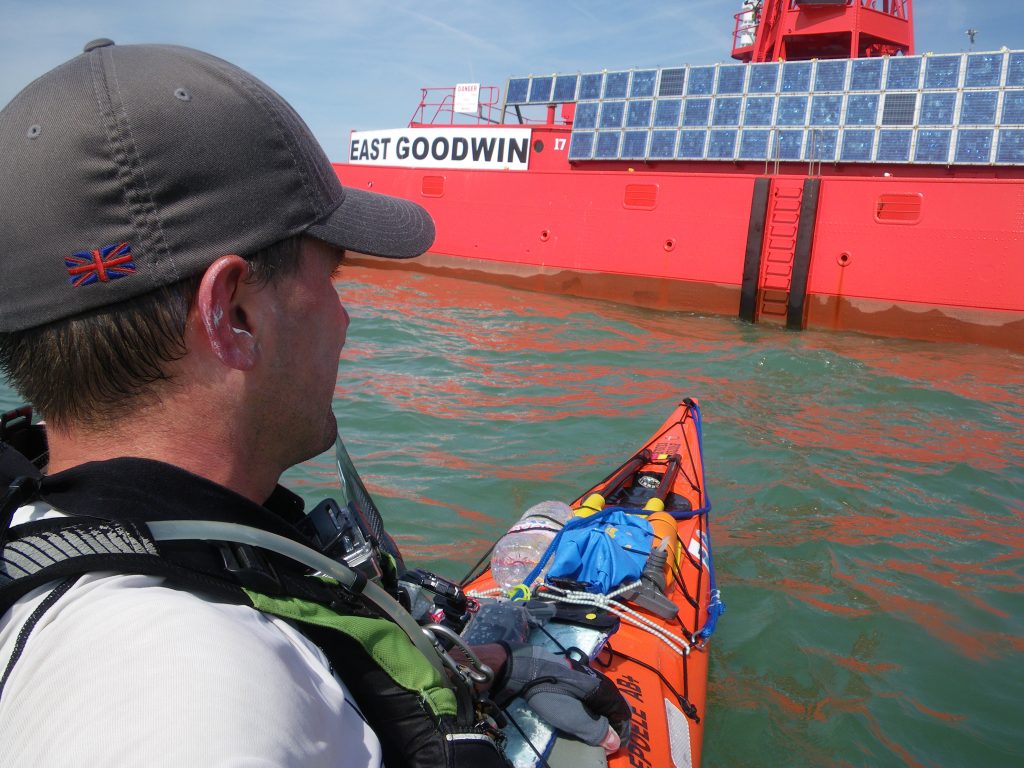 I reached the slipway in the harbor of Ramsgate at 15:06 hours (Belgian time). I was so far ahead on my estimated planning that my support team had not arrived yet. Luckily I was prepared for that, I had dry clothes and plenty of food and drinks with me. After a few hours my lovely wife and kids arrived, it was a happy reunion!! We took the ferry back to the mainland.

I wish to thank my wife Sylvie for her constant support in the chasing of my biggest dream, the North Sea crossing as well in all my other so called foolish plans regarding sea kayaking! I want to say thanks to Marc, the radio operator from the Belgian Coast Guard – Ostend Radio for looking an eye out for me just until the DY1 buoy! The same count for the friendly crew from the Dover Coast Guard! To those people; your help is very much appreciated both by me as by my wife! 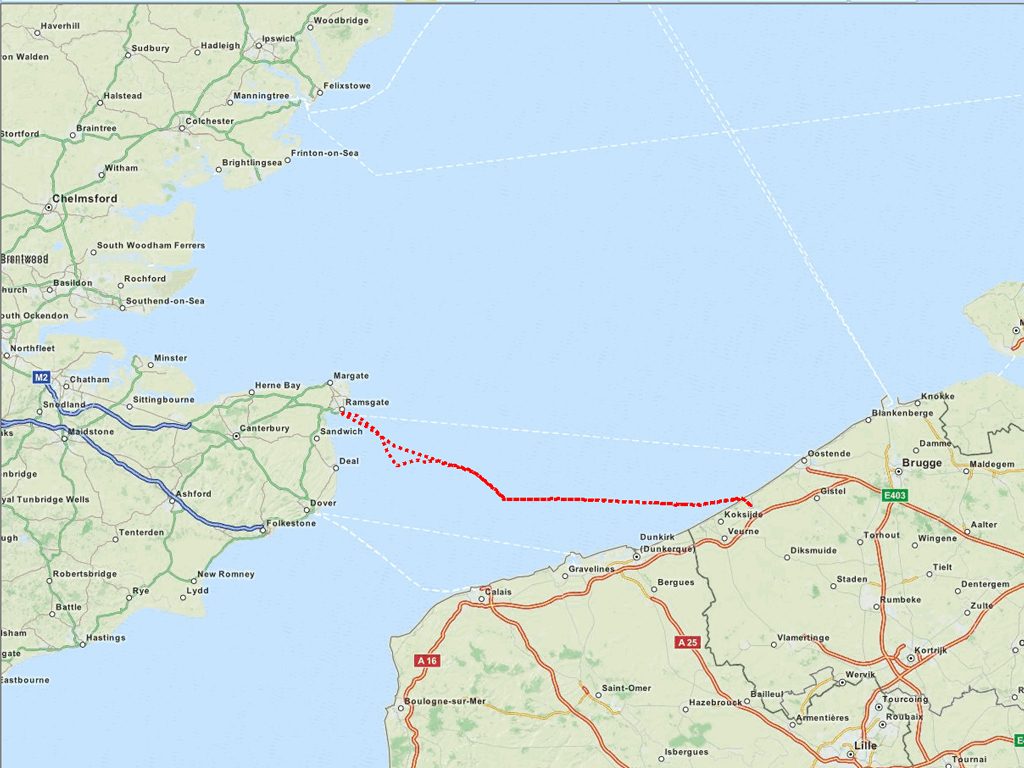 We hope with this crossing to put Belgian sea kayaking on the map! A big thanks to my other Northseakayak-members for their continuous support!