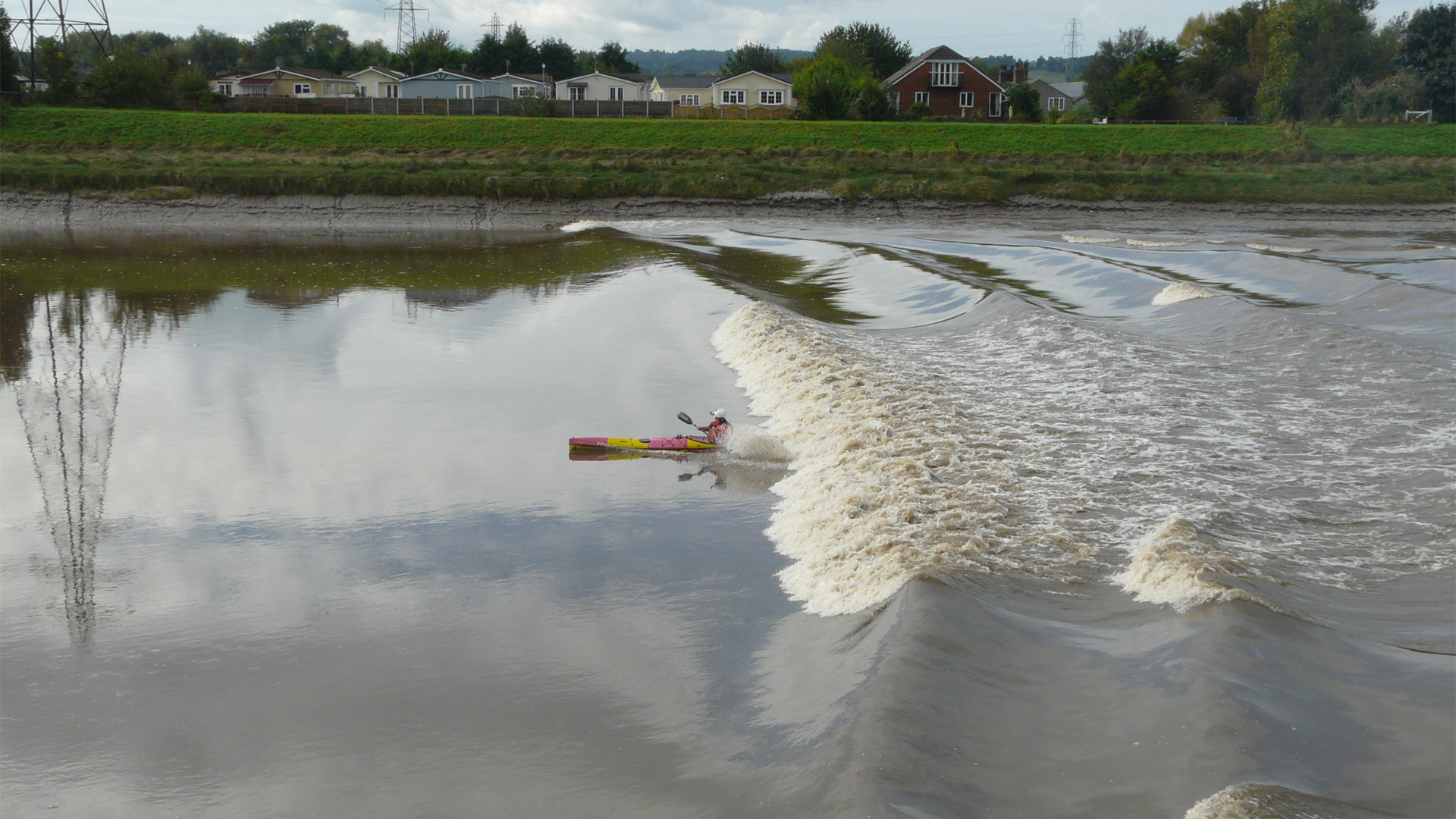 The UK has a number of rivers that form tidal bores. From a kayaking point of view many of these are surfable – to an extent. While some provide a dynamic, boisterous challenge, others are little more than a tick-in-the-box for the ‘bore-spotter’.

For a bore to form we need a wide, flat estuary that quickly narrows into a relatively shallow river. After the incoming flood tide crosses the wide estuary and reaches the narrow river channel it is ‘confined’ and surges, causing the formation of a vertical wave. This is the wave we use to surf.

In the UK bore waves vary from a few inches high to a number of feet. Their form can vary between a green wave to full-width broken soup. Timings are usually predictable for incoming bores, though they may vary due to weather and river-levels. Wave conditions can vary greatly however, with river-levels being the most significant factor. Atmospheric pressure and wind direction/strength also have an effect.

The River Dee ticks a number of boxes nicely. It provides a fairly clean surfable wave that runs for around 3 miles, giving a ride of 30 minutes or more! It is relatively easy to access, is predictable, fairly consistent and rarely crowded.

While the Dee Estuary is over 3 miles wide for the most-part, it quickly narrows downriver of Connah’s Quay. Here the river enters a narrow canalised section, which runs to the outskirts of Chester, where it returns to the meanders of the original river.

The canalised section begins downriver of Queensferry and runs dead-straight for 3 miles or so, to Saltney Footbridge. This gives it a fairly consistent and predictable wave, which forms across the full-width of the river channel for much of the length. In the Right conditions the wave is surfable all the way to Saltney.

Downriver of the ‘Blue-Bridge’ at Queensferry, the channel is a little over 100m wide, while at the upper reaches it has narrowed to around half of this.

‘Downriver’ and ‘Upriver’ relate to the usual flow of the freshwater river (not the incoming flood) i.e. a location downriver of Chester would be nearer to the sea.
‘Left’/’Right’ bank relate to the direction of paddling at the time – look to your left – that’s the Left bank.
All tides relative to Liverpool (Gladstone).

There are 3 options really:

Easy parking.
Fairly easy get on – maybe a little muddy. Sometimes danglers are to be found here.
Downside: you have a 3.5 mile paddle to meet the wave – making timing a little trickier.
Upside: you will have a fairly short paddle and easy-ish get out at the end.

Limited parking.
Access to the river bank is easy (S bank) but access to the water is tricky – there is plenty of mud. (Don’t get stuck with the Bore coming in!)
Downside: long paddle back or shuttle needed to Saltney (or alternative get-out).
Upside: you are only a few hundred metres from catching the wave – timing is easier.

Easy parking.
There is a slipway to access the water but it can have a copious coating of mud.
Downside: Even longer way to paddle back – a shuttle or alternative get-out is required again. Don’t get fooled by the wave forming before the Railway Bridge – there’s a good chance it will fade before the Blue-Bridge. (See later.)
Upside: close to the ‘start’ and gives the longest ride.

A broken full-width wave has formed as it rounds the corner on the way out of Connah’s Quay. But as the river deepens near the Railway Bridge it may fade, to reform short of the Blue-Bridge. Soon there is a sneaky-fade, just before it reaches the Dual-carriageway bridge (A494) where it finally reforms, to then stay the distance.

I think it is best to catch the wave about half-way between the Blue-Bridge and the Railway Bridge – however be aware of that false-reform and sneaky-fade before the Dual-Carriageway Bridge. A sprint is required here – use the eddy tight on the Left bank. The Right will do too, but can be shallow and a little rocky.

If the conditions are good then the wave will run all the way to Saltney Footbridge, and beyond. It will fade and form as it goes, anything between full-width green, part-broken and full-width broken. In the early stages after Queensferry you may get 3-4ft. As you move further upriver then the wave height will generally decrease to 2-3ft by Saltney.

Keep your wits about you and be prepared to move across river to catch the best wave. Daydream and you will get caught out. 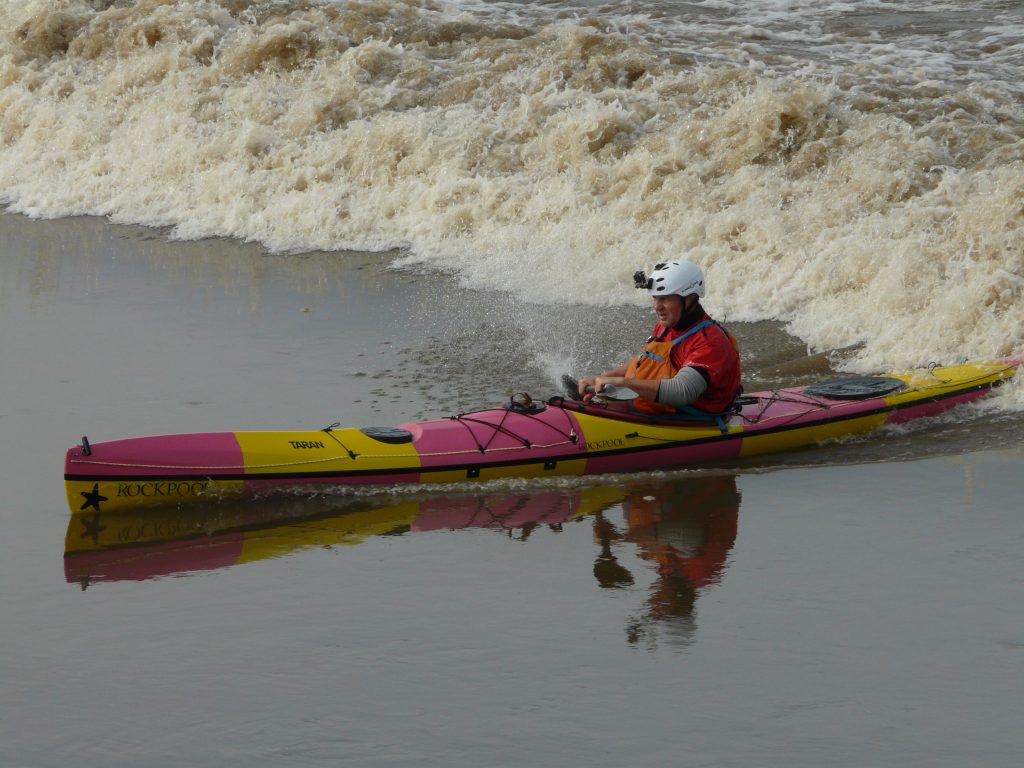 Close-before the Saltney Footbridge it shallows on the Left, so set up before on the Right.

After Saltney Footbridge things get a little trickier. There are two 45-degree bends; the Left bank is shallow and feeds on both. On the Right it is deeper but faster and flatter. Right to Right-of-centre gives the better option. Beyond the bends, on the final straight, the wave pattern can become confused and fade and re-form a number of times. Take what you can get – Right bank is probably better.

Later, just before the 90-degree bend at The Cop, the wave may reform for its final hurrah. You’ve done well if you’ve made it this far.
Now the flow will take you to Chester if you desire, however the wave is effectively done. It’s a pleasant paddle, but adds distance to the return journey. Beware of the weir and fish-ladder in Chester – both can be dodgy at certain river levels/parts of the tide.

The Airbus loading ramp – about 2/3rd way along, on the Right bank – marked by a series of large metal stanchions a few metres from the bank. Craft maybe moored here.

Large pieces of detritus and rubbish will be lifted from the river banks – beware.

Stretches of the water’s edge may be hull-gougingly rocky – both banks.

Be aware of other wave riders – sea-kayak bongo-sliders are rarely welcome.

Your options are basically your get-on locations – Saltney Footbridge, Queensferry or Connah’s Quay – wait for the tide to ebb before slogging back.

There is a sneaky get-out option at the 90-degree bend at The Cop, but you will have to wait for the water levels to rise, and it may be overgrown in the summer. Car parking is limited to a small section of rough ground.

Alternatively, with the luxury of a shuttle or a driver, you may want to continue into Chester to get-out in the car park at Sandy Lane – if the weir is safe to paddle over.

The Dee Bore wave tends to reach the Railway Bridge/Blue Bridge about High Water Liverpool -1:50 / -1:40 – but timings are approx.

The best waves come from 9.5m tides up, but may be useable below that. Expect more white-water on 10.0m tides and up. 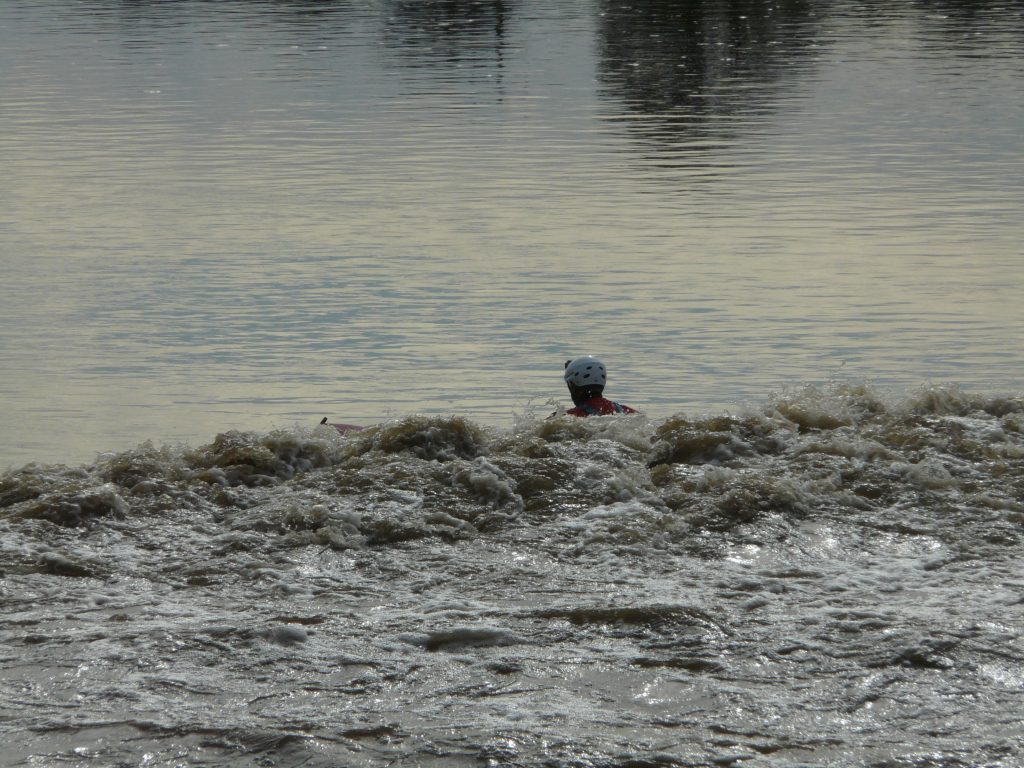 Use a fast boat – you’ve got a better chance of getting back on or catching a second wave. A short boat works better in the soup but you may suffer from lack of speed when you most need it.

You may need to seal-launch to get in.

Keep the boat straight – if you want to ride the front wave it’s a one shot affair – have a broach and the day’s probably done.

If you do find yourself in a ‘bongo’, be patient and wait until things are ready, then quickly push the bow back upriver. Stay away from the shoulder, or the bow is likely to ‘peel’ downriver, then the bore will continue without you.

If you drop off the front wave, all is not lost – but you will have to react quickly. Don’t let the boat turn downriver. There are secondary waves that surf fine, grab one quickly.

If you want to try to get back on the front-wave, then head quickly to the nearest bank and use the slacker water to work your way back up. It is possible but may involve long, hard-work to get there. At times it can get a little claustrophobic close to the ‘fast-moving’ bank.

When the wave starts to fade you need to paddle hard – as the water depth increases the wave will decrease and speed up – you need to pull hard now, if not, you will watch it reform ahead of you. 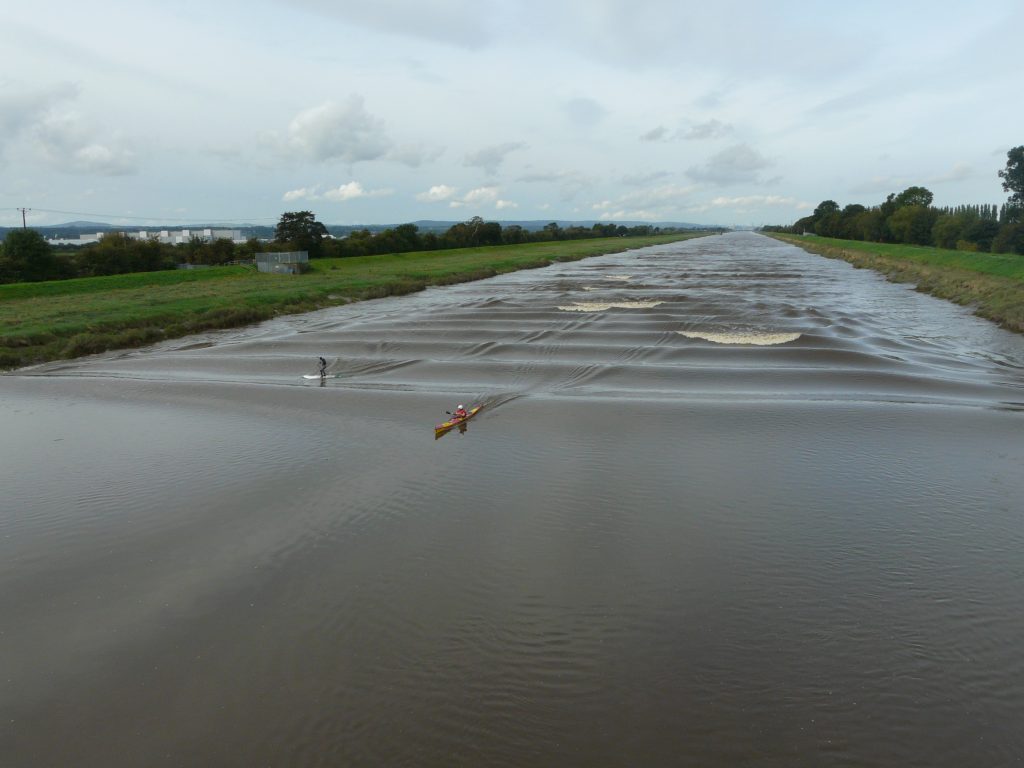 And finally, for a feel for what it is like, here is the view from the driving seat:

More views of the Dee Bore on the PSK YouTube Channel:
https://www.youtube.com/playlist?list=PLqzC-41FmRz0YBAXQ8KbB9b_EQkFd-WXo

Other UK Bores to consider: