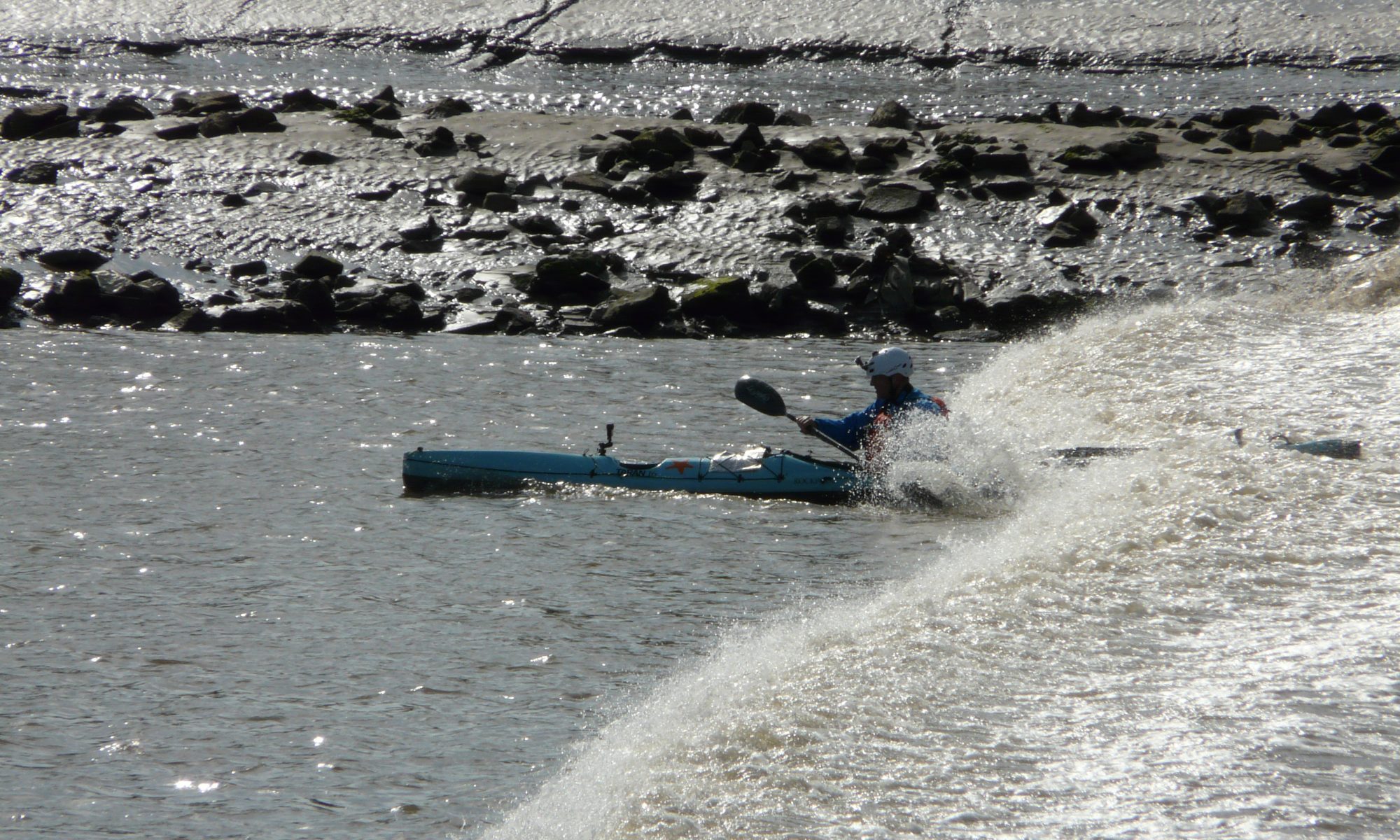 The debate whether to choose the Rockpool Taran 16 or the Taran 18 rages at the moment.

A decade ago I designed the Taran 18 and then the Taran 16, and of course I’ve been paddling Tarans ever since.

This piece is not aimed to be a ‘which-Taran-should-I-buy’ guide. That decision is down to you as a paddler, based on your experience, ability and aims.

What I try to do here is to compare some handling characteristics that I’ve come to know over a decade of Taran fun. Some of it is quantifiable, but much is subjective.

It’s down to you to decide if it is useful. Of course the weight depends on the specific construction. All things being equal we can expect a T16 to be lighter than a corresponding T18 though.

However there is a little more to take into account. We have to allow for the fixed weight of various fittings such as cockpit rim, seat, bulkheads, hatch covers and rims, footrest and rudder system. Totalled up, these come to around 6 kg of fixed weight. So any weight saving of the T16 only comes from a shorter hull/deck ‘shell’, not the finished boat.

If we take the example of a 22 kg boat (say), subtract that 6 kg gives us a ‘shell weight’ of 16 kg. Now subtract the 8% for the shorter T16 and that gives us a weight saving of 1.3 kg. Not a huge saving but useful all the same.  (This is an approximate figure, we also need to take into account the tolerance of hand-made manufacturing.)

The T18 (unsurprisingly) has greater volume than the T16 – you can fit more dry bags inside in the T18. However unless you have extremely long-arms, that extra volume is not always useful for practical storage. The T16 is not greatly disadvantaged here, unless you want to take everything.

Deck fittings and hatch layout are pretty much the same across both boats.
Both cockpits are alike for all intents and purposes. The front deck is very slightly higher over the footrest in the T16, and the cockpit waterline volume is slightly different too – but day-to-day most people won’t notice.

(Update: The deck at the front of the cockpit is slightly higher in the T18. This means that your effective leg length will be a little shorter, and hence in combination with the slightly sloping front deck, you may find slightly more footroom in the T18).

The shorter T16 means that lifting and carrying the boat is easier. While you may consider that the extra volume or speed of a T18 may be the deciding factor for a long-distance exped, personally I’d take a T16 – just because it is easier to shift around when off the water.

A big part of the design ethos of the T16 was to make it as close as possible to the T18 in speed. We wanted to overlook the ‘rule’ that a ‘short’ boat had to be slower. And we were pretty close there I think.

The T16 is slower than the T18 top-end. However not by much – assume 5% or less and you won’t be far wrong. Once again there is a little more to it of course – some conditions favour the T16 and some favour the T18. Some days the T16 may be the faster boat.

On flat water I would choose the T18 – throw in some wind, waves, downwind or turns and the decision needs a little more consideration.  The T18 leads my fastest TT times; however there are  a good many T18 times behind my fastest T16 time too…

On the whole the T18 is slightly ahead (literally) – but not by a huge margin.

While top-end speed goes slightly in favour of the T18; ‘sustainable-cruise’ and ‘fast-cruise’ pace are (strangely) pretty much the same for both boats – however I feel that I have to push a little harder in the T16 to maintain that same pace.
While ‘glide’ is not often used in the same sentence as ‘sea-kayak’, in the case of the Tarans I just feel that the T18 does it better.

Smoothly done by the big-boy – the T18 gets this one.

Purely subjective here I am happy to admit. In training I feel that the T16 slightly out accelerates the T18 from low-speed or a standing starts. However from medium-pace onwards I think the pendulum swings in favour of the T18.

Once again, you win some you lose some. Unless you are doing plenty of head-to-head fast-intervals it’s probably not going to be relevant anyway. 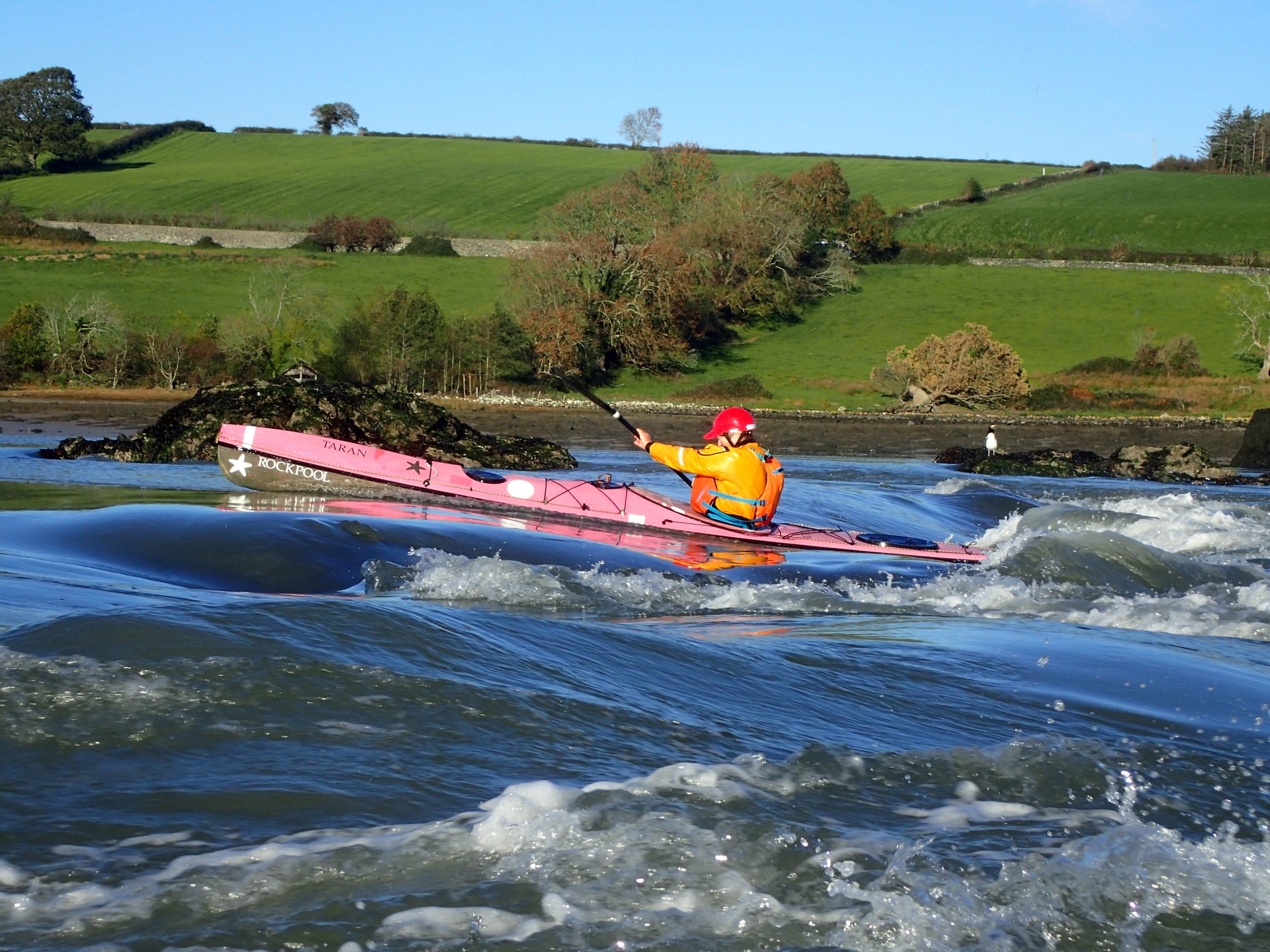 We expect the shorter T16 hull to make for a more manoeuvrable boat, and that seems to be the case.

So the T16 has a tighter turn radius and turns comfortably inside the T18. A consideration for repetitive backwards-forwards paddling of tideraces, surf sessions etc.

Drop the rudder on both boats and they ‘lock’ nicely into the water. Directional stability becomes both precise and accurate. However I feel that the T16 suffers a little from ‘rudder-squat’. Drop the rudder and the stern suddenly seems to ‘sag’ – it feels a little sluggish in a way that you don’t notice in the T18.

I feel that rudder drag in the T18 is not realistically measurable; for me the jury is still out on the T16.

The longer T18 demands more from the rudder though. It is more likely to go into ‘rudder-stall’ in tight turns than the T16 – but we already know the T16 has turned inside you by now anyway.

So it’s swings and roundabouts, whichever boat – drop the rudder and paddle.

It’s more black and white when we lift the rudder though, we find the T16 provides a decidedly sharper response to edge-steering inputs. The longer hull of the T18 can ‘hesitate’ a little, and without ‘counter-lean’ may over-turn. The T16 rudder-up handling is crisp, precise and easier.

The T18 has a smooth and linear stability. What you get at the start is what you get throughout the range of your edging. It is smooth, gradual and predictable – in pretty much all conditions.

I feel that the stability in the T16 is a little more two-stage and not quite as composed though. Every now and then I find the T16 ‘catches an edge’ – something I don’t come across in the T18.

For me the T18 has the edge (pun intended) over the T16 on stability. 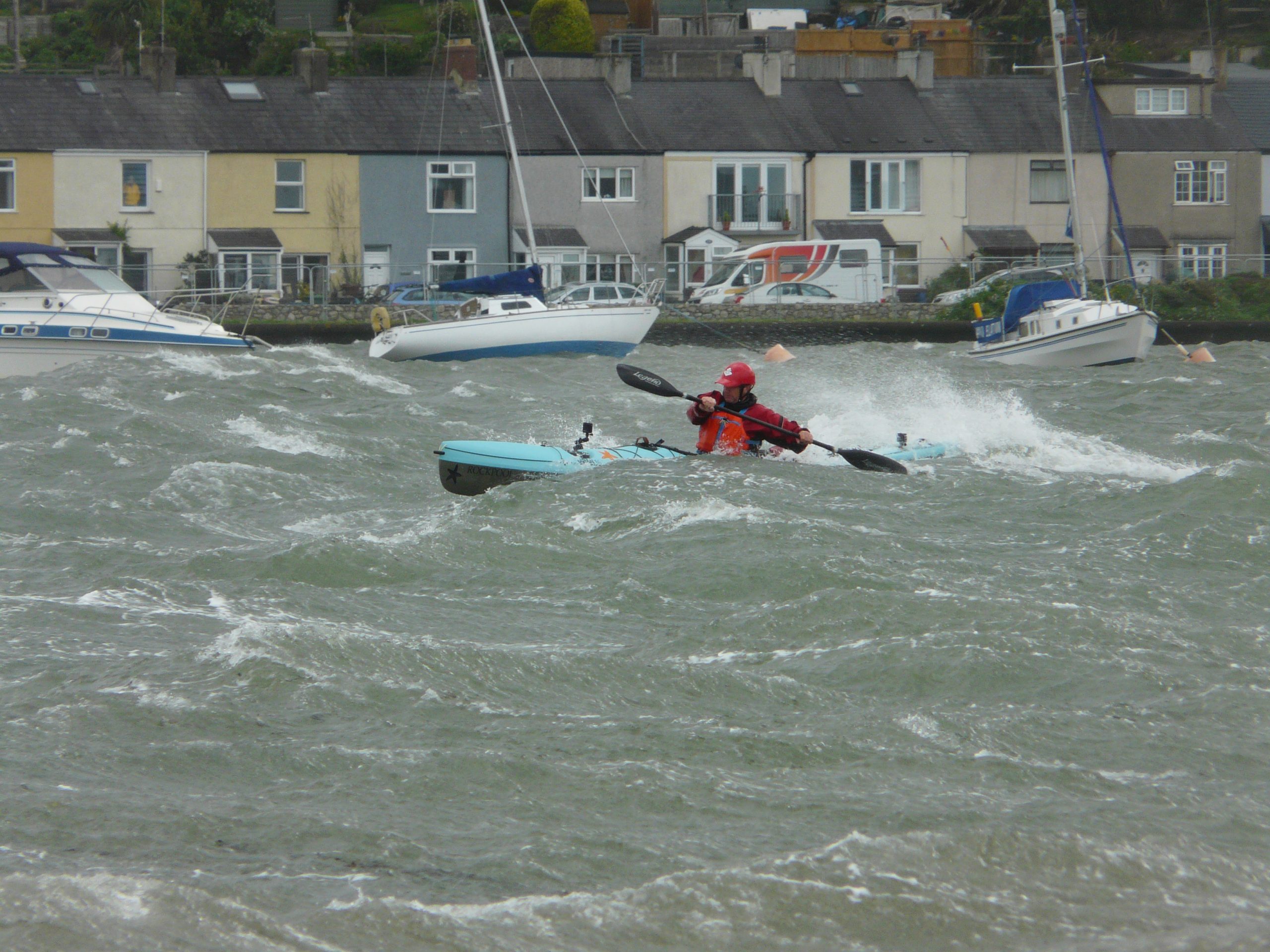 I feel that the T18 just pushes on a little easier into headwinds than the T16. However in very strong winds this advantage may be negated by the better bow control of the T16.

The ‘bow-cone’ on the T16 is wider than that on the T18. So paddling into very strong head-winds and cross-winds, the T16 bow is easier to control than the T18 – especially at lower speeds.

Bow slam – both boats are long waterline boats with high-volume bows. In certain conditions they can slam. The shorter T16 seems less-likely to do this; get the relevant wavelength of course and you can get ‘slam’ from either boat. The T16 is better on the whole, often giving a smoother ride into waves.

Both boats favour (and lose) to certain conditions. It’s swings and roundabouts once again, though whichever boat you choose, sod’s law states that you probably want for the other on the day.

When paddling longer distance in steady cross-winds, I feel the downwind-drift is slightly more pronounced in the T16 – though the rudder should be easily capable of countering this.

The T16 hull carries the pronounced volume further rearward than the T18 so it takes off well on waves, it accelerates nicely – and on smaller waves than you may expect. However the T18 catches smaller waves even earlier.

When running downwind and ’pushing through’ small waves the T16 bow tends to rise earlier and is more pronounced than the T18. Sometimes this limits the ‘push through’ that you would expect from the T18. Overtaking small wave packets is easier in the T18.

The big-boy wins this one with a smug smile, though as the waves grow in size the advantage is negated

On larger waves, as boat speed becomes limited by the waves, then the better boat is defined by the wave characteristics – take a T16 on steeper waves and T18 on ‘rounder’ waves.

On larger waves there is little between them – each boat favours different conditions.

Running fast down a wave I find that the T16 bow is less likely to bury than the T18 in small to medium waves. However the opposite is the case in larger waves.

The T18 has a nice habit of putting the brakes on for you. Whereas the T16 just cleans out your sinuses…

When surfing a wave, the longer hull of the T18 means that the rudder sits higher, which in turn means ‘rudder release’ is easier. If this is your style of paddling then the T18 takes a slight advantage here. 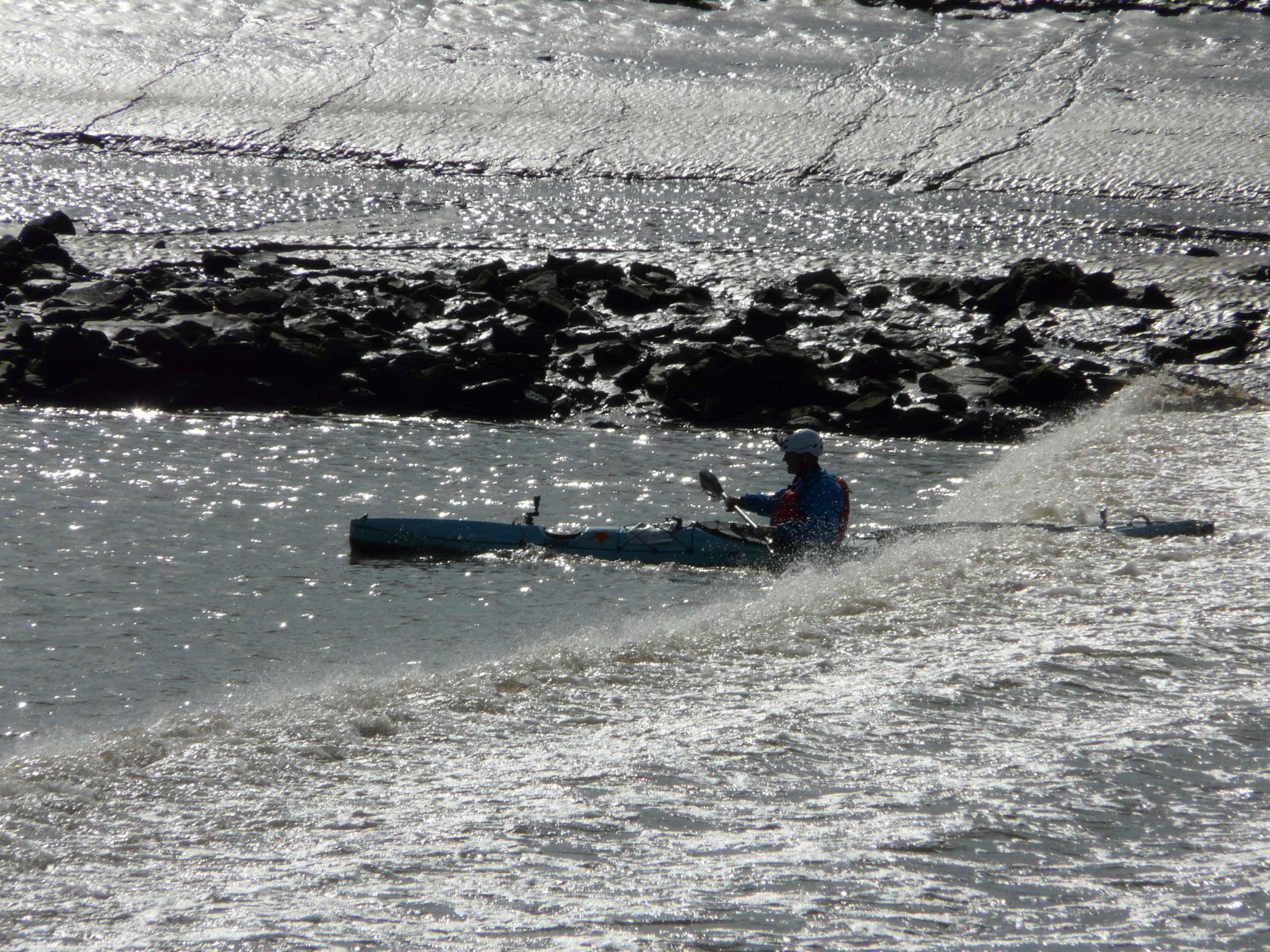 All said and done, both Tarans love surfing waves…

And if all of the above does not help you decide, then maybe consider your garage.

The T16 may be a better fit, whereas the T18 may require some snazzy 3d corner-to-corner storage plans. It may not be the top of your consideration list, but it may save a little frustration later.

Size does matter it seems – the T16 wins here.

Both the Taran 18 and the Taran 16 have advantages and disadvantages over the other, and specific conditions and paddling aims tend to decide these.

For most sea paddlers, if you can’t choose between, and you are only looking for one boat, then I would say go for the T16.

If you have the luxury of owning more than one Taran, then add one of each and enjoy the learning experience that comes with comparing them.

For me, well I’ve got both of course.

I guess I view the T16 as the slightly boisterous, teenage upstart, whereas the T18 is the more refined elder statesman, slightly aloof but dependable and knowledgeable.

Personally I think the T18 teaches you about paddling, while the T16 does it for you. 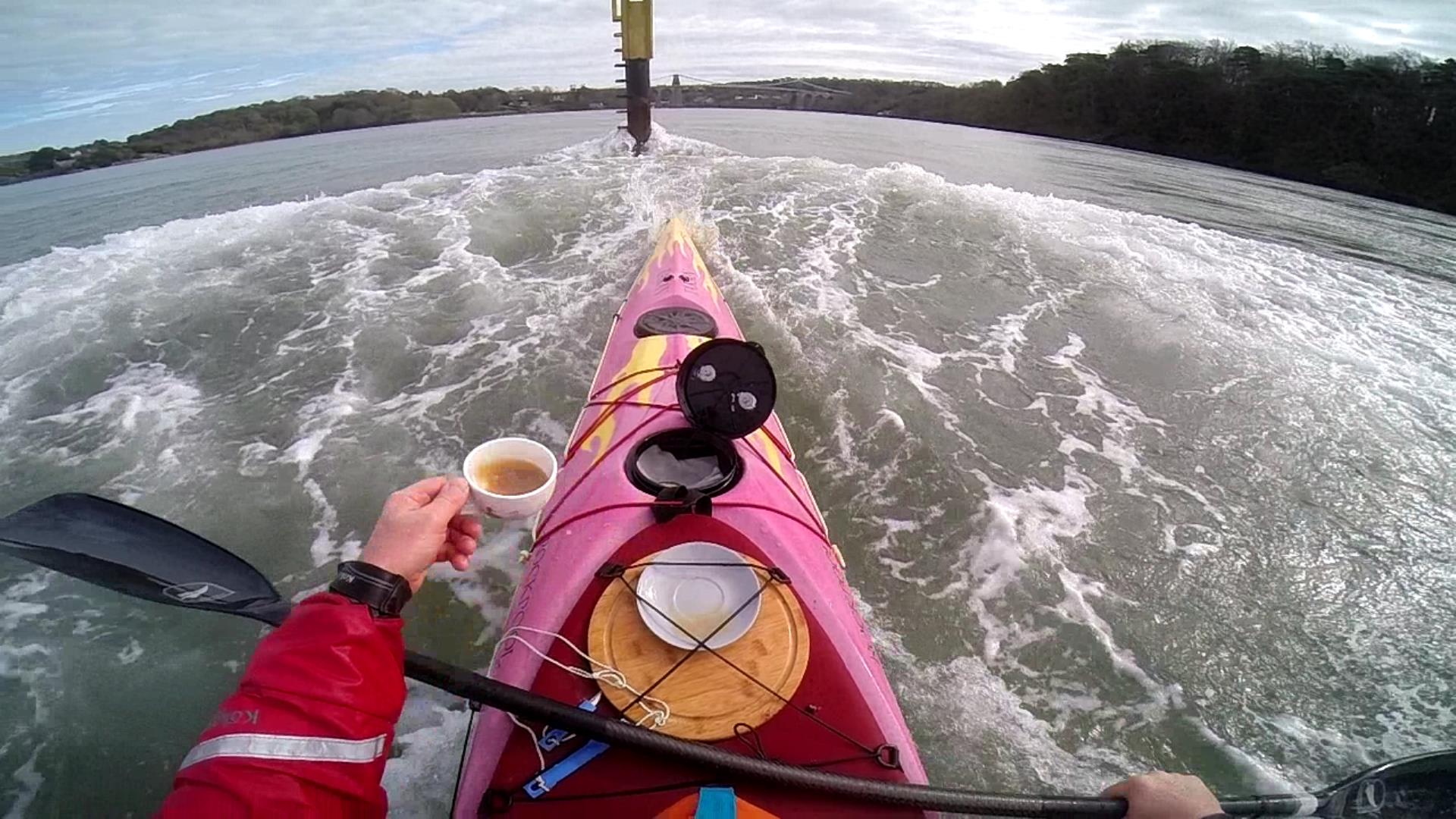