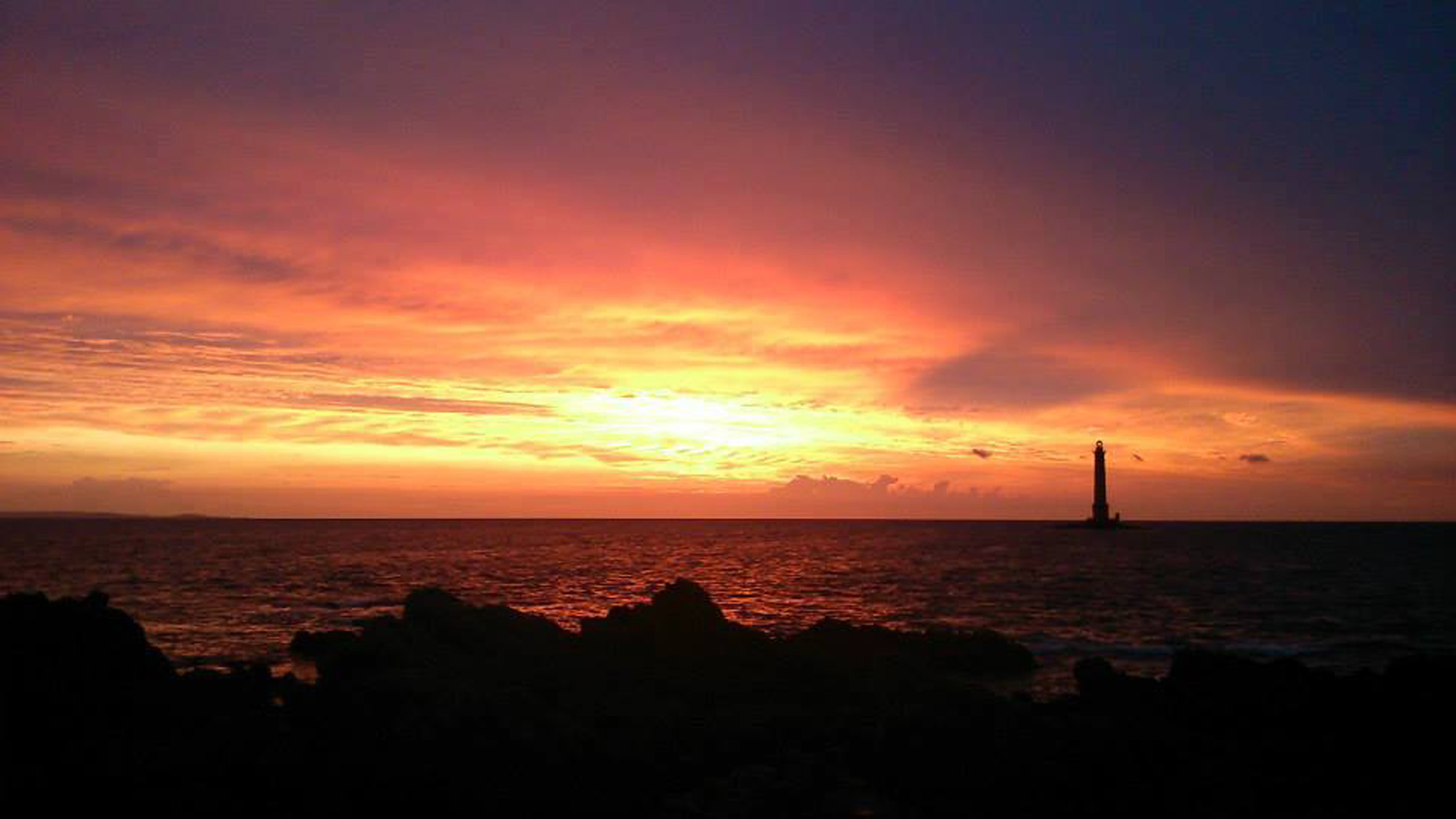 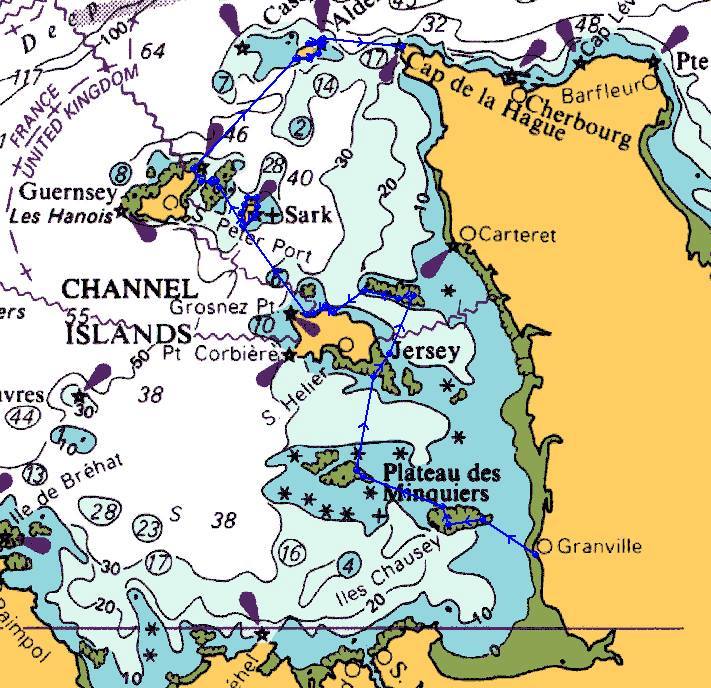 Numerous beautiful and varied islands and reefs, challenging tidal conditions and open crossings, using the southernmost toilet in the British Isles, the potential chance to annoy the French or cause an international incident. 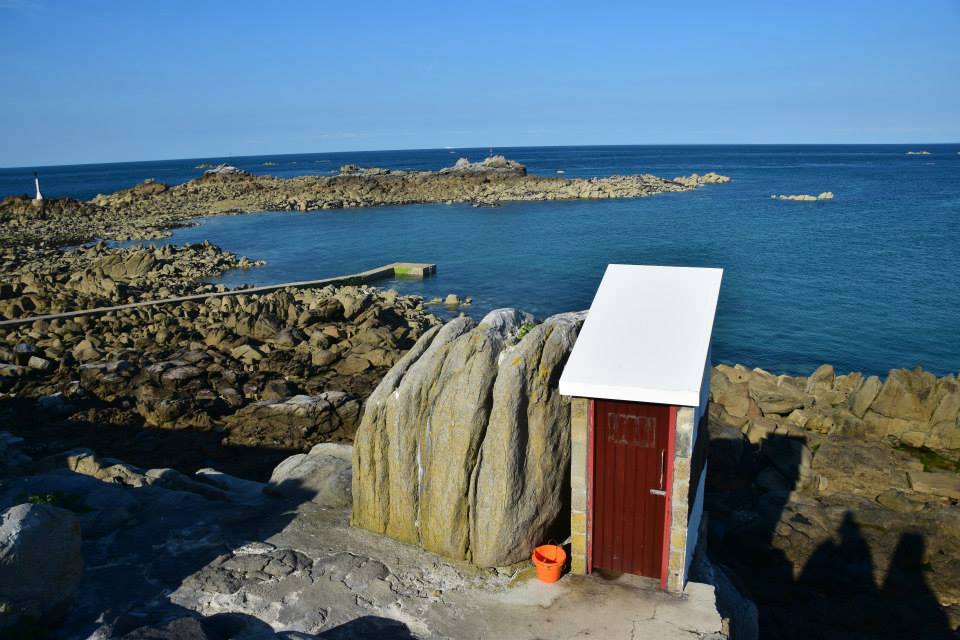 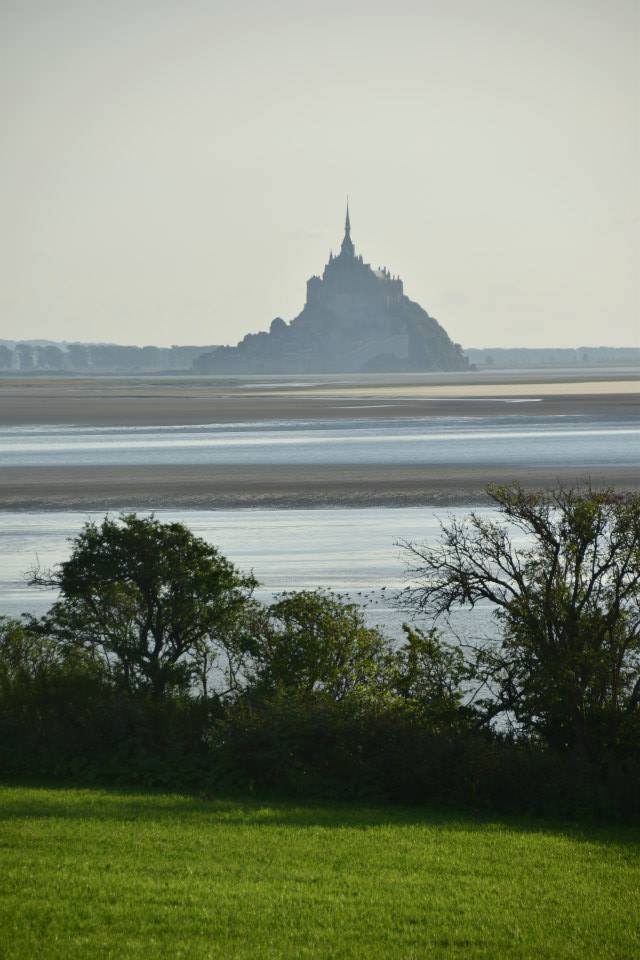 Minimum distance about 180km (we paddled about 200km in 2015), potentially much longer if you paddle around the large islands of Jersey and Guernsey.

Simply join up as many of the Channel Islands and reefs as possible! We took this route, camping at each point: Granville, Iles Chausey (French), Minquiers reef, Ecrehous reef, Jersey, Sark, Herm, Guernsey, Alderney, Goury. 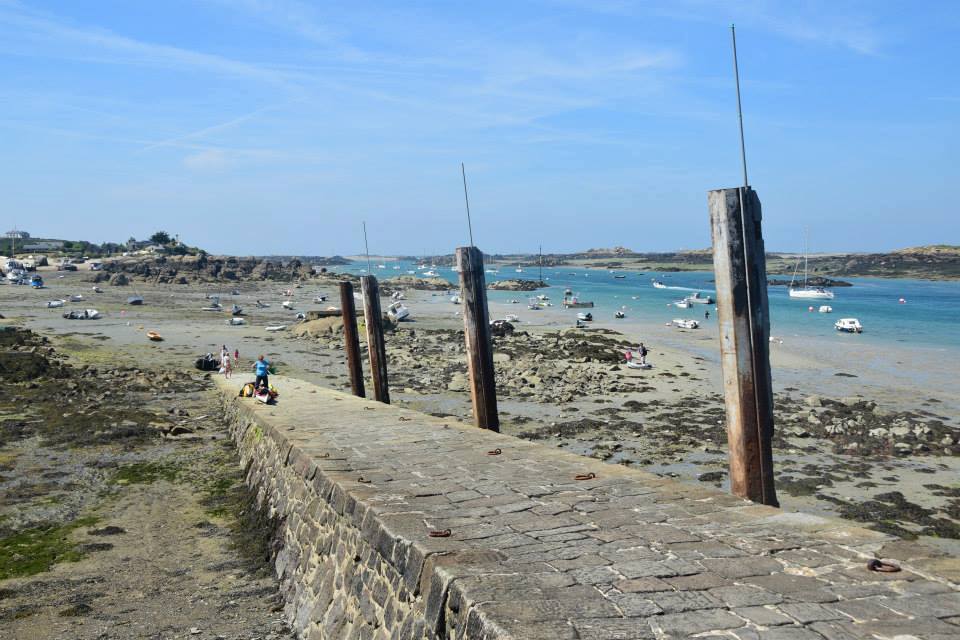 The open crossings range in length from a few km to 50km, the success of the trip mostly hinges on whether you have the weather to tackle these exposed hops in safety. Tidal conditions verge on the extreme, this being the third highest tidal range in the world. For example, the Minquiers reef varies from the size of a football pitch to half the size of the Isle of Wight, depending upon tide, whilst the final open crossing (the Raz Blanchard) traverses one of the most notorious tide races on the planet. 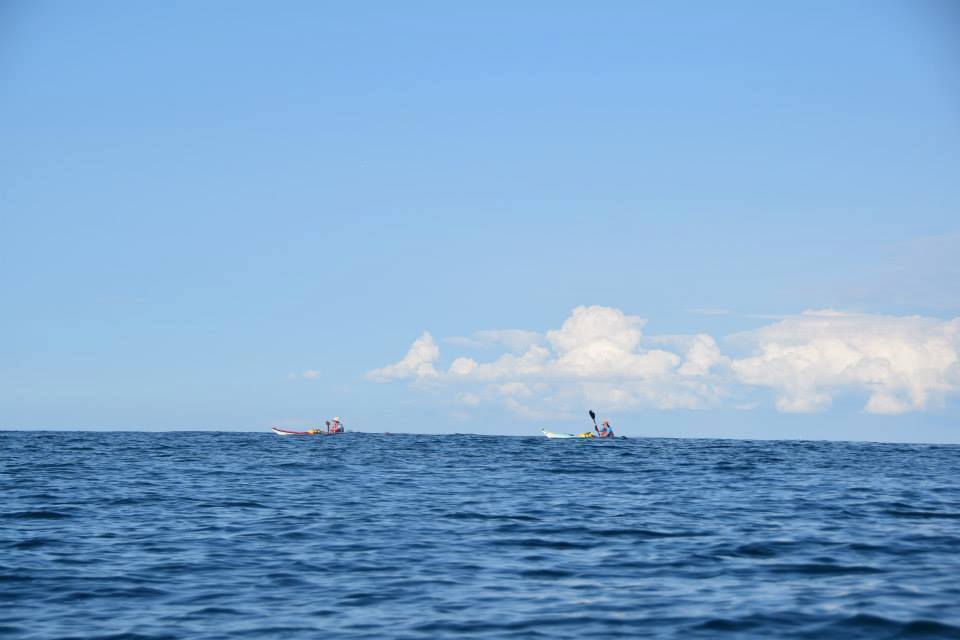 Each ‘hop’ between islands required you to sit down afresh and think through a relatively wide range of variables…wind direction, strong tide flows, traffic, landing/ launching spots (a real issue with a 10-12 metre tidal range), etc. None of the crossings are heroic, but they all require a particular set of factors to drop into place, to keep them from being heroic. 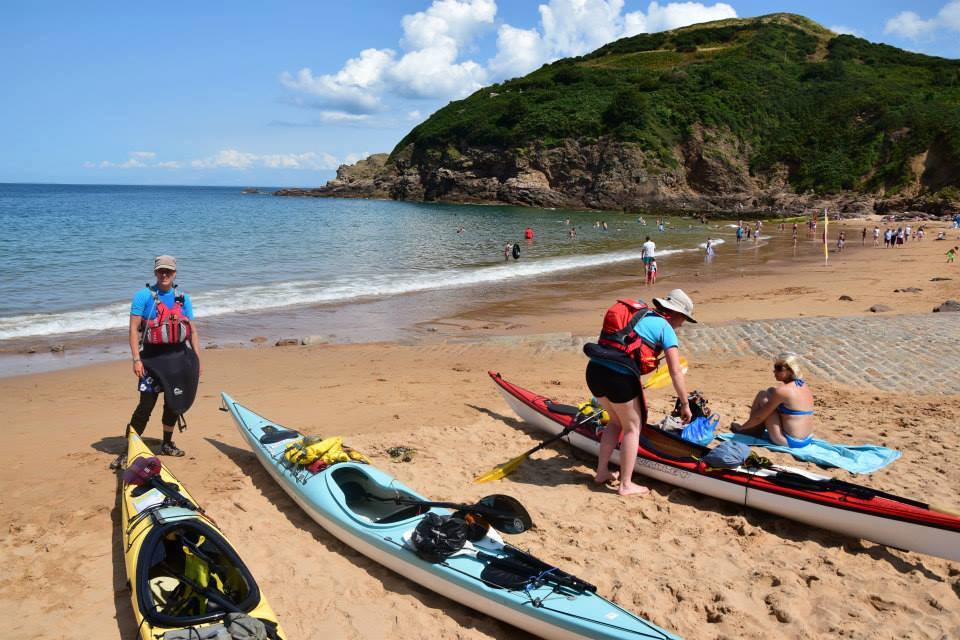 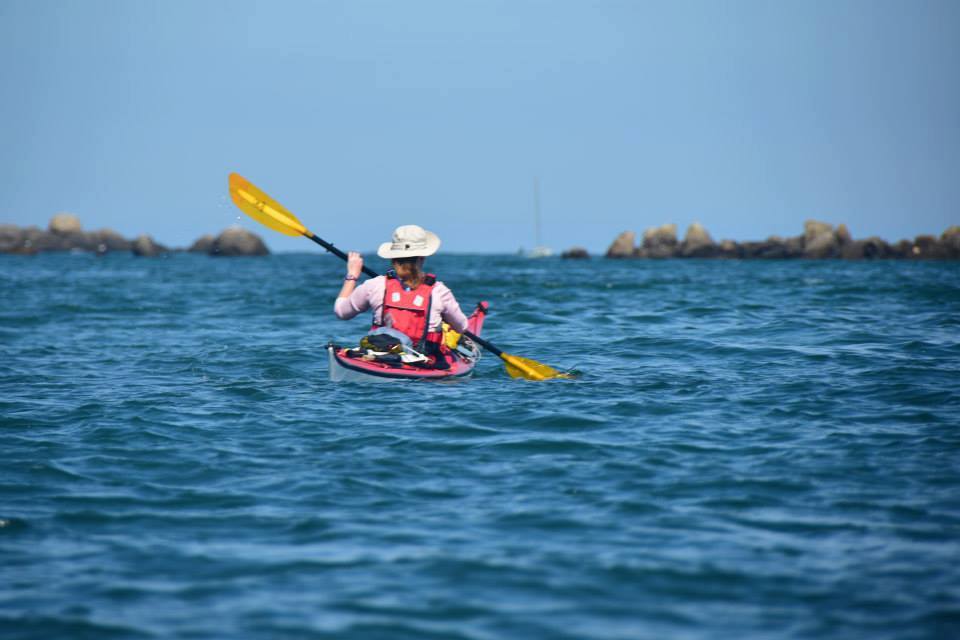 You cross two international borders (i.e. leaving and returning to France) which is officially frowned upon by French authorities; they’re also not keen on offshore sea kayaking. We encountered no problems, no one took the slightest notice of us. See the advice in the guidebook cited below.

The shuttle back to the start after paddling needs a day spare; I walked, hitched, used trains and buses, getting back after nine hours.

Wild camped mostly, used public campsites on Jersey and Alderney). Bivvied on harbour walls and slipways etc. on some occasions. Camping is strictly verboten on the (French) Iles Chausey, we discreetly nipped behind a church and bivvied. 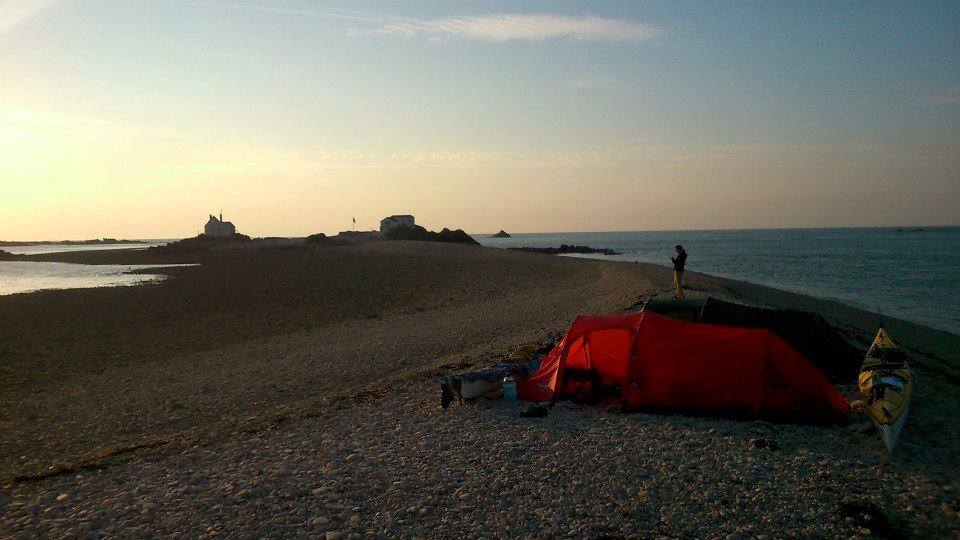 You could take much longer than we did and fully circumnavigate Jersey and Guernsey, recommended if you have the time. There are various (fairly extreme) possibilities to extend this trip by taking in outlying rocks and lighthouses, e.g. Les Roches-Douvres, Casquets if you are so inclined. 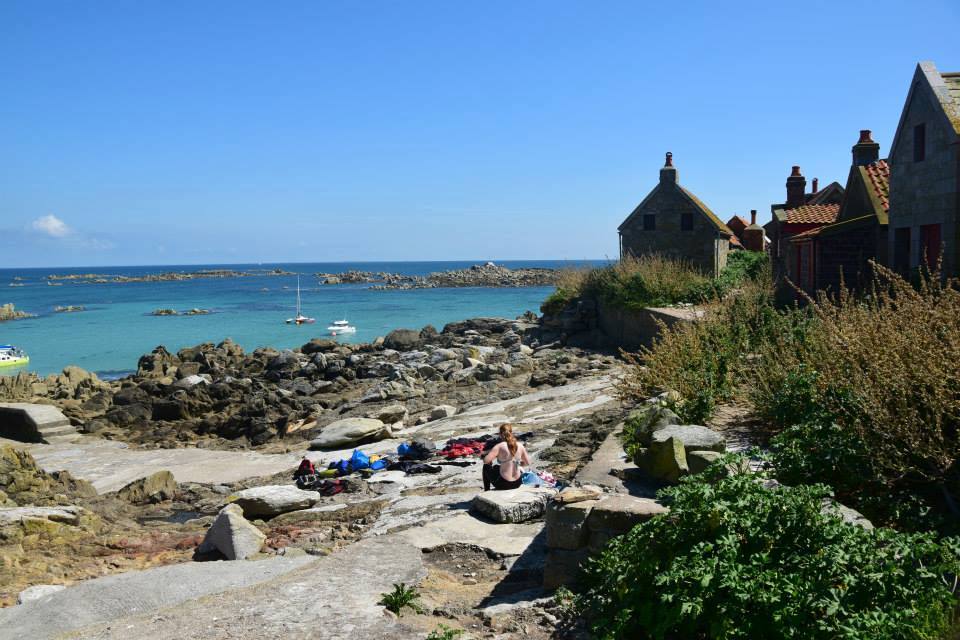 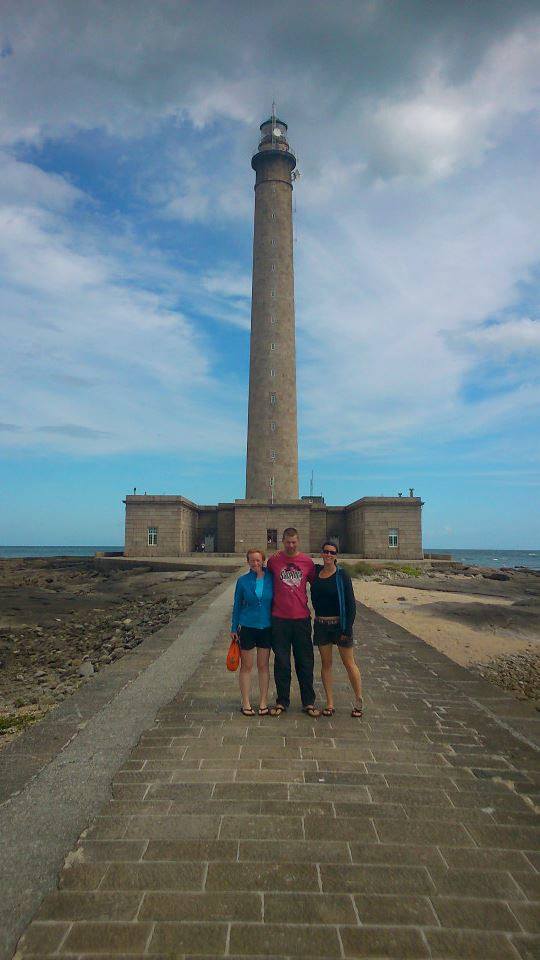 A few of us (myself, Lizzie Garnett, Claire Cailes) just had a crack at visiting all of the Channel Islands, a trip I’ve dreamed of doing for a few years. There are no epic distances involved, but a lot of open crossings of very strong tidal waters (third highest range in the world), and also the complication of starting and finishing in France…in truth, I doubted we’d catch the right weather at the right times to complete this trip, but somehow it all fell together and we joined up all the dots.*

We arrived at Caen by ferry and drove to St Malo, our planned launch point. However there was a strong NW wind…we drove to Granville to see if it was any better there, but it wasn’t. In the evening, we considered a twilight paddle to Mont St Michel. We had just decided it was still too windy, when an epic tidal bore came crashing through…probably a good job we didn’t launch!

We launched early from Granville. hoping to miss the headwinds. We failed, it was a miserable wet, cold and windy flog across to the French Channel Islands, the Iles Chausey. We made it eventually and had an explore around Grand Ile, before bivvying.

Next stop was Les Minquiers, a huge reef which is just a tiny island at high tide. We found ourselves on Grand Ile’s pier at 1 am ready to go…but the wind still hadn’t dropped. We decided that a 14 mile open crossing in total darkness (aiming to hit a moving target smaller than a football field) was enough of a tall order already, without a F4 headwind. We went back to bed. Thankfully the wind had dropped lots by morning, so we were able to cross to Les Minquiers (and British waters), an easy crossing with lots of tidal help.

We awoke on this teeny rock in the midst of the sea, and launched for a crossing to another offshore reef, Les Ecrehous. It was over 20 miles of hot and flat calm tedium before we stepped ashore on this bizarre spot.

We’d bypassed Jersey the day before, and considered it rude not to make amends…we headed SW towards Jersey, but the tide wasn’t having any of it. We were pushed west along the edge of the Les Ecrehous reef, and also made an unplanned visit to the Diroulles reef. At one point we were getting further from Jersey rather than closer! This was however tremendous fun, involving ferrying across lots of little tide races. We eventually paddled directly south, and flogged our way to Jersey…by the time we hit land, we’d missed half of the north coast! The remainder was great, huge caves and lots of exploring to be done. We arrived at Greve du Lecq and taxi-ed to a ‘proper’ campsite, knowing that the conditions would not be good to continue tomorrow.

Force 4 and 5 winds made the crossing to Sark look unappealing, plus Lizzie was feeling a bit sick. The girls did tourism on Jersey, whilst I took a ferry to Guernsey to see my wife and daughter, who happened to be on holiday there.

I arrived back on Jersey off the ferry from Guernsey and took a taxi direct to the beach where I met the other two, had my boat loaded in minutes…and we were off on the Jersey-Sark crossing, right on schedule as planned. This was about 14 miles(?) without any expected tidal help. As it happened, the tide did help a fair bit, and we arrived fresh enough for a paddle around Sark…a fantastic bit of coast. We bivvied on the pier in Sark’s harbour.

We did tourism on Sark in the morning. We then considered crossing to Guernsey and taking in the south and west coasts of that island…as it happened, some lively seas and crazy tide races around Sark meant that we were happy just to arrive at nearby Herm intact. I was all for going on, but the girls mutinied and wanted to camp on/ explore Herm, so we bivvied…

…and they were 100% correct, this island was just lovely and well worth a day of our time. In the afternoon we made the short paddle across to Guernsey. This will *never* be forgotten; although we had all been keeping careful watch, in the midst of ferrying across a tide race, I looked over my shoulder and saw all 5000 tonnes of the Condor Vitesse Seacat ferry bearing directly down on us at 35 knots, less than two minutes’ away. A truly terrifying sight. Where the **** did it come from? We still think it must have beamed in. I had the chart to hand, and quickly realised that it was going to have to veer past us; we were in shallow water. The girls did not know this however, and more or less freaked…they were still shaking hours later.

After a camp on Guernsey’s northern tip, we had decisions to make. The forecast was for generally deteriorating weather in our remaining days, and we still had the biggest crossing (to Alderney) and the most serious crossing (to France, across the Alderney Race) left. We reckoned we could cross to Alderney that afternoon, but get no further. We actually came up with a plan involving shipping our kayaks home from Alderney (the Alderney Shipping Company offices couldn’t have been more helpful) and me flying to Guernsey before taking a ferry to France to retrieve the car, with the girls possibly hitching home on a cross-channel yacht; basically, getting away from Alderney would be a major PITA, but we were determined to paddle there! In the afternoon, our crossing to Alderney was in utterly perfect conditions (forecast had suggested that we’d be grinding into a headwind) and we explored that amazing island’s southern cliffs before landing after c25 miles on the water. The forecast now changed, suggesting that there might just be one small window to get to France, early the next morning…

…and as the day dawned, it was clear that the settled patch had held out for us just a little longer; we were paddling to France, after all! The gap between Alderney and Cap de La Hague is about ten miles, with some of the world’s strongest tidal flows squeezing through it. We needed – and got – utterly calm conditions, to paddle across. It was almost too easy, at first…but the final hour was a tough paddle across alarmingly accelerating flows into the shelter of tiny Goury Harbour. Landing, we couldn’t believe we’d just safely reached and touched down upon what our Pilot book described as, ‘possibly the most stream-lashed headland in the world’. Yay us. In the afternoon, I hitched/ bussed/ trained back to the car (a nine hour round trip) whilst the girls hid from torrential rain in a tent in the car park and drank all the leftover wine! At one point they looked out to sea and could see nothing but white. We timed our crossing well. We then drove around to find an official campsite, found one, camped, got thrown out by a bouncer (really) and ended up wild camping on the coast instead.

tourism and the ferry home…

*Except for the extremely remote Casquets Lighthouse, which evaded me for a second time…grrr, I will return… 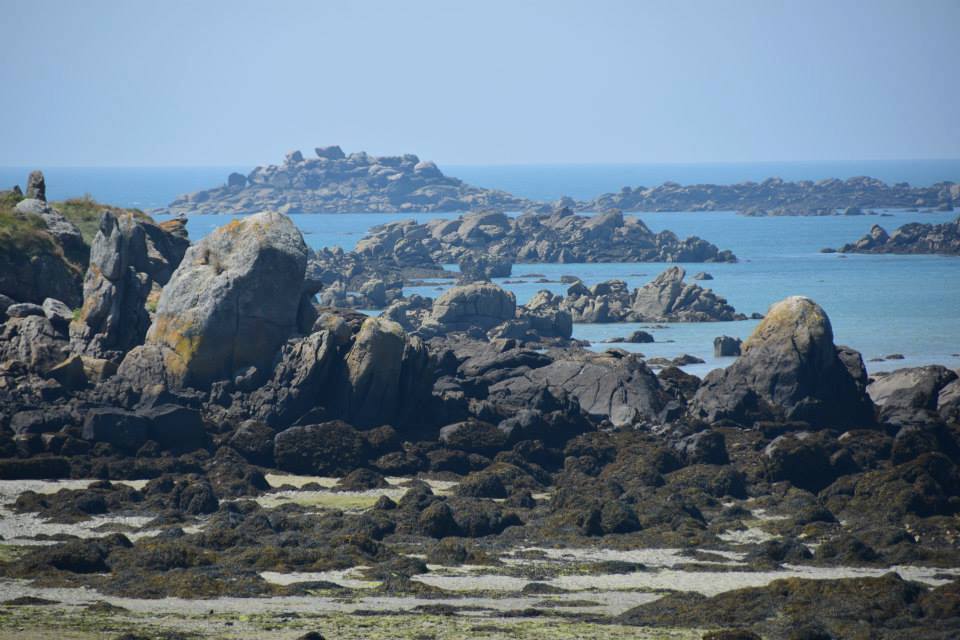