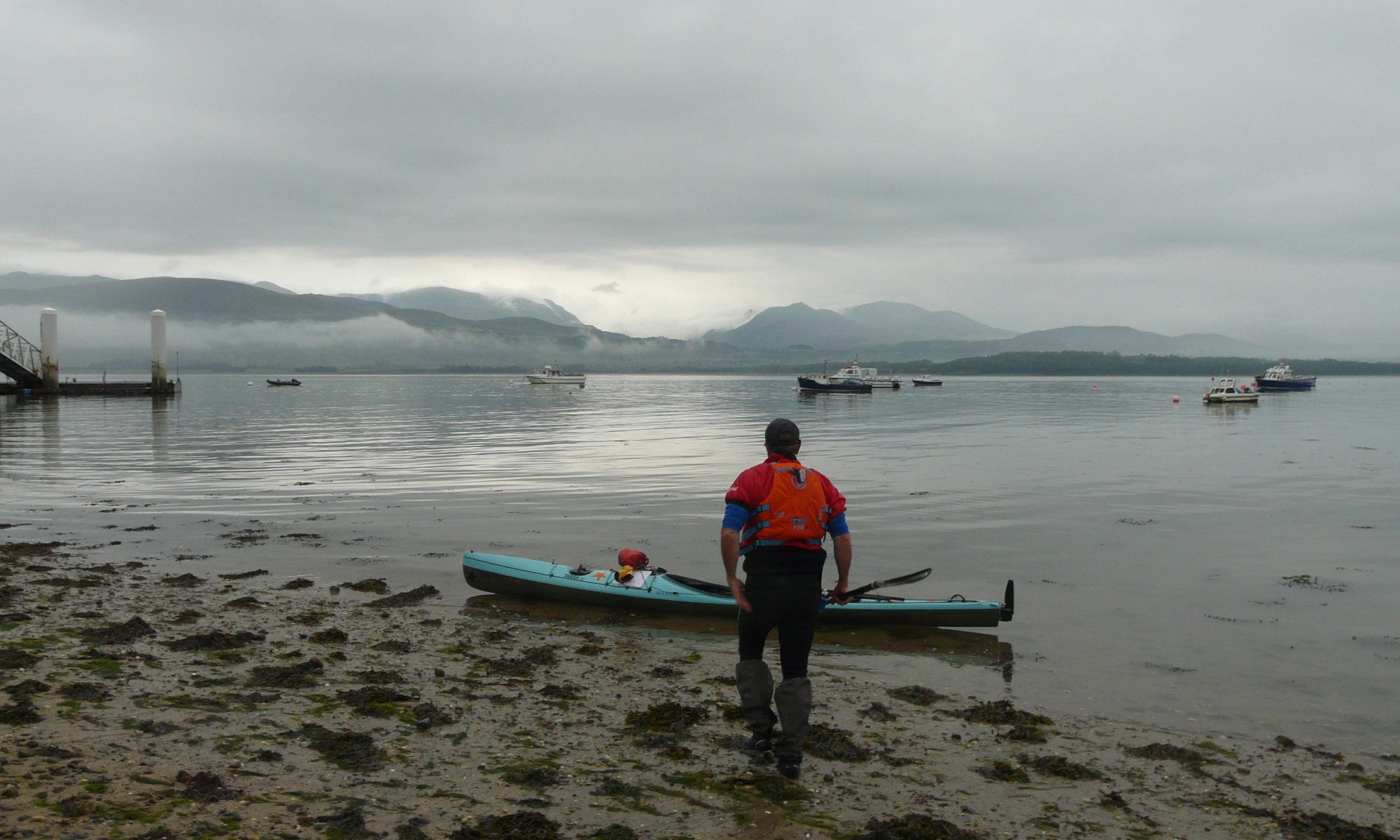 I like the whole Performance Sea Kayaking lark. You may have noticed.

It encompasses such a wide range of paddling – Circumnavs, Crossings, Multi-Day Expeds, Challenge Paddles and so on. It doesn’t really matter what you do or how you do it – just stay safe and push your own limits.
That covers it for me.

And paradoxically 2020 is turning out to be quite good for the whole PSK paddling cause – Jon Needam around the IOW,  along with Michal Madera, Jonny Eldridge and Dan McGonigle crossing the Irish Sea (overnight), Mark Rainsley close to a finish on his UK Circumnav, Ian Cooke around Bute, Jack Gatacre paddling a chunk of Scotland and of course endless jostling within the ranks of the Distance Challenge and the Time Trials – all since the end of lockdown. I feel tired just writing about it.

So of course, it was my turn to suffer a bit. Time to do another Anglesey Circumnav me-thinks.

My PSK ball started rolling with an attempt on the Anglesey Circumnav record 15 years ago. I’ve done a fair few more circumnavs since then, but this one still holds a fondness. Which is a little surprising, because to be honest it is a bit of a bastard . Anglesey is one of the ones that demands that little bit more somehow.

Getting around in a ‘one-er’ isn’t too difficult. Yes it is a long way, but keep on pulling and you’ll get there eventually.
However to do it fast is different. The paddling is uncomfortable but it almost becomes a formality. The plan however requires a whole new level of detail. It is the plan that makes or breaks a fast time. It’s simple – know your tides, or go home.

And that’s where the slight stumbling block appears for me. I’ve been around   more heading towards 10 times and I’ve wrung about as much out of my Ang Circ Plan as I can. There’s not much more to squeeze out. Newton, Gravitational Attraction  and flow win in the end – hand’s down. And it is a long way to paddle to just be ’30 mins down this time’.

You have to put up with all the same old crap that goes with that: ‘too old’, ‘only because of a fast boat’, ‘only local knowledge’, ‘the wings made the difference’ and all the rest of that bollocks. To be frank I’m rather tired of hearing all that.

Even so, the challenge still has that draw, it’s an old friend after all.

So this time we wanted a new angle. Time to paddle around  ‘backwards’. I’d looked at going around ‘in-reverse’ for a while, but never really managed to get the plan to work. Then I was told it couldn’t be done – that meant ‘game on’ for me.

Mike Webb from Rockpool Kayaks produced a new boat to go with the new direction, a shiny Taran 16. A very nice boat, but admittedly not my first choice for this job  – my ‘records’ boat is a Taran 18 of course. It’s nothing personal against the T16, but it is a little ‘stumpy’ isn’t it? However I did want to see how it fairs on a long-paddle;  and hey it all sort of fits – time for an ‘anti-record’.

A bit of tedious weather arrives to complete the picture – in comes the low pressure to blot out the ‘big springs’ of circumnav-convention.

And so, even after all these years, I find myself with a slightly new challenge – going the wrong way around, using a ‘short’ boat, on neap tides, with a wind and even a crappy tidal start to match the daylight. But no excuses here, I make the choice, no-one forces me to do it.

So: Start and finish at Beaumaris, paddle out and go left instead of right Fatboy. 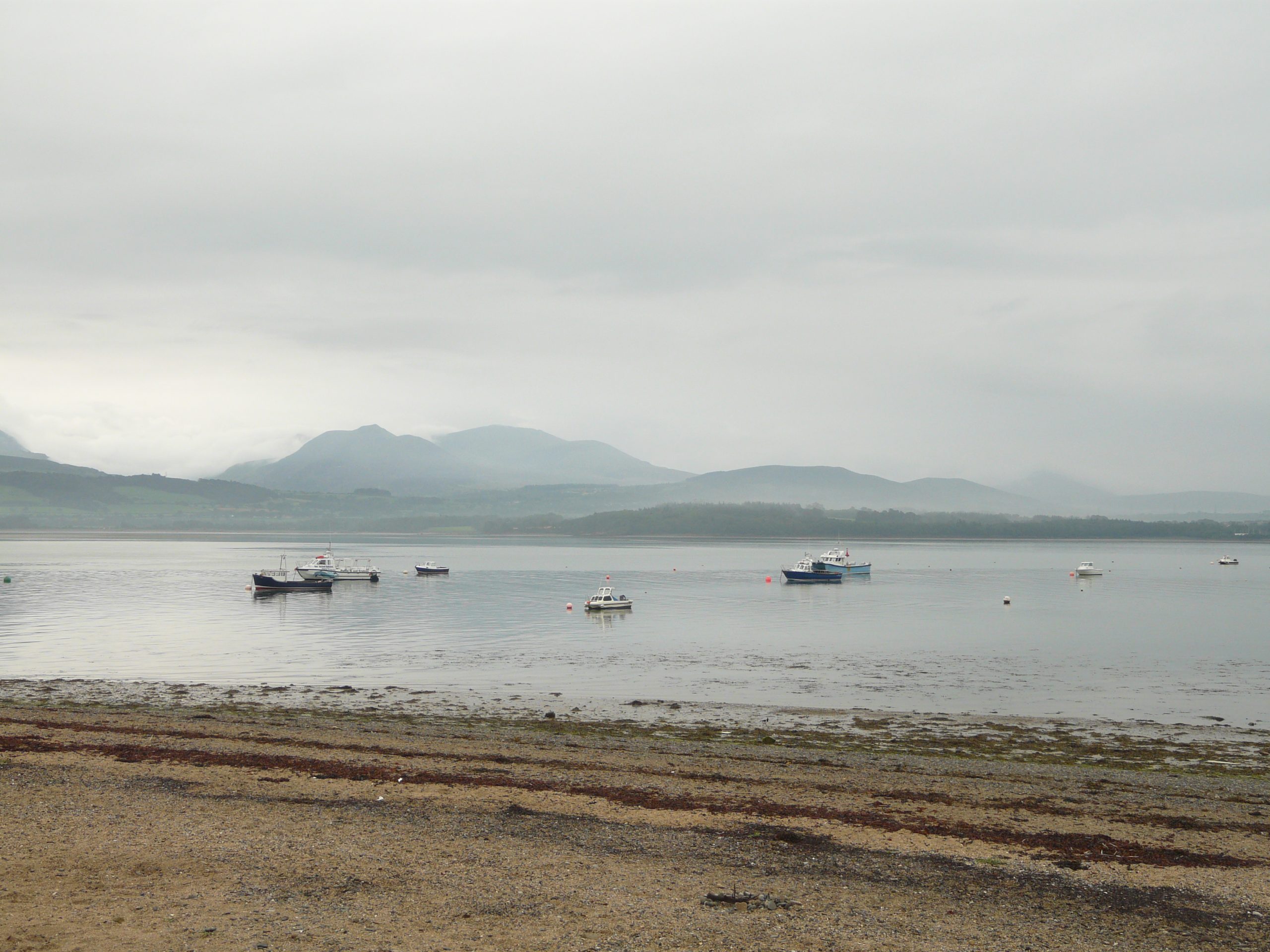 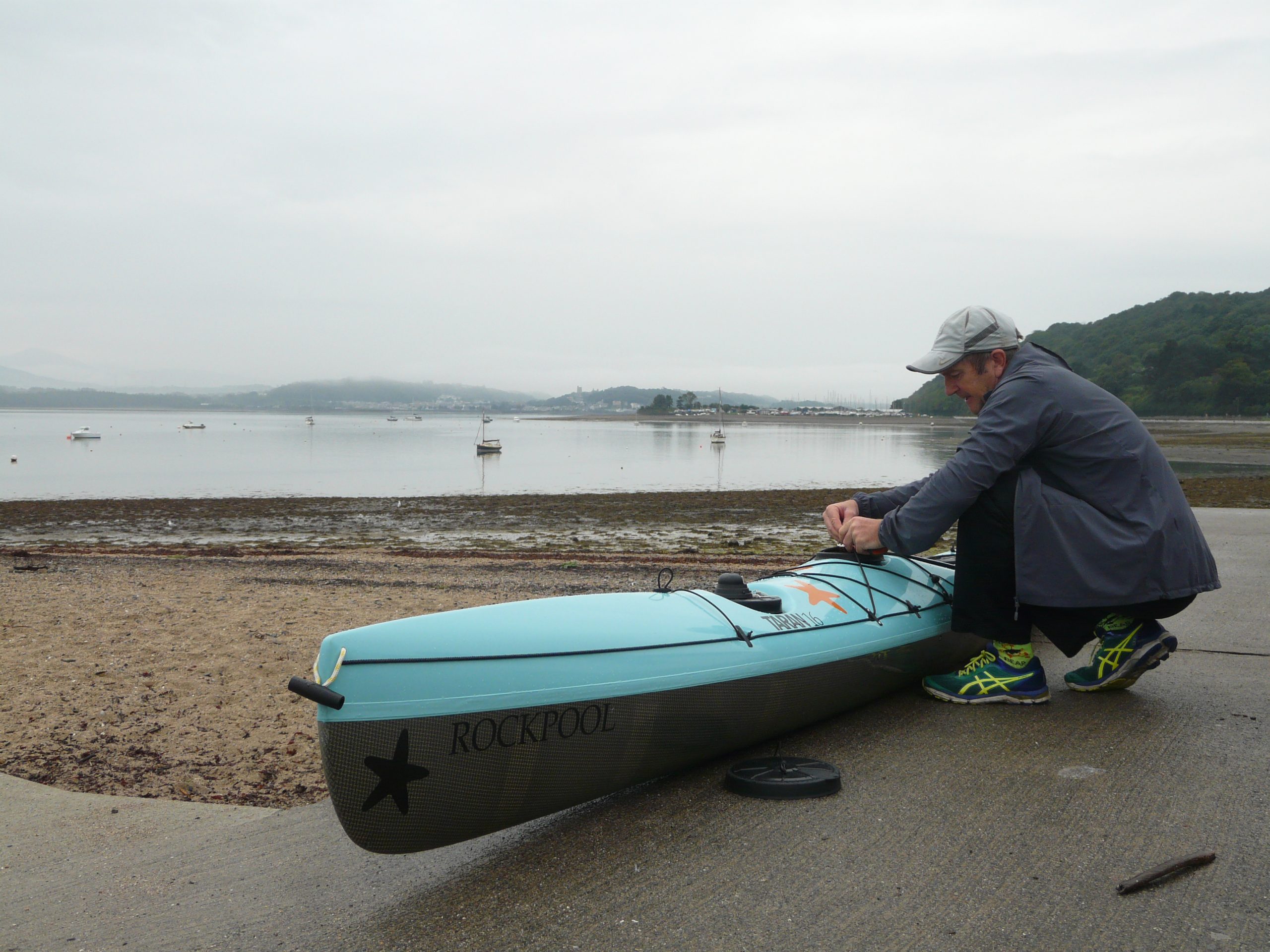 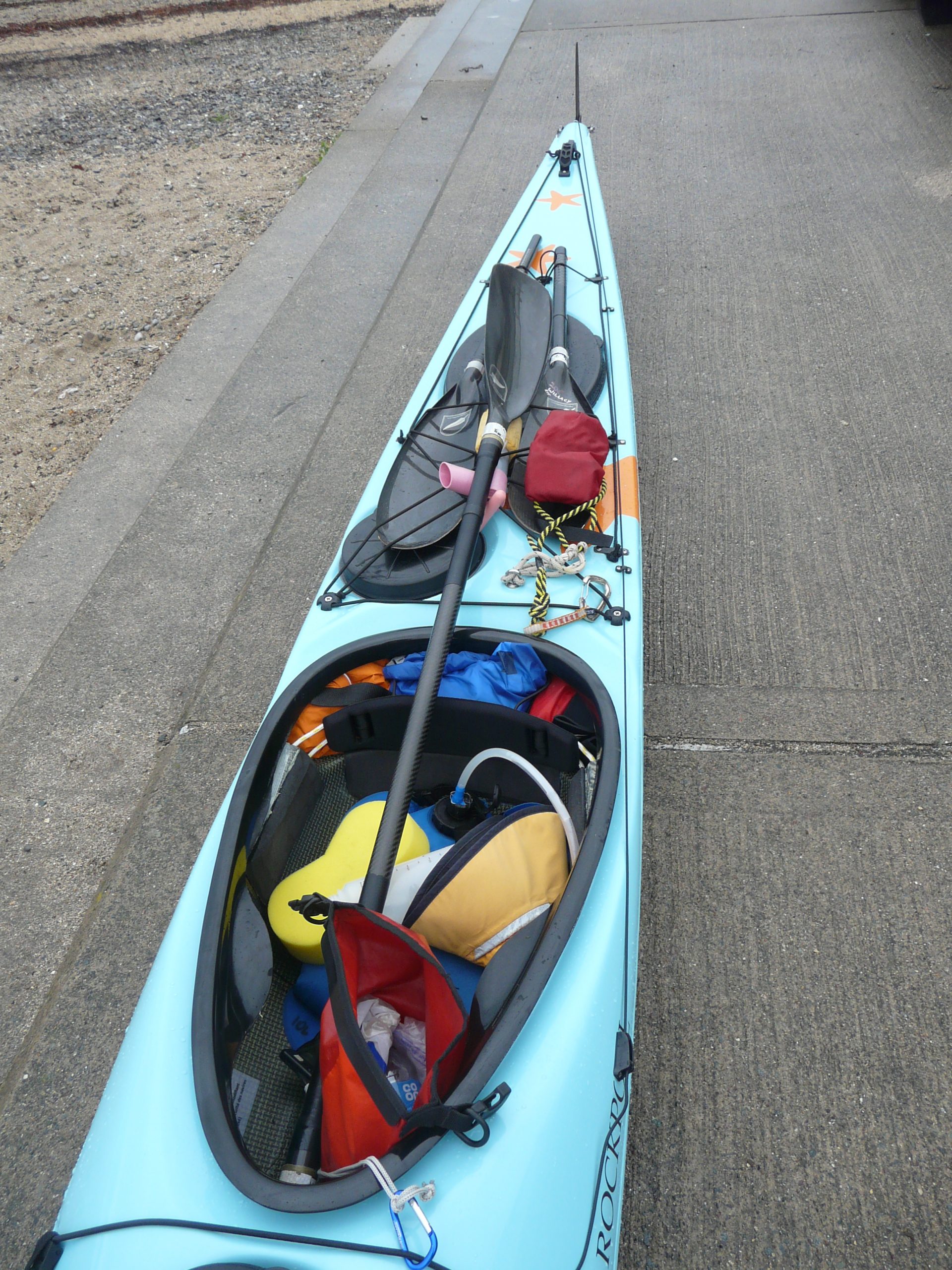 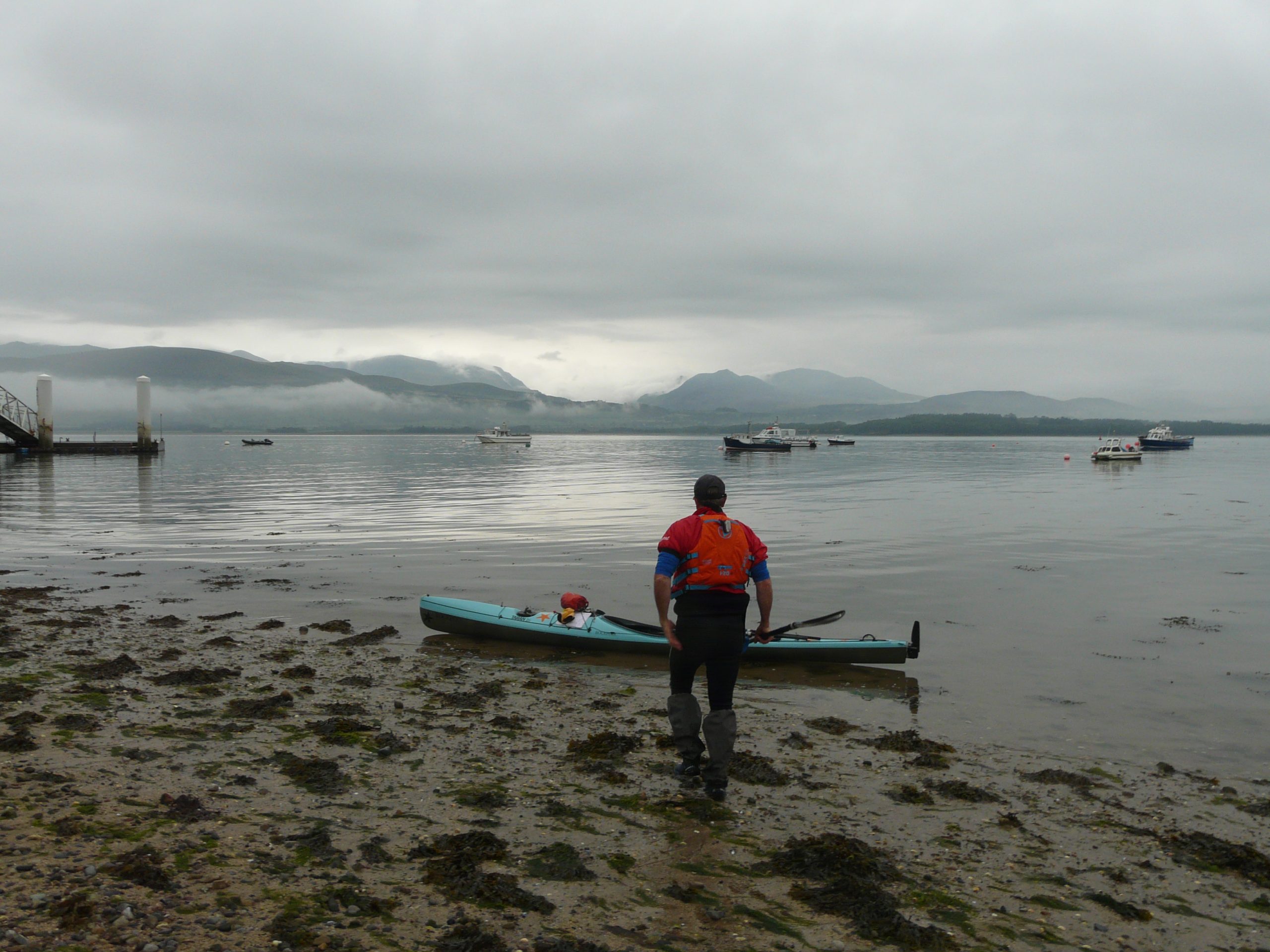 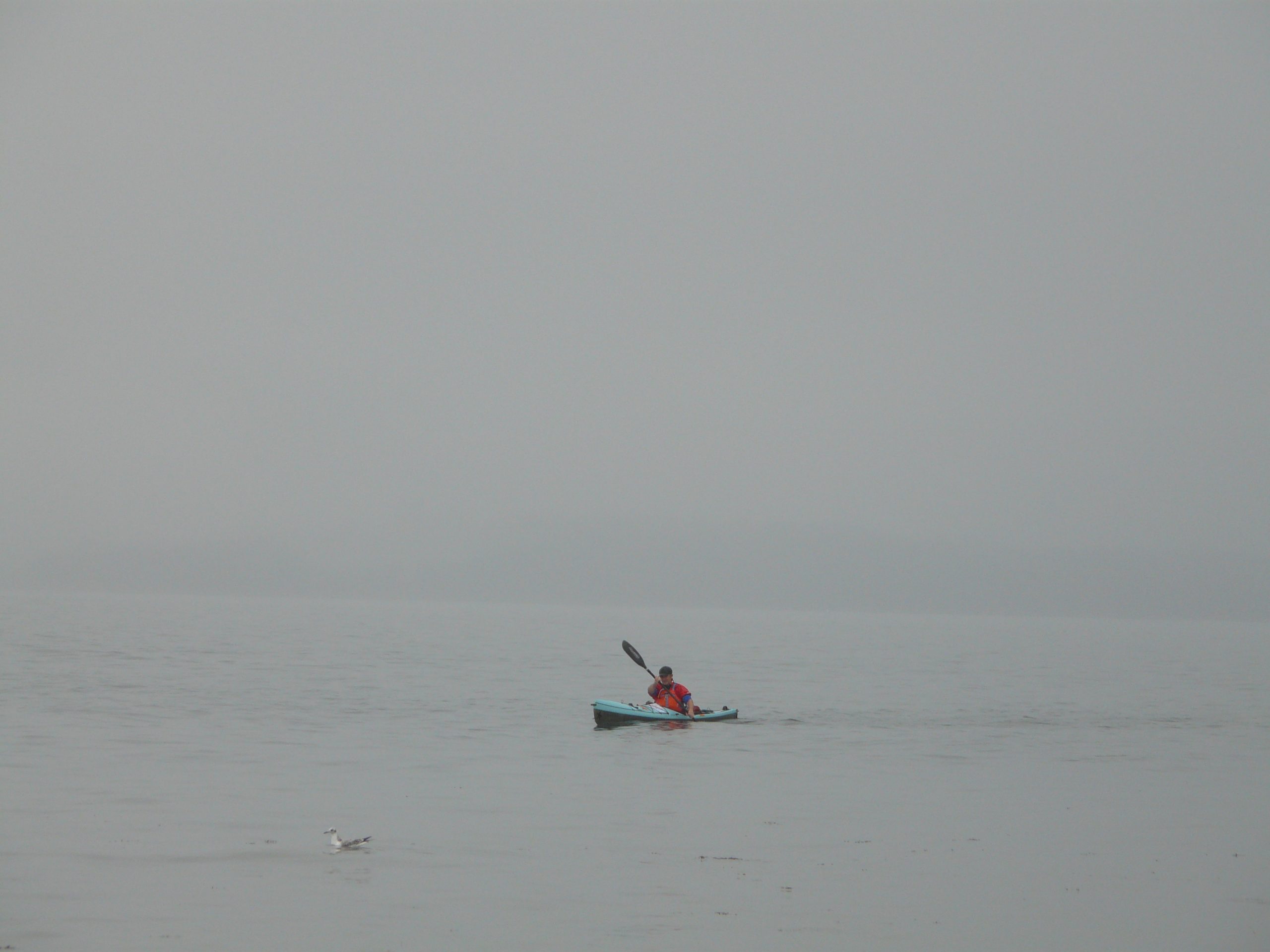 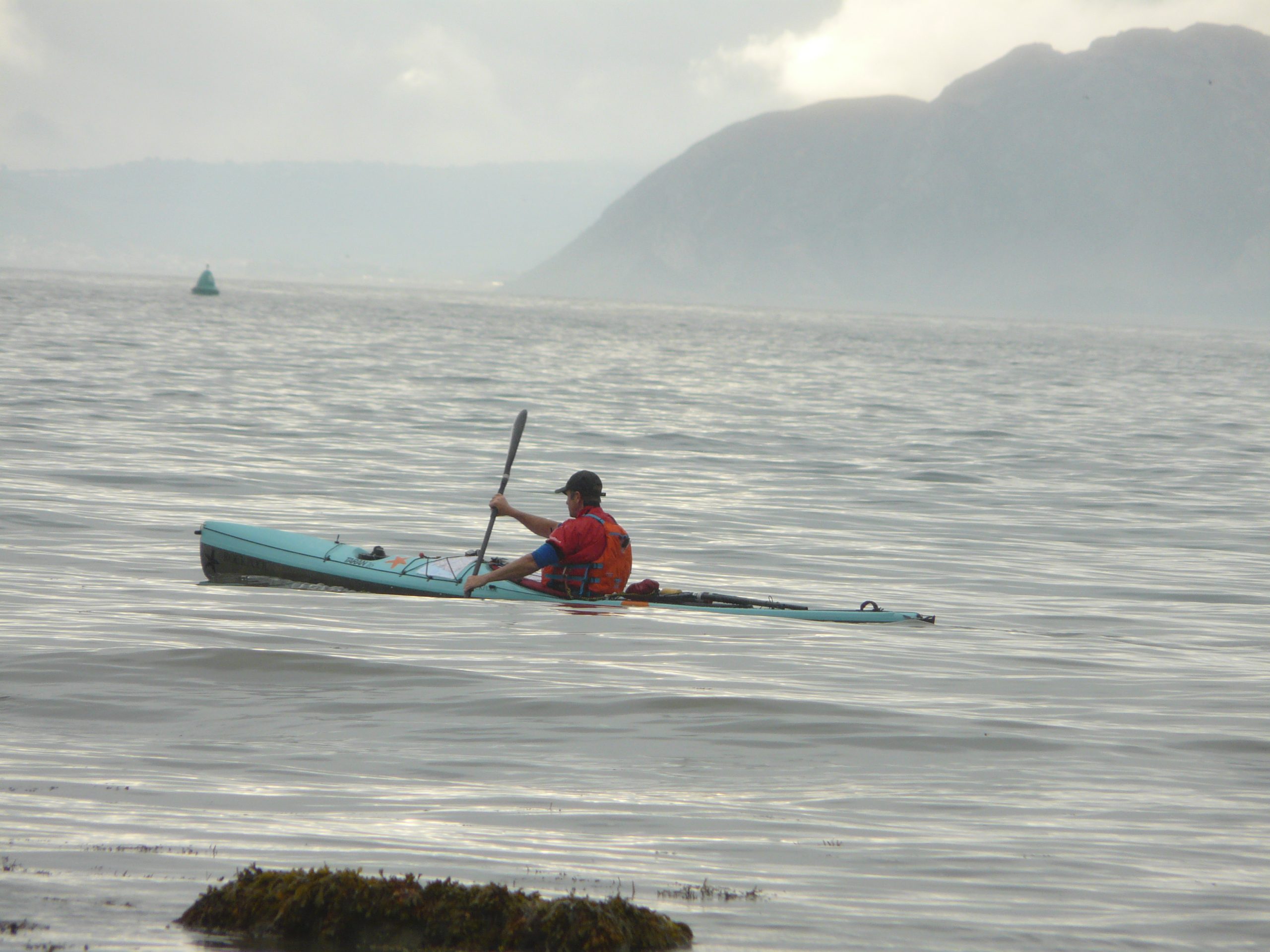 I expect a bit of a slog to Puffin, but it’s so familiar here that life glides by in a not-yet-awake daze. 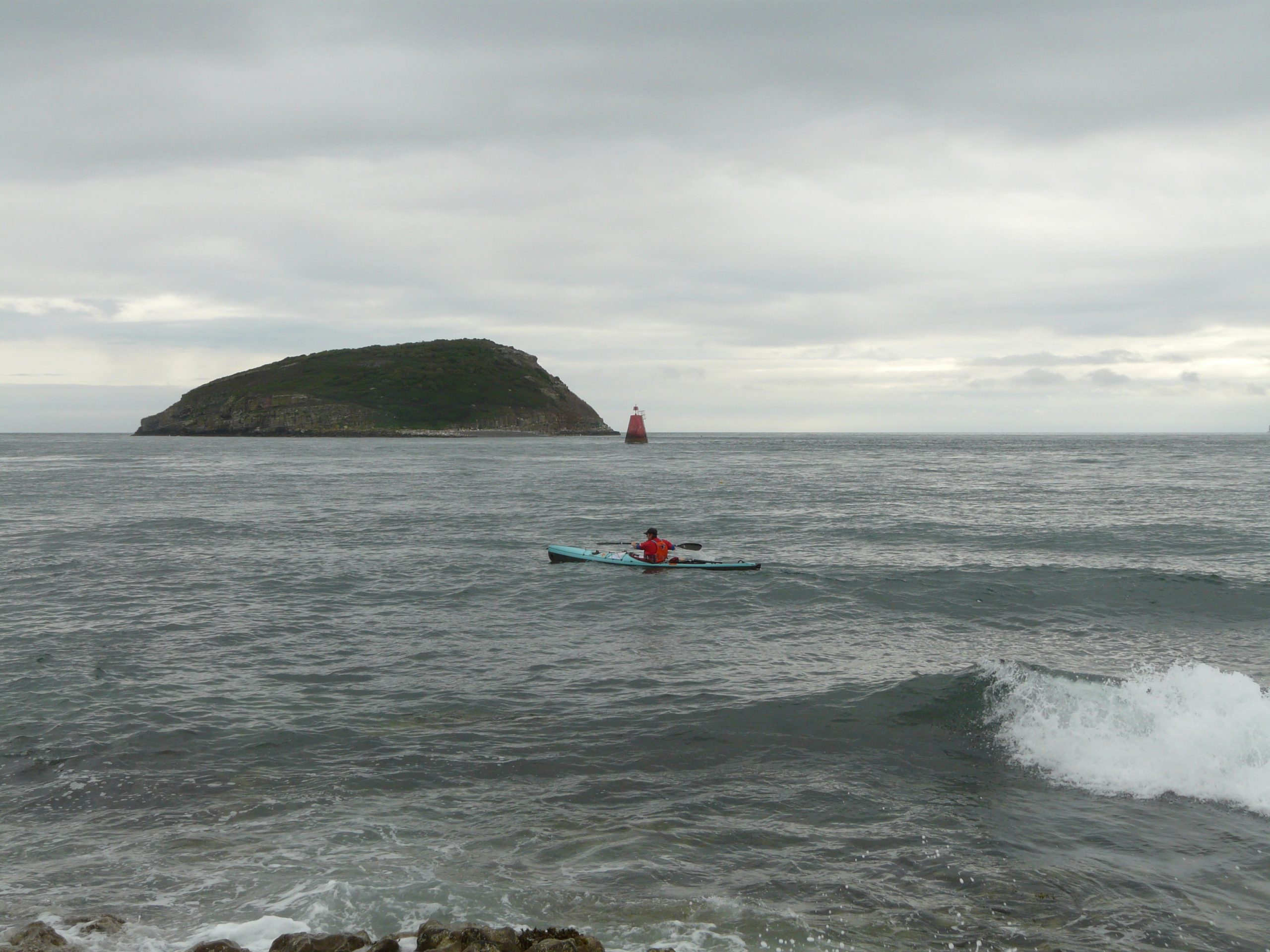 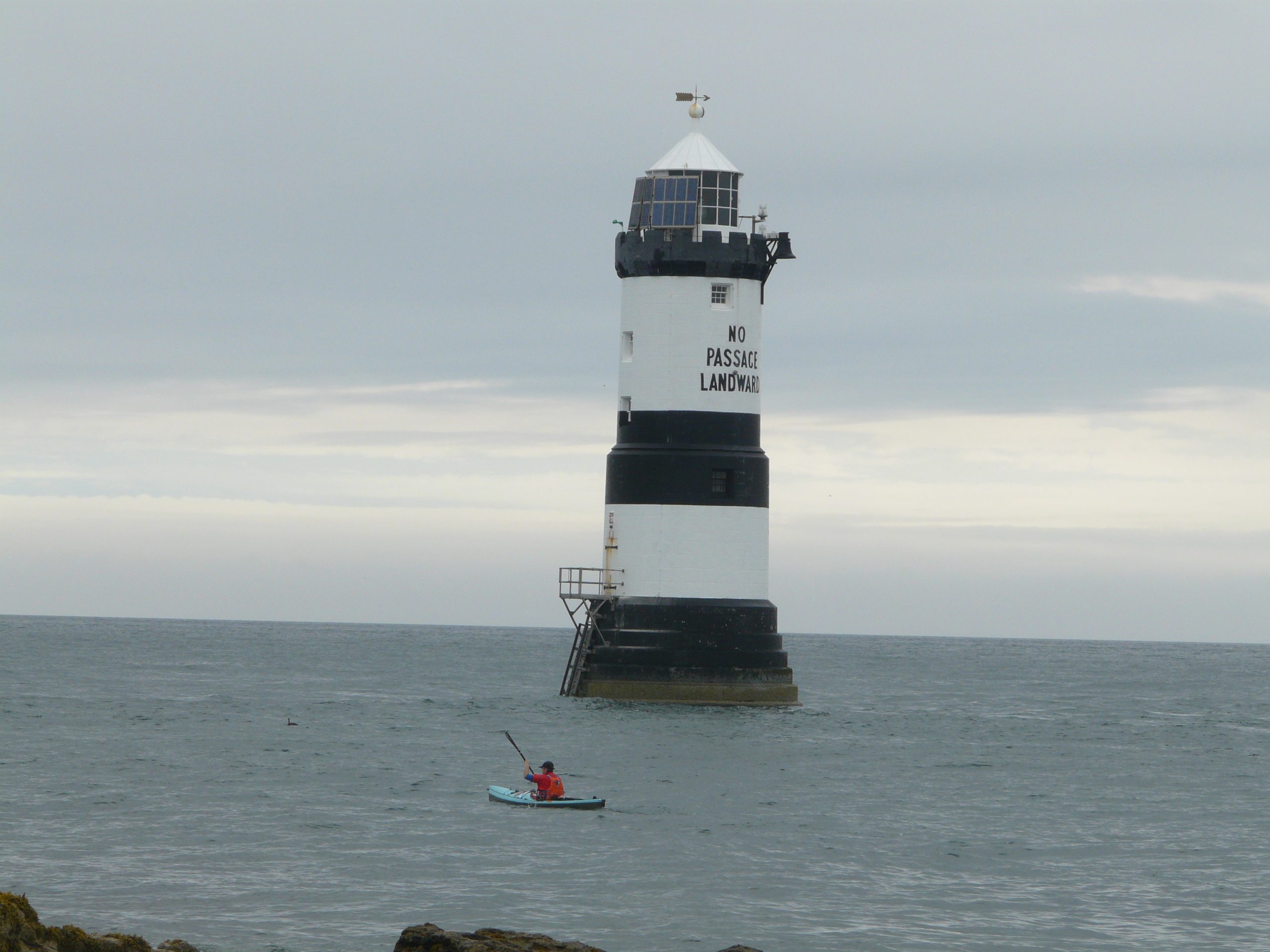 On the usual CW Ang Circ route, the Point Lynas to Puffin is the slog section, and funny old thing, it still is ‘in-reverse’. But the low drizzle and mist hide my progress for so long that Point Lynas arrives sudddenly out of the damp gloom. I catch the remnants of the super-large eddy and slide into the race on the corner.

My stalker – The Mad Lass is still there on the cliffs (been doing it for years, somehow she appears on the cliffs on all these adventures), this time shie is waving a pink can-you-see-me-now brolly.

The tide race at the end provides a welcome change from the slog and the little T16 bursts into life, after our sulky progress along the E coast. 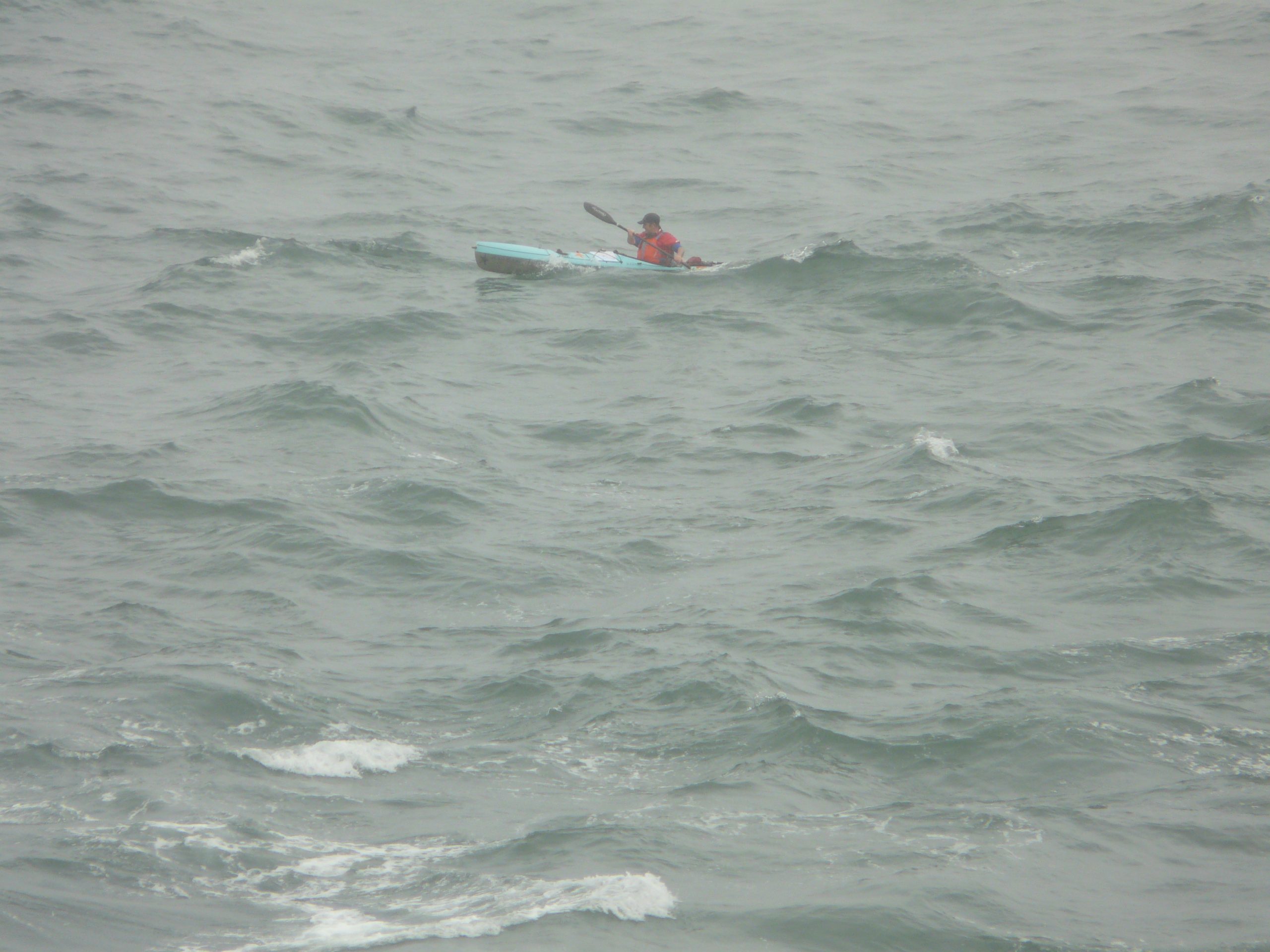 On the familiar CW Ang Circ route the water along the North Coast always seems to have too much energy in it. On even the calmest days the boils and chop quarrel in a directionless morass. You can’t work out if they hinder your progress or not as the coast slides rapidly by.
I’m interested to see how it goes backwards. Not much different it seems. The T16 is not bothered though, we make a good no-stress progress through the rain.

Holyhead Bay is a little more stressful. We shoot out of the ‘Carmel Gap’ like a cork out of a bottle, straight into a misty crossing once again. Our hidden target of North Stack takes us across the compressed ferry routes in and out of Holyhead Harbour. We’ve got a few mins of grace, so as long as they don’t set off early it should work. Always a little nerve-wracking all the same – don’t want to be in the way of the ‘Ulysses’ as it does a ‘left-hand-down’ around the tip of the Breakwater. 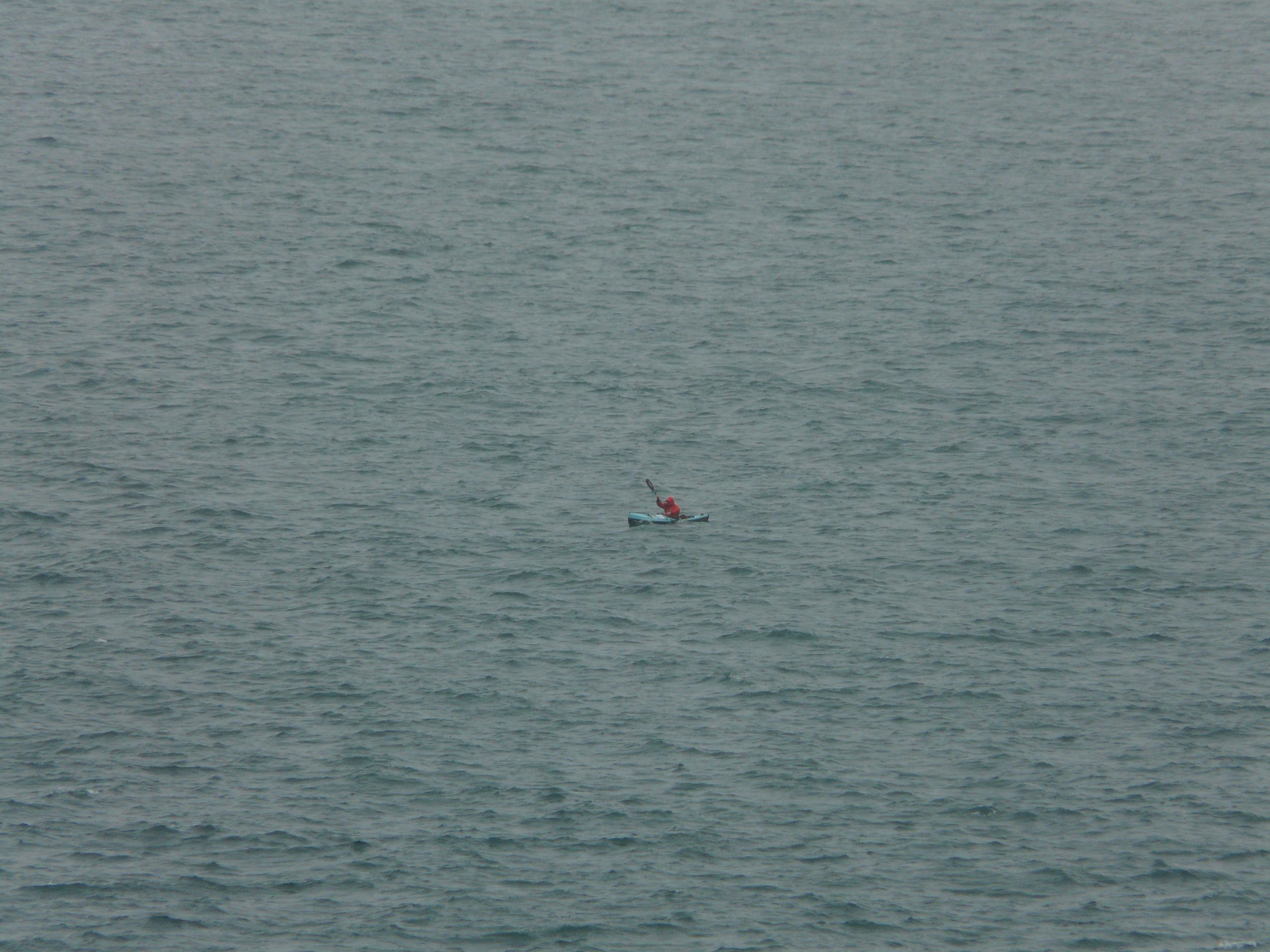 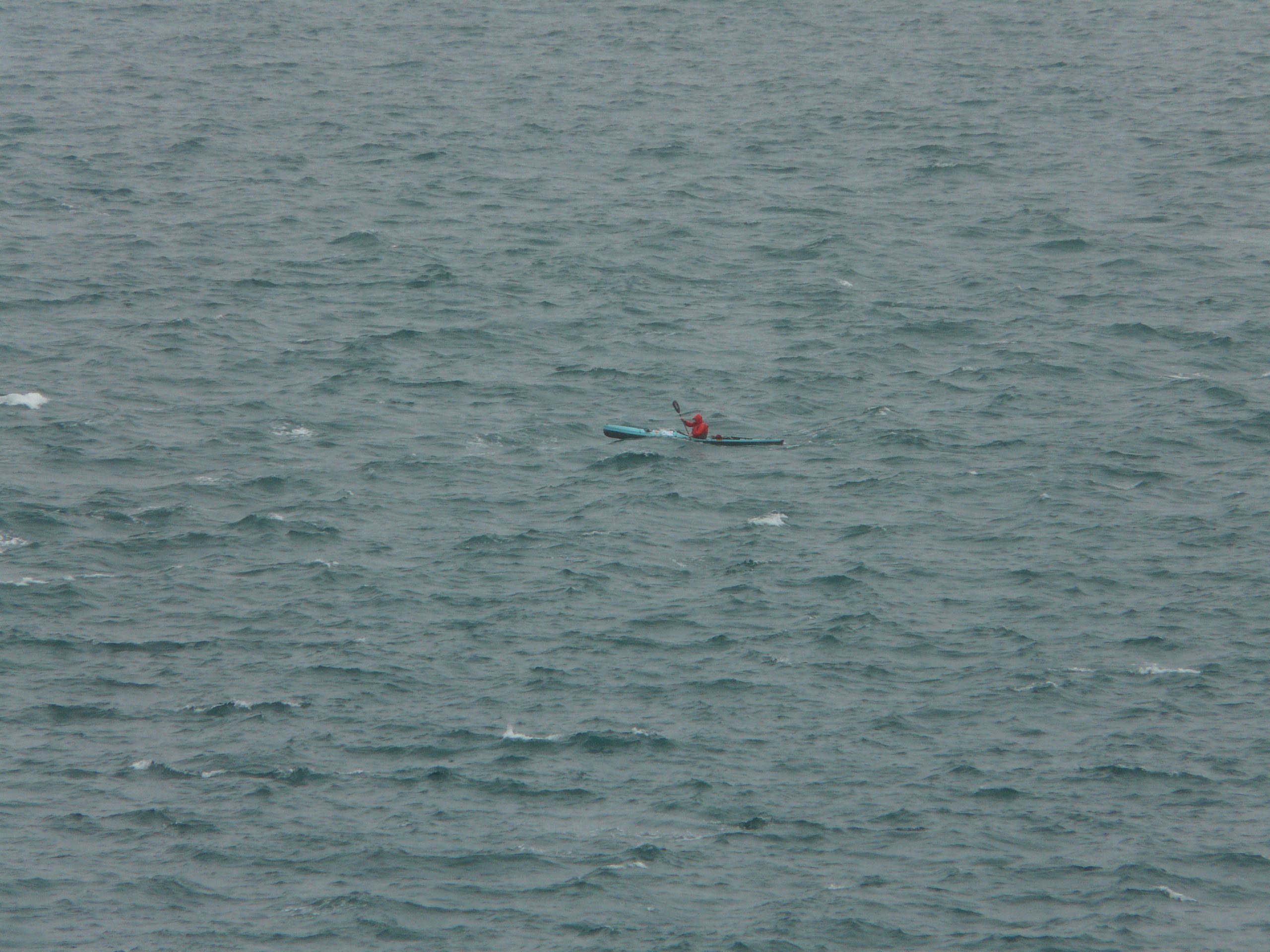 The fading North Stack Race shoots by, as my stalker looms out of the mist by the old coastguard station once again, and then the distant South Stack is suddenly here – punctuated with the droning of the fog signal. The little T16 smiles it’s way through the standing waves of South Stack and I turn south – we are getting there.

Except of course soon we are not. The eddy along here is hard to avoid (unless I want to scrape barnacles at Dun Laoghaire). It wins, it’s far bigger than me. There’s a wind too of course, but so what? Get on with it or get off Fatboy.

It’s a long slog now, and we both sulk, the fun is over. Dues are to be paid. 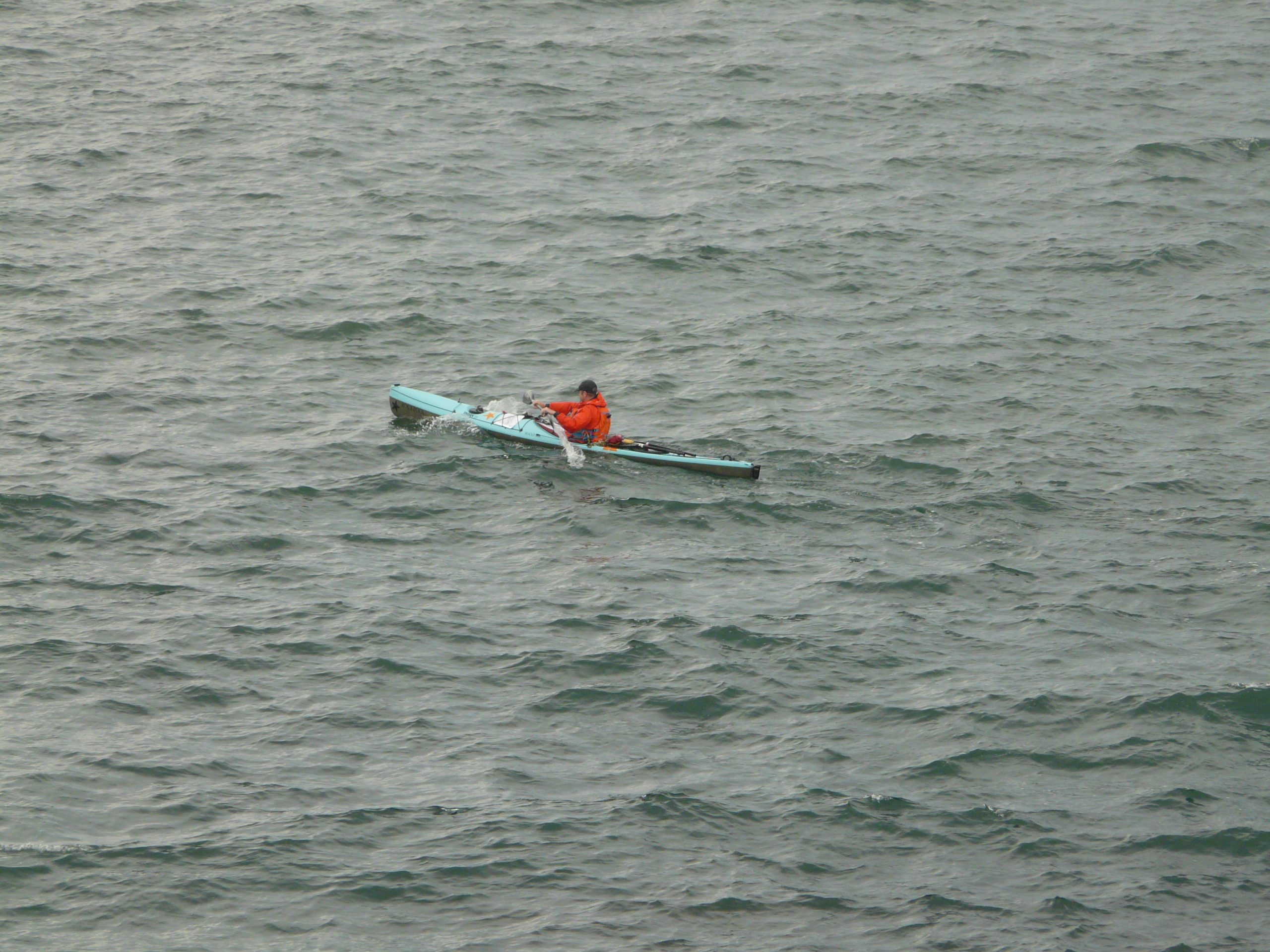 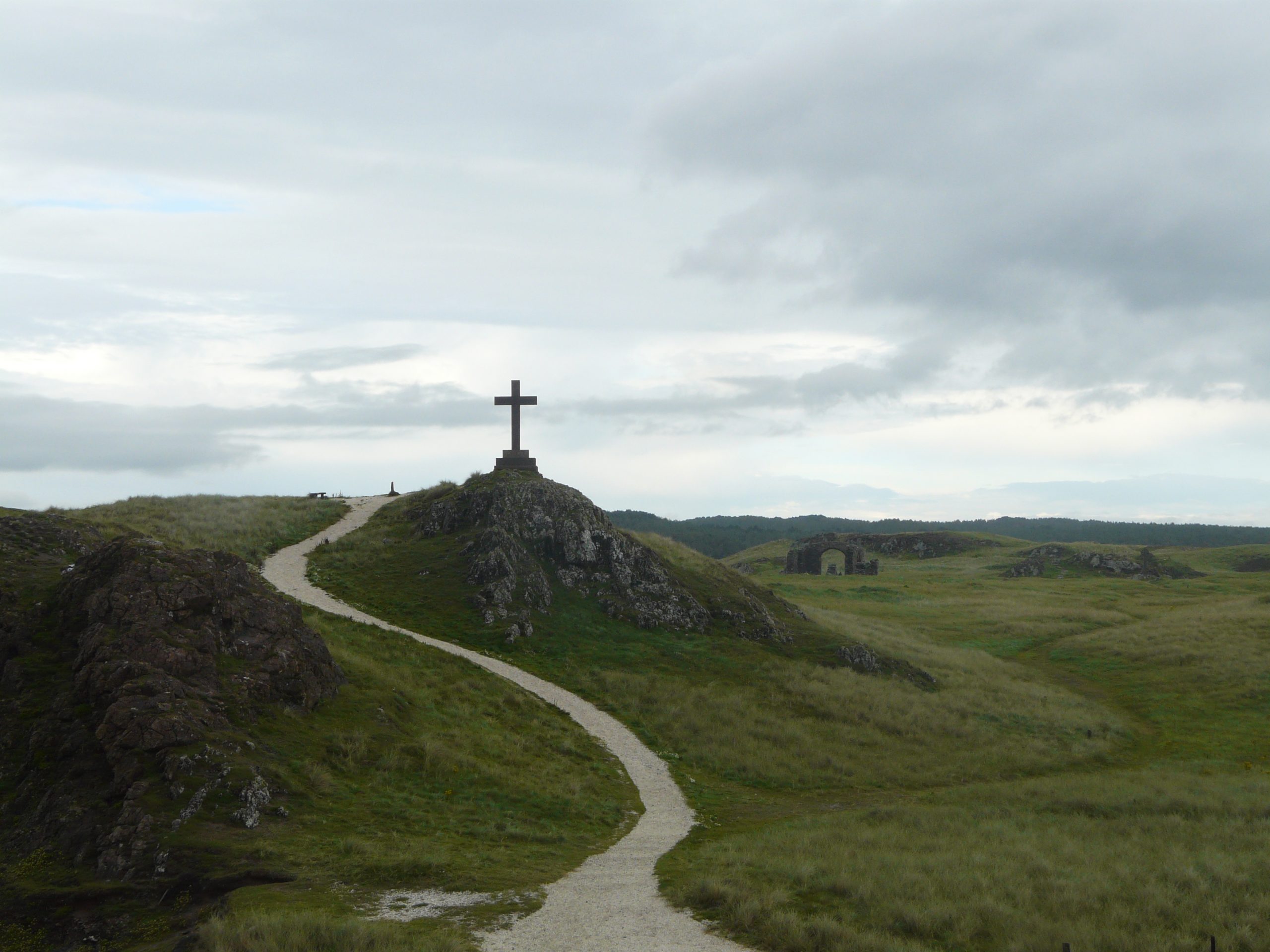 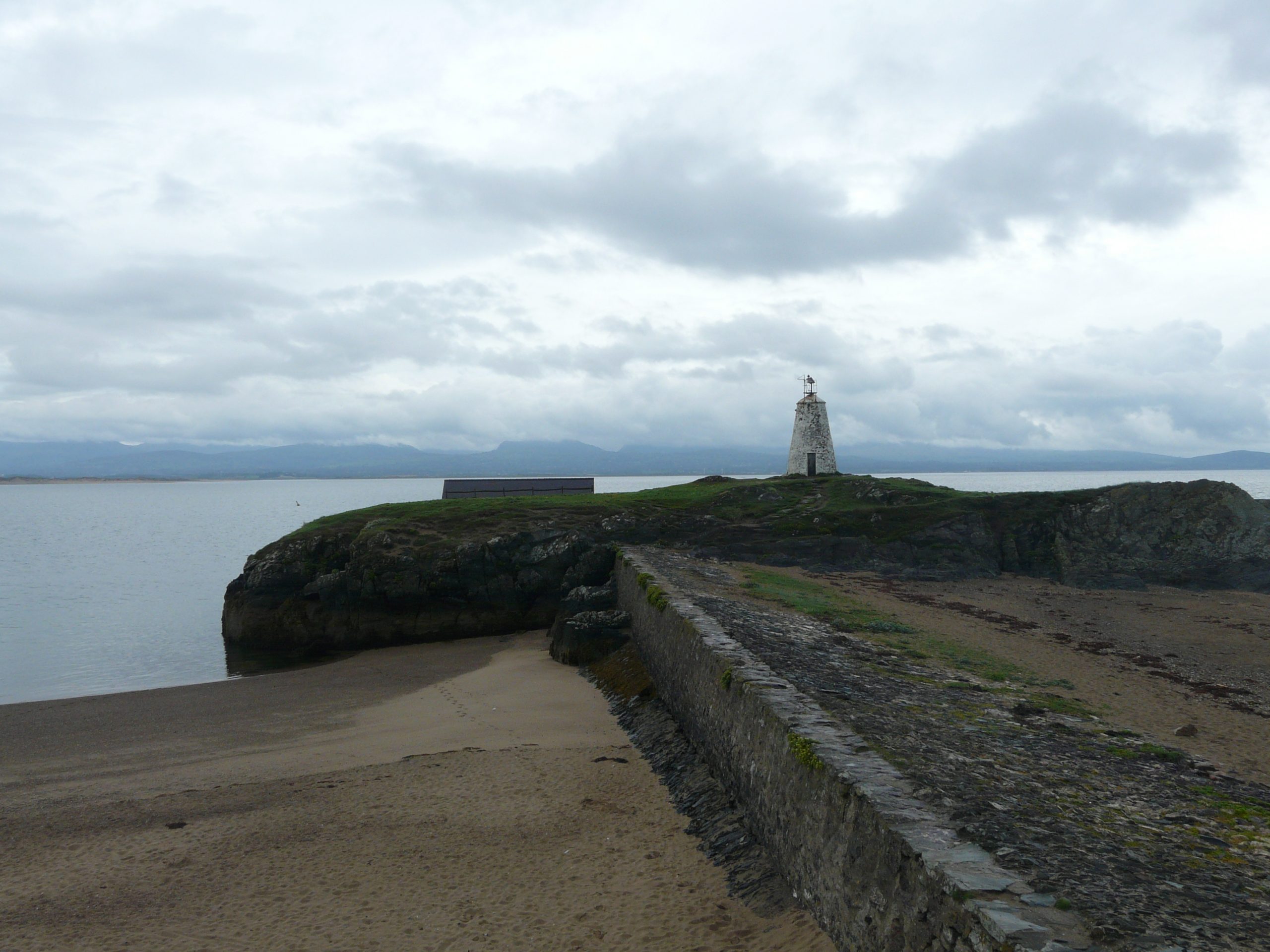 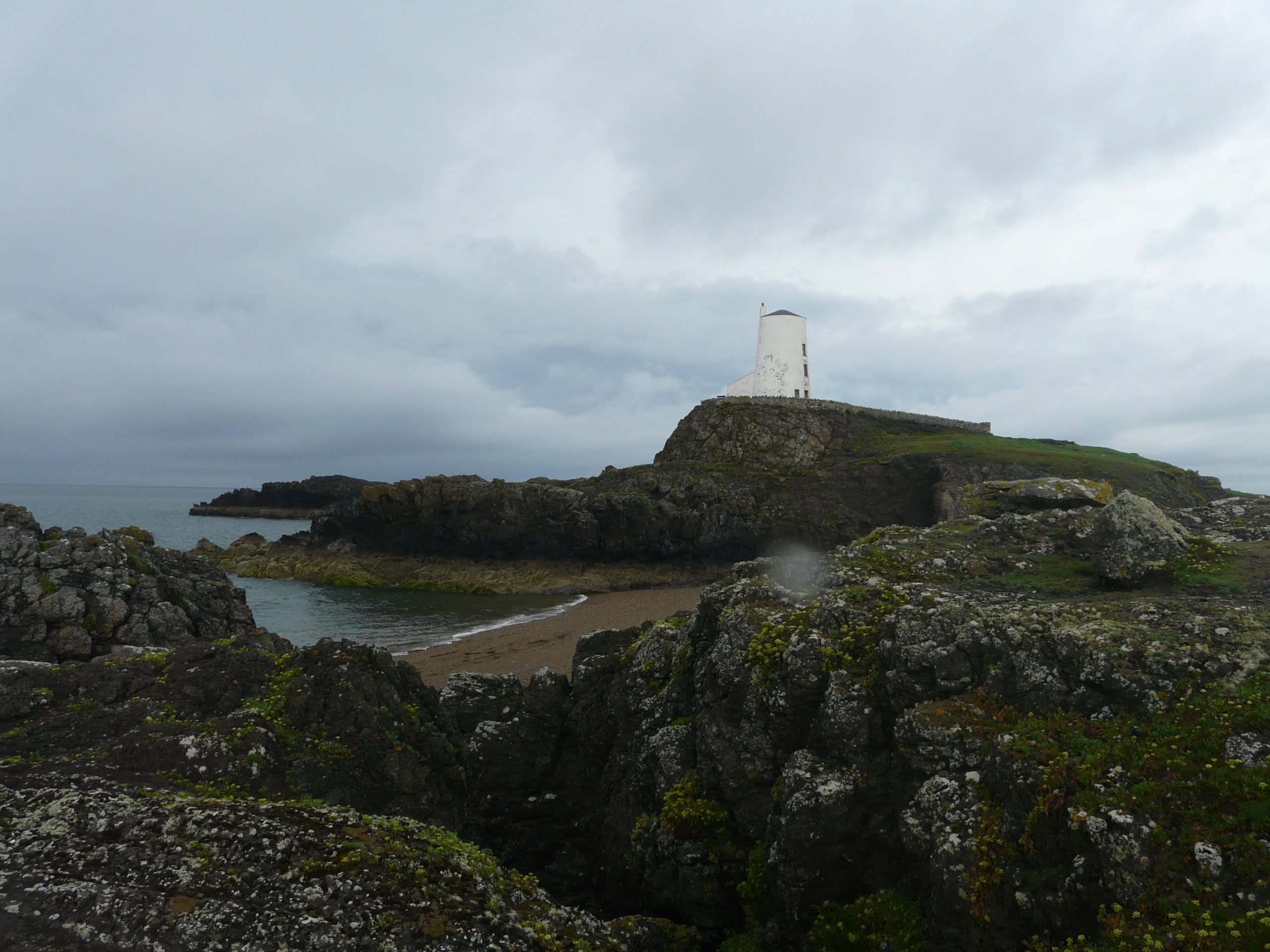 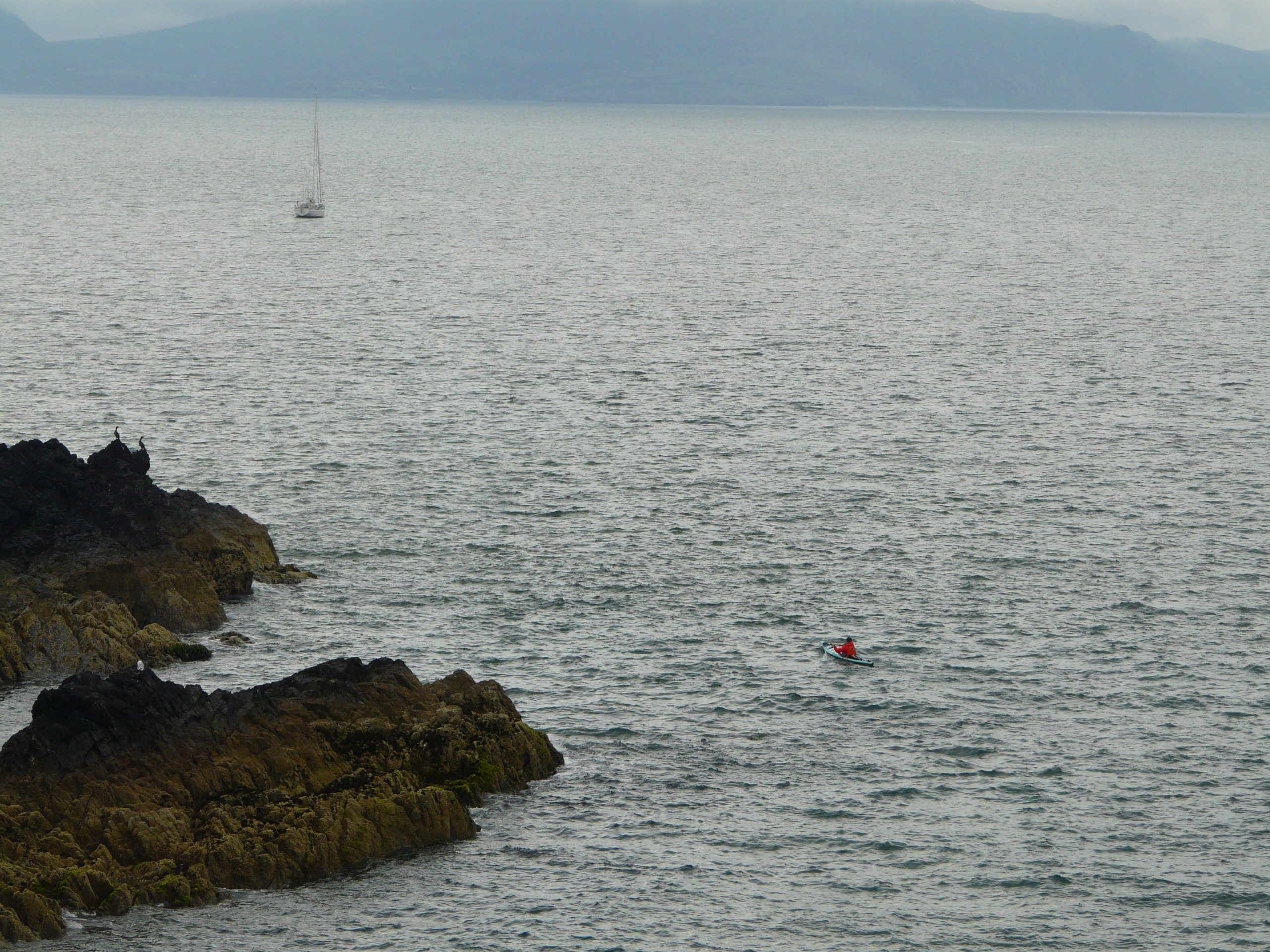 As I reach Llanddwyn I can’t say I have a lot of love for the ‘island of love’ currently. I’m utterly wrecked (completely knackered actually). The arms are still going around, but that’s only because they are too tired to stop.

The GPS throws a fit, but I can’t be arsed to press the buttons. The compass is stuck on the front for a reason after all – 100 degrees to Abermenai.

Abermenai arrives, I look forward to the feeling of being back in the comforting duvet-feel of my home water. The wind disappears, we are making 8 kts but somehow I don’t feel like I’m getting anywhere.

It’s getting stuffy warm now, the water is oily calm. The buoys have an encouraging lean, hinting at flow and pointing the way.

Plas Menai drifts by in a sleepy look of indifference and then we glide into the 5 kt speed restriction at Y Felenheli. Yeah whatever.

A downhill slide through the Swellies, not risking any surf waves tonight, not after all this.

Of course close to Bangor Pier we reach ‘The Bubble’ and my utterly-loved assist fades, the boat slows. But it’s not to blame. Newton wins once again.

Gallows Point means a final-stage slog-against for the last few minutes, just to remind you who’s in charge.

I can’t be arsed to avoid the kid fishing on the pier (‘sorry mate’) and then we’re done. What a bugger that was. The Boss doesn’t even ask ‘How was it?’ – she can see. But we live by old rules – any time is better than no time. And to finish Number 8 is good – going the ‘wrong-way’ even better. I don’t bother to say ‘Never again’ because I know there is no point. Well not until after Number 10 anyway.

Got to give a grudging respect to the little Taran 16 too – the boat done good. Very good.

If you want a ‘proper’ sea-paddling challenge then go for an Anglesey Circumnav. Just do it the other way around FFS. 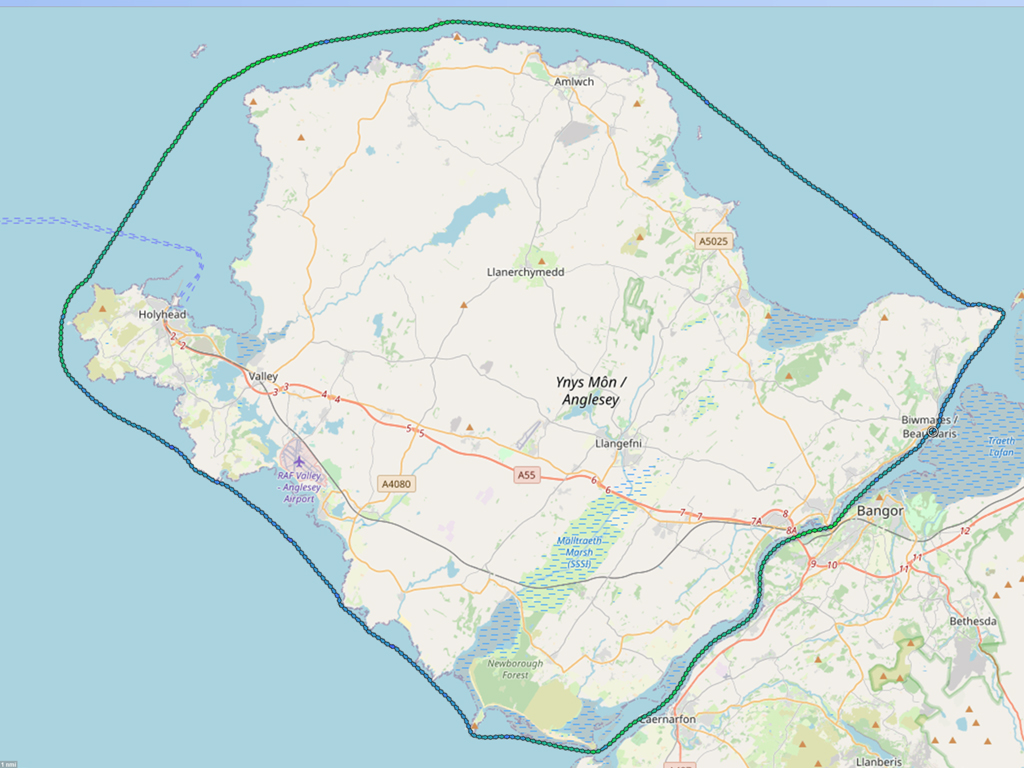