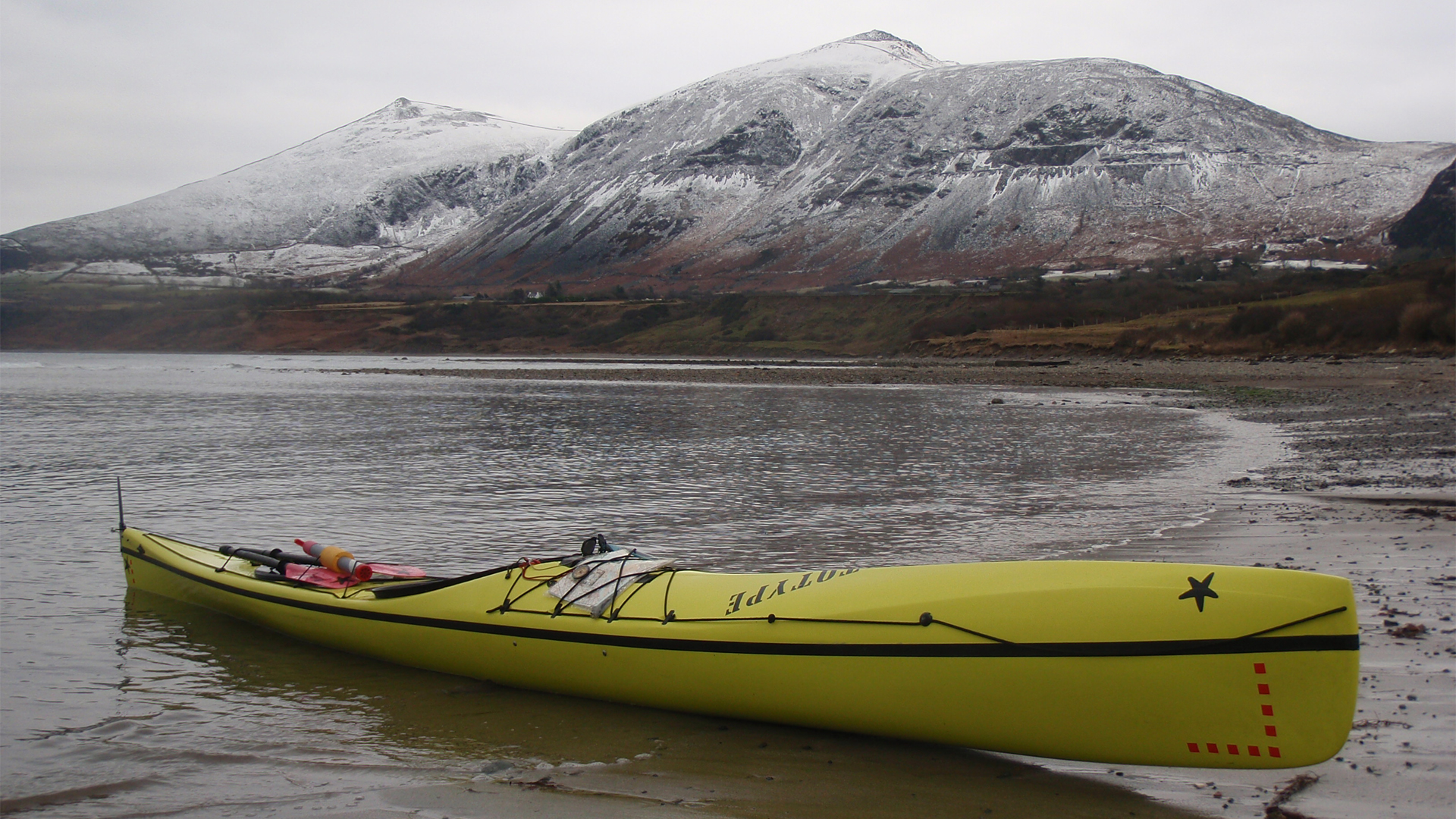 A number of years ago I drifted into the Rockpool fold and found myself shaping a couple of wild water racing (WWR) boats. We used these boats to try out some new ideas and hull features, we were pleased with what we learnt and how the boats paddled.

Later following my first record, the Anglesey Circumnavigation, I was chatting with Mike Webb about what I saw as the limitations with the boat that I had used. The conversation ebbed and flowed over a few days and before we knew it there was an idea for a new Rockpool kayak – something different to complement the fleet, a sleek fast boat.

In the earliest days the plan was to build a boat to improve on the record, but at the same time Mike saw it as opportunity to steer Rockpool in a new direction and gain new knowledge and experience.

I had ideas of what should go into the boat, we combined those with what I thought were the better bits of the WWRs and before long I was shaping a boat that Mike would name the ‘Tarran’ (later in the production boat the extra ‘R’ was dropped). Though it was to be a fast boat it was not a pure out and out racing boat, it would have to earn it’s keep too – it had to be a sea boat that people could, and would want to paddle.

After a lot of sweat (literally), filler and dust I finished a plug; a mould was made and the boys built a nice sulphur yellow kayak (‘Citron’) – the first prototype. It was all a little eleventh hour, we had missed the first tidal window for the Anglesey Circumnavigation and the next was was only 3 days away! So it was straight down to the Straits (sorry) to throw it around in the rough; I can still remember the session that I paddled that day, poncing around in the sunshine around Ynys Gored Goch. From the start I knew we had a good boat.

More paddling than I would normally do immediately before a record followed and then I found myself on the beach, packing kit, fitting watches and generally faffing. I hadn’t really expected to be here, the Tarran didn’t look like it would be ready in time and so I hadn’t really anticipated or planned for a realistic attempt – 3 days to learn a new boat was just ridiculous! The weather was far from ideal also, but sod it I had nothing to lose – you can’t lose your  own record after all. It would be a good test for the boat if nothing else. The boat I had used in the very first attempt (2005) was such a wet ride, these conditions would show if we had improved on things with the design of the new Tarran.

The boat went well and a record was set, I had taken a good chunk off the time too – doubly satisfying in such choppy conditions.

It was still a prototype and to be fair did look a little rough, if you looked hard you could see where I had grafted pieces together. But then it was a concept boat after all, just to prove it worked as an idea – and it did. It wasn’t meant to look pretty!

But as I continued to shape the next stage prototype, the word was starting to leak out, negative comments started to comeback in the opposite direction. For a British boat, it broke the mould and did have distinctive, if not unusual looks – some found this hard to accept. I started to hear the comments, I was unsettled by some that I heard. There were many discussions within Rockpool on whether the boat would sell; I must admit I wasn’t convinced myself. We chatted on how to raise a favourable profile.

The work on the second prototype included changes based on experience obtained from paddling many Prototype-1 miles, there was also plenty of work to smooth the form into something suitable for a production boat. Mike was (relatively!) patient, as I learnt to compromise while he pointed out shapes which were and were not possible when it came to going from plug to mould. Eventually we had a boat on the water.

It paddled well too.

The number of comments had continued to build and I was starting to get annoyed, I knew we had a good boat – a very good boat. But the talk wasn’t encouraging – ‘it isn’t a real sea kayak’, ‘it can only go around Anglesey’, ‘it’s too fast’, ‘too unstable’, ‘it’s got a rudder’ (oh, for ****’s sake!) and so on.

I continued to paddle the Taran and entered it in a few races. The best way to find how a boat really handles is to push it hard and a race is a good way to do this. Things went quite successfully – it didn’t get beaten – and we learnt more.

But the ‘it isn’t a real sea kayak’ comments continued – now it ‘was only a race boat’ it seemed.

I started to get pissed off, the people with the loud mouths and vocal opinions had not paddled the boat and most had not even seen one! Yet they still voiced their opinions.

Probably the most disappointing side to it all was the blinkered and ill-informed comments made by people who should have known better – without even realising it a number of ‘experts’ demonstrated their lack of  knowledge and experience.

However work continued, and after a few minor tweaks and some polishing to finish the production boat (now known as the Taran) I paddled one from Anglesey to the Isle of Man. The boat had gone around Anglesey, won sea kayak races and made a 40 nm open crossing – ‘ah yes, but it’s still not a sea kayak of course…’

And then they started to get a little silly –

‘It’s too long for my jetty’ — yes, really! It was pointed out that it was 3 inches shorter than the kayak the gentleman currently owned.

‘Beacause the rudder is vulnerable’  — broken 1 cable in 3 years.

‘Because it’s too fast’ — I’d rather make a fast boat go slow than to try to make a slow boat go fast.

‘Because it doesn’t have a pointy front end’ — and your point is?

‘Because it’s too narrow for me’ — perhaps you are too fat for it, n’est-ce pas?

‘The square bow will turn down wind’ — Hmmm, let’s stop and think about that one for a mo. Take your ordinary ‘pointy’ boat – a Cetus, Etain, GT, Xplore, Romany or whatever. Does it turn down wind – no. Let’s chop the bow off vertically at the waterline and seal the hole so you now have a squared bow. Does it suddenly turn down wind now? No, of course not – if anything it will now turn more into wind. Up yours ugly!

But someone else had twigged the potential; Mike’s patience had paid off and we realised that the boat was beginning to sell – increasingly well. The Taran mould was in demand as more boats left the Rockpool factory. I also started to realise that my little baby was morphing into more than the original boat was ever planned to be – we were paddling it in more and more different roles ourselves, and others were too.

I had long since binned my WWR training boat for the winter and used the Taran instead to make the most of the dodgy conditions, but now it was also getting use in the summer. It was fast enough, and as I got older it was also easier! The Boss and I were increasingly using it as a day boat around the Island too. Other boats stayed in the garage as the Taran just became the boat we liked to paddle – wherever or whatever we paddled.  My G.T. is full of slugs and spiders, and I’m not quite sure where I left the Quest…

Then Harry Whelan and Jeff Allen chose to take the Taran on their 25 day record breaking Circumnavigation of Ireland – and post-event feedback was good. The Taran had now completed a sizeable expedition. The ‘it’s not a sea kayak comments’ were beginning to fade now.

Recently I took a Taran around the UK in 72 days  – Joe Leach followed 2 weeks later in 67 days, he paddled one too. Not many UK sea kayakers can dream of attempting an expedition of that length – the Taran had completed it twice.

So: it is used as a day boat, crosses open water, wins races, makes a damned good training/fitness boat, completes longer expeds than most ever will, runs downwind like a beauty, surfs with a smile and you can even  get it in pink.

But I suppose it’s still not a real sea kayak – you know, one of those boring, ordinary ones…