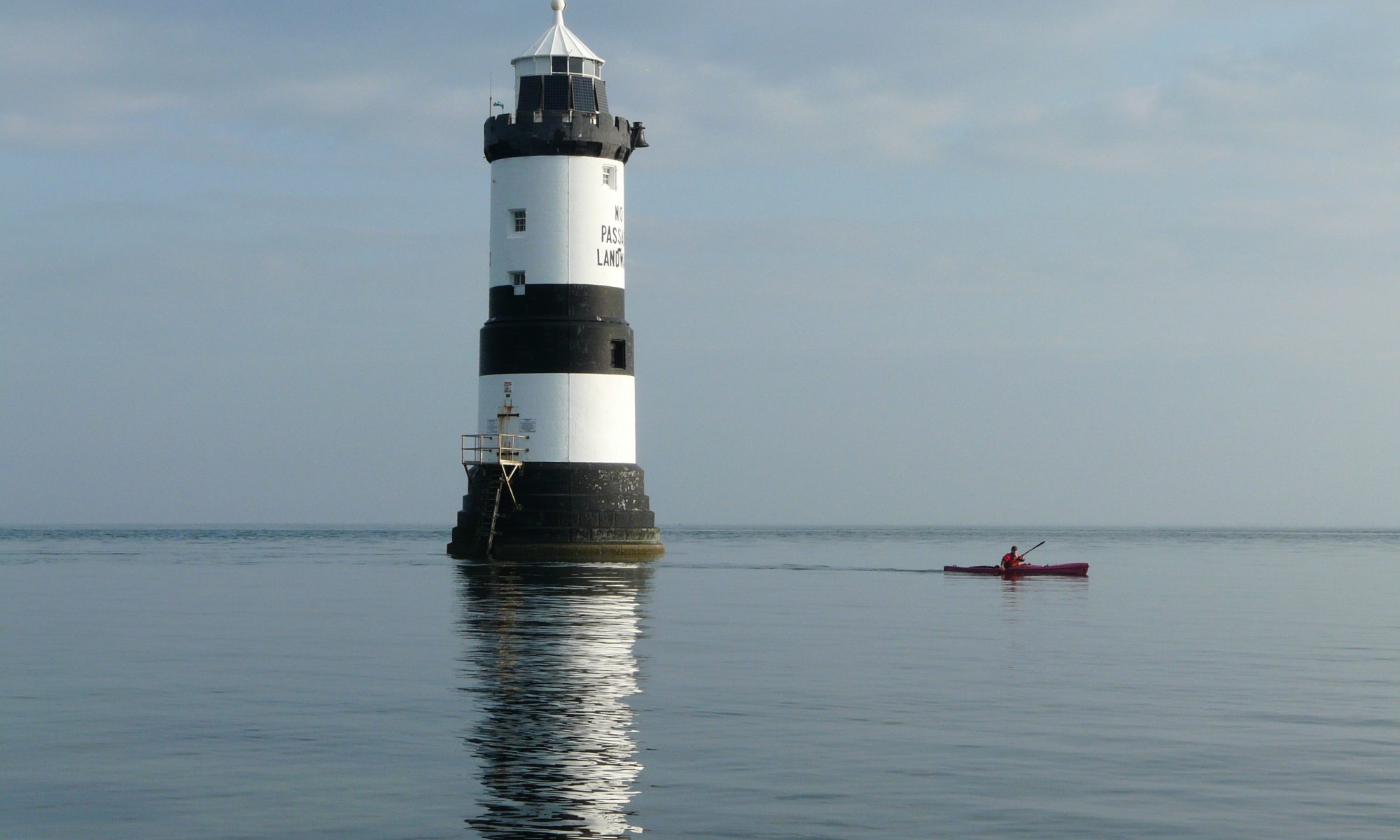 The Isle of Anglesey lies just off the coast of North Wales and is a popular spot in the UK sea kayaking world. The island brings many facets of sea kayaking: cliffs, sandy beaches, tidal rapids, overfalls, islands, sheltered waters, crossings and more. It also has some of the fastest tidal flows around, this factor combined with its size (around 75 miles / 120 km around) make it a great single-day paddling challenge.

A few days ago I had a go to lap The Island. Here’s how it went.

The plan was to complete a lap of Anglesey by the end of March. Time is needed to recover from these exploits, so it was to be completed before the end of March or it would eat into other plans.
Training started in mid-December and built steadily from there, through New Year, a cold January and a windy February.

Usually these circumnavs are done on Spring tides – get your plan right on the Anglesey lap and the assistance you get from the tide is significant, perhaps around 17 or 18 nm for free!
However on Neap tides the help you get is roughly halved (it depends how you define Springs vs Neaps) – for a 4.5 kt paddler that probably means an extra one and half hours of paddling over the lap on a 7 m tide, or so is the theory.*
The early March spring tides were too early, I wasn’t ready. The intended mid-month ones were blown out by stiff easterlies or pushed aside by our Gwynedd Coastal Counties Challenge paddle.
So that only left the springs at the end of the month i.e. the coming weekend. However the weather doesn’t look good once again, so I took the hit and went yesterday on an 8.0 m tide. Earlier than ideal but not the end of the world.
Though a good time is nice it’s not the be-all-and-end-all, there is more to it. The lap itself is always a challenge; it demands preparation, planning and paddling, and all are useful things to practice and develop. It’s also one hell of a long-miles training session.
So a neap attempt it was, like it or not.

I chose yesterday because the weather was as good as you get. And neaps isn’t all negative, it means the flow-against-hit (you have to somewhere) is smaller, and it also means the N coast is likely to be less boisterous, so you can keep the boat running easier. Neaps also mean a later start,  no 03:30 alarm clock for this one! Though that does mean you are likely paddling (and nav-ing) into dark.

All in all it would be another useful day to add to the Lifelong Paddling Experiment.

Because of the late start it meant that the more appealing start point had to be moved to juggle the make-the-cruxpoint-vs-the-not-ridiculously-late-finish compromise. And so a new start for this one of Puffin Sound.
The weather was perfect, though a little hazy as I paddled towards Beaumaris. The start time meant I had to slog against the flow until Bangor which was a bit pooh to be frank, I was already 15 min down at the end of the first hour!
But the flow in the Menai Strait picked things up nicely and all went well from Bangor Pier to Llanddwyn Island, with just enough of a breeze to keep things from getting too warm. 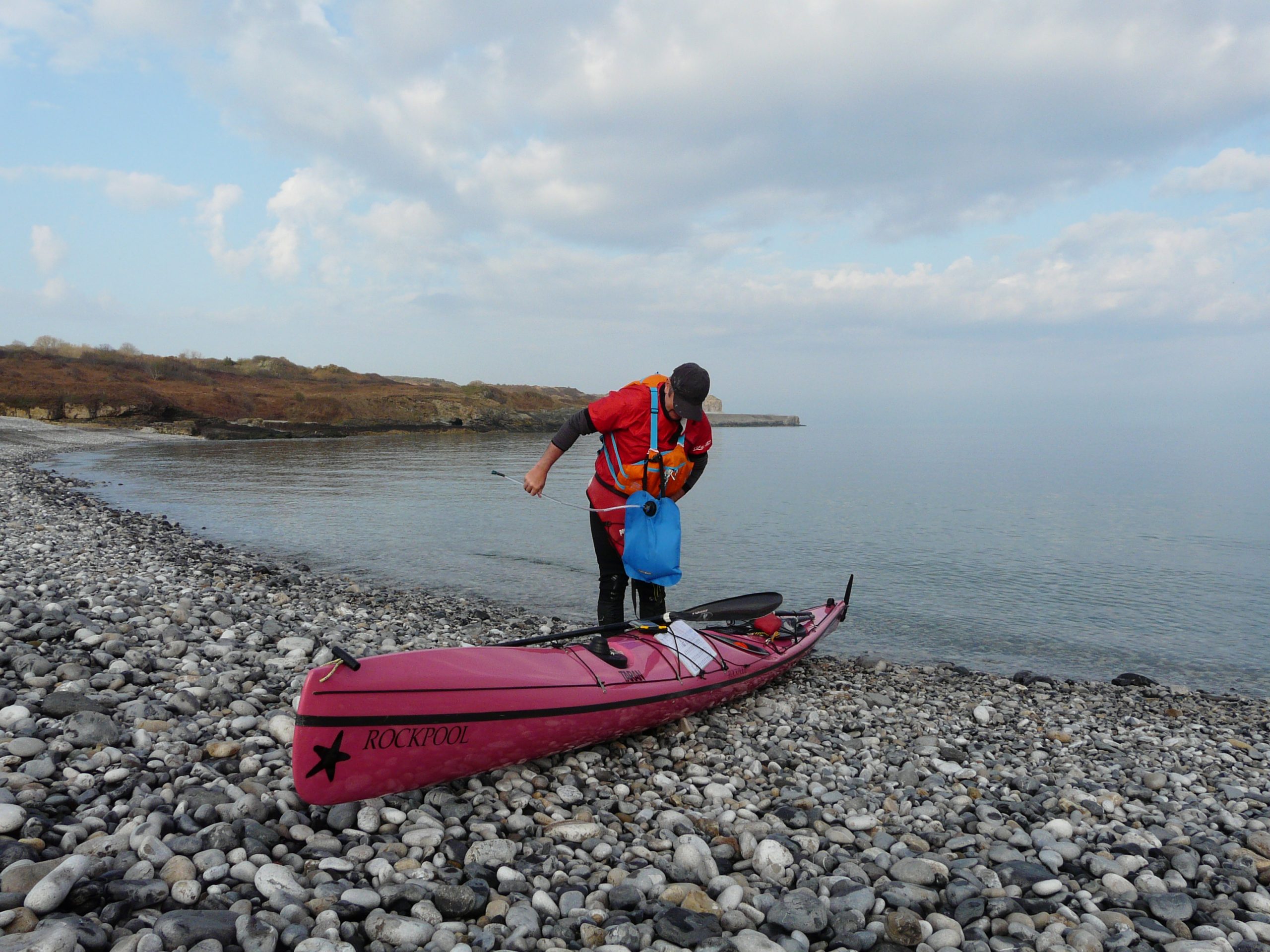 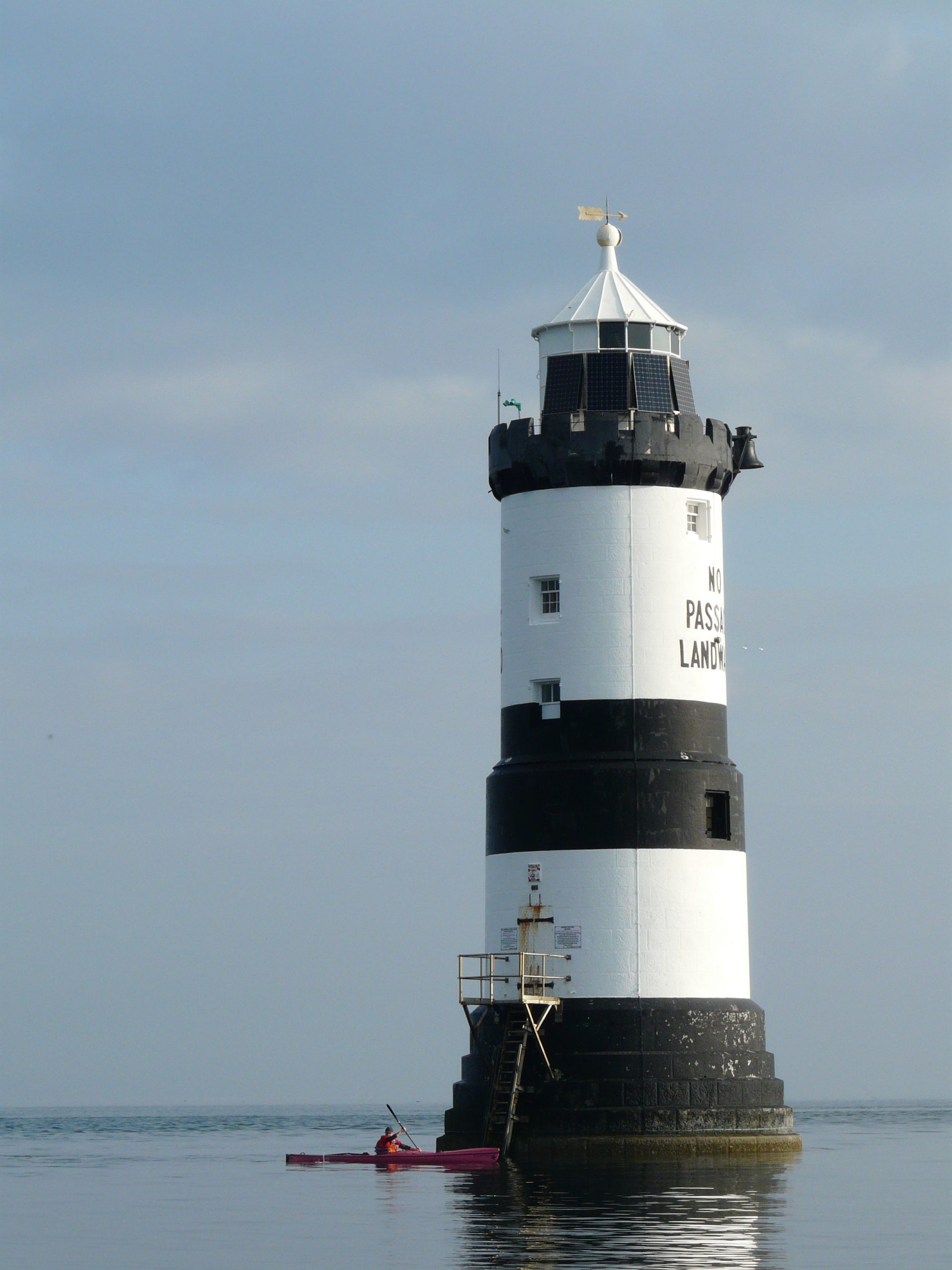 The W coast is always a bit pooh too, as you have to slog against the remnants of the ebb, but you have to do it somewhere and I chose the W side.
By Rhoscolyn I’d been going a while, and the slog meant that the novelty was wearing off a touch. But I managed to bump into Stuart Leslie (along with Hazel and Steve) who were exploring The Beacon. A brief chat lifted my spirits and then as Hazel noticed the flow had started I jumped on the conveyor and headed N once again.
I wasn’t exactly sure what to expect from a ‘Neaps lap’ but I aimed to be under 12 hrs. I figured once I got to Rhoscolyn I should get assistance to the end (unless I was late) and so I needed to reach Rhoscloyn with a certain avg speed to make the 12 hrs. I’d done that, so that made me smile too.

Penrhyn Mawr went by but South Stack did not loom into view. I could hear the foghorn on the lighthouse but the cliffs (and the Taran) were firmly shrouded in a heavy mist. I never did see South Stack.
The South Stack tide-race splashed by in the mist too, but the neap tides meant it was only gentle splashy. The mist persisited until I was well across Holyhead Bay – you can see the wiggles on the GPS track as I wander around with no horizon to fix on.

Crossing Holyhead Bay I could hear the mournful South Stack foghorn behind, I could hear a louder booming one from over in the Skerries direction and the squeaky little one from Holyhead Breakwater – a triumvirate of foghorns. All was good, until a fourth one joined in (accompanied by the gentle rumble of marine diesels) from my rear left quarter – great.
There was no ferry scheduled at the time but there was something there, so it was head-under-the-duvet-and-paddle-harder time, hoping it would go away. And it did.
Things were getting a little chilly in the soggy breeze too now, time for a cag change perhaps? But suddenly I was out into bright sunshine once again and pleasingly I could see where I was going – it helps.

The neap tides meant the North Coast was less unruly than usual, there were plenty of boils and some small chop, but nothing that needed threading through. So, though the flow was less than on springs, I could keep the boat moving nicely and lost less than expected.
The North Coast is always pleasant, it ticks by nicely as you see firm progress, and with plenty to keep you occupied – both views and flow.
Point Lynas sort of appeared through the re-appearing mist, though it wasn’t as thick now. And after a nice wide line I turned SE in smooth conditions towards Puffin Island – 10 nm ahead.

As I passed Moelfre the sun set and soon I needed a head torch to nav. I had planned on following the light from Penmon Lighthouse to guide me to the finish, but, yes you’ve guessed it, it was lost in the mist. Once again you can make out the distinct wiggles in the GPS track as my heading wandered as I paddled inside the milk bottle, without a horizon. The Penmon light finally broke though with just under 2 miles to go (and my heading straightened up!) and I pushed nicely to the line.
11:10:55 for the 120 km.

I was pleased with this one for a number of reasons.
My first lap of the island was in 2004, paddling with Mike Chandler. This lap was my 11th one, 10 of them solo. I’ve started at different times, from different places, gone in different directions, different weather and different boats – it’s all been interesting and informative. I’ve learnt so much while I’ve been doing it.
We had a number of questions before I started on how it would go on neaps. And once again it was shown that taking the numbers, putting them on paper and then into a plan (and believing them) does make it work. Do your homework, all you have to do then is to paddle to the plan.
Paddling-wise I paddled stronger and smoother than I have for a good few years and that’s a good feeling too. A winter of good training, some good training last year and a few other things are all paying off. I also think that use of the kayak-ergo over this last year has been significant, but that’s another story.
I’ve got to say that I really enjoyed this one.
Yesterday was a slow day, I was a little sore and somewhat tired, it was time to rest and re-view.
But it all made me smile as I drank tea from my new pink PSK mug… 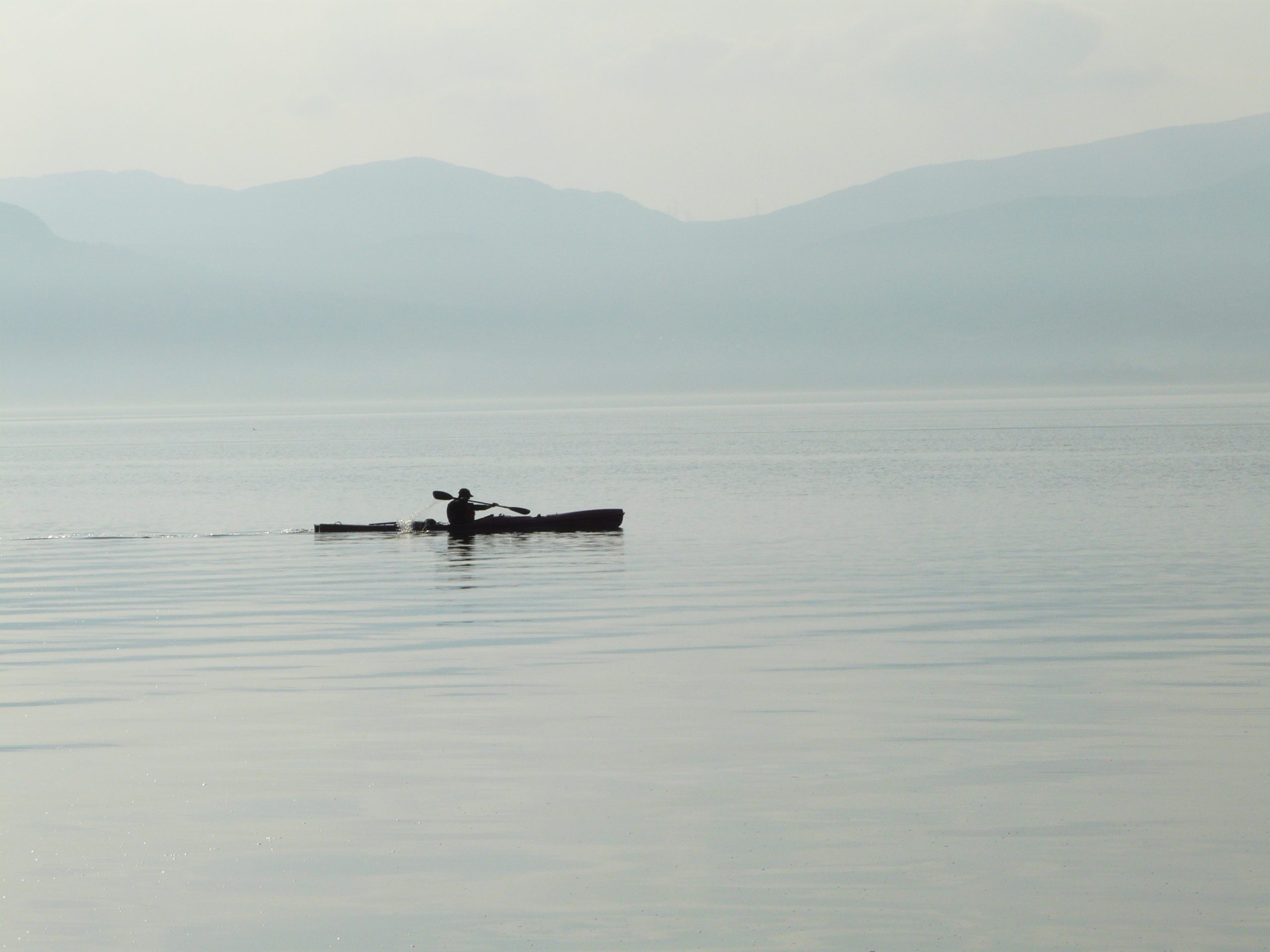