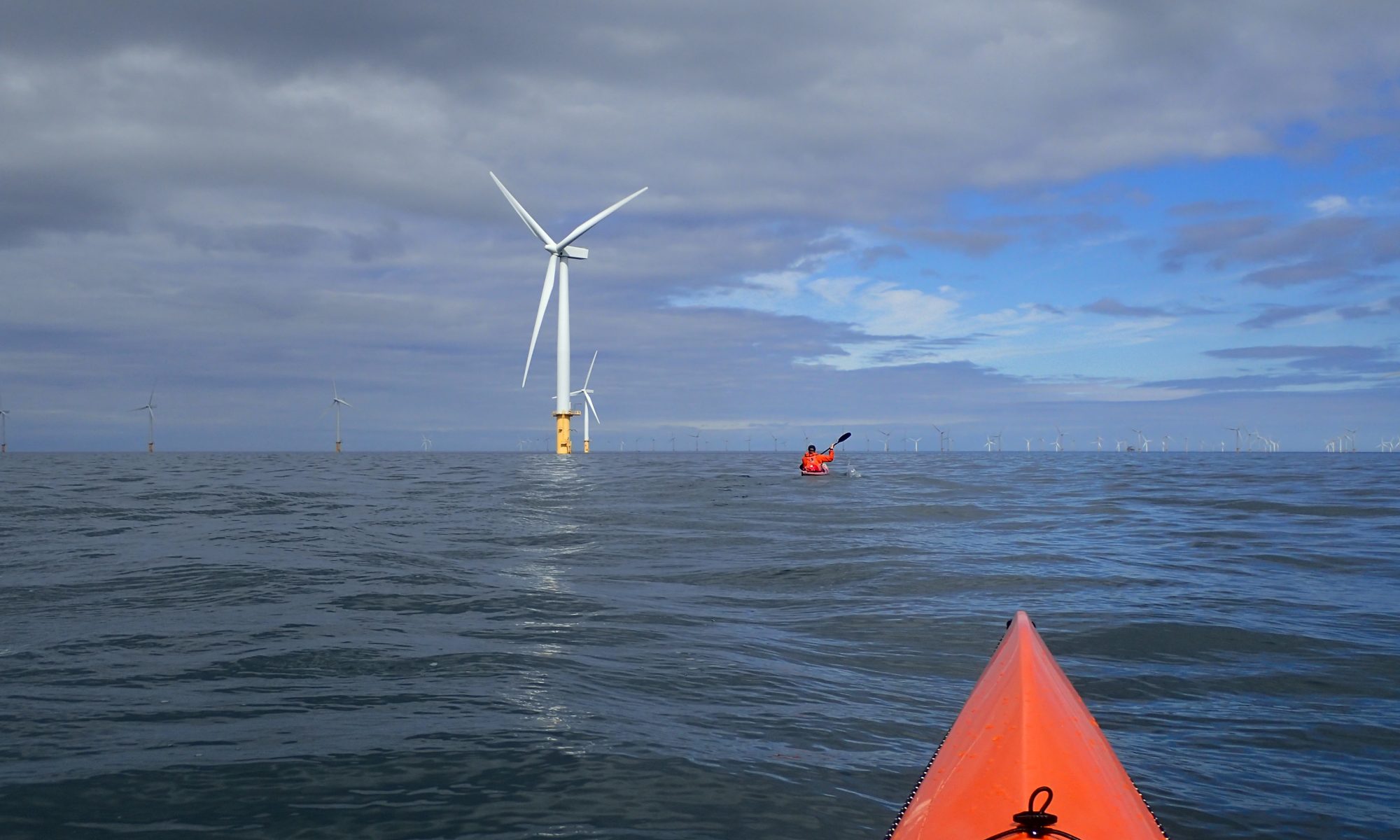 For the Easter weekend we returned out attention to the Coastal Counties Challenge. Part of the aim of the challenge is to stretch paddler’s outlook (including our own) to sections of coastline that don’t always get so much attention. And so it was with this trip – Rhyl to Llanfairfechan.
At first look it seems like a linear paddle along the coast between Rhyl to Llanfairfechan (or vice versa), but the Isle of Anglesey and the Great Orme collude to encourage a little more planning. The flow direction of the tide splits in the area (roughly) of the Great Orme, so if you don’t want to ‘paddle against’ then you need to juggle the timings a little. On top of that the start/finish line at Llanfairfechan dries too, so a low-water start or finish doesn’t really work. We decided to split our trip over two days: Day 1 – Rhyl to Llandudno, West Shore, and then Day 2 from Llandudno to Llanfairfechan, taking the ebb on the first day and the last of the flood on the second.

We started out at the mouth of the River Clwyd, on a flat day with only a slight breeze. Sunshine was forecast, it was pleasantly warm but with a bit of an overcast. 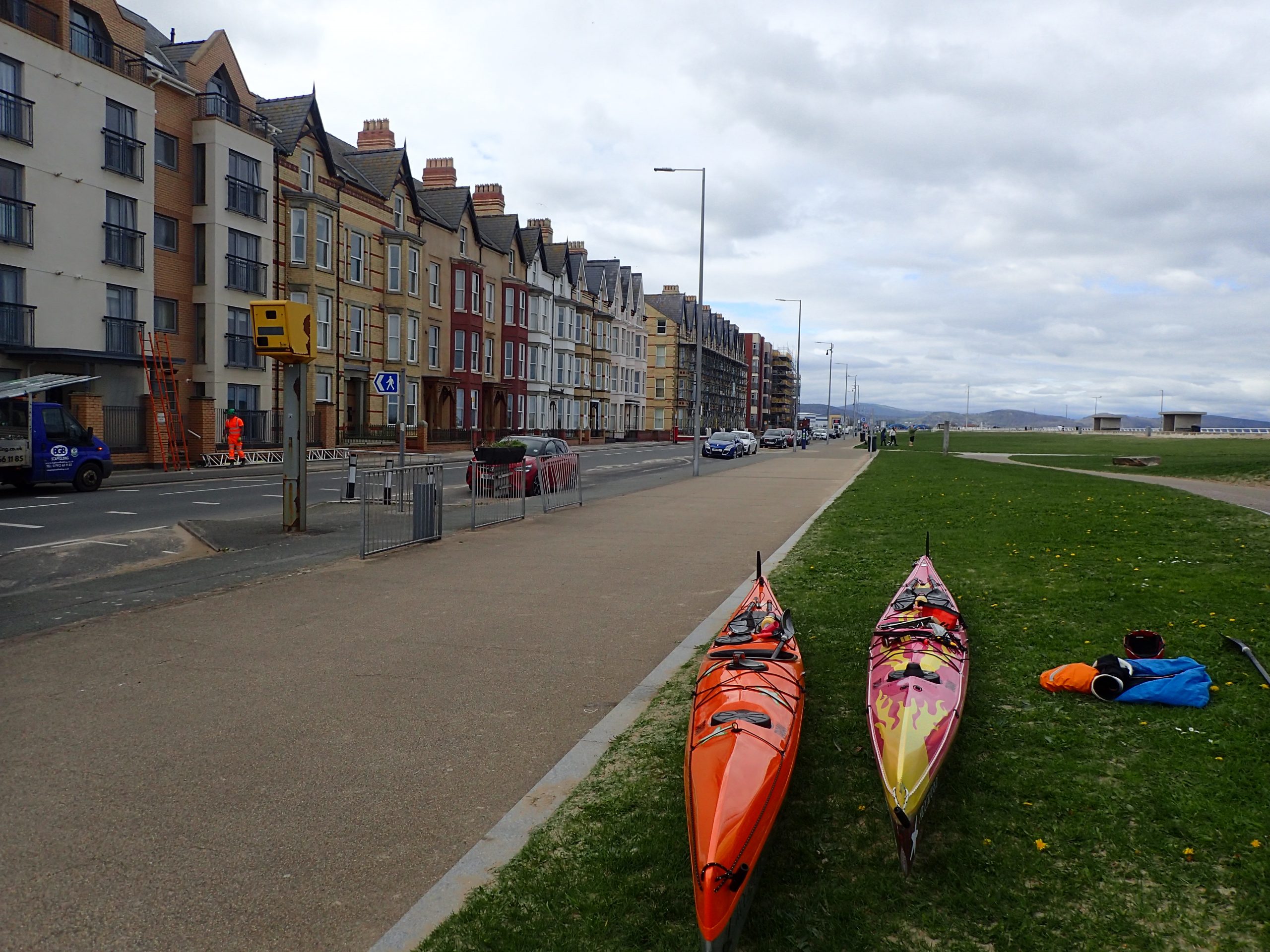 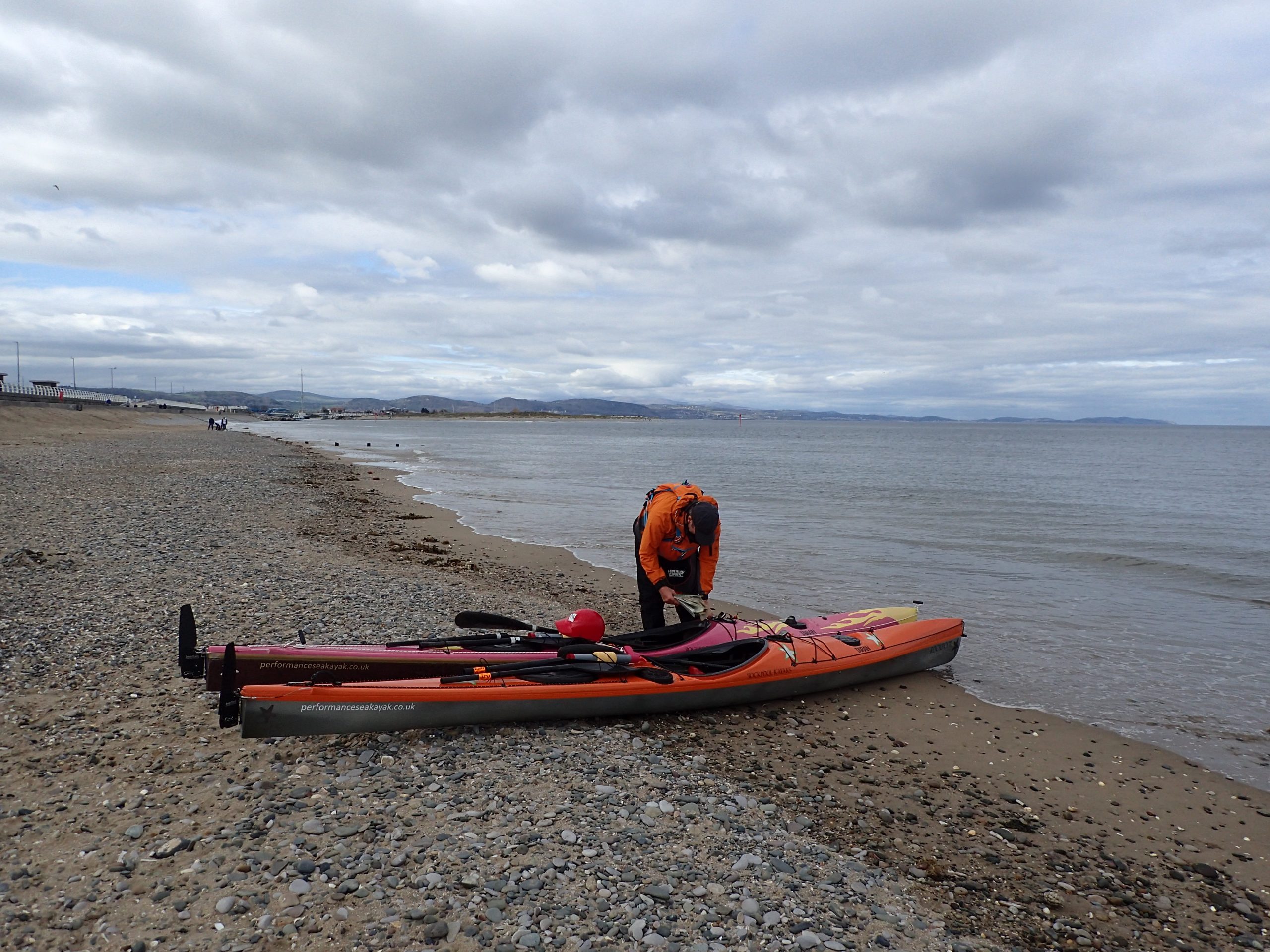 Initially we planned on a nosey along the coastline, but the good conditions encouraged us to venture offshore to take a look at the wind turbines of the Rhyl Flats Wind Farm. Though the turbines are an ever-present accompaniment for drivers along the North Wales coast on the A55, it had been more than a decade since I last paddled out for a look.

Today seemed like a good day for it, so a quick change of plan, turn right a bit and off we went.
And of course there’s not a lot to say really; you paddle out for an hour, get a sore neck looking up at the incongruous things and then after a brief butty-break you turn left to continue to Llandudno. 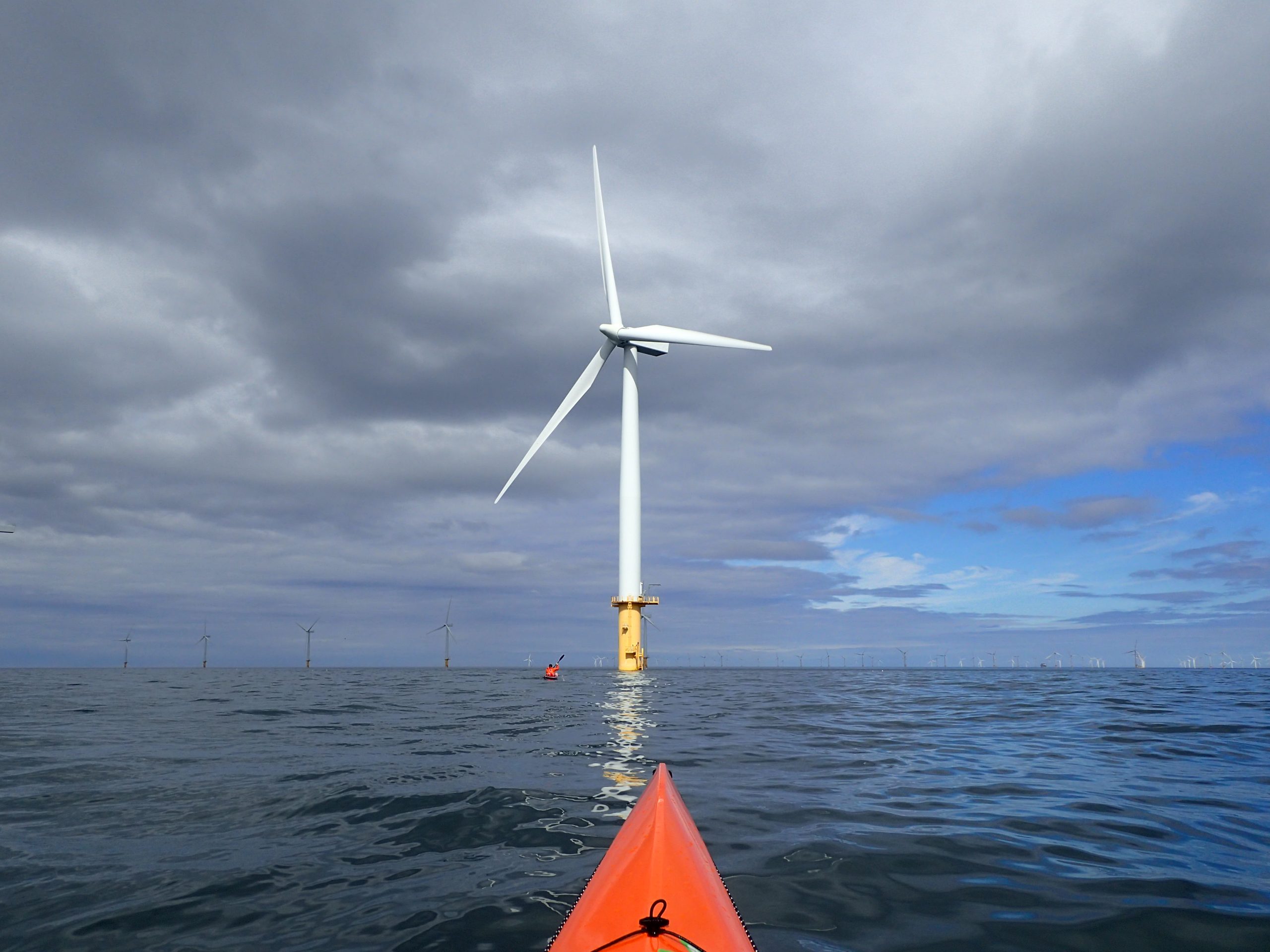 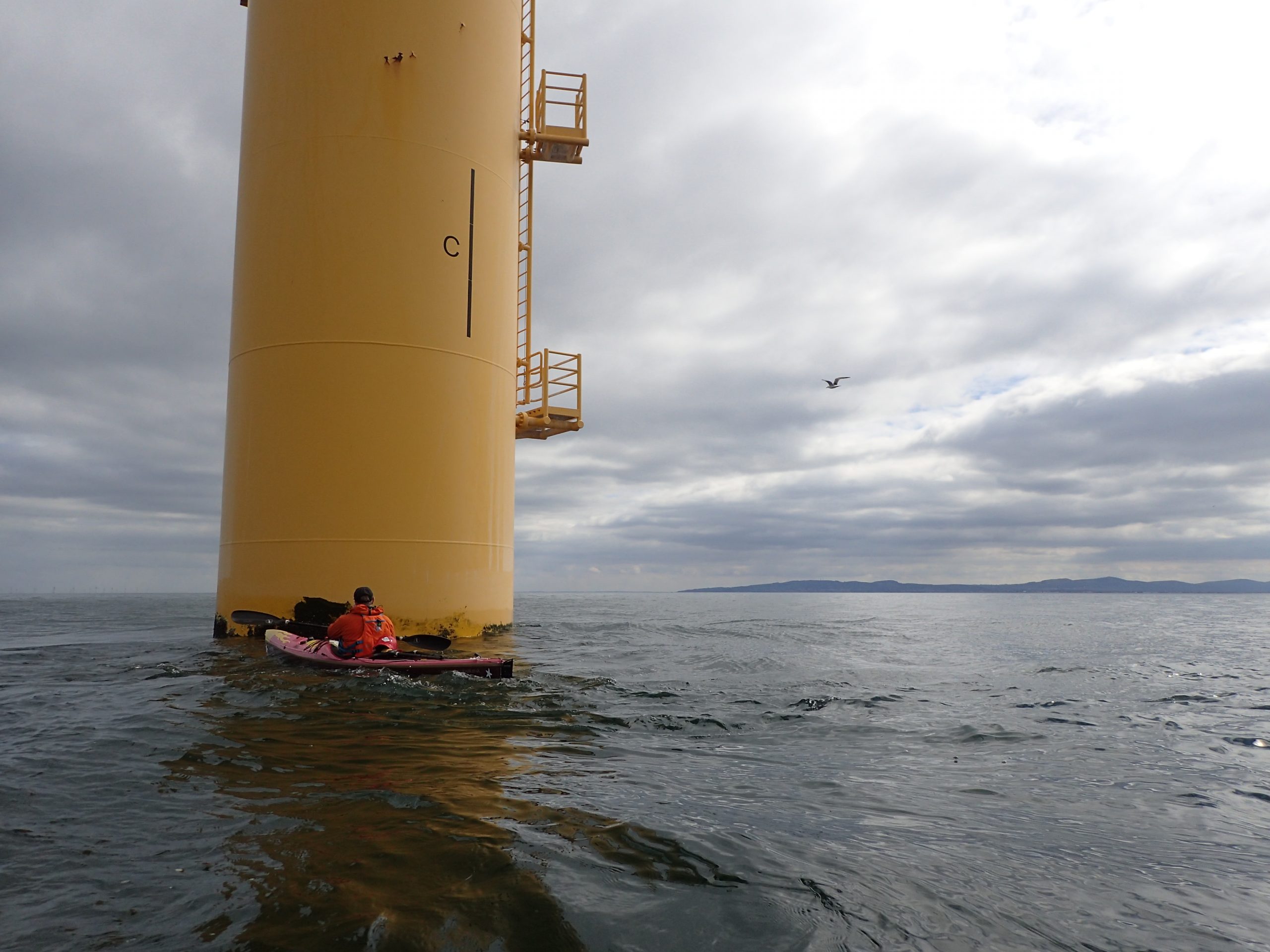 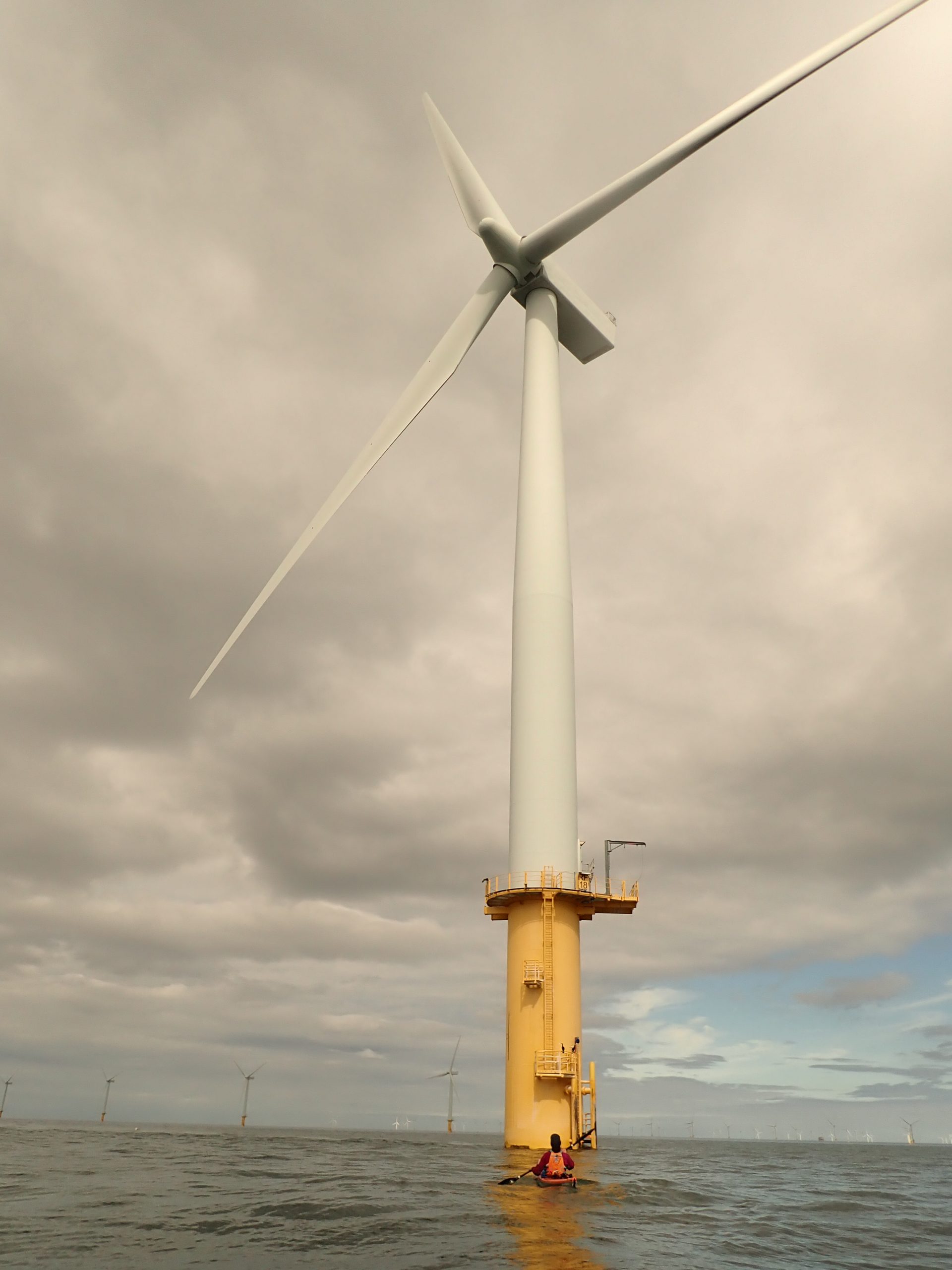 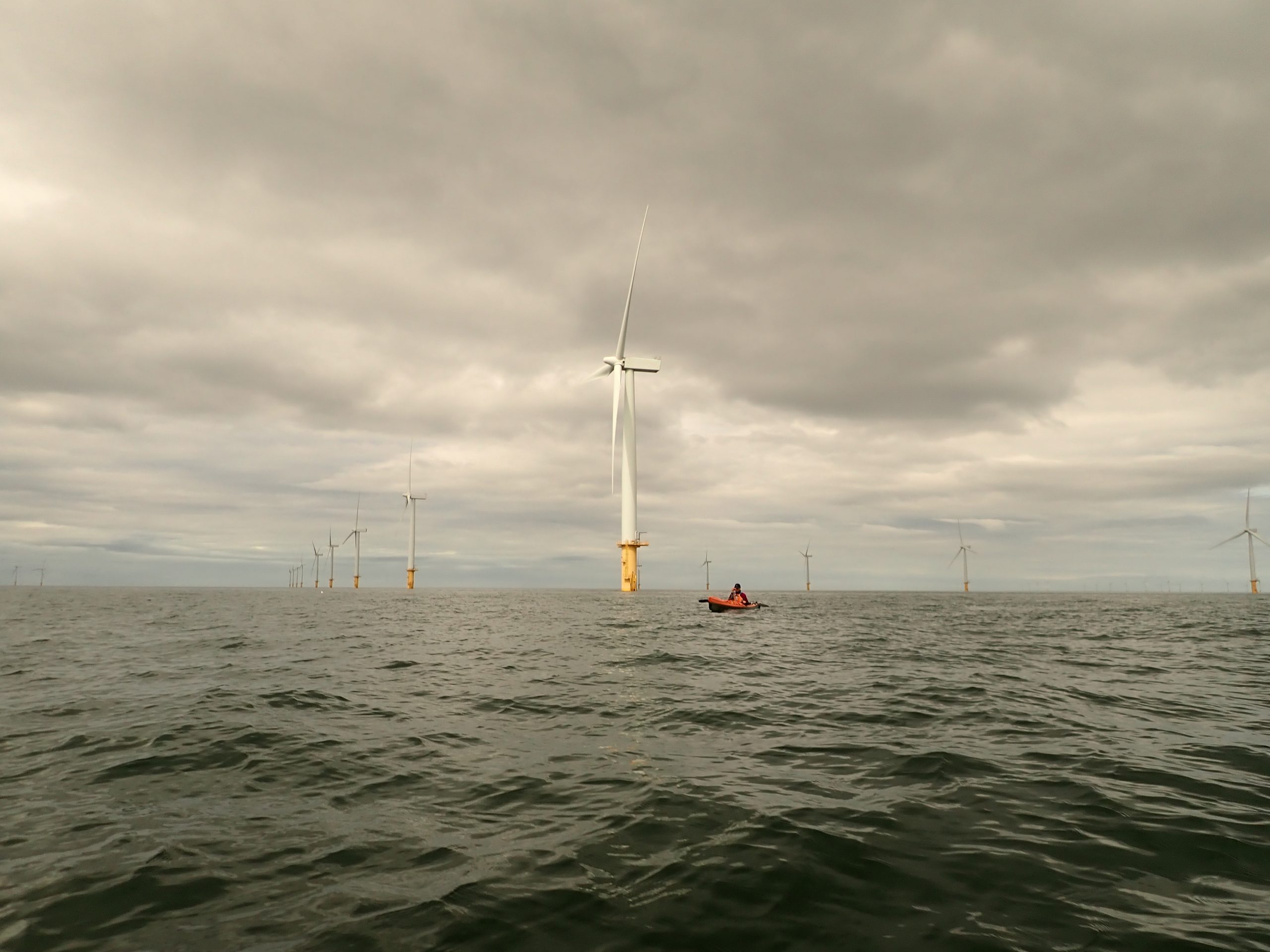 On the way out we did come across a large raft of unknown (to us) ducks who squeaked their way into the air as we passed by. They had the look of Eider but were a touch smaller and darker – Scoter maybe?
At the wind farm the Great Orme still looked a long way away, but the gentle eddies behind the towers hinted that the ebb tide would help things move along.

The flow increased as we made our way westward and by the time we drew level with the Little Orme things were ticking along nicely.
It would have been nice to take a look at the Little Orme too but it was a day for offshore paddling, though this did give us a good panorama view of the coastline and the hills set behind. We were far enough out to avoid the jet-skis by Llandudno, though we did sneak in close at the end of Great Orme to push against the eddy for the final paddle into the beach at West Shore. 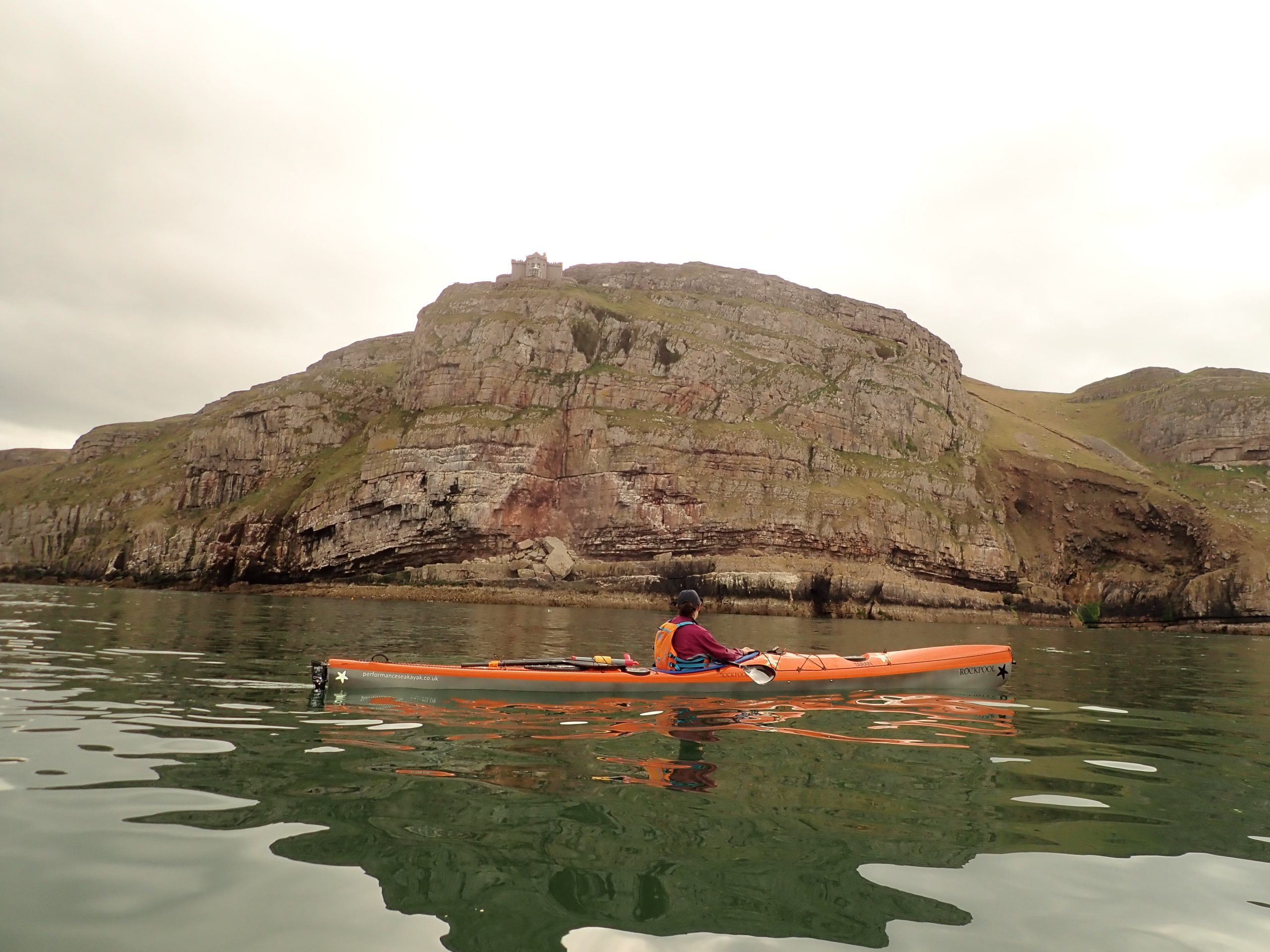 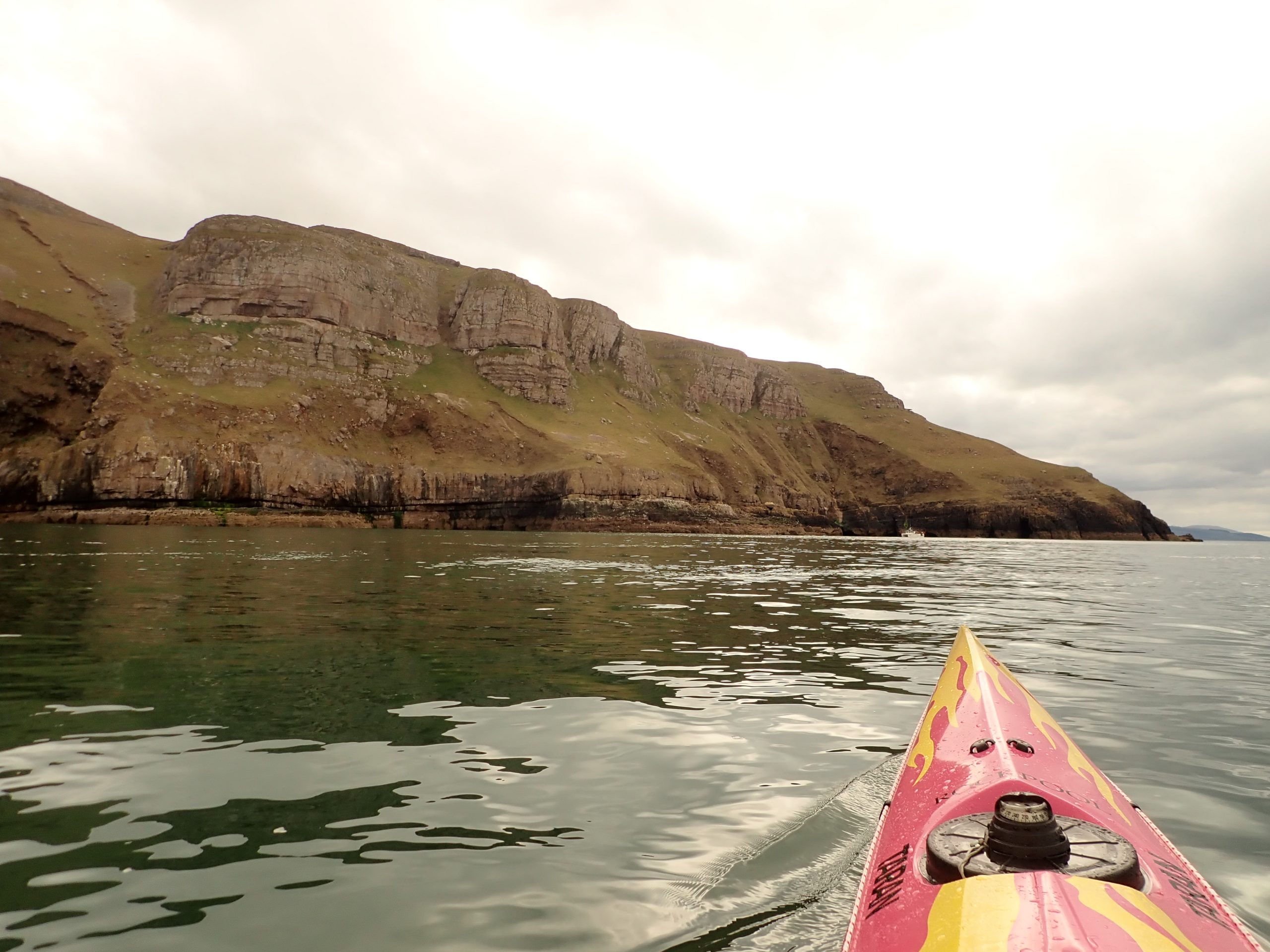 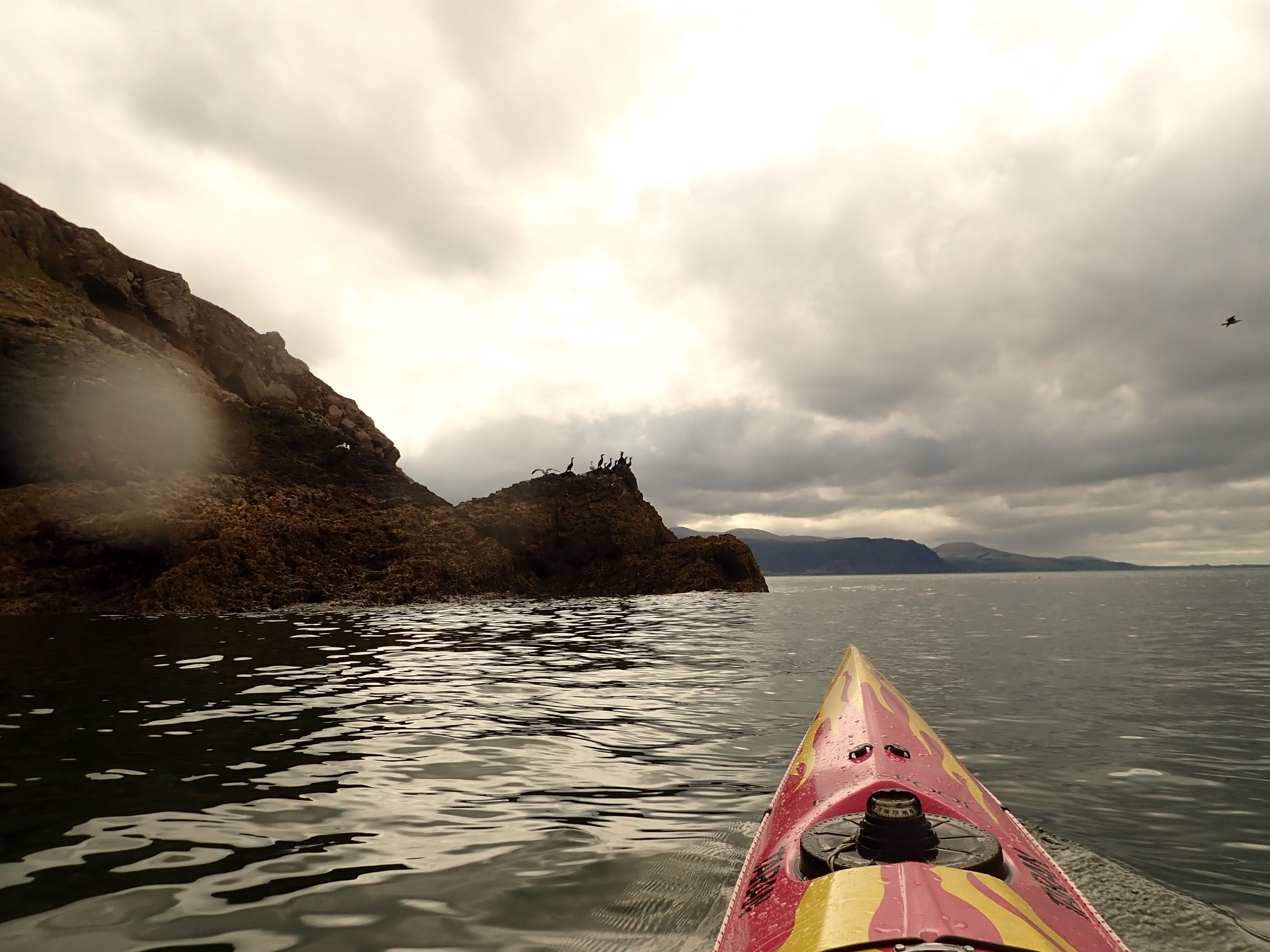 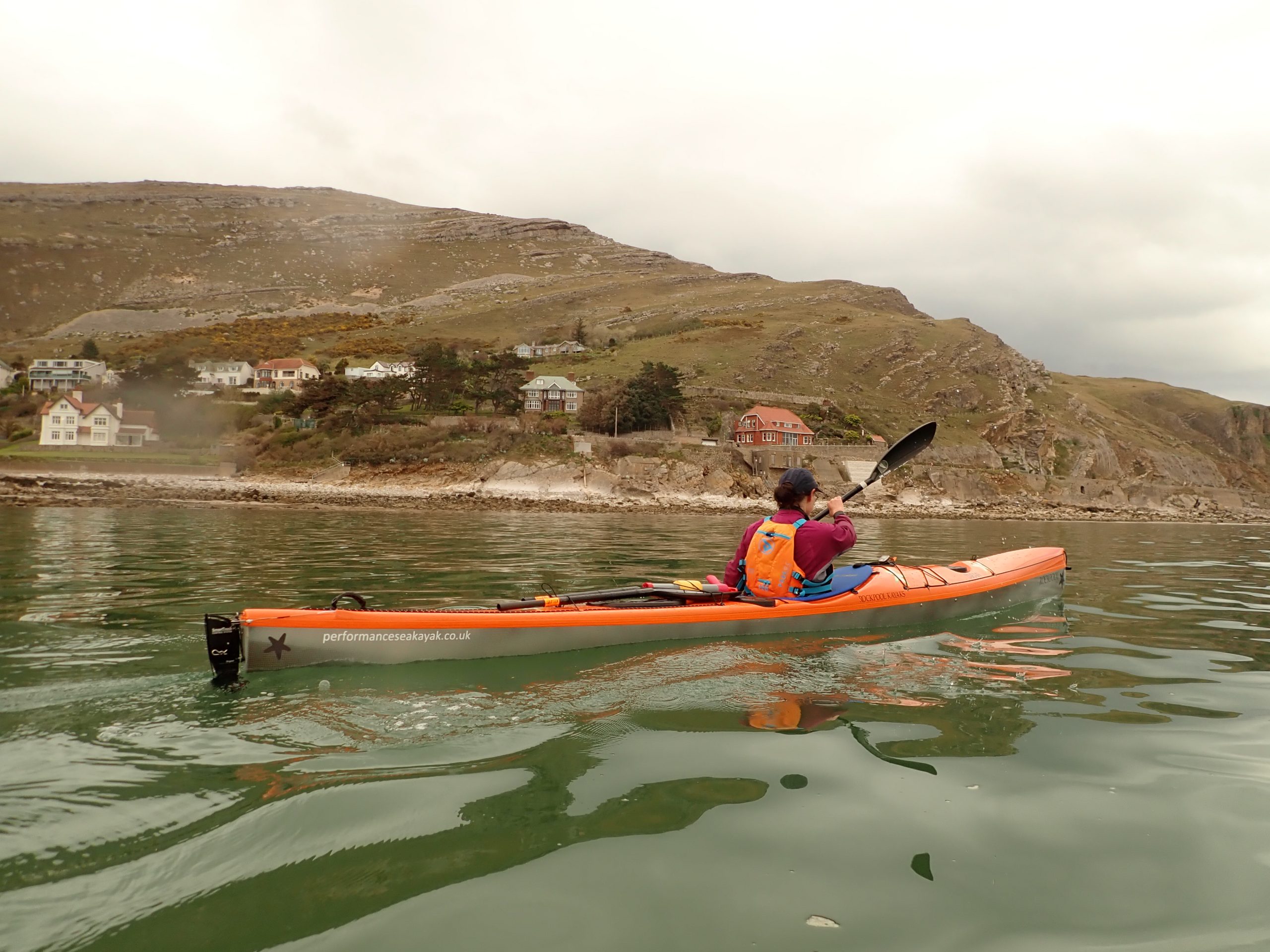 As we paddle into the beach we look across to spy Anglesey and tomorrow’s destination of Llanfairfechan in the distance.
All in all a rather pleasant paddle, and different to ‘the usual’. 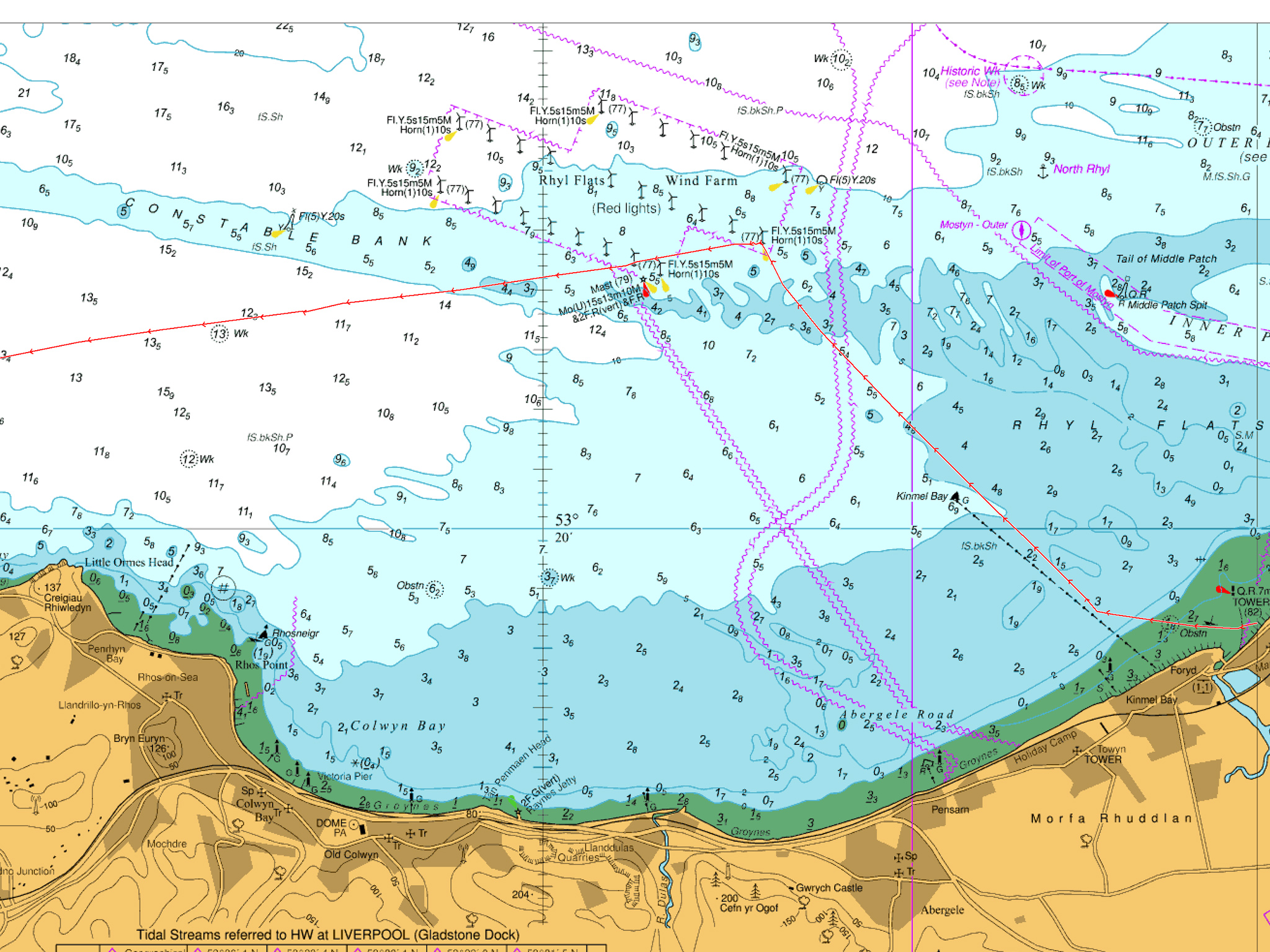