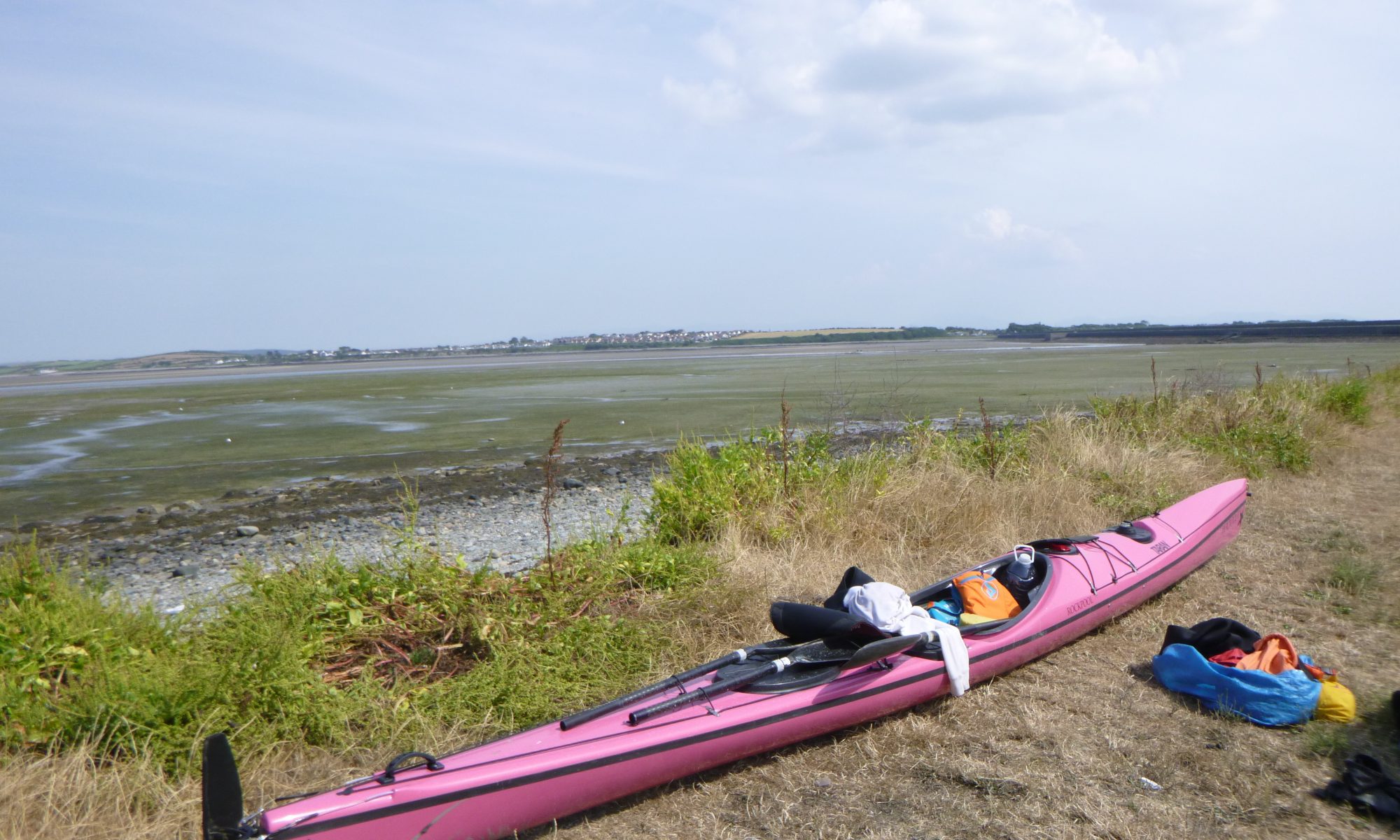 As I mentioned on the lap of Holy Island last week, there is a trick to getting round the island efficiently. The crux-point is the tidal window at Stanley Embankment. This in turn dictates the (usual) counter-clockwise (CCW) direction of the trip, as the embankment-timings match you with the CCW ebb tide. So this means you gain assist for the majority of the trip. Ideal.

But what about going against convention, going CW instead?

That Stanley tidal-window requires an understanding of the tides, planning, and a realistic knowledge of your paddling capabilities in order to get there at a specific time. Get there too early and you consider the gaps in your knowledge, as you sit and wait. Get there too late and you miss your chance for the day. Come back next month…

But it’s not too difficult: work out how far it is from your start point, then a simple ‘time = distance over speed’ calculation should give you a good idea of start timings. Throw in a little educated guesswork for the counter-flow of the Cymran Strait and things should be reasonably accurate.

With a bit of application, arrival should be possible within a few minutes of the required ‘window time’.

After Stanley is out of the way, CCW life becomes more straightforward. Join the tide and follow it home. Just chase the bubbles – easy peasy – lemon squeezy.

But what about going the opposite way around? A clock-wise (CW) lap?
Timings on the all-important Stanley are pretty much the same, though the catch is that this now means that for the majority of this trip you are going to be paddling against the flow of that CCW ebbing tide. Aaah…

But of course flow makes eddies, and Holy Island has plenty of ‘sticky-out-bits’, so can we use these to our favour? Oh yes.

This time Stanley-timing is easier, as the counter-flow and shallows of the Cymyran are removed from the uncertainty-equation. So take Stanley early, it makes it easier for the timings. Choose your start point and calculate the distance to Stanley. Re-arrange S = D/T to give you your start-time and set off on time to get to Stanley as required. Easy peasy – lemon squeezy, once again.

The Inland Sea is pretty-much the same as before, sheltered and shallow.
But the Cymyran is different now. The ebb flow is with you this time and that not only gives a speed advantage but also the luxury of following the deeper water too – no eddy hopping or sand-skirting is needed this time. Woohoo!

Zooming out of the mouth of the Cymyran Strait you turn right now for Rhoscolyn. A straightforward paddle along the rocky reefs of the low-lying rocky shore until you meet Rhoscolyn Sound. Here the flow is against you – like it or not. However as you make your way along the rising cliffs, eddies abound and help to take the sting out of the counter flow. The large cave at Rhoscolyn Head arrives without too much hassle.

Now there is the 3 mile width of Trearddur Bay to cross. Initially the flow is against, as expected, but the far promontory of Penrhyn Mawr (PM) to the North deflects the ebbing main flow further out. Of course this creates an eddy of sorts, which stretches surprisingly far to the south.

So the plan is to ‘feather’ into the Trearddur  Bay a little and take a mild hit initially, but then aim to catch the PM created eddy to assist us later. And somewhere around mid-bay that’s just what happens – a 0.5 kt loss at Rhoscolyn Head becomes a 1 kt gain near to PM.
To our left the main flow is still heading S, though here we are riding a surprisingly wide conveyor-belt of helpful tide going N. It takes us comfortably beyond Abraham’s Bosom, there’s no need to caress our way around the edges, and then drops us off just S of South Stack.

The tide race is still running here, but of course there is the useful gap between South Stack and Holy Island. As you head beneath the footbridge you will have to push against the flow in the gap, but it is only gently against us and it is little price to pay to bypass a slog against the South Stack race.

Gogarth Bay is next and a look at the map should hint at the flow here. The bay has been scoured out over millennia by the predominant flow of an eddy, this eddy should now take us nicely to North Stack, and it does.

There is no real way to avoid the North Stack race, but it is late in the tide now and the flow is half-hearted. Assuming we have a calm day and have avoided the ferry timings (you don’t want to be surprised by a sudden, no-warning ferry wash close-in) then straightforward progress can be made up the cliff-bottom eddies. Be on barnacle alert though!

A couple of smaller headlands follow and provide help. It is time for the same strategy as Trearddur Bay, feather in until the flow is acceptable and then feather out as it grows in your favour. Soldier’s Point slips by and Holyhead Breakwater appears.

The smooth, linear nature of the breakwater means close in eddies are of little, if any, use. The Breakwater itself either helps you or it doesn’t, so just point to the end and paddle. Avoid the danglers at the end and turn in to revel the sight of Holyhead ahead.

Maybe your day is done here?  If not* then we hope our timings help us to thread one way or another between ferry movements, before we head towards the muddy shallows of Penrhos.

(* Make use of your chosen strategy to cross the entrance to Holyhead Port – see https://www.performanceseakayak.co.uk/Archive/holy-island-circumnav-2021/ )

We must finish here, Stanley Embankment is ahead with the sluice emptying against us in a white torrent. The day is done.

And that’s the paddle of Holy Island Clockwise – the same island but a rather different day.

I planned on a start near Holyhead but ferry timings persuaded me to amend that. So I started nearer to Penrhos. It worked initially but I ran out of water close to the end – and wellies are needed for the low-water sludgy slog back to the beach if you do it this way.

You can compare the two routes, with-tide and against-tide, in the images of the GPS tracks.