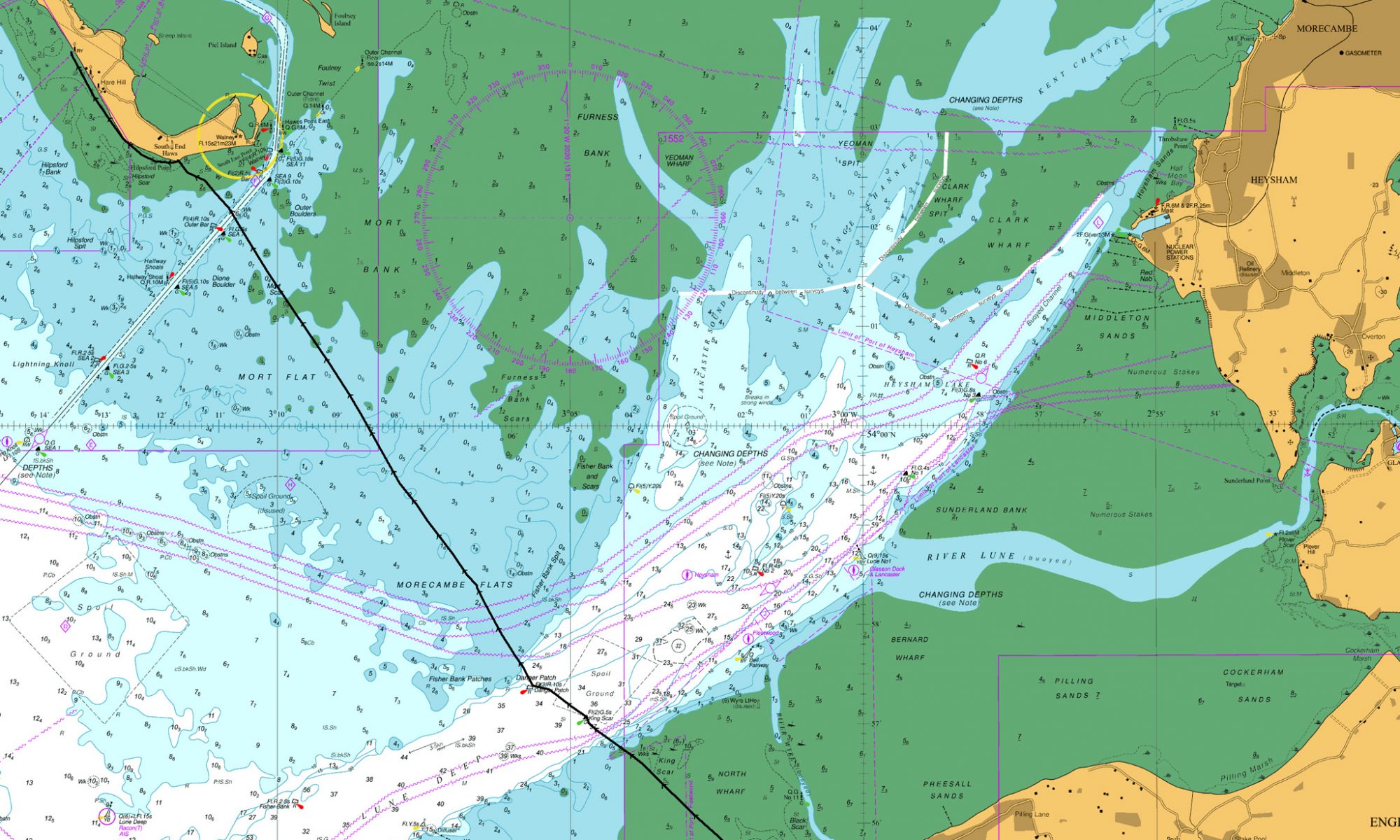 Morecambe Bay is a large bay in the north-west of England, it separates the counties of Cumbria and Lancashire and drains a number of rivers. It dries extensively to form large expanses of sand and mud. These sandflats are notorious for soft mud and quicksand and in many places the incoming tides move across the rippled sand at running pace. Add the fact that most of the rivers have some form of tidal bore too, and it is no surprise that The Bay has a history scattered with tragedy. In recent years the most indelible was the death of over 20 cockle pickers who were caught on the sands by the incoming tide one night in 2004.

However the place also has an allure. The large sands brings a wide range of wildlife, and the bay is bordered by impressive scenery of the Lancashire Fells and the the Lake District mountains. From the paddling point of view it sets a challenge, with the destination just in sight (on a good day) it beckons you to take the challenge to overcome tides and distance to get to the other side. It is one of those trips to look back on and say to yourself ‘I did that’.

And so I’ve been wanting to paddle across The Bay for years, eventually I did it from N to S in 2015 as part of my GB Circumnav trip, but that was a pretty crappy day. I’ve been looking forward to having a better go.

Now it’s not the longest of crossings, in fact at just over 9 nm (10 miles) it is one of the shorter ones. However there are those sandbanks to dodge, a ferry lane to cross and a variety of tides to plan for – high, low, in or out. Throw in that reputation mentioned earlier and it’s not a place to be taken for granted.

As we arrive at Fleetwood the sight of the King Scar sandbank sitting proudly meters above water level does not do the confidence much good. With only an hour to go before start-time, surely all that can’t cover in time?

It’s just what I don’t need, I’m tired, grumpy and faffing already. I’m faffing because I’m nervous and trying to find any excuse to put off the inevitable. I’m tired because I didn’t sleep well last night. The Morecambe Bay reputation got to me…

So it’s time to ‘get logical’ – it’s only a 9 nm crossing (I’ve done ones of 50 nm before), the weather is good – there is a breeze but it’s gentle and behind, the conditions are calm, it is hazy but I’ve paddled worse. Trust the plan, and get out the check list. It ensures I miss nothing but it also helps me focus – to push out the doubts and distractions.

The boat packed it’s now time to carry it down and drop it in the water, no launch from the sand here – both Taran and me are better than that. But there’s also another reason for it, I straddle the boat and ‘flop in’, it’s what I do day-in day-out in training. As soon as I do it, I’m at home. The switch has been flicked, I’m focussed, confident and keen to go now. It’s what I do and where I belong. It’s what I train for. 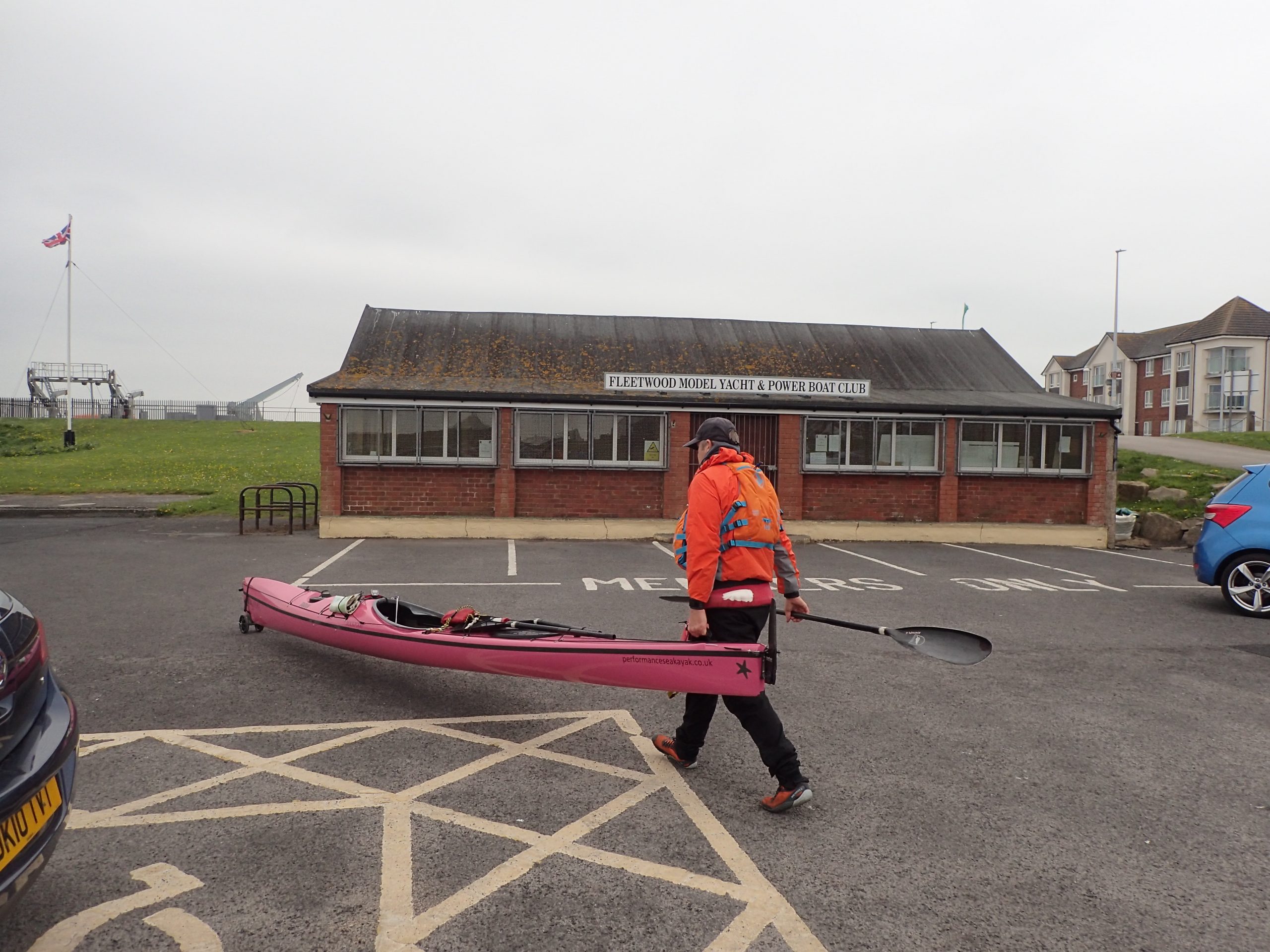 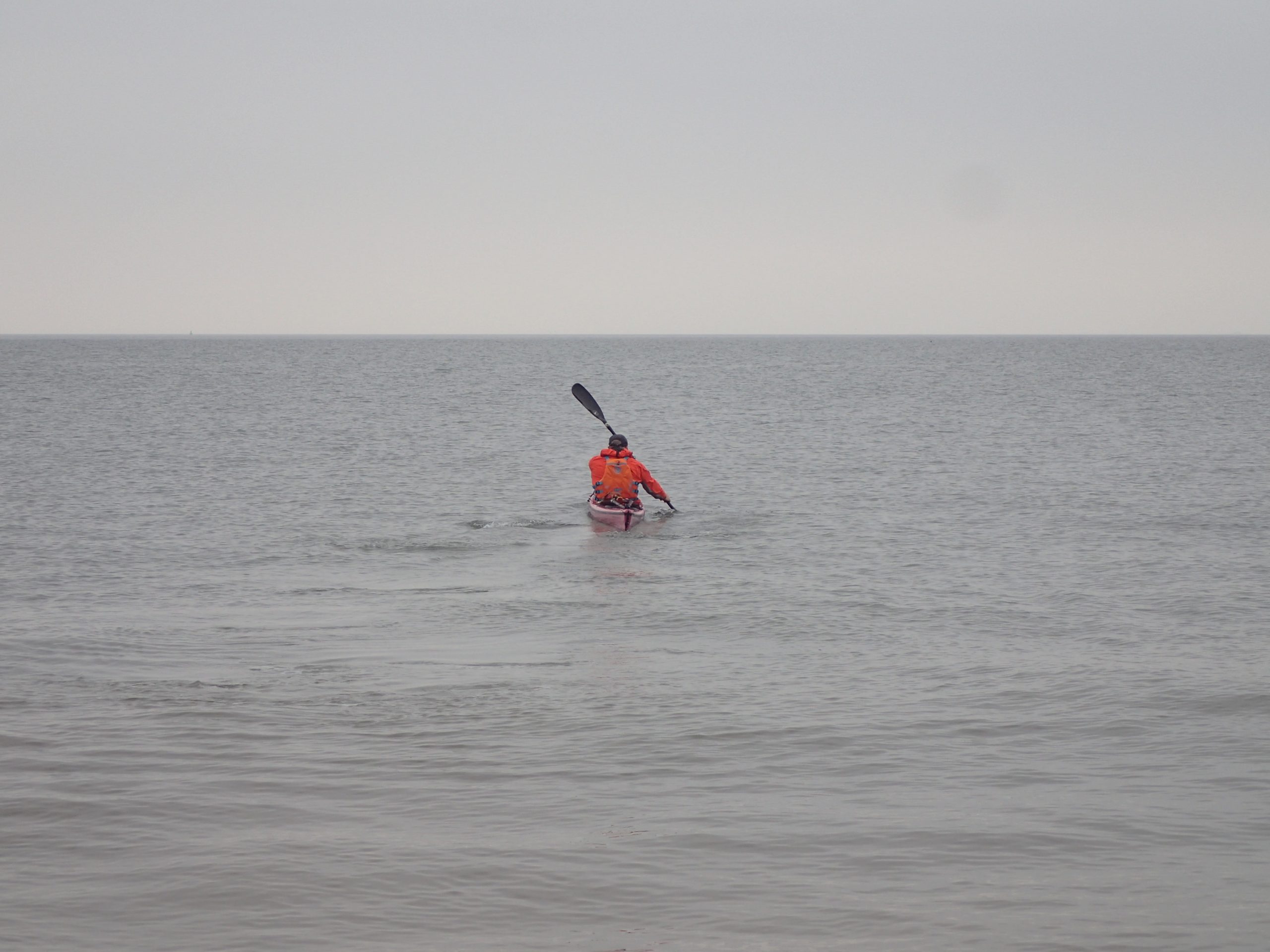 Ahh, the race – I didn’t really explain that. The Boss has volunteered (once again) for International Rescue duties and is going to meet me on Walney Island to bring me home. The AA Route Planner says it will take the Boss just over 2hrs to drive from one side of Morecambe Bay to the other. I reckon I can paddle it just under 2 hrs if all goes well. Game on.

There’s only one way to find out, so off we go. I promise not to break the speed limit if The Boss doesn’t!

It’s hazy. On a clear day ‘the sheds’ at Barrow stand-out, but there’s no sign of them today. So we are on a mix of GPS and compass. The tide is forecast to be across for some of it so we’ll go on compass and monitor drift with the GPS*.

I’m feeling good, pulling strong and the boat is gliding nicely. As I move away from Fleetwood the tide is slack then a tiny bit behind, good enough. I look around. And then as I reach the Lune Deep channel the tide goes 1 kt across/against, not ideal but not a surprise either. Hmmm, not going to beat the AA if it stays like this.

By the far side of the channel it’s worse, more than 1kt against. But then suddenly, as I pass the nicely named ‘Danger Patch’ buoy, it suddenly eases back towards slack. I’m surprised how quickly it changes in open water. I’ll think about it later though, got a job to do now. 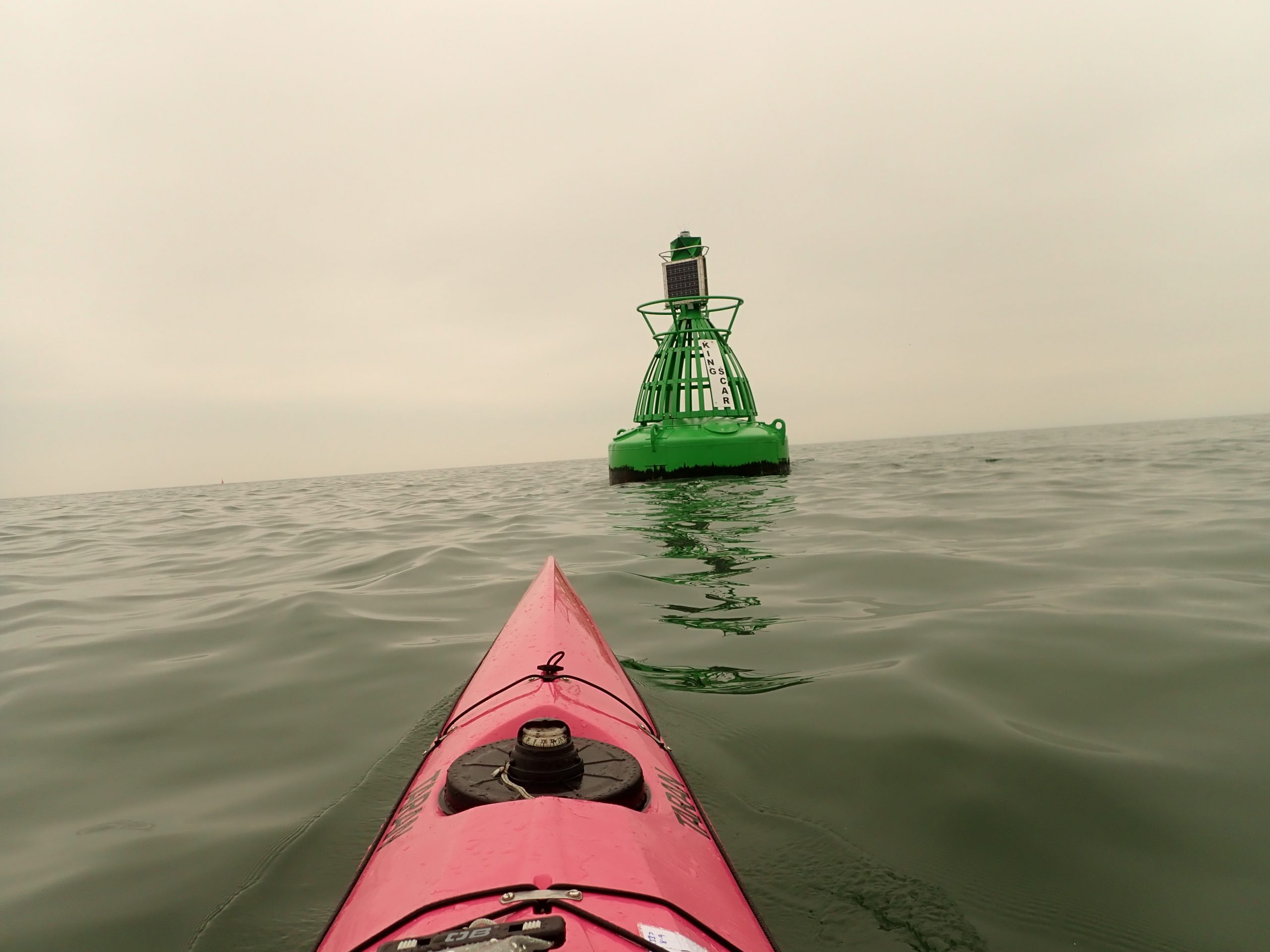 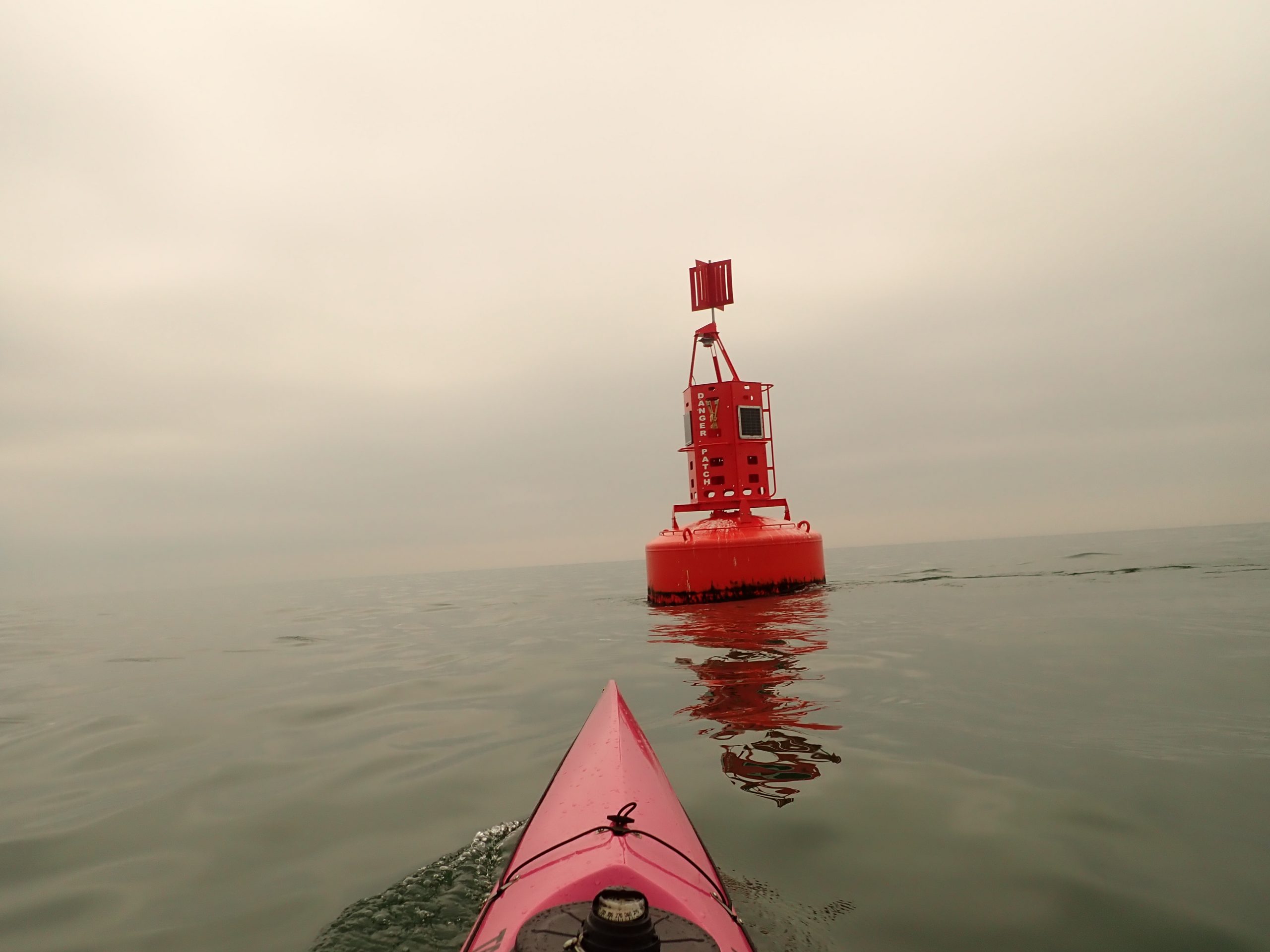 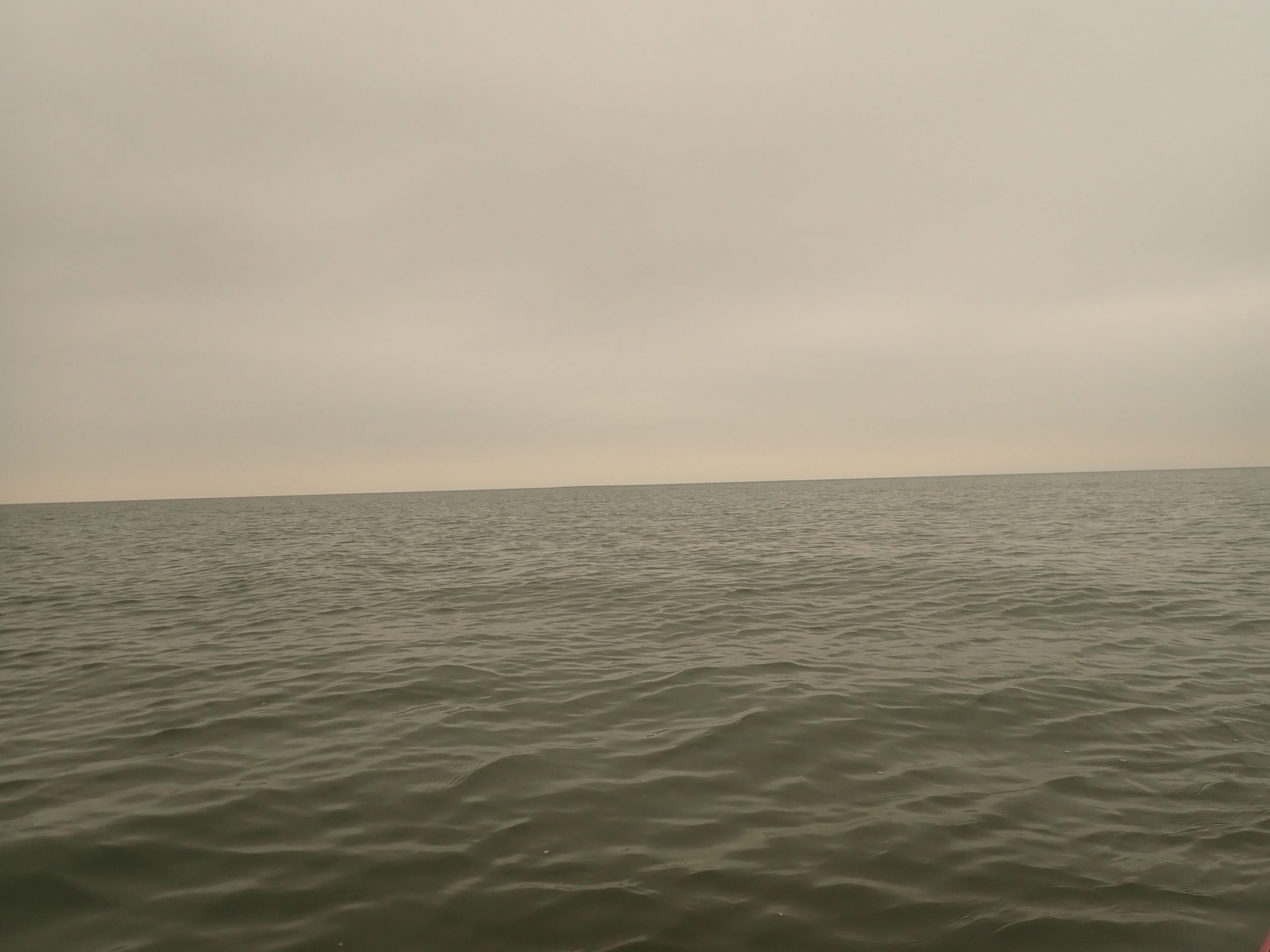 I look back. Fleetwood is low-lying and disappearing quickly as a flat silhouette. I can still make out Blackpool Tower behind, but disappointingly the fells and mountains are still lost from sight.

At the half-way mark I’m still feeling good and things are going fine. The boat is running well. The breeze is gentle and there is just a hint of a following chop that is nicely paced to help now and then.

Eventually I can make out Peel Castle ahead, followed by the south end of Walney Island. A large dredger is to the west heading parallel to me. I see it enter the Barrow channel over by Lightning Knoll (another nicely named feature) but it pulls ahead, leaving me a clear run into the beach at South End Haws. 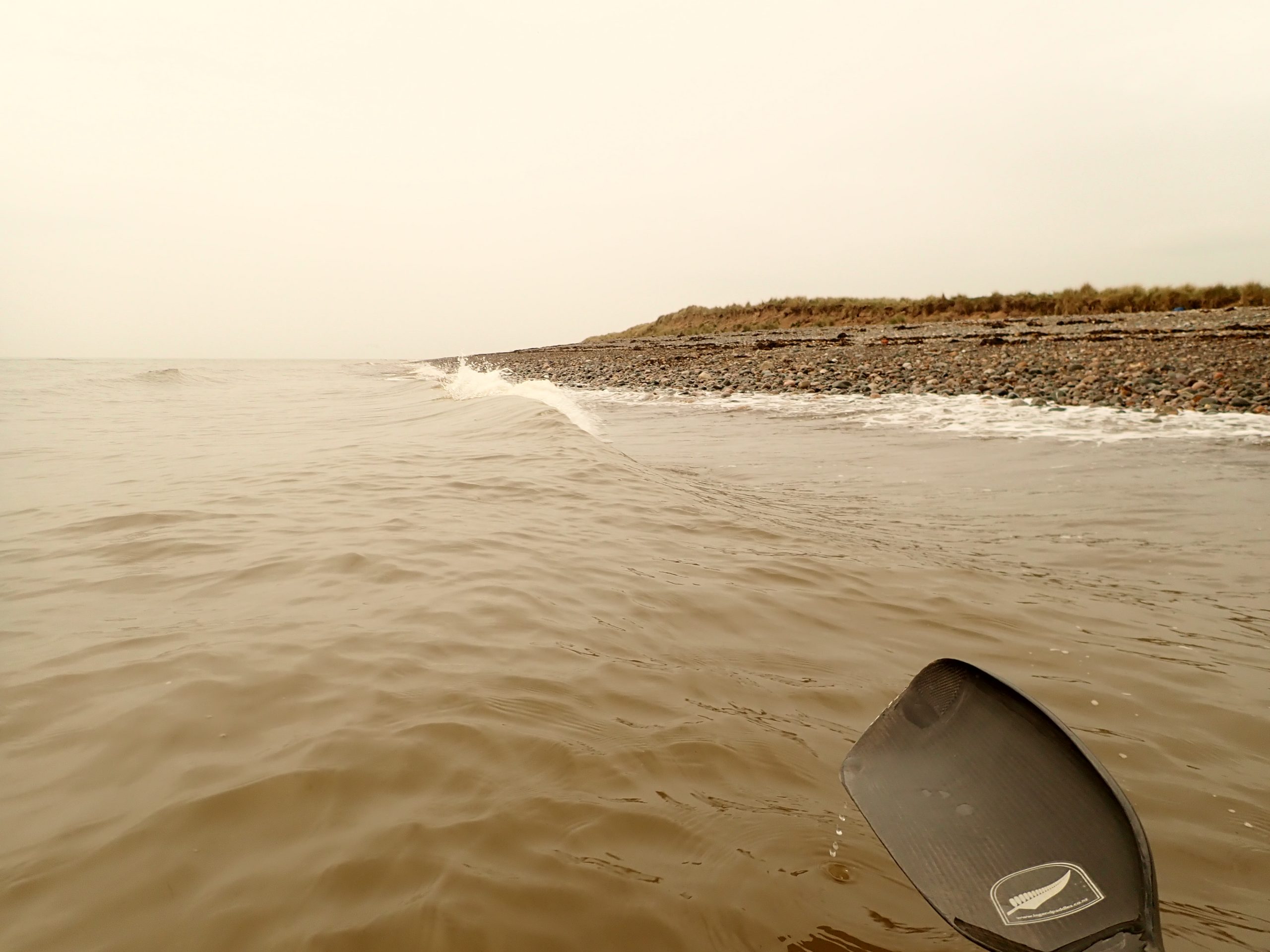 There’s a bit of a ferry required to get across as the Piel Channel has now begun to empty. But it’s no great shakes, paddled many of those in training of course.

I’m worried there may be seals on the beach, but it’s empty and Walney Island  arrives as you would expect from Walney, with little fuss. As I arrive the watch says 01:51 – the kayak beats the AA Route Planner. Nice. Hmmm, could be a new PSK Challenge maybe?

I look back to the south, and I do feel a little cheated. I’ve been looking forward to this crossing for years, and a big part of that anticipation was for the view, the scenery and to be able to look back to where you’ve come from. But it’s not to be today, that’s how it goes sometimes. 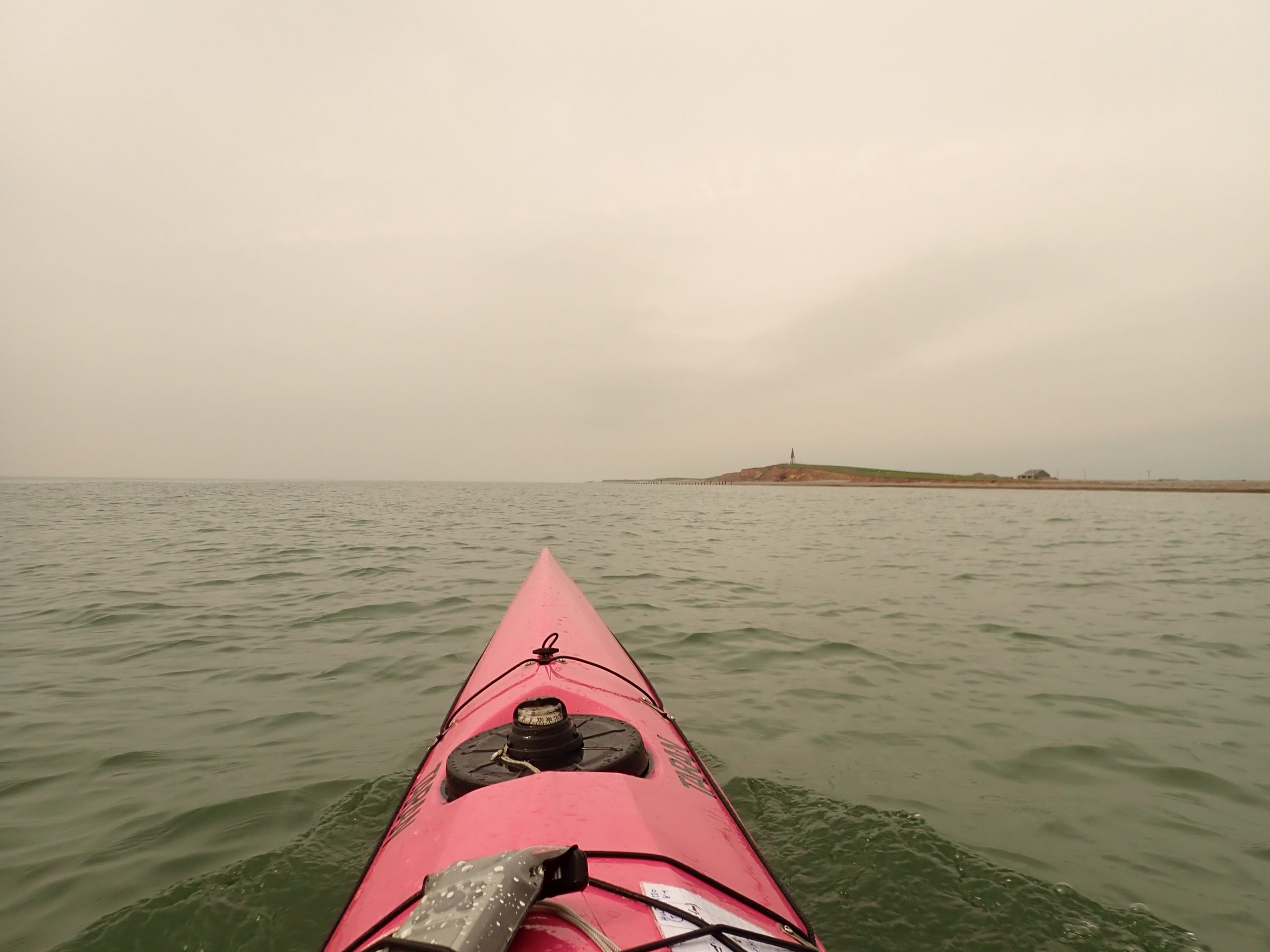 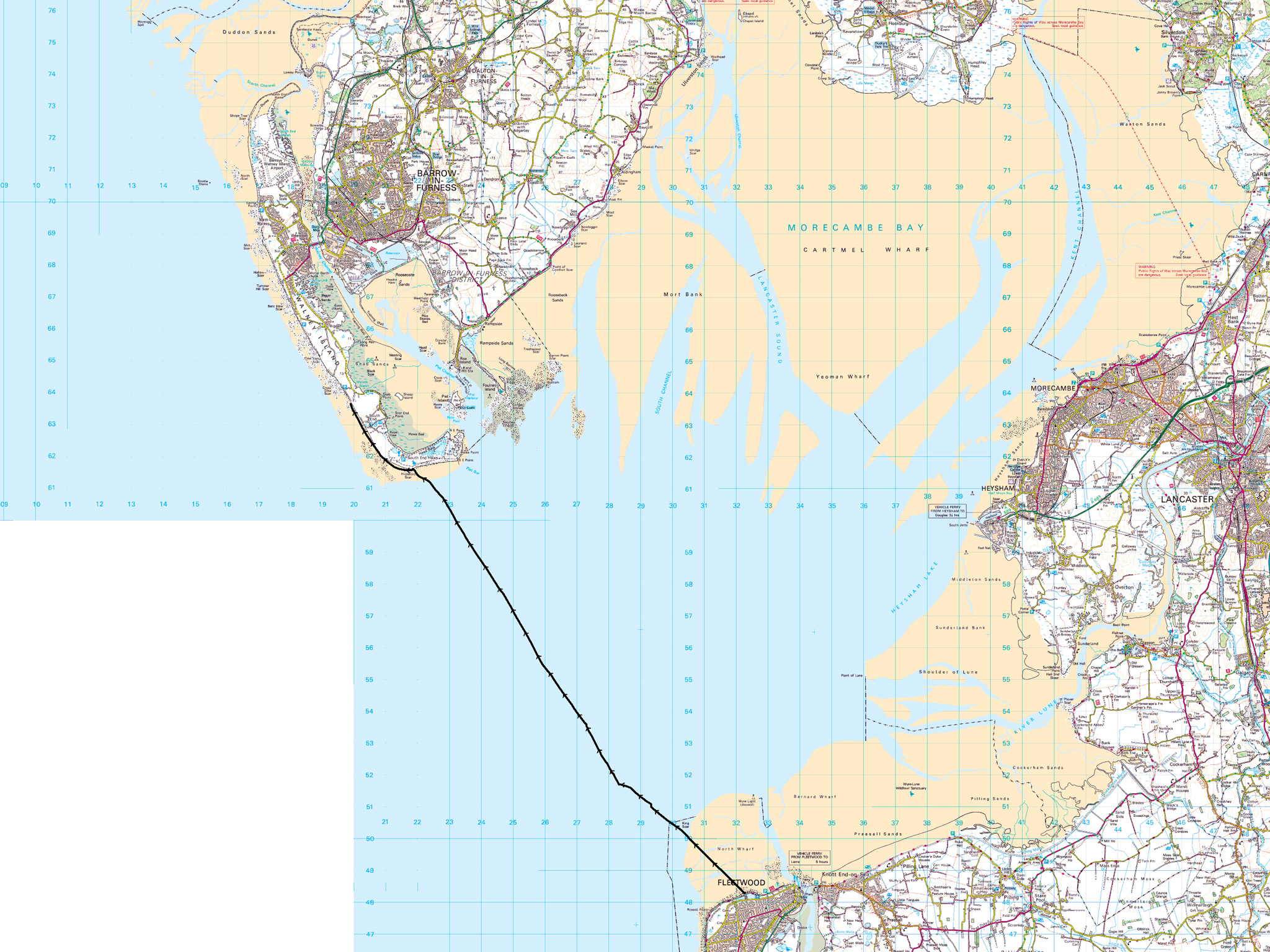 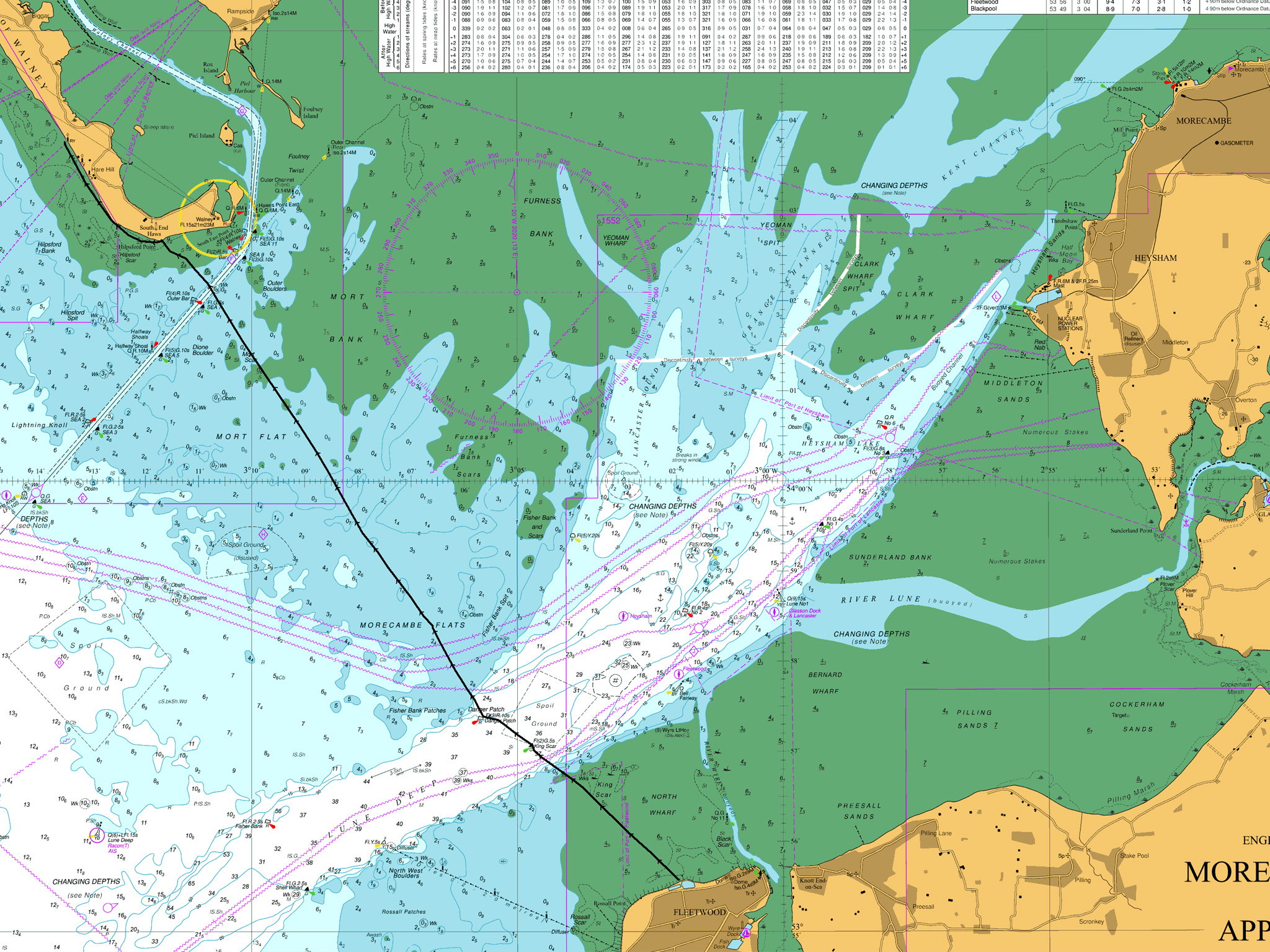 Still I’m pleased – the time is good. The planning worked, the strategy worked too, I paddled well. But the lesson for me to take away, once again, is that all that training does pay off. Once I was on the water with arms turning, all the doubts just left me.

Trust the plan, trust the training and get on with the job.

I paddle on to the get out at South End, smiling.

* There was little cross-track flow as it turned out.