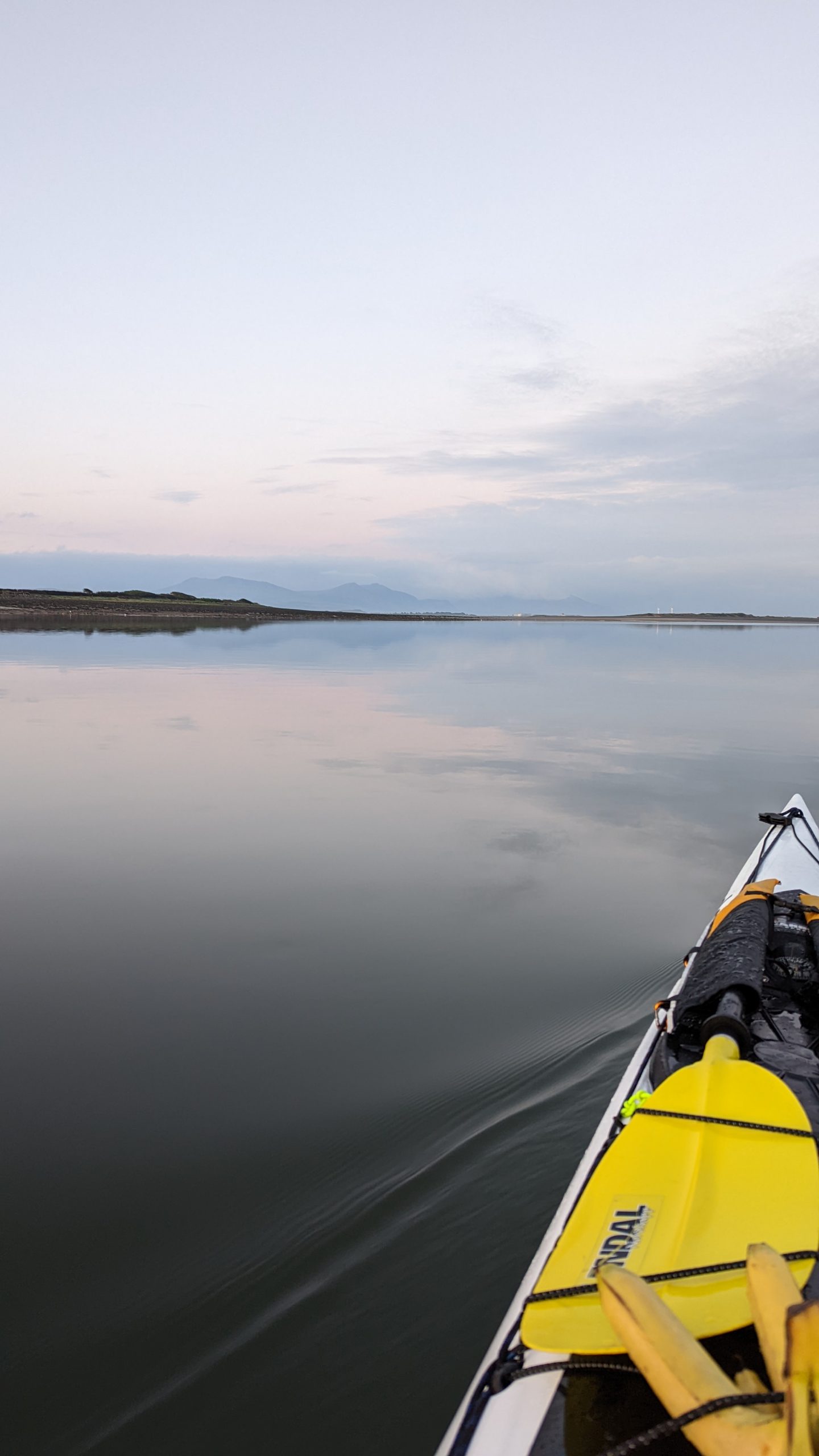 A couple of weeks earlier I had clocked up a 100km paddle on the Tamar Estuary, amounting to 13.5 hours in the saddle. Afterwards I was a bit achy but I felt that I could have done more. Later I messaged John Willacy and mentioned I was going to the Anglesey Symposium and fancied paddling around the island over a couple of days. Knowing of my Tamar trip he suggested I try and get around in a single day. That did it, a switch in my brain went click and I was on a mission.

This exchange only occurred the day before I left for the Anglesey Symposium, I was busy running around looking for camping gear not used since last year and already feeling a bit frazzled. Getting up at 6am the next day I fitted in a 2 hour planning session. I’d managed to find tidal flow diagrams on the internet and used them to mark up a route on a Landranger OS map. The plan was a 5am start from Caernarfon. I marked up the map to show where I should be on each hour, by adding my estimated base speed to the water flow rate. The plan would ensure I got past the fierce tidal flow author Holy Island and that the tail end of the trip would be in the sheltered confines of the Menai Strait.

I rose at 2am and checked the weather, which was better than I’d hoped for: light to zero wind, with adequate visibility. I was at Caernarfon by 3 and would have started early but I couldn’t see a clear channel in the low tide mudflats, I snoozed for a bit in the car.

After lots of faff I ended up started a bit late. Getting out of Sand Dune City (Abermenai Point) took forever or so it seemed. I have a new Pixel 6 waterproof phone which I was trying out. Somehow it got coated in a sticky paste of cheese slice fairly early on and didn’t work too well afterwards. I also didn’t want to waste time to keep repositioning the paper map in its case, consequently I only had a very rough idea of where I was most of the time (my spare phone was in the back hatch as my day hatch was crammed with masses of food).

I wasn’t aiming for a good time, I just wanted to finish under my own stream. However it was a race against the tide and so I was paddling relentlessly – go, go, go, no messing about the whole time. I had no worries other than ‘Would I make it?’

Going around the Holy Island, South Stack and North Stack was great, it was almost flat but I could feel all that power surging beneath me. I was clocking 17km/hour and very happy. I got a shock having rounded North Stack as my speed dropped to 6k, I saw later that the flow is into the harbour rather than towards the distant headland I was aiming for. The flow did pick up soon and as I headed for Carmel Head I was doing 12km/hour, but I knew I should have been doing 16km/hour.

A powerful notion that I should fail first hit me as I paddled towards Wylfa Nuclear station on the North coast. The current was racing against me and I was only doing 3k, this should not have been happening, but no point denying it. I started imagining returning to the Symposium with my tail between my legs.

Once I had scraped past the station going got a lot easier. I crossed the indented bays easily interspersed with a bit of excitement as I sprinted between eddies round the headlands. With minimal swell I could get up real close to the cliffs to minimise the counter flow. All the time I kept thinking the next headland is going to do for me. Gradually one by one I ticked off the three mouse’s (rocky islands). The North coast is rugged and scenic and the surroundings raised my spirits, but the thought of Point Lynas – the gateway to the east coast kept nagging away.

As it turned out Point Lynas was not a problem, I began to have hope I might finish after all, my head was in a good place. However, by the time I had slogged very slowly past Ynys Dulas against a wide adverse flow, I was having doubts again, I wasn’t expecting that section to be so sticky. 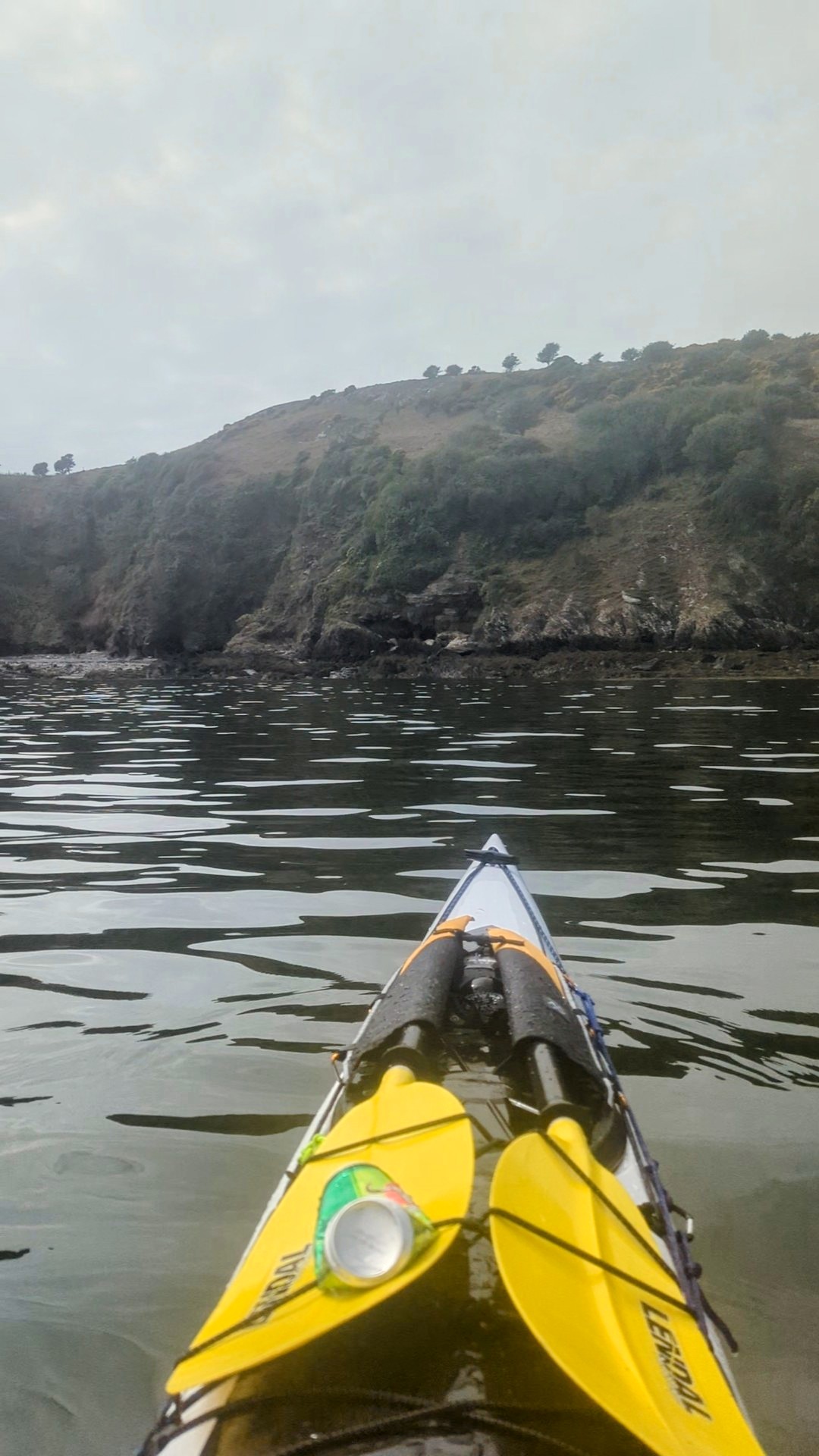 Now for a low point, I mistook Ynys Moelfre for Puffin Island. I was very happy and hammered past it, thinking that somehow I had recovered 3 to 4 hours – I was a hero. I thought Moelfre was probably Beaumaris and I mistook the east end of the island for the mainland. I finally figured out that I was going to come in 20km short of the expected total distance, got Google maps working and found my true position. Oh super fudge! (You can see the sudden change of direction on the east part of my GPS trail).

Luckily rather than bursting into floods of tears, I found my error so amusing I just chuckled to myself. Miraculously my vista transformed, a hill on the mainland became an island. I corrected my course and pushed on. By this time I’d been paddling non-stop for about 10 hours.

The final approach to Puffin Island seemed to take forever. The wind had dropped to nothing and there were large flocks of razor bills floating around with their squeaky calls. The grey expanse of water with mountains in the backdrop was calming.

Having finally, finally got into the straights I made my first stop and got out the old phone. It was slack water, low tide, all I had to do now was to paddle the entire length of the Menai Strait against the tide. I had no idea whether I would make it, but I sure wasn’t stopping until something made me.

Again it seemed like forever before I got to Bangor Pier, which put me back on the edge of my paper map, the final page, a great psychological boost. The whole approach to the bridges was surprisingly good going, I stuck to the right bank and was making a steady 6km, I was back in civilization and there was plenty to look at to keep me amused.

Eventually I made it to the Menai Bridge. I could see the water was tanking along under the main arch. Now or never, this was the final gateway. I stuck hard right again, broke in and paddled like crazy, pulled into the pool. Then, slow and steady, I crept along as the light rapidly failed. I had now been paddling for over 15 hours. Having got past the island I figured I’d be past the worst, I just needed to get through the Britannia bridge before it got pitch black. It was 9.30pm by the time I got to Nelson’s statue, and night had truly fallen.

There was no moon, no wind and light cloud. I could plainly see the reflection of the trees lining the banks on the surface of the water but not much else. I now took my watch off my wrist as it was lighting up on every stroke and I didn’t want the battery to run out now that I’d made it this far. This meant I didn’t know my true speed. I told myself it didn’t matter as long as I was gaining ground.

It was a beautiful night, I was just warm enough and my various aches weren’t getting any worse, so on I slogged, no thoughts of giving up now. I realised as I approached Caernarfon that I had been paddling the straits for so long that the tide had turned my way!

When I finally got to the car it was almost bang on midnight. The whole business of changing and packing and getting the boat on the roof as I stumbled around in the cold and dark, on some very rough ground was harder than the paddling.